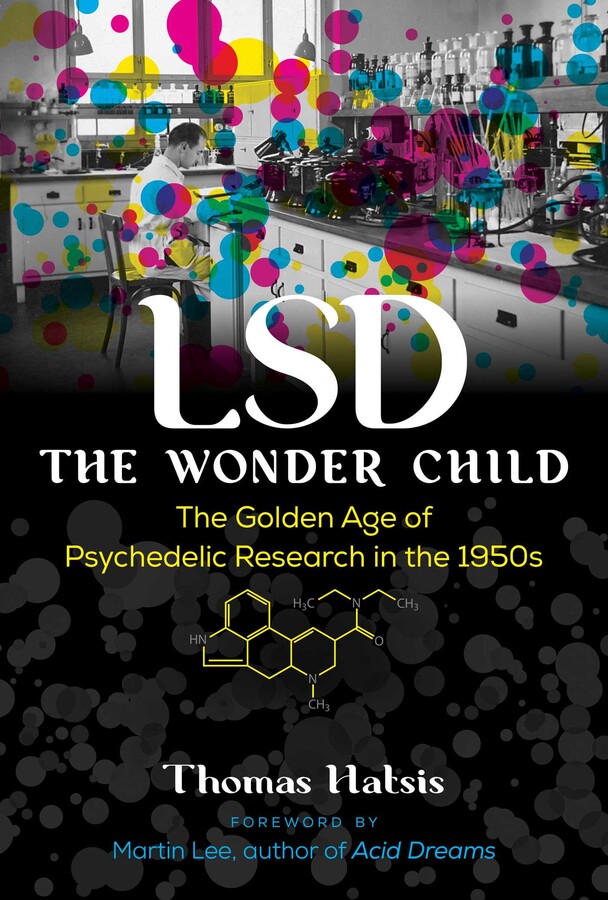 The Golden Age of Psychedelic Research in the 1950s

• Reveals how intellectuals, philosophers, artists, and mystics of the 1950s used LSD to bring ancient rites into the modern age

Exploring the initial stages of psychedelic study in Europe and America, Thomas Hatsis offers a full history of the psychedelic-fueled revolution in healing and consciousness expansion that blossomed in the 1950s--the first “golden age” of psychedelic research.

Revealing LSD as a “wonder child” rather than Albert Hofmann’s infamous “problem child,” the author focuses on the extensive studies with LSD that took place in the ’50s. He explores the different groups--from research labs to the military to bohemian art circles--who were seeking how best to utilize LSD and other promising psychedelics like mescaline. Sharing the details of many primary source medical reports, the author examines how doctors saw LSD as a tool to gain access to the minds of schizophrenics and thus better understand the causes of mental illness. The author also looks at how the CIA believed LSD could be turned into a powerful mind-control weapon, including a full account of the notorious top-secret program MKULTRA.

Reintroducing forgotten scientists like Robert Hyde, the first American to take LSD, and parapsychologist Rosalind Heywood, who believed LSD and mescaline opened doors to mystical and psychic abilities, the author also discusses how the influences of Central American mushroom ceremonies and peyote rites crossbred with experimental Western mysticism during the 1950s, turning LSD from a possible madness mimicker or mind weapon into a sacramental medicine. Finally, he explores how philosophers, parapsychologists, and mystics sought to use LSD to usher in a new age of human awareness.

From Chapter 5. The Great Lips
The Life Giving Spirit
~ December 1952 ~

Deputy Medical Superintendant at Powick Hospital in Worchester, England, Dr. Ronald Sandison understood the odd predicament in which he found himself. He had just returned home from Sandoz with a box of Delysid that December. While LSD held no negative connotations back then, many therapists nonetheless still frowned upon the use of medicine--any medicine--as an adjunct in psychotherapy. Sandison knew that substances like LSD stood “in relation to orthodox psychiatry, rather as alchemy in the time of Galen stood to medical treatment.”(1) The great Carl Jung, as one example, frowned upon LSD therapy.(2)

Powick seemed an odd location for LSD experiments. Built in 1852 with a 200 patient capacity, the hospital housed 1000 people by the time Sandison arrived that September 1951 to take his new position as consultant psychiatrist. . . . Sandison went right to work updating the facilities, hiring additional staff, creating outpatient treatment centers, etc. He also introduced a new form of evaluation for those who came to reside at Powick--psychotherapy. It took him an entire calendar year to get the place up to snuff, but by September 1952 Powick had been transformed (at least bureaucratically--it was still a drab, Dickensian nightmare). By December the hospital could function soundly from its own well-oiled inertia, granting Sandison the freedom to accept an invitation from Dr. Isobel Wilson to tour mental hospitals in Switzerland.

At the beginning of their tour they made two visits--not to a hospital, but to a laboratory, Sandoz Pharmaceuticals. On their first visit, Sandison and Wilson met with Drs. Cerletti and Bircher; on their second, they met with Albert Hofmann. Hofmann noticed Sandison’s excitement with LSD and was receptive, gifting him copies of the few published papers regarding the strange new chemical. Most importantly, Hofmann also entrusted Sandison with a box filled with 100 ampoules of pure Sandoz LSD.

Returning to Powick, Sandison began clinical experiments with LSD. Working only with two others--Drs. Arthur Spencer and Whitehall--Sandison had no overseer and could therefore test Delysid for Sandoz’s two stated purposes: to plumb the subconscious mind for materials that could then be discussed in therapeutic settings; and to give doctors insight into madness. Sandison was game for both--only his natural introversion led him to ingest Delysid only three times.

Based on the Sandoz recommendations, Drs. Sandison, Spencer, and Whitehall quickly set about developing a protocol for administering Delysid to patients. The first step seemed self-evident: use a less-powerful drug to introduce each patient to the concept of medicated-assisted therapy. Pentothal, an anti-anxiety drug, would serve this purpose. Once the patient graduated from pentothal, they received a starter dose of .25 milligrams of Delysid, which would be increased two or three times a week; under careful observation, each patient would up their dose until either the correct amount was individually gauged or the test was terminated--this process usually taking from two to four weeks. Once the doctors deemed Delysid safe for further treatment, a patient might take their “active” dose upwards of 40 times. They even allowed one patient to take LSD at home; another was administered a whopping 400 micrograms!

The first major study at Powick involved 36 hospitalized “psychoneurotic” patients who took LSD over the course of one year. The program yielded some initial insights. Firstly, the doctors found no correlation “between the duration of the illness and the number of treatments required.” In other words, whereas a couple of LSD sessions might cure a severe case of psychoneurosis, more mild cases might take months of intensive psychedelic psychotherapy. There was no way of telling what particular circumstances would lead to a fast recovery or a deeper descent into despair. Sandison also determined that “material of value” only started to come through in their patients after four or five LSD sessions--whether severe or mild.(6)

At some moments, Sandison could sound downright mystical. Take his description of a woman who, after ingesting Delysid, seems to have tripped something inside her that burned for something beyond material existence. Sandison writes that she developed “a great hunger and thirst, a craving from something she knew not what.” Eventually this manifested in desires for “mother-love and the need for the life giving spirit.” Delysid caused her to “come alive … she had a great sense of mind and spirit.”(7) Another patient, who “was tortured with all sorts of obsessions regarding water,” had finally found relief from her compulsion. Driven to perform lengthily “washing rituals” that could take up to eight hours to complete, she had been free of such habits for at least two years after her LSD treatment.(8)

The original 36 patients eventually grew into 90, with “most encouraging” results: 55% recovered and stayed well; 12% showed no improvement at all; the remaining 23 showed “various degrees of adjustment compatible with a reasonable life outside the hospital.”(9) Sandison and the team noticed “early in the LSD studies … three types of LSD experiences.” One type included “[g]eneralized nonspecific images …coloured [sic] patters and other hallucinatory experiences of the non-personal kind.” Another kind was typified by “the experiencing of archaic, impersonal images … of the collective unconscious.” But the experience that intrigued the doctors the most was the way the majority of their patients relived or recalled birth trauma.(10) For some women, this form of trauma manifested in birth pangs, as if they were delivering an invisible child into the world. For others, this included re-experiencing birth.

It all reminded Sandison of “the recognition by many religions of the importance of re-birth.”(11) Psychonauts today are all too familiar with the “death/rebirth” experience, but things were not so obvious in the early 1950s, as the doctors were still working in a “model psychosis” paradigm.
Thomas Hatsis

Thomas Hatsis is a historian of psychedelia, witchcraft, magic, pagan religions, alternative Christianities, and the cultural intersection of those areas, who holds a master’s degree in history from Queens College. The author of The Witches’ Ointment and Psychedelic Mystery Traditions, he runs psychedelicwitch.com, a site dedicated to promoting the latest and best information pertaining to the Psychedelic Renaissance. He lives in Portland, Oregon.

The Golden Age of Psychedelic Research in the 1950s