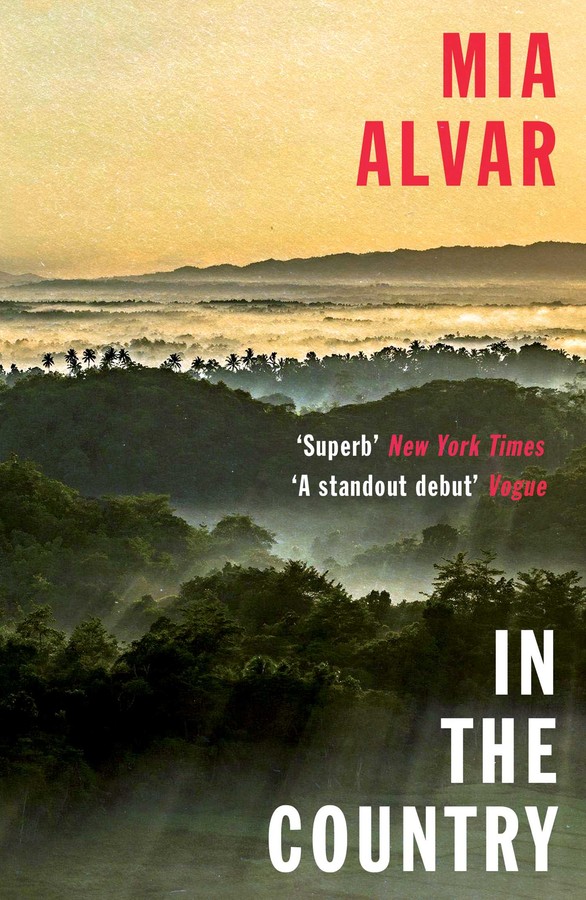 Mia Alvar was born in Manila and grew up in Bahrain and New York City. Her work has appeared in One Story, The Missouri Review, FiveChapters, The Cincinnati Review, and elsewhere. She has received fellowships from the Lower Manhattan Cultural Council, Yaddo, and the Djerassi Resident Artists Program. A graduate of Harvard College and the School of the Arts at Columbia University, she lives in New York City.

‘With arresting imagery and characters that are intriguing beneath their seeming ordinariness, these are powerful tales that evoke a sense of place, while exploring identity and displacement’.

‘Remarkable… Each of these nine stories is superb.’

‘A stunning debut – without ever getting overly sentimental, page after page of In the Country is laced with... revelatory, unflinching truth… Mia Alvar comes out swinging for the fences in her powerful first story collection... and doesn’t ever let up.’

'It’s hard to believe that In the Country is Mia Alvar’s debut: her diamond prose sparkles so brightly and cuts so deeply.’

– Celeste Ng, author of Everything I Never Told You

‘So assured and so wise, these stories feel like classics already.’

– Karen Thompson Walker, author of The Age of Miracles

‘A writer with enchanting powers.’

‘Compulsively readable…thanks to Alvar's expansiveness and her gift for grounded, human-scale metaphors…Each of In the Country's nine stories about the Filipino diaspora has the satisfying heft of a little novel. In precise and patient prose, Alvar reveals the complex patterns of labour migration that structure and define her characters' most intimate relationships.’

‘Summer’s standout debut is Mia Alvar’s peripatetic story collection, In the Country, which captures a global village of voices—a blue-eyed fashion model in Manila; a nanny in gilded Bahrain—with a ventriloquist’s ease.’

‘Emotionally ambitious…Alvar hits the ground running…What will make readers want to remain in the tired and sad company of Alvar's workers and wanderers is her own gorgeous writing style. Each one of the nine stories in this collection riffs on the theme of exile; yet, every main character's situation is distinct, morally messy in a different way, and unpredictable. Alvar is the kind of writer whose imagination seems inexhaustible, and who stirs up an answering desire in her readers for more and more stories…Alvar is reportedly working on a novel…which is great news, because as a reader and a new fan, I want more and more and more.’

‘In the Country consists of nine stories, all told from the perspectives of men and women in the Filipino diaspora. Emigration and escape from a place, a secret, or reality itself is a common theme…Raveling around the world, what Alvar’s stories have in common is the boldness and sincerity of heart that lie in the center of all of them.’

‘In the Country is filled with graceful, carefully crafted stories—each one a world unto itself. I was so happy to see this collection, as I’ve been a fan of Mia Alvar’s from the start.’

‘Haunting and powerful…Extraordinarily adept and insightful…[Alvar] moves gracefully among Philippine cultural iconography and Tagalog, Bahraini class structure, American anachronisms, shifting gender and sexuality, and political histories…The title story, ‘In the Country,’ and the longish ‘Old Girl’ stand out as evidence of Alvar's sensitive gaze, literary talent and polycultural dexterity…Alvar is gifted; of that there is no doubt. And she has important things to say. She knows how to make the reader pause, and think deeply, feel. And hunger, as I am already, for more.’

‘Alvar’s rich debut provides a deep and textured look at Filipino culture at home and abroad from an array of vastly diverse vantage points…Through careful, delicate prose, Alvar reveals her characters’ pasts and desires, which range from saintly to shameful in this deeply religious culture…Alvar’s characters are engaging and memorable, and their homes swell with visceral smells and sounds as she places us gently, firmly, into their imperfect lives.’

‘[An] accomplished debut of longing and redemption. In lush, sinuous sentences, Alvar probes the enduring stain of race, colonialism, and especially class, giving voice to all strata of Philippine society.’

‘Superbly affecting…Nine stories, all of them so smoothly and successfully realized that it seems incredible that this volume is [Alvar’s] fiction debut…[Her] speciality [is] the smart depiction of lives lived between two worlds…[Alvar has] a range that would be the envy of authors with 10 books under their belts.’

‘Alvar’s debut story collection is so well-drawn and plot-rich that you almost wish it were a novel. But then Alvar wouldn’t have been able to cram in so many disparate voices and painful ironies: a New York pharmacist smuggling drugs on flights back home to palliate his dying father; a set of housewives in Bahrain who throw parties for their poorer landspeople; an office cleaner in the World Trade Centre in the summer of 2001.’

– New York Magazine, “7 Books You Need to Read This June”

‘Magnificent…Debut story collections don’t come much better than this. In the eight complex tales and one ambitious novella of In the Country, Filipina-American author Mia Alvar proves herself a tough, sophisticated writer with a canny empathy for the quandaries that confront her intricately layered characters.’

‘Perfect for anyone who thinks they can’t get down with short stories…While the subject matter is indeed fresh, the real appeal belongs to the lush sentences, rapid pacing, and morally conflicted characters. The last and title story is a novella-length tale that Alvar is reportedly using as fodder for a novel. We can only hope.’

‘It's difficult to reduce Alvar's stunning short story collection to just one idea…Alvar finds beauty in the unlikeliest of places, and that's what makes In the Country such an inspired, remarkable book. Her characters, even the lucky ones, are never far from affliction, and never really close to home, even when they've lived in the same place their whole lives. Alvar finds triumph in the torment and deliverance in the agony [an] impressive debut.’

‘These are rich, meaty, fulfilling stories in which everyone’s hiding something—from extramarital affairs to murder…Alvar brings to light the individual experience, giving a human face to struggles large and small. Despite the darkness, Alvar’s prose satisfies. It’s the author’s narrative ability—her power to surprise and weave thoughtful, intricate stories—that keeps you reading. Her writing both memorializes and celebrates the lives of anyone who has ever suffered—that is to say, of us all.’

‘Alvar’s openings are so skillful that you can’t help wanting to know what comes next…You want to know who these people are, telling you their stories in seductive first-person voices…Alvar’s stories feel as richly imagined as any novel; like Alice Munro, she can convey an entire life in only a few pages, and she also sees the deep connections between people of difference classes and backgrounds. I can’t wait to see what she does next.’ Laurie Muchnick

‘Stunning…each story feels as rich, as deep, and as crafted as a novel. Equally impressive is the confident fluidity with which Alvar moves from Manila to Bahrain to Tokyo, from 1971 to 1986 to the 21st century…Throughout Alvar’s stories, the language is as elegant as it is durable, while the lines of class, race, gender, and history are both blurred and crystallized.’

‘Mia Alvar’s In the Country is a moving collection of stories about the men and women uprooted by the Filipino diaspora. Spanning multiple countries and time periods, Alvar’s illuminating, heartbreaking stories reveal just how universal loss and displacement can be.’

‘Mia Alvar's graceful and gutsy stories are rich with an all-too-rare quality in fiction: a keen sense of the wider world and how the searching, indelible characters that populate this collection fit within it. In the Country is a spectacular debut from a vital new talent.’

– Laura van den Berg, author of The Isle of Youth and Find Me

‘With a lyrical grace similar to the stories [of] Jhumpa Lahiri and a psychological acuity we find in Yoko Ogawa’s novellas, here is a talented new voice named Mia Alvar. The stories she’s written are the kind that can make a difference, the kind that can hold a fist up to your heart without letting go of their hold on you: the kind with a light inside of them, whispering all the while, ‘This is life. This is my heart and mind in the world.’ An extremely promising debut.’

‘A superb debut collection that reads like the work of a seasoned writer. Mia Alvar illuminates the lives of her characters with such penetrating insight, wisdom, and compassion that it’s impossible not to experience their struggles and aspirations as your own. Even as it satisfies, In the Country leaves the reader hungry for more from this gifted, sensitive storyteller.’

– Sigrid Nunez, author of The Last of Her Kind

‘In the Country is an absolutely beautiful book—generous and heartbreaking, empathetic and insightful. Mia Alvar is an incredible storyteller, patient, assured and in utter control—every one of the endings in this gorgeous debut knocked me flat. A truly extraordinary collection of stories—I loved it.’

– Molly Antopol, author of The UnAmericans

‘Few writers, even the most seasoned, can produce collections of evenly superb stories. Mia Alvar triumphs on her first try…Both intrepid readers and armchair tourists eager to explore debut narratives that straddle multiple countries and cultures—à la Violet Kupersmith’s The Frangipani Hotel or Rajesh Parameswaran’s I Am an Executioner—will be opulently rewarded here.’

‘Alvar delves into the multifaceted immigrant experience, one compassionately drawn perspective at a time.’

‘Through stories set all over the globe, newcomer Mia Alvar imagines the lives of the Filipino diaspora. Her sprawling collection digs into the Philippines’ complicated history during the ’70s and ’80s.’

‘Complex and irresistibly fascinating. . . . Not a single word is misplaced in these narratives, which are masterpieces of immersive classical storytelling, even as they surprise you and evade expectations. Whether you’re knowledgeable about the history of the Philippines or not, In the Country will give you a deep insight into the characters it follows, both imagined and taken from reality.’

‘A rich and varied collection…[Alvar] capture[s] that peculiar blend of excitement and pain that comes with uprooting oneself from a specific place or idea…A vivid debut that deserves to catch the interest of prize committees.’

‘In the Country is like no book of stories I’ve ever read and I loved it deeply. There is not a single weak spot in this collection. Each story has characters with complex inner lives and at least one serious moral dilemma. . . . I loved it more than I loved many, many novels and I still can’t believe a collection of stories affected me so strongly. Alvar is an astounding writer.’

‘[Alvar’s] prose is gorgeous and propulsive, always in forward motion as if the story cannot be rooted too long in a single place. In Mia’s work, as in her life, it seems, movement is only natural.’