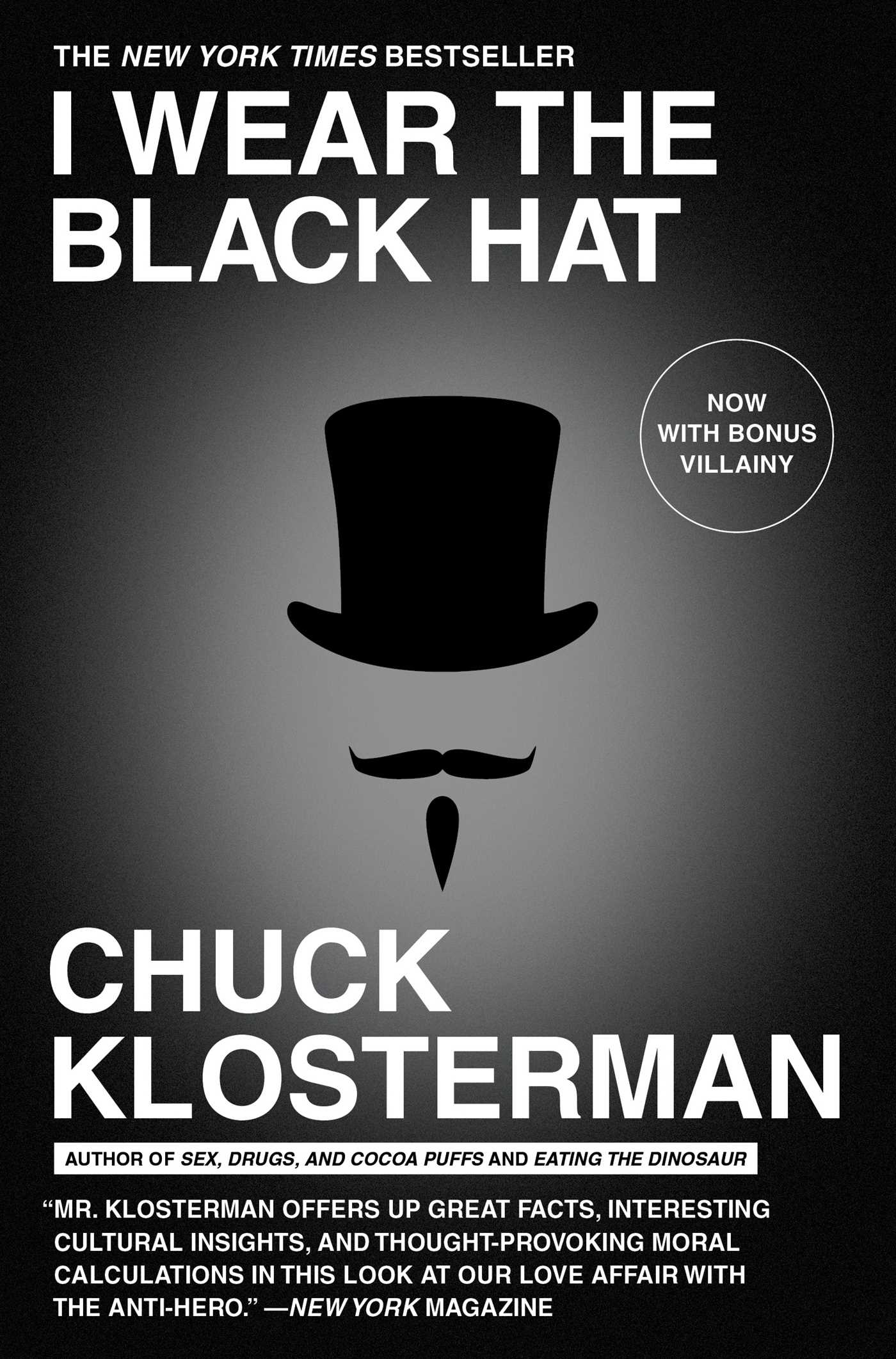 I Wear the Black Hat

Grappling with Villains (Real and Imagined)

Chuck Klosterman, “The Ethicist” for The New York Times Magazine, has walked into the darkness. In I Wear the Black Hat, he questions the modern understanding of villainy. When we classify someone as a bad person, what are we really saying, and why are we so obsessed with saying it? How does the culture of malevolence operate? What was so Machiavellian about Machiavelli? Why don’t we see Bernhard Goetz the same way we see Batman? Who is more worthy of our vitriol—Bill Clinton or Don Henley? What was O.J. Simpson’s second-worst decision? And why is Klosterman still haunted by some kid he knew for one week in 1985?

Masterfully blending cultural analysis with self-interrogation and imaginative hypotheticals, I Wear the Black Hat delivers perceptive observations on the complexity of the antihero (seemingly the only kind of hero America still creates). As the Los Angeles Times notes: “By underscoring the contradictory, often knee-jerk ways we encounter the heroes and villains of our culture, Klosterman illustrates the passionate but incomplete computations that have come to define American culture—and maybe even American morality.” I Wear the Black Hat is a rare example of serious criticism that’s instantly accessible and really, really funny.

Chuck Klosterman is the bestselling author of many books of nonfiction (including Sex, Drugs, and Cocoa Puffs, I Wear the Black Hat, Fargo Rock City and Chuck Klosterman X) and two novels (Downtown Owl and The Visible Man). He has written for The New York Times, The Washington Post, GQ, Esquire, Spin, The Guardian, The Believer, Billboard, The A.V. Club, and ESPN. Klosterman served as the Ethicist for The New York Times Magazine for three years, and was an original founder of the website Grantland with Bill Simmons.

“That most of his subjects are from the pop-culture realm, whether Andrew Dice Clay or Chevy Chase or the Eagles, does not diminish the underlying sophistication of Klosterman’s guiding questions…. A fine return to form for Klosterman, blending Big Ideas with heavy metal, The Wire, Batman and much more.”

“Very much a product of his generation and as plugged into the popular culture as Mencken was antagonistic to it, Klosterman is in that same direct line of cultural critics as Bierce, Mencken, and more recently, P. J. O’Rourke, and his posture is similarly arch and iconoclastic…[I Wear the Black Hat] will amuse and/or outrage but, either way, it should enlarge his audience.”

“Klosterman offers up great facts, interesting cultural insights, and thought-provoking moral calculations in this look at our love affair with the anti-hero.”

"Masterfully blending cultural analysis with self-interrogation and imaginative hypotheticals, I Wear the Black Hat delivers perceptive observations on the complexity of the antihero (seemingly the only kind of hero America still creates). I Wear the Black Hat is a rare example of serious criticism that’s instantly accessible and really, really funny."

"Klosterman has a knack for holding up a magical high-def mirror to American pop culture that makes all of our vanities and delusions look painfully obvious. Spend enough time reading I Wear the Black Hat, and you might even start to recognize, in its pages, your own silly assumptions, your snap judgments, your stubborn loyalties and your badly rationalized prejudices….By underscoring the contradictory, often knee-jerk ways we encounter the heroes and villains of our culture, Klosterman illustrates the passionate but incomplete computations that have come to define American culture — and maybe even American morality."

"A gleeful and often funny explanation of villainy, both fictional and real."

"Klosterman considers how inconsistent, unpredictable and surprisingly elastic the concept of villainy has been in American culture since the 1970s....the entertainment value of his thought processes and the quality of his prose are high."

“With the aplomb of a modern Machiavelli surveying our ever shifting moral landscape for examples that prove his point, Mr. Klosterman takes the reader on a grand tour of villainy's outposts in popular culture, sports, politics and American history. "I Wear the Black Hat" is an erudite, provocative and playful survey of the ever shifting face of villainy in the American experience.”

"Klosterman attacks his subjects with intellectual rigor and humor... you should read this thought-provoking book."

“[Klosterman’s] best work since Sex, Drugs and Cocoa Puffs….If you’ve ever sympathized with Darth Vader, second-guessed Muhammad Ali or wondered how Bill Clinton got away with what he got away with, you’re not alone. Read I Wear the Black Hat and see for yourself.”

I Wear the Black Hat

Grappling with Villains (Real and Imagined)