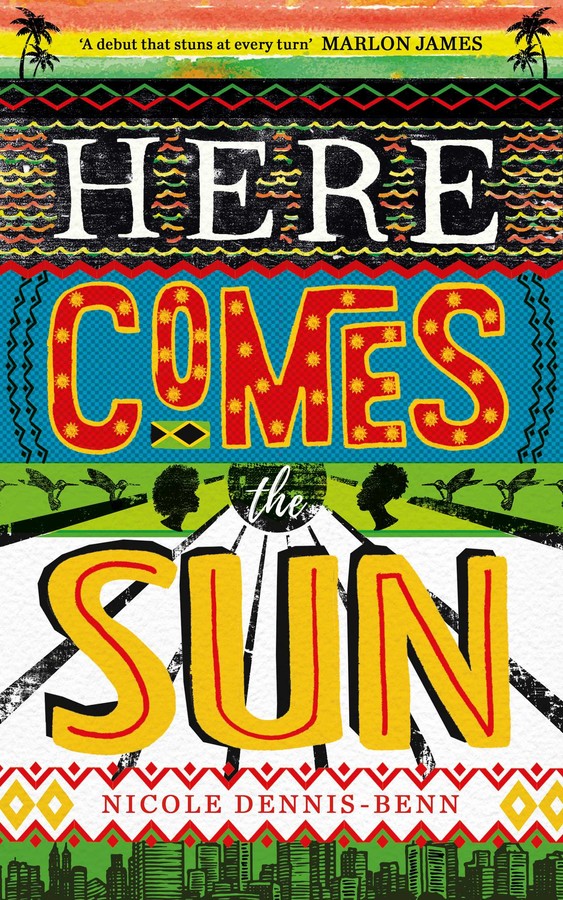 A finalist for the New York Public Library Fiction Award

A Grand Prix Littéraire of the Association of Caribbean Writers Selection

In this radiant, highly anticipated debut, a cast of unforgettable women battle for independence while a maelstrom of change threatens their Jamaican village.

Capturing the distinct rhythms of Jamaican life and dialect, Nicole Dennis-Benn pens a tender hymn to a world hidden among pristine beaches and the wide expanse of turquoise seas. At an opulent resort in Montego Bay, Margot hustles to send her younger sister, Thandi, to school. Taught as a girl to trade her sexuality for survival, Margot is ruthlessly determined to shield Thandi from the same fate.

When plans for a new hotel threaten the destruction of their community, each woman – fighting to balance the burdens she shoulders with the freedom she craves – must confront long-hidden scars. From a much-heralded new writer, Here Comes the Sun offers a dramatic glimpse into a vibrant, passionate world most outsiders see simply as paradise.

‘Stuns at every turn... It's about women pushed to the edge, Jamaica in all its beauty and fury and more than anything else, a story that was just waiting to be told.’

– Marlon James, author of A Brief History of Seven Killings

‘Capturing the distinctive rhythms of Jamaican life, Here Comes the Sun sees a band of women battling for independence... As well as being a page-turner, the book left me with food for thought – there’s never been a more apt time to learn about women living realities so different from your own.’

‘Vividly captures the fraught dynamics of familial and romantic relationships.’

‘Here Comes the Sun was the first Jamaica-set book I read. As a Jamaican woman, that was really exciting. It follows three women: two sisters and their mum. The older sister is navigating sexuality and being a queer woman, the younger is battling identity, being a darker-skinned girl, bleaching. It’s really addictive.’

‘This buzzy novel dives under the shimmering surface of paradise to expose its dark secrets.’

‘An indelible portrait of a woman in motion. Nicole Dennis-Benn has created in Margot a fierce and fearless striver. A fantastic debut.’

‘Margot is one of the reasons to read this book. She is a startling, deeply memorable character. All of Ms. Dennis-Benn’s women are.’

‘Brave, clever and ambitious… Readers of this important debut will no doubt see Jamaica in a new and different light.’

‘I read it the way I read a thriller, holding my breath, waiting for the next new revelation. It’s Shakespearean-level drama and compulsively readable.’

‘Her prose is lyrical and vibrant, but Dennis-Benn has a deeper purpose, and she takes the reader on a trip that is impossible to forget.’

‘Here Comes the Sun sheds much-needed light on the island’s disenfranchised, particularly on the hardships suffered by its L.G.B.T. community. [An] important debut.’

‘Haunting and superbly crafted, this is a magical book from a writer of immense talent and intelligence.’

‘[A] striking portrayal of a vibrant community.’

‘Here Comes the Sun is a powerful reflection on femininity and sexuality in Jamaican culture […] Dennis-Benn's stunning, multi-layered novel explores the implications of race, reputation, class and money – and how they can push people to trade on today for the promise of a better tomorrow.’

‘Intense, unapologetic and remarkably powerful, Here Comes the Sun is a startling and melodic experience.’

‘A compelling exploration of exploitation, sacrifice, tourism, poverty and the drive for freedom, Here Comes the Sun will transport your mind – and heart – this summer.’

‘An essential read for anyone who has ever found themselves mulling over questions of the relationship between tourism and poverty.’

‘Dennis-Benn reveals a sure hand, creating a world she knows well, while offering intimate portraits of characters readers will care deeply about […] An impressive debut.’

‘This beautiful cover belies the darker story it holds. Debut novelist Dennis-Benn captures the beautiful Jamaican setting in a novel of sacrifice and forbidden love that offers commentary on race, class, gender and sexuality without distracting from a gripping plot, eloquent and moving writing, and vivid characters.’

‘A superbly realized tale of gender, class, race and sexuality in Jamaica. Nicole Dennis-Benn is a powerful and brave new voice in American literature.’

‘Nicole Dennis-Benn has delivered a really special read with this one.’

‘Here Comes the Sun arrives in the season of the beach read, but with eloquent prose and unsentimental clarity, Dennis-Benn offers an excellent reason to look beyond the surface beauty of paradise. This novel is as bracing as a cold shower on a hot day, a reminder that sometimes we need to see things as they are, not as we wish they would be.’

‘There is a richness to the way the [Nicole Dennis-Benn] writes about Jamaican culture and identity, along with the New World colonialism that has cropped up along the nation's shores […] This book treads into brave territory. The struggle is not a beautiful one. But it is deeply powerful.’

‘Nicole Dennis-Benn’s scorching debut is both desperately sad and impossible to forget.’

‘With Here Comes the Sun, Dennis-Benn announces her literary presence with a novel that conjures something transcendent from the darker corners of human nature.’

‘A talent to watch.’

‘In saturated paragraphs and rich patois, Here Comes The Sun lays out the stark realities of an island whose entire economy relies on natural beauty, cheap labor, and limited resources – and explores what it means to live in a place where, as one character says, ‘nobody love a black girl. Not even herself.’

‘[A] dazzling and gutting novel.’

‘Here Comes the Sun is a vivid and intimate portrayal of lives woven together by adversity.’

‘Here Comes the Sun is every bit as dazzling as its title suggests. Nicole Dennis-Benn draws us so deeply into the fates of her unforgettable characters that we can’t help but dream, suffer, celebrate, and grieve alongside them. Each page of this terrific debut vibrates with power, heart, and unflinching honesty – I couldn’t put it down, yet didn’t want it to end.’

– Mia Alvar, author of In The Country

‘Here Comes the Sun is a moving portrait of a Jamaican family and community wrestling with the great questions in life – how to live and love freely in a world filled with obstacles to both. Nicole Dennis-Benn's exploration of Caribbean women's desires for themselves and each other, is an important contribution to our literature.’

– Naomi Jackson, author of The Star Side of Bird Hill

‘In Here Comes the Sun, Nicole Dennis-Benn boldly takes on the emotional and psychosocial effects of colorism and classism, among other topics. Here is a story of love and betrayal within the parameters of friendships and families in one Jamaican community. Dennis-Benn has written a book that is full of culture and crackling with life.’

– Chinelo Okparanta, author of Under the Udala Trees

‘Remember this title: It'll likely be the buzzword in all upcoming literary awards competitions.’