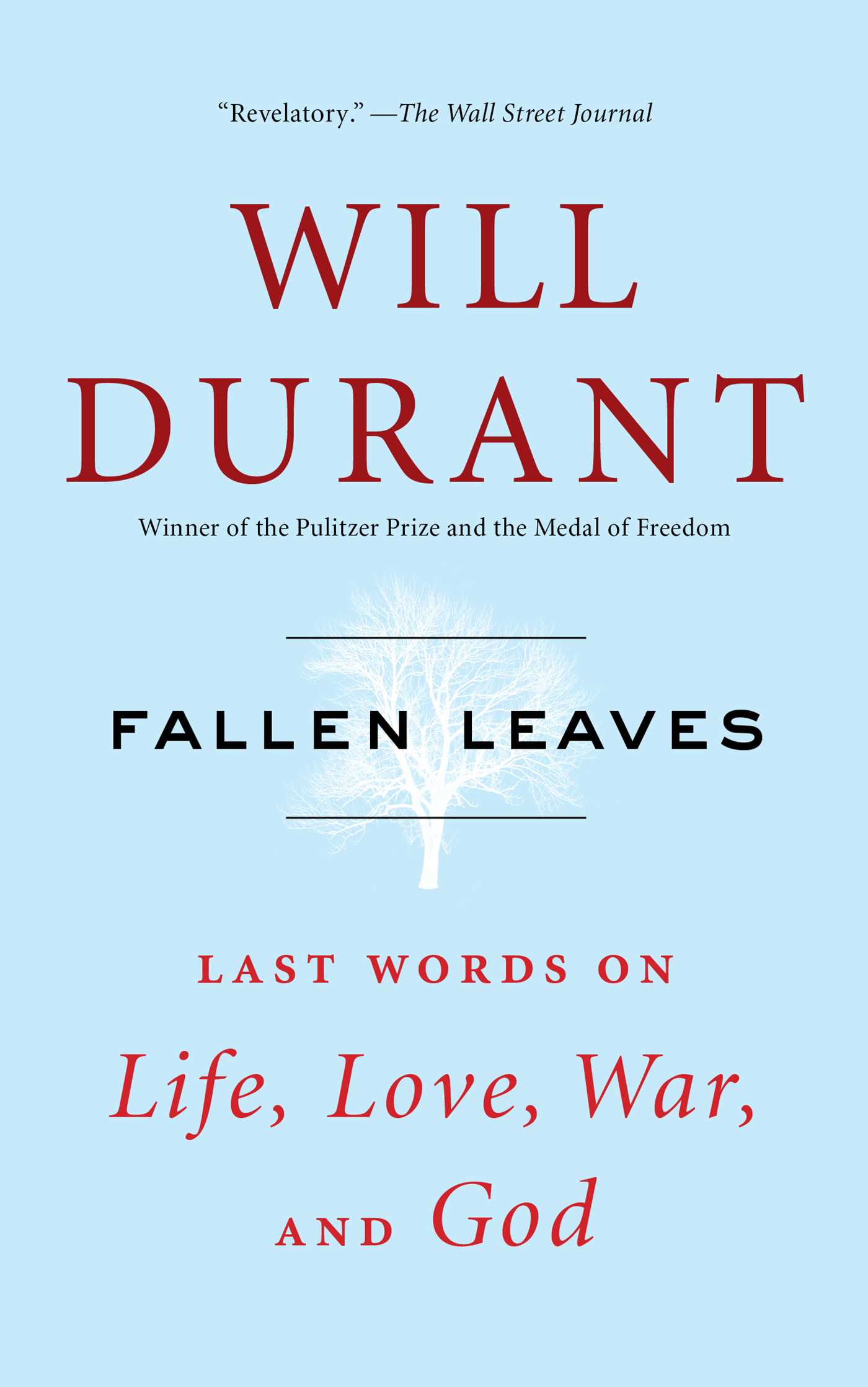 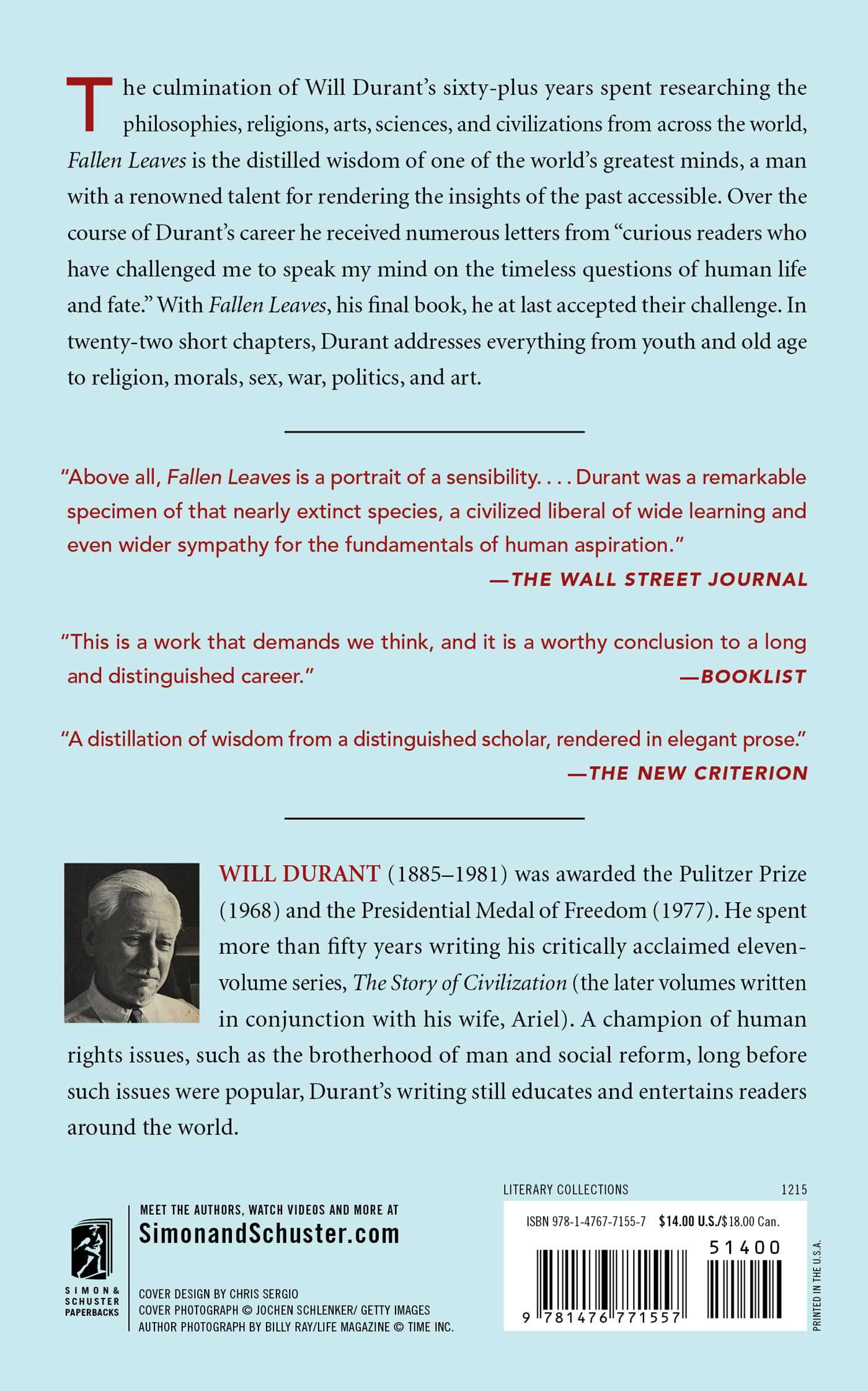 Praised as a “revelatory” book by The Wall Street Journal, this is the last and most personal work of Pulitzer Prize–winning author and historian Will Durant, discovered thirty-two years after his death.

The culmination of Will Durant’s sixty-plus years spent researching the philosophies, religions, arts, sciences, and civilizations from across the world, Fallen Leaves is the distilled wisdom of one of the world’s greatest minds, a man with a renowned talent for rendering the insights of the past accessible. Over the course of Durant’s career he received numerous letters from “curious readers who have challenged me to speak my mind on the timeless questions of human life and fate.” With Fallen Leaves, his final book, he at last accepted their challenge.

In twenty-two short chapters, Durant addresses everything from youth and old age to religion, morals, sex, war, politics, and art. Fallen Leaves is “a thought-provoking array of opinions” (Publishers Weekly), offering elegant prose, deep insights, and Durant’s revealing conclusions about the perennial problems and greatest joys we face as a species. In Durant’s singular voice, here is a message of insight for everyone who has ever sought meaning in life or the counsel of a learned friend while navigating life’s journey.

OUR LIFE BEGINS
A group of little children with their ways and chatter flow in,

Like welcome rippling water o’er my heated nerves and flesh.

—WALT WHITMAN, “AFTER THE ARGUMENT”

We like children first of all because they are ours; prolongations of our luscious and unprecedented selves. However, we also like them because they are what we would but cannot be—coordinated animals, whose simplicity and unity of action are spontaneous, whereas in the philosopher they come only after struggle and suppression. We like them because of what in us is called selfishness—the naturalness and undisguised directness of their instincts. We like their unhypocritical candor; they do not smile to us when they long for our annihilation. Kinder und Narren sprechen die Wahrheit—“Children and fools speak the truth”; and somehow they find happiness in their sincerity.

See him, the newborn, dirty but marvelous, ridiculous in actuality, infinite in possibility, capable of that ultimate miracle—growth. Can you conceive it—that this queer bundle of sound and pain will come to know love, anxiety, prayer, suffering, creation, metaphysics, death? He cries; he has been so long asleep in the quiet warm womb of his mother; now suddenly he is compelled to breathe, and it hurts; compelled to see light, and it pierces him; compelled to hear noise, and it terrifies him. Cold strikes his skin, and he seems to be all pain. But it is not so; nature protects him against this initial onslaught of the world by dressing him in a general insensitivity. He sees the light only dimly; he hears the sounds as muffled and afar. For the most part he sleeps. His mother calls him a “little monkey,” and she is right; until he walks he will be like an ape, and even less of a biped, the womb-life having given his funny little legs the incalculable flexibility of a frog’s. Not till he talks will he leave the ape behind, and begin to climb precariously to the stature of a human being.

Watch him, and see how, bit by bit, he learns the nature of things by random movements of exploration. The world is a puzzle to him; and these haphazard responses of grasping, biting, and throwing are the pseudopodia, which he puts out to a perilous experience. Curiosity consumes and develops him; he would touch and taste everything from his rattle to the moon. For the rest he learns by imitation, though his parents think he learns by sermons. They teach him gentleness, and beat him; they teach him mildness of speech, and shout at him; they teach him a Stoic apathy to finance, and quarrel before him about the division of their income; they teach him honesty, and answer his most profound questions with lies. Our children bring us up by showing us, through imitation, what we really are.

The child might be the beginning and the end of philosophy. In its insistent curiosity and growth lies the secret of all metaphysics; looking upon it in its cradle, or as it creeps across the floor, we see life not as an abstraction, but as a flowing reality that breaks through all our mechanical categories, all our physical formulas. Here in this expansive urgency, this patient effort and construction, this resolute rise from hands to feet, from helplessness to power, from infancy to maturity, from wonder to wisdom—here is the “Unknowable” of Spencer, the Noumenon of Kant, the Ens Realissimum of the Scholastics, the “Prime Mover” of Aristotle, the To ontos on, or “That Which Really Is,” of Plato; here we are nearer to the basis of things than in the length and breadth and thickness and weight and solidity of matter, or in the cogs and pulleys and wheels and levers of a machine. Life is that which is discontent, which struggles and seeks, which suffers and creates. No mechanistic or materialistic philosophy can do it justice, or understand the silent growth and majesty of a tree, or compass the longing and laughter of children.

Childhood may be defined as the age of play; therefore some children are never young, and some adults are never old. 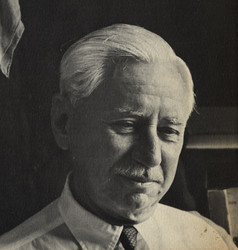 Will Durant (1885–1981) was awarded the Pulitzer Prize (1968) and the Presidential Medal of Freedom (1977). He spent more than fifty years writing his critically acclaimed eleven-volume series, The Story of Civilization (the later volumes written in conjunction with his wife, Ariel). A champion of human rights issues, such as the brotherhood of man and social reform, long before such issues were popular, Durant’s writing still educates and entertains readers around the world.

"Fallen Leaves is in some ways a slight book. But it is also a revelatory one. Most of Durant's work is about the thoughts and actions of others. Fallen Leaves is very much about the thoughts of Will durant concerning—well, almost everything. You'll find short essays on childhood, old age, death, war, politics, capitalisn, art, sex, God and morality. ... Above all, Fallen Leaves is a portrait of a sensibility. ... Durant was a remarkable specimen of that nearly extinct species, a civilized liberal of wide learning and even wider sympathy for the fundamentals of human aspiration."

"Short but persuasive commentaries on a diversity of topics from a respected scholar of humanity."

"Some passages, such as his observations on youth and middle age, are personal and specific, while others, such as his ruminations on the existence of God, border on philosophy. . . . [And others] still carry a beneficial sting, such as his thoughts on war and nationalism and his plea for racial harmony (Durant’s civil rights advocacy dated back to 1914). . . . a thought-provoking array of opinions."

“Some of his musings are provocative, even outrageous…this is a work that demands we think, and it is a worthy conclusion to a long and distinguished career.”

"The book serves as a distillation of wisdom from a distinguished scholar, rendered in elegant prose."

More books from this author: Will Durant