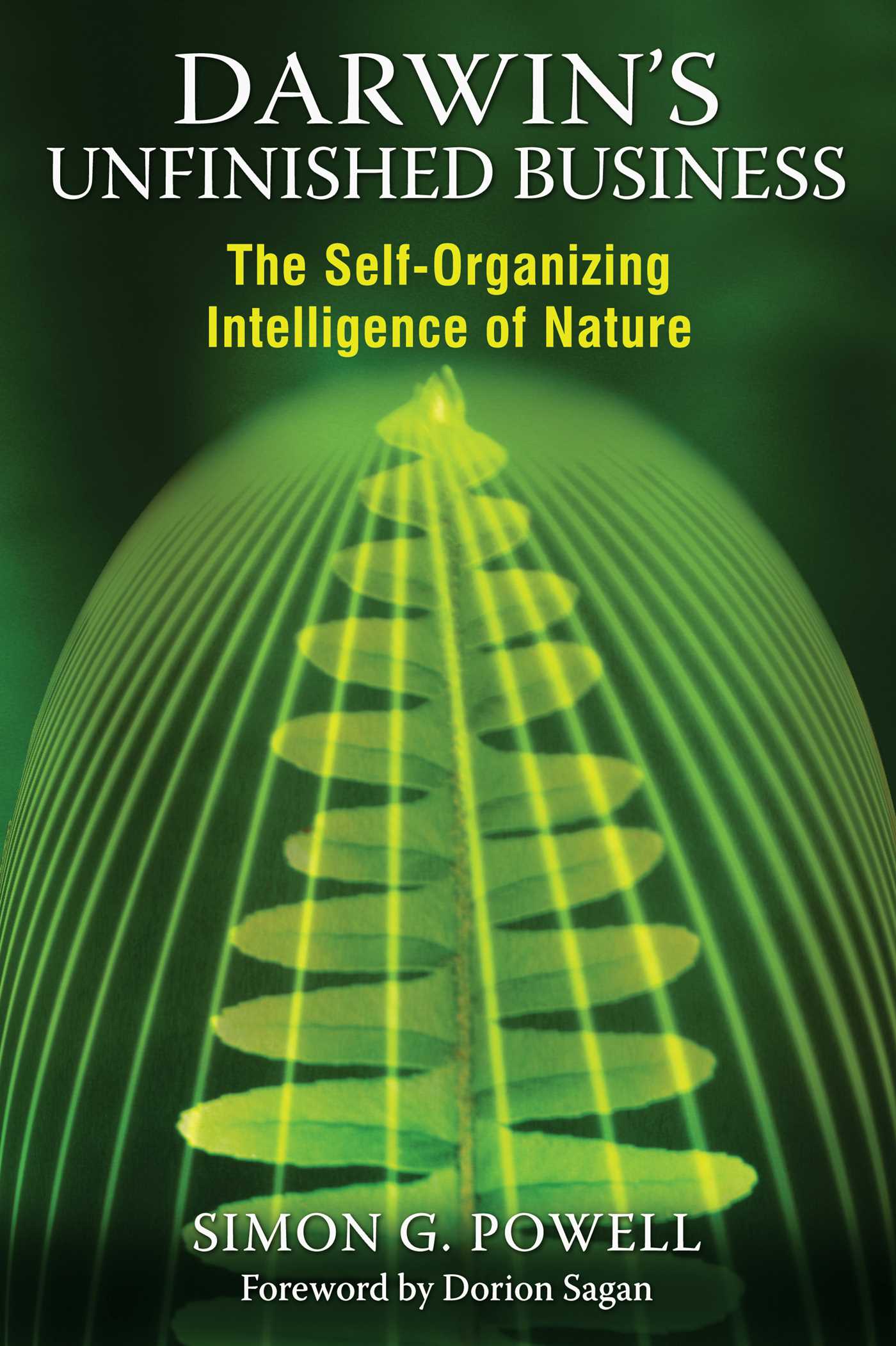 The Self-Organizing Intelligence of Nature

• Explains why context is more important than mutation in evolutionary innovation

• Shows how, by recognizing Nature’s innovative and creative powers, we can overcome our social and environmental challenges with a new green science of evolution

Darwin’s theory of evolution is undoubtedly one of the most important scientific ideas of the modern age, explaining the existence of both life and consciousness without recourse to divine intervention. Yet how do we interpret evolution? How do we evaluate the ability of Nature to engineer something as exquisite as the genetic code or the human brain? Could it be that evolution is an intelligent process? Is Nature smart? According to most scientists, the answer is no. While humanity may be intelligent and purposeful, the natural processes that crafted us are deemed to be devoid of such attributes.

In a radical move away from orthodoxy, Simon G. Powell extends Darwin’s vision by showing that evolution is not just about the survival of the fittest but rather the survival of clever and sensible behavior. Revealing the importance of the context in which things evolve, he explores the intelligent learning process behind natural selection. Rich with examples of the incredibly complex plants, animals, insects, and marine life designed by Nature--from the carnivorous Venus flytrap and the fungus-farming leafcutter ant to the symbiotic microbes found inside the common cow--he shows Nature as a whole to be a system of self-organizing intelligence in which life and consciousness were always destined to emerge. Examining the origins of life and the failure of artificial intelligence to compete with natural intelligence, he explains how our scientifically narrow-minded views on intelligence are now acting as a barrier to our own evolution. As Darwin’s unfinished business comes to light and Nature’s intelligence is embraced, we learn that Nature’s agenda is not simply the replication of genetic matter but of expanding consciousness. By working with Nature’s creative and innovative powers instead of against them, we can address today’s social and environmental challenges with a new green science of evolution.

It is time to look even more closely and critically at the orthodox evolutionary paradigm we are attempting to overwrite. To recapitulate, it is not that this paradigm is wrong, only that it is not right enough. It is not the whole truth. It is not the whole story. Obsessed with details like individual genes, it fails to capture the exuberant panache, confluential orchestration, and sheer organismic acumen of life, serving instead to reduce organisms and the sophisticated feats of biological engineering that they embody to merely this or merely that genetic mechanism. This is reductionism gone awry, the zealous urge to reduce autopoietic artistry into bits and pieces seemingly explicable in their own terms without reference to any bigger context. While we would never dream of reducing an acclaimed painting or a musical symphony in the same reductionistic way, Nature’s tree of life is treated differently.

The creed of merelyism tells us a lot about human psychology. It is clear that the majority of scientists and philosophers like to consider themselves and other humans as the sole possessors of “high” intelligence whereas the process, which built them (i.e., evolution, or Nature), is considered pointless and mindless. Therefore, any paradigm that bolsters this kind of merelyistic egoism is destined for a warm reception. The more that the complexity of life is reduced, the more smugly confident some may feel about themselves. The more we can remove signs of intelligence operating within the evolving tree of life, the more unique and esteemed human intelligence becomes. Merelyism attracts research grants and academic acclaim. Unfortunately the same cannot be said for alternative and more holistic approaches to understanding life. As we shall see in this chapter, a more holistic approach means an approach in which context (i.e., the sensible environment and the sensible laws of Nature operating therein) is the key factor with which to understand both the origin and subsequent direction of evolution.

In order to allow the new paradigm of natural intelligence to acquire momentum, let us begin by taking a basic example of a living organism and see how the old paradigm is applied so as to explain that organism’s existence. According to the thought experiment of the last chapter, we have already established that organisms represent significantly arranged systems/patterns of atoms, molecules, and cells. Now we need to see in even more detail how merelyism explains such evolutionary feats of organic organization. As alluded, genes are the key focus. A tiger will serve as our study example. Consider one in your mind’s eye.

Now, any sane, sober, and right-minded person gazing upon a tiger will doubtless be impressed by the apparent design, for a tiger is an exceptionally beautiful creature capable of running, hunting, calculating, digesting food, excreting waste and toxins, breathing, maintaining its internal temperature, healing itself, cleaning itself, reproducing, and so on. Flaunting beautiful autopoiesis, a tiger has what it takes to survive. Well, apart from the relentless threat of man, that is. Notwithstanding the threat of our species, tigers are patently highly efficient living organisms.

As we have ascertained, organisms like tigers are constructed from trillions of cells; skin cells, liver cells, brain cells, muscle cells, and so forth. These cells are themselves made up of trillions of molecules, and those molecules further made from atoms. A tiger is thus a singularly significant arrangement of physical material, untold trillions of basic parts orchestrated into a seamless and enduring pattern able to stave off entropy. In short, a tiger has striking natural design written in it and all over it. No wonder, then, that people in the past were tempted to see organisms as the work of a divine hand. But we live in more educated times. From our vantage point atop centuries of science, we are able to build upon Darwin’s revolutionary insights and see that multicellular organisms like tigers are not wrought ex nihilo by the hand of God almighty but are the manifest result of evolution through natural selection (i.e., the hand of “almighty” Nature). We have at least to buy into this idea before proceeding with our analysis.

Biological science tells us that the physical form of a tiger and its behavioral repertoire (its phenotype) are determined by its genes, those long sequences of DNA residing in each of its cells. We won’t take issue with this either. All the evidence points to the fact that DNA is a digital code (quaternary and not binary like computer code) bearing instructions on how to link amino acids so as to make proteins, which make cells, tissues, and organs. Genes, being discrete segments of DNA, which get replicated during reproduction, are thus sets of instructions for eliciting biological autopoiesis--they code for the components that, when organized, elicit the sort of nifty biological processes previously considered. In the tiger there may be gene complexes that control musculature or the immune system or fur coloration and so on.

The plethora of genes that exist within the tiger gene pool are precisely those genes that work, which confer upon tigers morphological and behavioral characteristics that serve to enhance the reproductive success of tigers. Genes for building strong leg muscles will obviously be passed on to future generations, because tigers with strong leg muscles will be able to run faster and thus hunt better. More food equals better fitness equals better reproductive viability. A gene, which made a tiger lopsided or extremely timid in the presence of herbivores, would not survive long, because such genes would obviously be selected against. So it is that the hand of Nature continually selects among various genes. Those genes bearing instructions, which aid the gene’s own success in replication, are favored by Nature, whereas less survival-favoring genes are selected against. Indeed, one can reason in this way about natural selection without actually having seen a tiger.

Simon G. Powell is a writer, musician, and filmmaker. He is the author of The Psilocybin Solution and the director/presenter of the film documentary Metanoia: A New Vision of Nature. He lives in London.

“Simon G. Powell forcefully but gently demonstrates that intelligence (modes of being that acquire information, learn, and meaningfully respond to larger contexts) is intrinsic to our natural world. People who deny the intelligence of the living (microbes, plants, other animals) are abysmally, indeed dangerously, ignorant. They literally ignore our ultimate, planetwide sources of joy, air, water, food, and energy. Read this informative, science-packed, yet accessible book and enjoy its wisdom.”

– Lynn Margulis, author of Symbiotic Planet, member of National Academy of Sciences, and professor at

“By working with nature’s creative and innovative powers instead of against them, we can address today’s social and environmental challenges with a new green science of evolution.”

“So why is this book important? Because in this age of ecological crisis, we need to understand how nature works...By understanding the system of natural intelligence accessibly laid out by Simon Powell, we can better understand how to work with nature and address current and future environmental challenges head on. A fascinating and profound read that will change the way you look at the world around you.”

– Graham Hancock, author of Fingerprints of the Gods and Supernatural

“A treasure trove of interesting material.”

– Edward Goldsmith, eco-author and founder of The Ecologist

The Self-Organizing Intelligence of Nature