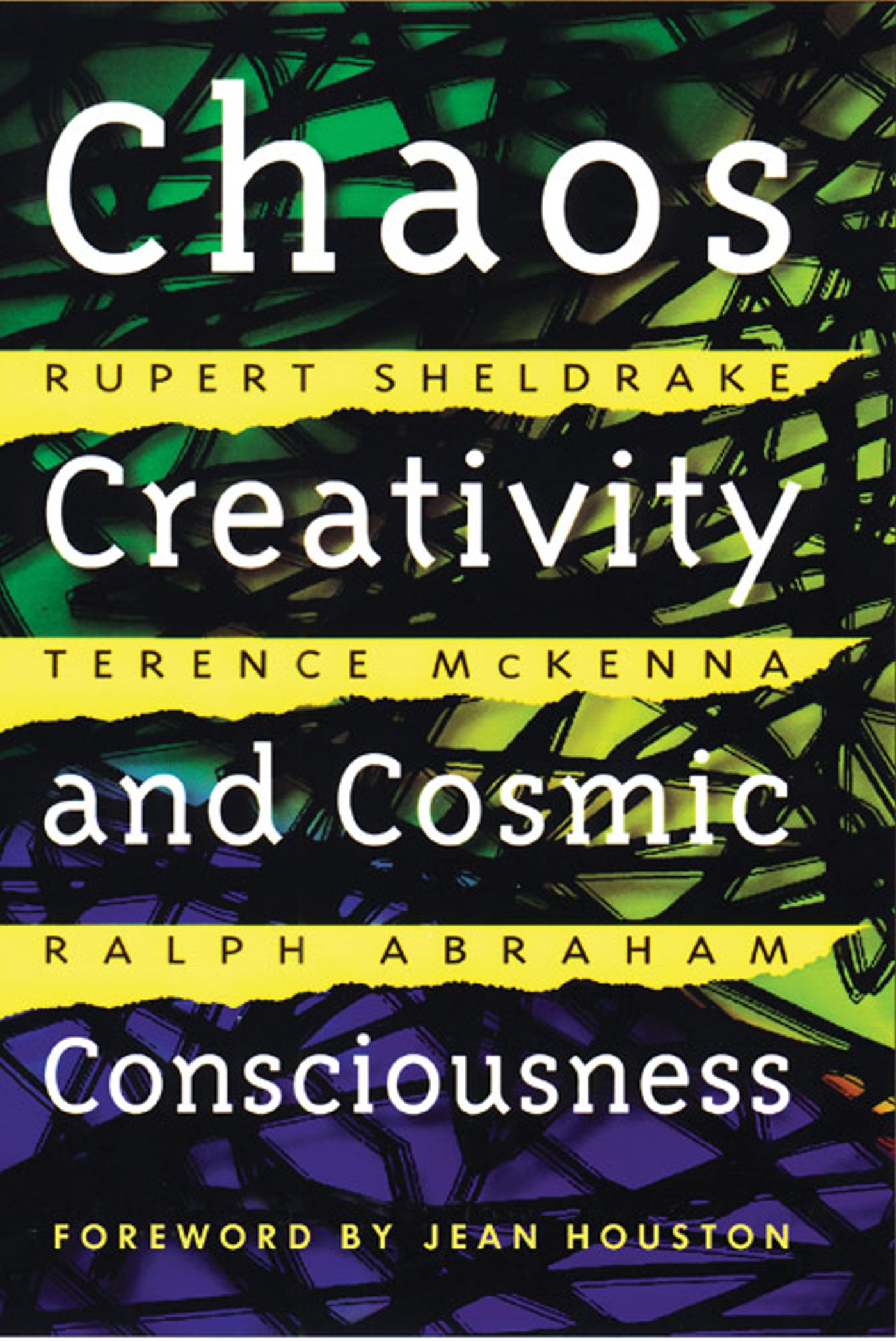 Three of the most original thinkers of our time explore issues that call into question our current views of reality, morality, and the nature of life.

• A wide-ranging investigation of the ecology of inner and outer space, the role of chaos theory in the dynamics of human creation, and the rediscovery of traditional wisdom.

In this book of "trialogues," the late psychedelic visionary and shamanologist Terence McKenna, acclaimed biologist and originator of the morphogenetic fields theory Rupert Sheldrake, and mathematician and chaos theory scientist Ralph Abraham explore the relationships between chaos and creativity and their connection to cosmic consciousness. Their observations call into question our current views of reality, morality, and the nature of life in the universe. The authors challenge the reader to the deepest levels of thought with wide-ranging investigations of the ecology of inner and outer space, the role of chaos in the dynamics of human creation, and the resacralization of the world. Among the provocative questions the authors raise are: Is Armageddon a self-fulfilling prophecy? Are we humans the imaginers or the imagined? Are the eternal laws of nature still evolving? What is the connection between physical light and the light of consciousness?

Part ceremony, part old-fashioned intellectual discussion, these trialogues are an invitation to a new understanding of what Jean Houston calls "the dreamscapes of our everyday waking life."

From Chapter 3 "Chaos and the Imagination"
TERENCE: The psychedelic revival is an effort to find our way back to something like the [Eleusiniam] mysteries. We are not the first nor the most eminent to suggest this kind of reengineering of the human animal.. I call attention to the words of Arthur Koestler, the great anticommunist freedom fighter and scientific intellectual. In a book called The Ghost in the Machine, he concluded that there has to be mass pharmacological intervention to change human behavior. He envisioned a drug that inhibits territoriality. Our reflexes and our mental set are highly and well adapted to the stoning to death of woolly mastodons, but, since we so rarely do that, we need to retool for living in peace while managing limited resources. The dissolving of boundaries by psychedelics certainly makes them candidates for antiterritoriality drugs.
RALPH: Do you think that some of our existing national holidays could be changed, or that a mythological mutation could be introduced that would go in this direction? For example, in Switzerland, they recently invented Fastnacht. They previously had no rituals at all, barely Christmas, and there was a suffering of enormous boredom among people there. It was said that there was no known way to make a new friend in Switzerland. So, just a few years ago, they instituted Fastnacht, in February. It is three days and nights of alcoholic revelry around the fantastic reenactment of a medieval drama. It involves people marching in the streets in parades led by musicians who have practiced a medieval song on medieval instruments all year long just for this three-day ceremony. Now it is said that, during Fastnacht, you can make a new friend.
TERENCE: Something along that line that I've advocated-sometimes facetiously, sometimes seriously-is calendrical reform, and I have just the calendar all worked out. I won't lay it all out here, but the basic notion is that it's a lunar calendar of thirteen lunar cycles. It has three hundred and eighty-four days, and consequently it precesses nineteen days against the solar year. This would have the effect of taking the great yearly events of the calendar and slowly moving them through the seasons. For instance, if we kept Christmas on December 25, and you as child celebrated Christmas in winter, then as a teenager you would celebrate it in spring, and as a young adult you would celebrate it in high summer. As an older person, it would occur in autumn, and then, when you were truly old, Christmas would return again to the winter.
The notion is to overcome the really bad dominator idea that the calendar should be anchored rigidly at the equinoctial and solstitial points so that the heliacal rising of the equinoctial sun is always in the same place. Our current calendar sends the message that there is stability. The calendar is the largest framework there is; in it, all other contexts are somehow subsets. The solar calendar is an effort to deny humanity's mortality by reinforcing a false notion of permanence. What we actually want is a calendar that says to us, "All is flow; all is flux; all relationships are in motion to everything else." This is a truer picture of the world. This may seem trivial, and exemplary of why we eggheads are harmless. But, think about it.
If we yield the structure of the calendar to the dominator culture, letting it tell us what kind of calendar we shall have, then we shall all live within the context of the dominator framework. Changing the calendar would have tremendous consequences, and it would not be opposed by the dominant culture until it was too late. It would be regarded as some kind of a crank thing, because it wouldn't be realized that we were twiddling with the dials of our whole civilization's image of time and change.
The year 2000 provides a built-in opportunity to switch the train to a new track because at these millennial moments there's a certain uncertainty in the mass mind about how to proceed. If you just jump up onto the stage and say, "This is it, folks!" you might be able to pull it off.
RUPERT: The first thing that occurs to me is that your idea of a lunar calendar in which the months and festivals move around the year is already in place. It's the calendar of the Islamic world. For example, Ramadan, the fasting month, retrogresses around the year., so people experience it both in winter and in summer in the course of their lives. This is not exactly a confirmation of your theory about such a calendar breaking the dominator mode.
TERENCE: Your point is certainly, um . . . unwelcome.
Rupert Sheldrake

Rupert Sheldrake is a biologist, a former research fellow of the Royal Society at Cambridge, a current fellow of the Institute of Noetic Sciences near San Francisco, and an academic director and visiting professor at the Graduate Institute in Connecticut. He received his Ph.D. in biochemistry from Cambridge University and was a fellow of Clare College, Cambridge University, where he carried out research on the development of plants and the ageing of cells. He is the author of more than eighty scientific papers and ten books, including Dogs That Know When Their Owners Are Coming Home; Morphic Resonance; The Presence of the Past; Chaos, Creativity, and Cosmic Consciousness; The Rebirth of Nature; and Seven Experiences That Could Change the World. In 2019, Rupert Sheldrake was cited as one of the "100 Most Spiritually Influential Living People in the World" according to Watkins Mind Body Spirit magazine.

McKenna was a scholar of shamanism, ethno-botanist, psychedelic researcher and author of many books.

Ralph Abraham is the author of Dynamics: The Geometry of Behavior. He lives in California.

"A book for all those who seek to quest beyond the limits of the ordinary. Three fine thinkers take us plunging into the universe of chaos, mind, and spirit. Instead of leaving us lost, they bring us back with startling insights and more wonder than we knew we had."

" Records the exciting intellectual friendship of three amazing minds pushing to the edge of history in search of a new consciousness blending scientific observation, mythical imagination, and visionary speculation."

– Riane Eisler, author of The Chalice and the Blade

"Should be required reading for anyone who believes that science and spirituality cannot and should not interact."

"One finishes Chaos, Creativity, and Cosmic Consciousness with a sense of heightened awareness and wonder."

" . . . represent[s] a very innovative and exciting new way of understanding life as we know it."