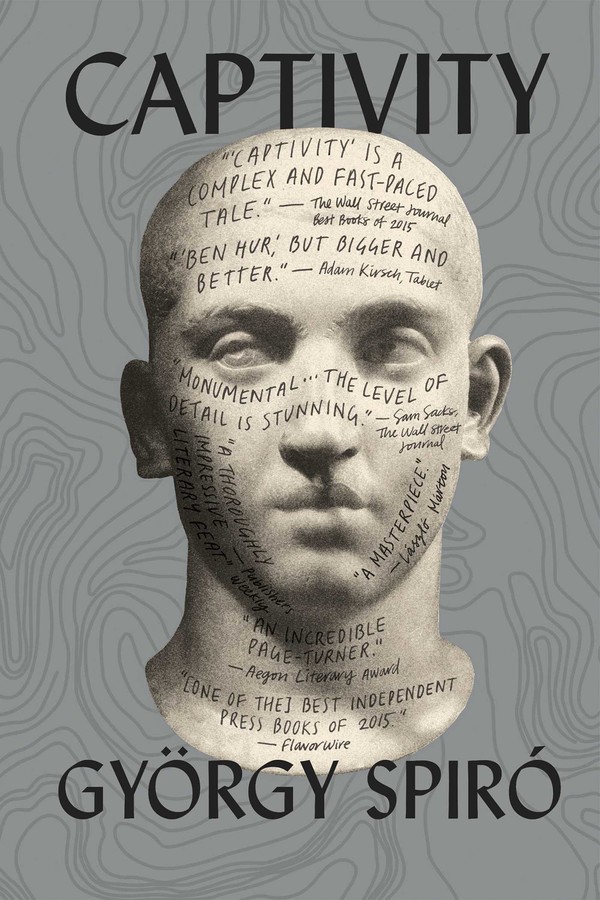 The epic bestseller and winner of the prestigious Aegon Literary Award in Hungary, Captivity is an enthralling and illuminating historical saga set in the time of Jesus about a Roman Jew on a quest to the Holy Land.

A literary sensation in Hungary, György Spiró’s Captivity is both a highly sophisticated historical novel and a gripping page-turner. Set in the tumultuous first century A.D., between the year of Christ’s death and the outbreak of the Jewish War, Captivity recounts the adventures of the feeble-bodied, bookish Uri, a young Roman Jew.

Frustrated with his hapless son, Uri’s father sends the young man to the Holy Land to regain the family’s prestige. In Jerusalem, Uri is imprisoned by Herod and meets two thieves and (perhaps) Jesus before their crucifixion. Later, in cosmopolitan Alexandria, he undergoes a scholarly and sexual awakening—but must also escape a pogrom. Returning to Rome at last, he finds an entirely unexpected inheritance.

Equal parts Homeric epic, brilliantly researched Jewish history, and picaresque adventure, Captivity is a dramatic tale of family, fate, and fortitude. In its weak-yet-valiant hero, fans will be reminded of Robert Graves’ classics of Ancient Rome, I, Claudius and Claudius the God.

“Captivity is a complex and fast-paced tale of Jewish life in the early first century, a sort of sword-and-sandals saga as reimagined by Henry Roth. The narrative follows Uri from Rome to Jerusalem and back, from prospectless dreamer to political operative to pogrom survivor—who along the way also happens to dine with Herod Antipas and Pontius Pilate and get thrown into a cell with a certain Galilean rabble-rouser. Hungarian György Spiró’s deft combination of philosophical inquiry and page-turning brio should overcome that oft-mentioned American timidity toward books in translation.”

“‘BEN HUR,’ BUT BIGGER AND BETTER. Hungarian writer György Spiró’s newly translated novel Captivity powerfully sets the perils of modern Jewry in Early Christian Rome . . . Captivity [is] a sprawling (more than 800 pages), picturesque, old-fashioned historical novel about the Roman Empire, in the showy tradition of Ben Hur and I, Claudius. In fact, both Jesus and Claudius, the main characters of those books, make cameo appearances in Captivity, as do other boldface names of the 1st century CE, including Caligula, Pontius Pilate, and Philo of Alexandria. What sets Captivity apart is that it makes the rare attempt to view all these historical phenomena—from the rise of Christianity to the flamboyant vices of the emperors—through a distinctively Jewish lens . . . Where Spiró excels is dramatizing the world through which Uri moves—its political institutions and social arrangements, its sights and smells . . . a complex and thoughtful portrait of what Judaism meant in ancient Rome . . . Captivity draws you in with its pageant of the classical world, but by the end it also turns out to be a profound meditation on what Judaism meant, and means.”

“With the novel Captivity, Spiró proves that he is well-versed in both historical and human knowledge. It appears that in our times, it is playfulness that is expected of literary works, rather than the portrayal of realistic questions and conflicts. As if the two, playfulness and seriousness were inconsistent with each other! On the contrary (at least for me) playfulness begins with seriousness. Literature is a serious game. So is Spiró’s novel."

“This remarkable novel, recently translated from the Hungarian, is as close as we are likely to get to a real feel for how it was to live in the first century CE . . . Spiró’s artistic agility shines in his recreation of the world through which Uri moves . . . Spiró has absorbed an awesome amount of information to create his ancient tableaux. He demonstrates a mastery of everything from the silk trade to the workings of ancient economies . . . The strength of the book is in its unheroic, unillusioned depiction of ancient life . . . if you are curious about the ancient world, if you wish to get a “finger-feel” for what it was like to live there, and to think about the forces that shaped the rise of Christianity, Captivity is well worth your time. Here is a faithful, fantastically informed, and extravagantly detailed picture of one of the most turbulent and consequential moments in human history.”

“Uri, the hero of Spiró's enormous novel, is a Jewish Candide, although the scope of his exploits suggests more of a naive Don Quixote type.… Deliberate, evocative and richly detailed. Spiró's elaborate style reflects Uri's acute observation, with the hint of a wink at the reader.… Spiró, a Hungarian man of letters, juxtaposes the prosaic and the significant with aplomb and offers a cheeky, unique view of history through the eyes of his modest everyman. A thoroughly impressive literary feat.”

“A visceral new form of epic history. Here mountains of trivia form vivid landscapes and academic minutiae open windows into the soul of a forgotten age. It is a work of fiction, though, and it is hilarious . . . Spiró’s serious accomplishment is to challenge the chilling observation, popularly attributed to Stalin, that 'one death is a tragedy and one million deaths a statistic' by breathing life into the neglected statistics of a magnificent—and terrifying, brutal—age . . . An intently philosophical book . . . Captivity expresses historical ideas authentically . . . the real power of Captivity is the ability the extensive historical detail lends the reader to inhabit and empathize with ancient life. It is difficult to imagine a more entertaining way to realize so much data, and it is wonderful that Spiró has managed such an accomplishment. His technique is a welcome innovation for historical fiction in general, and perhaps the drollest scholarly introduction to the first century yet.”

“Brilliant, picaresque novel of Jewish life in the first century, a bestseller and prizewinner in Spiró’s native Hungary . . . There are two great impulses at work in Spiró’s yarn, the first being a comprehensive sociology of Roman Jewry, the second a grand, seriocomic novel of ideas. Uri, overcoming obstacles and a flaw of birth, makes for a Joseph Campbell–worthy epic hero . . . there’s a lot packed into these pages, including an engagingly complicated portrait of Roman-Jewish relations in the early empire ('We loathe, absolutely loathe your kind, but not to the extent that we too will perish'), a rambunctious tour of ancient philosophies (including a hilarious semi-Mishnaic defense of prostitution), and no end of plain, good shaggy dog humor. A winning and thoughtful entertainment, somewhere between Lives of the Caesars and The Tin Drum.”
—Kirkus Reviews

“[One of] the fifty best independent press books of 2015 . . . There is no shortage of Hungarian masters writing enormous novels—Krasznahorkai and Nádas immediately come to mind—but Spiró’s epic road novel stands on its own. A picaresque that doubles as a kind of Jewish history, it’s remarkably still a page-turner.”