Echoes of War: a letter from Tania Blanchard

My love of family stories is nothing new. I’ve been fascinated by them since I was a child. This time, the inspiration for Echoes of War comes from my father’s side of the family, who hails from Calabria in Southern Italy. A few years ago, I learnt that my grandfather fought in the war with Ethiopia, then called Abyssinia in 1935 and also fought in Albania before World War Two. It sparked my imagination and I wanted to learn more about a little known part of the world and how the people of southern Italy might have experienced the tumultuous times of Mussolini’s fascist Italy and World War Two.

I’m glad I decided to follow my father’s heritage. I’ve learnt so much researching this fascinating period of Italian history and I had no idea how many wars Italy had been involved in and the upheaval that resulted, in such a short period of time. My story begins with the war with Abyssinia in 1936, as Mussolini drives forward with his dream of colonial expansion and the creation of a second Roman Empire. It touches on the Spanish Civil War, the invasion of Albania and explores World War Two, particularly when it hits Italian shores. Delving into the Italian experience and perspective of war was what I was most intrigued by, especially of southern Italians in remote villages who were far from the fighting of the war, just like my grandparents and their families.

I’ve loved researching and exploring the connection between family, religion, medicine/healing and the ancient Greek and Byzantine roots of Calabria that have been preserved for centuries. This land was once called Magna Graecia and settled in the 8th Century BC. I have the strong and feisty Giulia, spending time at an ancient Byzantine monastery in the rugged mountains of Calabria, learning herbal medicine and taking part in the annual festival dedicated to the Madonna.

It’s been fascinating to explore the rich and ancient cultural influences of the region. But the most wonderful part has been reconnecting with family and friends, hearing their stories about Calabria, sampling gorgeous Italian cooking and food and even getting my hands dirty and learning how to make Italian salami!

In the process of revisiting this part of my heritage, I’ve been reminded how my love of family and family stories have come from my own background. I can’t wait to share this story of family, war and the intriguing and passionate people of Calabria when Echoes of War hits the shelves on October 6 this year. 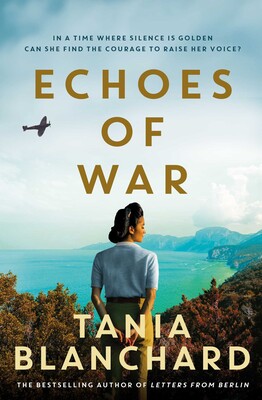 Echoes of War
By Tania Blanchard

Set in Mussolini’s Italy amid great upheaval, this is the story of one woman’s determination to find her place in a world that men are threatening to tear apart. Another heart-rending novel inspired by a true story from Australia's bestselling author of The Girl from Munich.

In a remote farming village nestled in the mountains that descend into the sparkling Ionian Sea, young and spirited Giulia Tallariti longs for something more. While she loves her home and her lively family, she would much rather follow in her nonna’s footsteps and pursue her dream of becoming a healer.

But as Mussolini’s focus shifts to the war in Europe, civil unrest looms. Whispers of war are at every corner and her beloved village, once safe from the fascist agenda of the North, is now in very real danger.

Caught between her desire to forge her own path and her duty to her family, Giulia must draw on the passion in her heart and the strength of her conviction.

Can she find a way to fulfill her dreams or will the echoes of war drown out her voice?

PRAISE FOR TANIA BLANCHARD
‘Captures the intensity of a brutal and unforgiving war, successfully weaving love, loss, desperation and, finally, hope into a gripping journey of self-discovery.’ Courier Mail

‘An epic tale, grand in scope … Packs an emotional punch that will reverberate far and wide.’ Weekly Times

‘A tumultuous journey from order to bedlam, and from naive acceptance of the status quo to the gradual getting of political wisdom.’ Sunday Age

‘An original and innovative take on the World War II genre that captures the hauntingly desperate essence of the war. Tania Blanchard has written yet another spectacular novel. Don’t miss this.’ Better Reading

‘This is emotional reading for anyone born of immigrant stock as it explores the pain of leaving your homeland and your family to find opportunity elsewhere … Echoes of War is an entertaining tale of fiction that will make your heart melt and sing and shatter.’ Glam Adelaide

‘Echoes of War is a powerful novel about powerful women … a powerful evocation of a time, a place and a cultural vision which provided a significant boost to Australia’s population and its development as a multi-cultural destination of choice for refugees – both voluntary and choiceless.’ Carpe Librum