Listen to the first chapter of Ciao Bella! read by Kate Langbroek

Read an extract from Ciao Bella! by Kate Langbroek

There is a lot of talk in this world about making dreams come true.
Dare to dream, we are told. Chase your dreams. If you can dream it, you can do it.
Well, in 2016 I had a dream. My dream – shared so fully and immediately with my husband Peter Lewis that neither of us can remember the moment we actually formulated it – was to live in Italy for a year. For us it meant a circuit breaker; an adventure; a chance to spend more time with our four children – Lewis, Sunday, Artie and Jannie – in a country we had been swept away by since our first visit in 2015.
But all dreams dissolve in waking hours and when uttered aloud in the stark light of day suddenly seem like madness. We didn’t speak Italian. We knew no one in Italy; in fact, we had only been in the country for a few weeks on rose-tinted, aperol-spritz-toasting, basil scented holidays. My parents hated the idea. I also had the best job in the world: hosting a top-rating afternoon drive radio show with my friend and colleague of eighteen years, Dave Hughes – in Australia. Not in Italy. As for the children, by the time we planned to leave on our grand adventure, two of them – Lewis and Sunday – would be teenagers, reluctant to uproot their lives, and leave all they knew.
So what we swiftly discovered was this: the world doesn’t necessarily share your dream.
This is the story of an Australian family making their way across the world to a foreign land, trying to find an apartment, a car, a supermarket, a basketball team, a school, a cafe that would serve them a cappuccino after 11am (no milka after morning!) and – hopefully – their place in a foreign place.
And it is also the story of our sixteen-year-old son, Lewis Lewis. The boy who lived. The child who at six was diagnosed with childhood leukaemia and survived – and who, because of this, was the unwitting motivation behind our bold move. The deep irony is that, though we wanted to seize life because he nearly lost his, he would rather not be in Italy.
It is about the day-to-day of Italian life, trying to learn a new language and make new friends, and what you discover about yourself when you are a stranger in a strange land.
It is about stepping up and falling down. On cobblestones.
It is about the Australian spirit – about wearing thongs as footwear and leaving the swimming pool with wet hair and laughing when many would weep.
It is about fear and courage; about having a dream and living it.
Mostly, it is about love. 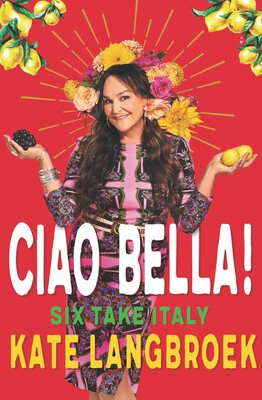 Kate Langbroek’s deliciously funny, irreverent and inspiring memoir about moving to Bologna with her family to seek la dolce vita is a glorious reminder of what we can learn from the Italians about living life to the full – and what really matters when the world goes to hell in a handbasket.