We all tell stories. It’s how we communicate our needs, joys and troubles to the world. Telling stories is what I do. It’s what we all do. It’s how we relate to each other and engage as human beings.

All of us know how to tell a story but some of us are better storytellers than others. The main character of ‘The Improbable Life of Ricky Bird’ is an exceptional storyteller. Ricky Bird has a remarkable talent for reimagining and repackaging the world around her. Storytelling is her special talent, her way of gift-wrapping her truth.

When Ricky encounters trouble and has no one she can turn to or trust, it’s her stories that carry her through. She throws them out like a radar to see what bounces back. A good or funny story will attract acceptance and friendship. A clever or absurd story will help deflect conflict. As the novel progresses and Ricky finds herself increasingly isolated and silenced, her stories become urgent.

I created Ricky Bird for those without a voice, to the young people who are not only preyed on but who are then discredited and silenced when they try to sound the alarm. This is the dilemma of young people who find themselves in a dangerous situation where, because of their age and inexperience, have no control or power. Those with power can simply say, ‘No, that’s not true. What I say is the truth.’ Who are you going to believe, a charming, responsible adult or a troublesome teenager known for telling stories? The person with the power controls the narrative. The adult with power denies the reality of the young person.

When my novel begins, Ricky is a live wire, one of those big personalities who lights up a room with her spirit and humour. She is full of energy and purpose, strong in the belief that she is safe and loved.

However, things are changing for Ricky who has been uprooted from her home and transplanted into a new and alien place where she knows no one. Nearly everything that has defined her including the relationship with her father has been left behind. She is struggling to adjust and understand, to find a foothold and identity in this new hostile environment.

Ricky is vulnerable and very much alone, unsure of who to trust. She becomes increasingly isolated from the people who should be protecting her. She doubts herself and her support network. Fear and confusion undermine her confidence. Her behaviour becomes erratic and problematic. She becomes the problem and when you are a problem, no one wants to listen even when what you are trying to do is sound the alarm.

If only someone would pay attention, Ricky is trying to say: ‘Look at me. See me. Hear me. Help me. I have something to say and it is urgent and important.’ 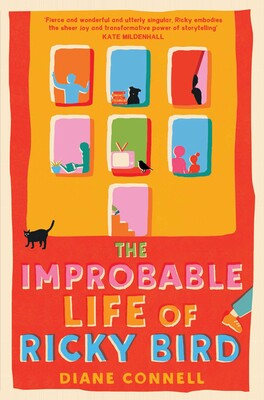 The Improbable Life of Ricky Bird
By Diane Connell

If you were charmed by The Curious Incident, laughed with Eleanor Oliphant and cried over A Man Called Ove, you will love Ricky Bird.

No one loved making forts more than Ricky. A fort was a place of safety and possibility. It shut out the world and enclosed her and Ollie within any story she wanted to tell ...

Ricky Bird loves making up stories for her brother Ollie almost as much as she loves him. The imaginary worlds she creates are wild and whimsical places full of unlimited possibilities.

Real life is another story. Ricky’s father has abandoned them and the family has moved to a bleak new neighbourhood. Worse still, her mother’s new boyfriend, Dan, has come with the furniture.

But Ricky Bird is a force to be reckoned with. As the mastermind of so many outlandish adventures, her imagination is her best weapon. As her father used to say, if you can spin a good yarn you can get on in life.

The trouble is that in the best stories characters sometimes take on a life of their own and no one, not even Ricky, is able to imagine the consequences.

Beautifully written, heartbreakingly funny and deeply moving, this book has already been compared to The Curious Incident of the Dog in the Night-time, Lost and Found, Shuggie Bain, Eleanor Oliphant is Completely Fine and A Monster Calls. But Ricky’s story is all her own – and it will stay with you long after the last page.

‘Fierce and wonderful and utterly singular, Ricky embodies the sheer joy and transformative power of storytelling.’ Kate Mildenhall, author of The Mother Fault and Skylarking

‘A wise, tender but unflinching portrait of an ordinary family and the unordinary girl at its heart. Ricky – fragile, tough, endearing and funny – is a fabulous creation. She'll walk around in my world all year, and more.’ Kristina Olsson, award-winning author of Shell and Boy, Lost