THE INSPIRATION BEHIND RETURN TO BERLIN

The idea for Return to Berlin came from an anecdote I stumbled across while researching my earlier novel, Paris Never Leaves You.  I won't relate the incident.  It would be a perfect spoiler for the book.  But while I knew I couldn't use it in Paris Never Leaves You, I could not get it out of my mind.  The heartbreak of it haunted me.  The moral conundrum nagged at me.

The occurrence involved a teenage boy who makes a split second decision that will shape his survival and that of his entire family.  Was his action right or wrong?  Was there a right or wrong under the circumstances?

As the situation continued to plague me, it became more personal.  Because I am a woman and feel closer to a woman's reactions, sensibilities, and plights, though of course I write about men as well, the character of Millie began to take shape in my imagination.  By the time I began to write, I knew the bind Millie would be caught in and the choice she'd make.  What I didn't know was how her decision, made on the spur of the moment, or so she thinks, would shadow the rest of her life.  In one sense she goes on.  In another, she never gets beyond.  She is riddled with guilt.  She hangs on to hope.  Surely, her action can be undone.  Surely it could have had other consequences than those she fears.

Hope drives Millie back to Berlin.  Desperation to assuage her guilt, or at least deflect it, shadows her daily life in the city and colors her every interaction, with the brother who shares the memory of that moment of decision, the Americans she works with in the denazification office of the Occupation, and the Germans whose welfare and future she controls.  Before she returned to Berlin, she hated with a vengeance.  Face to face with individual Berliners, her reactions become more complicated, her convictions more nuanced.

The deeper I plunged into the story, the more obsessed I became with the issue of forgiveness and its iteration in more recent times.  The stories of reconciliation projects in South Africa, Ireland, and other societies torn apart by racial or religious hatred are at once almost impossible to fathom and stunningly hopeful.  How do we forgive those who have murdered our families, stolen our histories, cast doubt on our very humanity?  What incidents would induce Millie to begin to see Germans not as a race of enemy barbarians but as fellow human beings?  And perhaps most important of all, how do we forgive ourselves as well as others?  That is the question Millie struggles with.  That is the issue that is at the core of Return to Berlin. 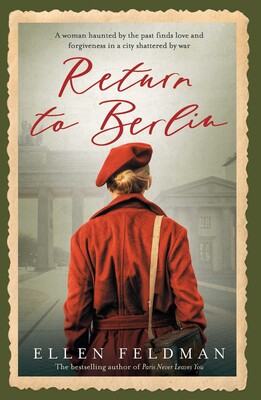