prologue
Have you ever asked yourself what kind of story the story of your life is? I always thought mine would be a coming- of- age story. A smalltown girl making it in the big city; like Melanie Griffith in Working Girl or Dolly Parton in 9 to 5. Sure, I’d struggle for everything I achieved but, in the end, my plucky can- do attitude would ensure I’d triumph over whatever obstacles stood in my way.
Like Legally Blonde or Pretty Woman or Pride and Prejudice, the story of my life would be an uplifting comedy, in turns fun and moving and aspirational. I’d be strong and spunky and a riot to be around. I’d be beautiful and smart and kids would love me. That’s what I thought. But now – looking down at the gun in my hands, feeling the heft of it, it’s cold reality in my palm – I’m not so sure I got the genre right.
In fact, I’m not even sure I’m the main character anymore.
1
The Good with the Bad
Friday 5 February
Sometimes, no matter how hard you try, you just can’t disappear. There’s nothing you can do to melt back into the crowd around you, no matter how hard you wish you could.
The tube carriage rattles and jolts around us as we clatter along the tracks deep beneath the streets of London. And I feel it again, the familiar tug of the stranger’s eyes on me, staring.
I’ve been in their house. Or at least they think I have, but I don’t know them. We’re friends already, or we’re enemies, but I don’t know which. I’m part of some story they love or hate. I’m part of the story of who they are. They’ve rooted for me, cried with me, we’ve shared so much, and now I am right here in front of them. Of course, they’re going to stare. I’m the unrealnmade real. On the fringes of my awareness I feel the figure finally break the connection, and whisper to the person beside them. I try to focus on my novel, to let my breath deepen, and the story wash over me once more.
All those gazes, like robins alighting on me and fluttering away, wary but interested. I know people always stare at each other on the tube. But these days it’s different. The carriage rattles on shuddering around us. Since the show started airing, four weeks ago, I’m lucky to get through any journey without some kind of interaction from strangers. A shy smile. A tap on the shoulder. A selfie. A handshake. A late- night drunken gush. Or a hastily scrawled note. And sometimes even, quite confusingly, a scowl.
I don’t mean to sound ungrateful; I love my job. I genuinely can’t believe how lucky I am. But sometimes it feels like I’m at the wedding of a couple I don’t really know. My face aching from meeting so many well- meaning and complicated strangers, whilst all the time, all I want to do is bob to the bathroom so I can get away and finally relax.
I don’t feel threatened by it, exactly, I know I’m safe. Although, of course, I know it’s not always safe. I learnt that the hard way, a month ago, when the police showed up in my living room after countless calls and emails, finally taking notice when my agent stepped in.
He’d been waiting outside the theatre, every night. Not particularly strange or concerning. Just an ordinary man. I’d leave the stage door tired from work. I’d gone straight from filming on Eyre into The Doll’s House in the West End. At first, he just wanted a signed programme, and then a chat, and then longer chats that got harder to leave until finally he was following me to the tube station still talking. I had to start leaving with friends. I had to be chaperoned. One day he couldn’t stop crying, this stranger in his fifties. He just walked behind me and my friend, silent tearsmdripping down his slack face. His name was Shaun. I’d tried to sort it out but it wasn’t until my agent received a package that the police took it seriously. He was just a stalker. Not even a stalker really, just a lonely man trying to make friends. I told the police that, of course, but they insisted on following it up, issuing an official warning. I think his wife had died recently. They wouldn’t tell me what was in the package he sent. I jokingly asked if it was a head, and they all laughed, so I guess it can’t have been a head. I felt guilty about what happened; the friendlier I had been, the worse it had got and I only strengthened his perceived connection to me. I hope he’s doing better now. I wish they’d just told me what was in the package straight away, because instead I spent a week imagining the absolute worst. Weird photos. Skin. Teeth. Something his wife had owned. It was just a stuffed toy in the end and a slightly unsettling poem. But it’s hard not to think the worst when you’re trying not to think the worst. I know not everyone is strange. But some people are.
At the next stop as I gather my things and disembark, a few eyes follow but when I surface at Green Park and the cold January air hits me, cooling my flaming cheeks, I chalk today’s trip up as a success.
No incidents this trip, no drunken football chants demanding I, ‘Say it! Say it!’
Who knew Jane Eyre had a catchphrase?
Who knew Arsenal supporters read Brontë?
And, yes, in case you’re wondering – much to my shame – reader,
I said it. 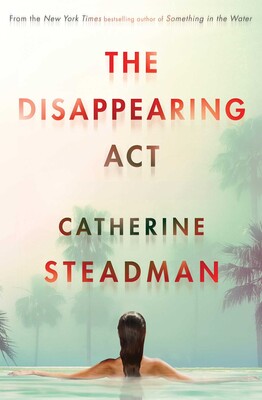 The Disappearing Act
By Catherine Steadman