Revenge, vengeance, and forgiveness - the inspiration behind The Heights

The Heights is concerned with revenge, specifically with choosing vengeance over forgiveness, and it is this that propels our narrator, Ellen Saint, into a hair-raising crime.

The tragedy that sets her quest in motion involves a joy ride, when a car is driven into a reservoir, with one survivor and one fatality. This was inspired by the Chappaquiddick Incident of 1969. For those who don’t know it, Senator Ted Kennedy was driving a political aide, Mary Jo Kopechne, on Chappaquiddick Island, Massachusetts, when he crashed his car off a bridge and into the water. Though he escaped unhurt, he failed to seek help for his passenger and she was left in the submerged car to die. The agony her loved ones must have suffered knowing that she might have survived had a rescue attempt been made sooner is almost unimaginable. Ellen experiences a similar kind of pain; her response, however, is extreme.

The other tragedy that takes place in The Heights is of the kind we’ve seen before on screen and in books: someone falls to their death from a height. The question, usually, is did they jump or were they pushed? I ask if it possible for it to be both, if there is ever a set of circumstances that justifies saying it hardly matters.

Ellen suffers from high place phenomenon. This is not vertigo, but a form of fear of heights in which intrusive thoughts urge you to jump when you really don’t want to. If she’s to take the revenge she wants to, she has to overcome this phobia. Regular readers of mine will know that I often explore a phobia in my thrillers (claustrophobia in The Other Passenger; carcerophobia – the fear of prison – in Our House). I’m fascinated by them because they compel those afflicted to avoid a situation at all costs, to develop safety behaviours that can take suspense plots in unexpected directions.

As with all my twists and reveals, I planned those in The Heights early on. The structure is a bit of a reveal in itself: it’s inspired by society’s fascination with true crime and our apparent willingness to believe what we’re told. When I first began plotting, I intended Ellen to narrate the whole book in the form of her memoir, which we see her writing in a class taught by a well-known tutor. But I quickly realised the limitations of this. How would the reader know if her version of the truth matched that of other people’s? You can own your own statement, but you can’t own theirs. I introduced a second narrator in the form of her ex-partner, Vic, but I wanted readers to burrow deep into Ellen’s mind before being given an alternative. Then, just when you’re on board with Vic’s account, you’re back with Ellen again, possibly with a little healthy scepticism this time around.

I’m really interested to see which twists and revelations will work. Sometimes a twist will catch on and readers exchange gasps on social media; other times, they’ll say, ‘Oh, I guessed that right from the start’. It’s exhilarating for me to experience those responses. I always remind myself that once a book is published, it belongs to the reader, and when I’m discussing my own work, I don’t feel I’m the ultimate authority. All interpretations are valid – though I admit I prefer some to others! 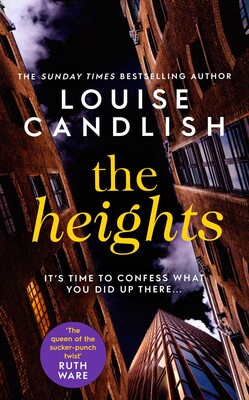 FROM THE BESTSELLING AUTHOR OF OUR HOUSE, WINNER OF THE CRIME & THRILLER BOOK OF THE YEAR AWARD, COMES A NAIL-BITING STORY OF TRAGEDY AND REVENGE