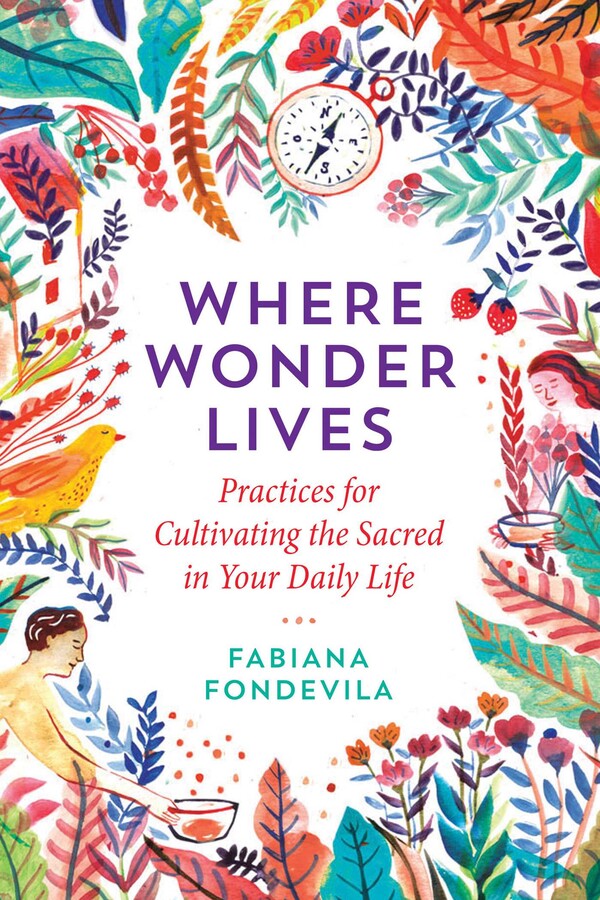 Practices for Cultivating the Sacred in Your Daily Life

Take a journey by map through your inner landscape to discover a life of awe, enchantment, and radical aliveness

• Explains how experiencing awe and wonder can transform our lives, leading us to feel more satisfied, peaceful, and open to others

• Offers contemporary and time-honored practices--from mindfulness to dreamwork and working with plants--that help you reconnect with Nature and your imagination, open your heart, and find vitality and enchantment

• Explores ways of examining and embracing our shadow, deepening our relationships, and creating meaningful personal rituals

Where Wonder Lives invites you on a journey, an expedition through your own inner landscape to reawaken to the mystery of life. The travels are by way of an imaginary map through 9 distinct territories. In each, you explore the terrain, then are led to a rich set of contemporary and time-honored practices--from mindfulness to dreamwork, cloudscapes, and working with plants--that help you rebuild a life of vitality, connection, and enchantment.

There is no prescribed order in which to explore the map. Rather, the invitation is to begin at the territory that calls to you, or perhaps that which is most challenging. Each territory reflects and amplifies the others, and you will instinctively arrive at the practices that you need most. The Jungle delves into our original deep kinship with Nature and helps you rekindle your inner wildness. The Garden takes you on a journey through your senses, and the River unfurls your imagination. The Mountaintop presents a bird’s-eye view of your life, while the Swamp delves into your inner shadow and delivers gold. The Village helps us deepen our bonds and relationships, the Lighthouse teaches us to quiet our minds, and the Fire inspires us to create meaningful ceremonies and personal rituals. The Ocean looks into the topography of the heart and offers practices to awaken the heart’s most powerful emotions: awe, joy, compassion, gratitude, and love, the mother of them all.

Throughout the journey you are immersed in a world of wonder and awe, discovering new possibilities for learning and expansion in ordinary life. Face to face with the mystery of life, Where Wonder Lives makes you feel at once both infinitely small and part of a vast, unfathomable universe--all while helping you to see the world anew.

From “The River: Let Your Imagination Flow”

The garden leads to a meadow. We walk through tall grasses, their tips golden in the midday sun. In the distance we hear a soft murmur and we recognize the sound of running water. That is where we head. As we approach we feel a freshness that stimulates the skin and enlivens the senses. And then we see it: a bubbling watercourse, crystalline, flowing out at a steady pace. Colorful ducks paddle across the surface, while on the bank a turtle warms itself in the sun. The waters suddenly part in the perfect parenthesis of a leaping fish. We wet our faces and our hair. At last, we give in to temptation and slip into the water. We lie back facing the clear blue sky and let ourselves be carried away by the river.

How often have you felt like this, as if you were transported elsewhere by a magic carpet, without ever having travelled anywhere? The carpet that takes us to unsuspected places is called "imagination" and is one of the prodigies that evolution (or grace) has bequeathed to human beings.

This complex and exquisite faculty opens the doors to the past and the future, to our creativity, to a life permeated by magic and meaning, and to worlds inaccessible by any other means.

Let's look at some of the amazing achievements of this gift. Thanks to imagination you can:

● Bring to mind objects and situations that are out of the reach of your senses: for example, visualize the Eiffel Tower. You can add other imagined sensations to this image: auditory impressions (the sound of a man playing a saxophone at the base of the tower), olfactory (the aroma that wafts over to you from a nearby bakery), gustatory (the taste of a freshly baked baguette eaten after visiting the tower), and tactile (the crunchy crust of the baguette).

● Bring to mind objects and situations that do not exist in physical reality. Without much effort, you can visualize dragons, unicorns, mermaids, underwater cities, and any supplementary imaginings evoked by each of these.

● Travel to the past – remembering and reliving events that occurred before the present moment – and into the future, as you plan, anticipate, or dream about events that may or may not occur.

● Play at creating fantasy worlds, starting from premises such as, “what would happen if...?” or “let's pretend that...” Play is not just for children; we adults also need this vital elixir to keep our bodies young and our hearts happy.

● Create, which means putting imagination into action in any field of life. Art is what happens when the mind plays with an aesthetic or expressive intention; but creativity can be applied to any activity: from how you dress to how you personalize a recipe that you are given. More than a human right, to create is a human need: we can’t help doing it even if we try not to.

● Explore inner words: the universe of dreams, daydreams, and your deepest intuitions. Visualize the inner workings of your body and influence organic processes, using your mind to collaborate with healing processes.

● Visit out-of-the-ordinary realities that are inaccessible to the senses, such as those that have been described by shamanic cultures since the beginning of time. These phenomena are not “imaginary,” in the sense of being illusory, but belong to the “imaginal world,” a dimension of existence known to mystics and the people of ancient civilizations who lived in the reality of visions, myths, and archetypes. Australian aborigines call this realm the Dreamtime; although it is a space more than a time and they consider it more real than any empirical reality.

Many people regard the imagination with suspicion, as something that has no place in adult life, but this is precisely because they are unable to understand these meanings of the word. In contrast, the wisdom traditions teach that the imagination is one of the most important, most direct channels to the divine, and probably one of the oldest. In The Evolution of Imagination, Stephen T. Asma describes the imagination as “the eye of ancestral man” and considers it a human skill acquired before language. Thomas Moore, speaking from a spiritual perspective, in The Care of the Soul proposes:

“The key to seeing the world’s soul, and in the process wakening our own, is to get over the confusion by which we think that fact is real and imagination is illusion.”

Another scientist, Albert Einstein, defies convention when he asserts:

Let's look at some of the many ways we can explore this fantastic river and see what surprises it can offer us.

Before leaving home, formulate a question for which you would like to receive guidance or orientation. After you leave home, the first three things that attract your attention in a specific time frame (your journey to work, a walk around the block, a trip on public transport) will give you the answer. You may be drawn to a captivating headline, overhear a fragment of conversation, notice a phrase on a billboard, or be fascinated by a formation of clouds in the sky. The oracle will tell you what the hidden message is in this succession of “random” images.
Fabiana Fondevila

“Fabiana Fondevila accompanies us into a beautiful maelstrom of insights and sources of inspiration in order to reconnect us with nature through wonderment, with the best part of ourselves through recognizing our basic goodness, and with others through loving kindness and compassion. A book for inner enrichment.”

– MATTHIEU RICARD, author of Altruism: The Power of Compassion to Change Yourself and the World

“Where Wonder Lives is one of the most intelligent, imaginative, and useful books I’ve seen in years. Truly, it is fun and enlightening, concrete and full of rich ideas. I have never seen deep intelligence and sensuous imagination come together so beautifully. It is practical and impractical, thoughtprovoking and full of charm.”

– THOMAS MOORE, author of Care of the Soul

“This is a book that speaks to the wild spaces that still live in us, longing to be awoken. It is beautiful and wise and filled with practical and powerful exercises. Every page is a seed of possibility, a glimpse at a more beautiful and vibrant future that is still within our reach. To read Fondevila’s words is to forever transform the way you look at both nature and human nature.”

“Where Wonder Lives gives us tools and potions to re-enchant our world. Fabiana Fondevila encourages us to dream with our senses--face down in the grass, reading clouds, speaking the language of birds, sipping dandelion wine. She wants us to taste our feelings and choose those that nourish the heart. She guides us through a rich imaginal geography--from swamp to mountain, from fire to ocean--in which each locale becomes a portal for adventure, soul remembering, and deepening practice. She reminds me of the most important guidance I ever received from that inner voice you learn to trust: ‘Remember this world is your playground not your prison.’ She invites us to make more space to play with our Magical Child and bring the joy and energy of that great imagineer into everyday life.”

“This is a special book because of the creative aliveness that leaps from every practice and every page. It is ‘good company,’ a vivid soul-to-soul gift of poetic textures, colors, images, and stories. This generous heart-gift shares initiations from nine sacred territories. If you accept them (in any order, by the way!), you’ll keep being invited into deeper presence, joy, laughter, and wonder of wonders--this sacred and miraculous now-moment.”

– TERRY PATTEN, author of A New Republic of the Heart and co-author of Integral Life Practice

“Where Wonder Lives is a book you’d invite to travel the world with you. Language, myths, ideas, and clarity from many cultures and beliefs are all brought together to help us remember what is common among us in the intricate web of life. Through captivating journeys, playful practices, and researched science, Fabiana invites her readers to shift from the mirage of manageable complexity to the wonder of unmanageable simplicity. It’s a book whose ideas and words can massage and reorient our innate intuition. As she quotes her own daughter, ‘It’s a good thing you’re studying this, Mum, so I won’t have to learn it from books.’ What a wonder!”

“Wonder lives right here, in these beautifully lyrical pages that invite and entice us to play in Fabiana’s magical realm and reconnect with our deepest wonder-full essence. This is a book that weaves insights from science, psychology, philosophy, myth, and the arts with playful practices that can deliver profound positive change. These pages offer an embodied and sacred experience as well as a return to the very sense of wonder that charmed you, as a child, to see not clouds but the shapes and stories they painted across the sky and deep in your heart. It is one of those books that people will not want to lend out but instead keep at hand to delve into time and time again.”

Practices for Cultivating the Sacred in Your Daily Life