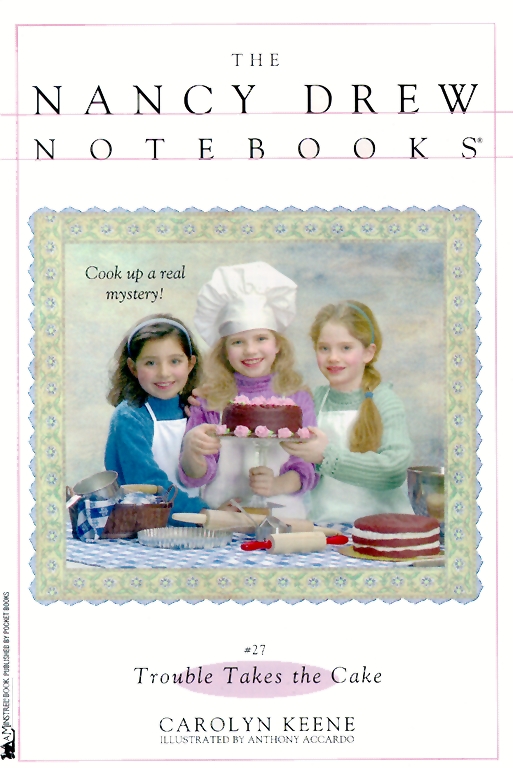 SOMETIMES, YOU REALLY HAVE TO WATCH WHAT YOU EAT....
At Haunted Harriet's restaurant you can have Boo Burgers, Franken-furters, and Monster-Mash Potatoes. But for Nancy, the real trouble is the creepy, crawly cake that goes ker-plooey!
When a snooty birthday girl gets cake-slimed, Nancy may get the blame. But make no mistake, Nancy will find out who really put the glop in the cake -- no matter who's cooking up trouble!

Chapter One: Boo Burgers and Franken-furters
"Is Keller's really the biggest department store in the world, Aunt Eloise?" eight-year-old Nancy Drew asked as they walked through the spinning doors.
"Bigger than the one in River Heights?" Nancy's best friend Bess Marvin asked.
"See for yourself, girls," Aunt Eloise said when they were inside the store.
"Awesome!" Nancy cried. She pushed back her reddish blond bangs so she could see everything.
The store was filled with shoppers. Rows of counters were covered with makeup, handbags, and colorful gloves. There was even a man playing a piano under a huge chandelier.
Nancy's other best friend, George Fayne, whistled. "This store makes the one back home look like a lemonade stand!"
Nancy couldn't have been more excited. Her aunt Eloise Drew had invited her, Bess, and George to New York City to spend a three-day holiday weekend.
Aunt Eloise rubbed her hands together. "Let's shop till we drop, girls!" she said.
"Your aunt is so cool," Bess whispered to Nancy as they walked through the crowd.
"And she's a teacher," Nancy added. "Can you imagine her class trips?"
George stopped walking. She wrinkled her nose. "What's that stinky smell?"
Nancy saw that they were passing a row of perfume counters. "It must be all the perfume," she said.
A woman in a black dress stepped in front of them with a small glass bottle.
"Hello! Would you care to try Beautiful Blooms?" she asked.
George jumped behind Nancy. "Yuck! Don't let her squirt me with that stuff."
Bess held out her wrist. "I'd like to try some, please," she said.
Nancy laughed. Bess and George were cousins, but they were totally different.
Aunt Eloise tried the perfume, too. Then they rode the escalator to the toy department on the seventh floor.
"I've never seen so many toys!" Nancy said. She gazed at shelves filled with games, dolls, and stuffed animals.
"I'm going to buy some art supplies for my class," Aunt Eloise said. "Stick close together and don't wander off."
Nancy and her friends nodded. Then they stared at the toys.
"I want to check out the sports equipment," George said.
"A pink bicycle!" Bess cried. Her blond ponytail bounced as she ran to it.
Nancy walked around slowly.
I want something that will remind me of my trip to New York, she thought.
Then she saw it. Her favorite fashion doll stood on a shelf, dressed as the Statue of Liberty. The doll wore a flowing green gown and the famous Miss Liberty crown.
"It's perfect," Nancy whispered. She picked it up carefully.
But just as she was about to show it to Bess and George, she felt someone yank it out of her hands.
"It's mine!" said an angry voice.
Nancy looked up. A girl with curly brown hair clutched the doll to her chest. She wore a red coat and matching hat.
"What do you mean it's yours?" Nancy asked as Bess and George ran over.
The girl stuck her freckled chin in the air. "My mother said I could haveanything I want today. And I want this!"
"Give me a break," George mumbled.
Nancy sighed. "If you want it that badly, then take it," she told the girl.
"Now, why don't you be like Little Bo Peep's sheep and get lost!" George said.
"Very funny. Ha. Ha," the girl muttered. Then she huffed off.
"Why did you let her have the doll, Nancy?" Bess asked. "It was the only one."
Nancy shrugged. "I don't want to spoil my trip to New York City by fighting with a snooty-nosed brat."
"Oh, well," George said. "At least you'll never see her again."

Instead of the doll, Nancy bought a stuffed bear wearing a New York City T-shirt. George bought a soccer ball keychain. Bess bought a plastic bracelet.
"I hope shopping gave you a big appetite," Aunt Eloise said. "Because our next stop is Haunted Harriet's."
"Haunted Harriet's?" Nancy asked.
"It's a restaurant, and the theme is a haunted house," Aunt Eloise explained.
"Uh-oh," Bess said. "Sounds spooky."
"Don't worry," Aunt Eloise said. "Harriet is a good friend of mine. We were roommates in college."
"What was she like?" Nancy asked.
"Harriet always loved spooky movies and costumes," Aunt Eloise said. "She once slipped a rubber spider under my pillow."
"Neat!" George cried.
"I think you'll like Haunted Harriet's," Aunt Eloise said. "They have great Boo Burgers and Frankenfurters."
Aunt Eloise hailed a taxi. They piled in and rode down a street called Broadway.
"There are so many people in New York," Bess said as they stared out the window. "Can you imagine solving a mystery here, Nancy?"
Nancy smiled. She was the best detective at Carl Sandburg ElementarySchool. She even had a blue detective notebook where she wrote down her clues.
"Nope," Nancy said. "But I brought my detective notebook just in case."
The taxi stopped in front of a building wrapped in cobwebs. Aunt Eloise paid the driver, and they went inside.
Nancy's eyes sparkled. "This place does look like a haunted house," she said.
"The waiters and waitresses are dressed like monsters!" George exclaimed.
A man dressed as the Hunchback of Notre Dame limped over. "I have a hunch you're the Drew party. Follow me to the dessert kitchen."
The girls giggled as the hunchback led them into a bright kitchen. A woman with black hair came out from behind a counter.
"Eloise!" the woman cried. She ran over and gave Nancy's aunt a hug.
"Hi, Harriet," Eloise Drew said. "I'd like you to meet my niece, Nancy."
"Hello," Nancy said. "These are my best friends, Bess and George."
"Welcome, girls," Harriet said.
"Do you own the restaurant and bake, too?" George asked Harriet.
"Yes, but I have help," Harriet said. She walked over to a young man standing by the oven. "Meet my assistant, Scott. He just graduated from cooking school."
Scott waved shyly. Nancy noticed a large pocket on the front of his apron.It was filled with shiny baking tools.
"Scott is such a good baker, he has his own cabinet," Harriet said. She pointed to a cupboard with Scott's name on it.
Nancy looked around and saw a table filled with chocolate cakes. "Those cakes look yummy, Harriet," she said.
"One of the cakes is going to a special birthday girl," Harriet said.
"Which cake?" Nancy asked.
"Why don't you choose?" Harriet asked.
Nancy knew which cake to pick. "That one," she said, pointing to the fourth cake. "The one with the pretty pink roses."
Harriet picked up the cake. "I'll put candles on it right now," she said.
"Who is the birthday girl, Harriet?" George asked.
"Just look out the door," Harriet suggested. "She's sitting with her mom next to the mummy's tomb."
The girls ran to the kitchen door and peeked out. Then Nancy groaned.
"What's wrong, Nancy?" Bess asked.
Nancy wrinkled her nose. "It's the snooty girl from Keller's Department Store!"