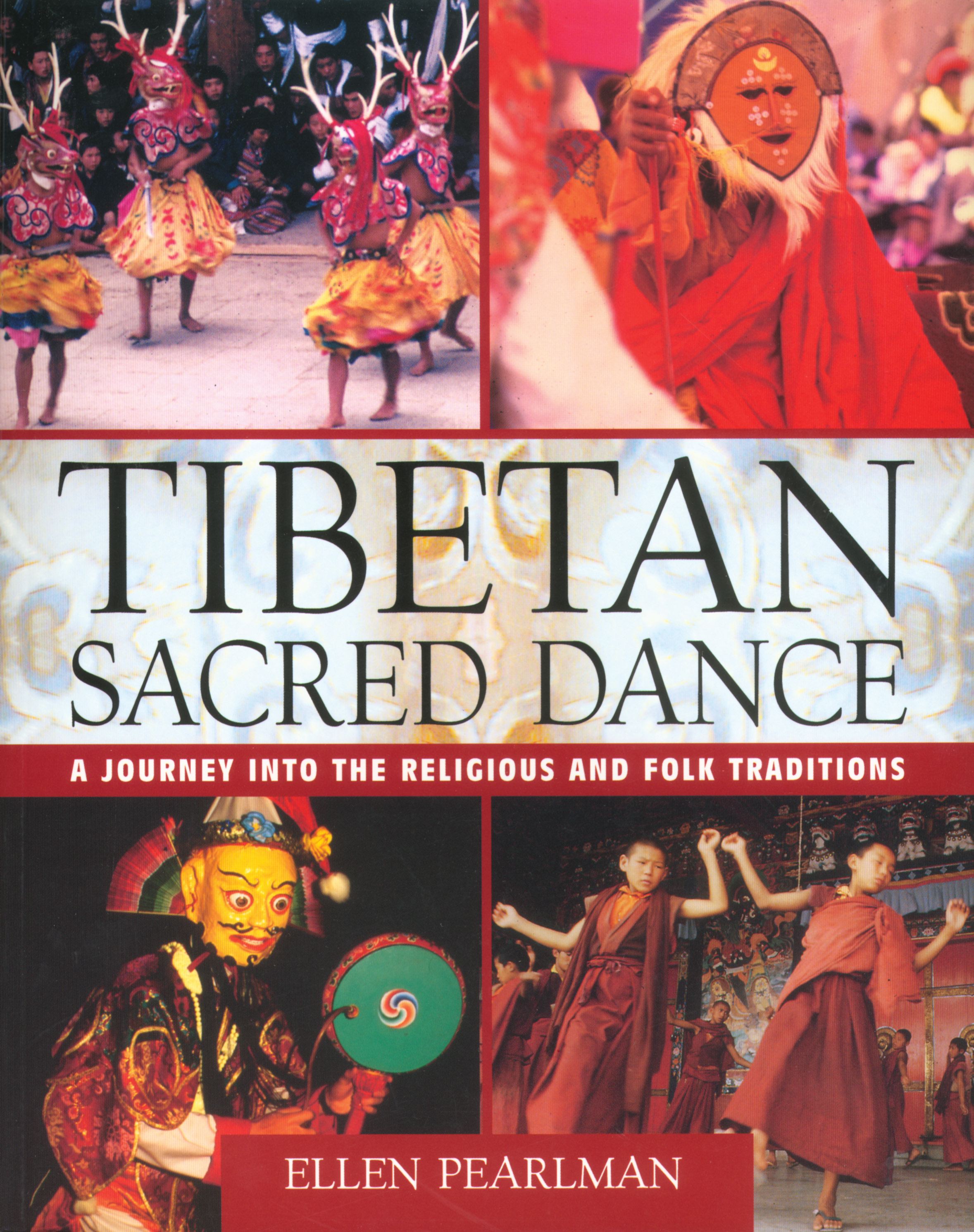 A Journey into the Religious and Folk Traditions

The first book to explore the significance and symbolism of the sacred and secular ritual dances of Tibetan Buddhism.

• Looks at both sacred (cham) and folk (achi lhamo) forms and their role in the development, practice, and culture of Tibetan Buddhism.

From the time Buddhism entered the mythical land of the snows, Tibetans have expressed their spiritual devotion and celebrated their culture with dance. Only since the diaspora of the Tibetan people have outsiders witnessed these performances, and when they do, no one explains why these dances exist and what they really mean. Ellen Pearlman, who studied with Lobsang Samten, the ritual dance master of the Dalai Lama's Namgyal monastery in India, set out to discover the meaning behind these practices. She found the story of the indigenous shamanistic Bon religion being superseded by Buddhism--a story full of dangerous and illicit liaisons, brilliant visions, secret teachings, betrayals, and unrevealed yogic practices.

Pearlman examines the four lineages that developed sacred cham--the secret ritual dances of Tibet's Buddhist monks--and achi lhamo storytelling folk dance and opera. She describes the mental and physical process of preparing for these dances, the meaning of the iconography of the costumes and masks, the spectrum of accompanying music, and the actual dance steps as recorded in a choreography book dating back to the Fifth Dalai Lama in 1647. Beautiful color photographs from the Tibetan Institute of Performing Arts and Pearlman's own images of touring monastic troupes complement the rare historic black-and-white photos from the collections of Sir Charles Bell, chief of the British Mission in Tibet during the life of the Thirteenth Dalai Lama.

"In a meditative state...the dance comes out of that...In tantra oneself becomes the Buddha."
?Lobsang Samten, ritual dance master of the Namygal monks

"Only in meditation are the methods of chanting and instrumental playing revealed."
?His Holiness, The l6th Gylwya Karmapa

Cham dances are the secret ritual dances of the Tibet's Buddhist monks. They are part of an elaborate and intensive ritual initiation that lasts anywhere from one day up to two weeks. Cham dances are performed for deep emotional, psychic, and spiritual purification, and while they are now able to be witnessed by spectators, they remain in many ways a mystery.

Part of the reason for this mystery is that while we are able to observe the form of the dance, we are unable to see the deep spiritual cleansing that is occurring for the practitioner. And yet even as a spectator, when I first saw Cham dancing on my first visit to Tibet in the early 1980s, I experienced something very powerful and magical. It was like an enormous way of peace and quietude overcame my body as I sat watching the elaborate ritual. Only then did I understand the power of this practice, and I could only image the intensity of the internal experience for the practitioner himself. We will now examine the specifics of Cham dance forms, the spiritual practice that lies underneath, and the iconography present in the masks, costumes, and ritual settings.

What Is a Mandala?
Cham, or sacred dance is always performed within the confines of a mandala (circle) and is part of tantric ritual. But what does this mean to a westerner? In a mandala, everything radiates from a central point, as a maze of circles set into a series of squares. Mt. Meru, in Tibetan cosmology is the center or axis mundi of the world. It is surrounded by four continents and ruled by the sun and the moon. Mount Kailish in far western Tibet is often associated with the mythical Mt. Meru. The mandala circle works simultaneously on three levels. It is the home of the realm of the Gods. It is its own physical representation on earth. In the physical body of a tantric practitioner or Cham dancer it represents the secret channels or centers called chakras. The four limbs of a man become symbolic of the four continents. The head is Mt. Meru. The eyes are the sun and the moon. The body itself is where the deity lives. The orifices are the entrance to the mandala. This outline also corresponds to the chakras, or psychic centers, and the meeting of the nerve clusters in the axis of the body, which are called nadis.

The Cham dancer concentrates on all of these centers and chakras during a performance. Concentration and meditations are specifically taught in oral instructions passed from a tantric master to student. These practices open the chakras and purify them. The purpose in purifying these centers is the overcoming of negative obstacles and to obtain what Buddhists call enlightenment. The Vajra Kilya dance, specifically inspired by Padmasambhava's vision was said to have been performed by the master himself at this time in order to purify the physical ground for the building of the monastery of Samye, root out evil and overcome the obstacles that the Bon priests and ministers were concocting. In fact according to Padmasambhava's life story, at the cardinal points of the monastery there were stupas of Vajra Kilya.

The word mandala derives from the Tibetan word kyilkhor, kyil meaning "center" and khor meaning "fringe." It is a group or collection of something that is interlinked from the center out to the fringe. This is like saying the city of Dallas is a big mandala, linked by its roads, businesses, media and human contact, and on its fringes are ranches and suburbs.

A mandala is an Indo/Tibetan system that maps mind and consciousness. It is a psychological diagram. All of our experiences are part of our own personal mandala, or web of our own consciousness. You could extrapolate this to say nations have their own mandalas. There are collective and individual mandalas that also overlap with one another.

The Purpose of Sacred Dance
In the 5th Dalai Lama's C'hams yig texts he talks about the purpose of dance by discussing the oldest recorded cham dance, that of the Vajra Kilya. He says, "The great religious master Padmasambhava performed this dance in order to prepare the ground for the Samye monastery (the first Tibetan monastery) and to pacify the malice of the lha and srin; in order to create the most perfect conditions he performed at that time (while dancing) to make the 'consecration of the ground', inserting into the soil those of the four qualities it did not possess, the erecting of a thread-cross and zor ceremonies. This dance stands in connection with the origins of tantricism and procures great blessings."

Ellen Pearlman has been a Buddhist practitioner for over 30 years under Chögyam Trungpa Rinpoche and has studied with Buddhist teachers in India, Sikhim, Burma, Thailand, Sri Lanka, Nepal, Europe, Latin America, and North America. She lives in Brooklyn, New York.

"The Buddhist search for inner peace pervades almost every aspect of Tibetan life. One facet of that heritage that has received comparatively less attention is Tibet's sacred dance with its vivid depiction of such fundamental themes as the triumph of virtue and the supremacy of truth. This colorful book serves to redress that lapse."

– His Holiness the Fourteenth Dalai Lama

“Tibetan Sacred Dance is the first book ever written for a general audience on this fascinating subject. With beautiful photographs and accessible text, Ellen Pearlman takes us through the myriad forms and rich traditions of Tibetan dance and music.”

– Valrae Reynolds, curator of the Asian Collections, The Newark Museum

“Extraordinarily well researched and in depth.”

" . . . provides an important glimpse into Tibetan culture, history, and spiritual practice as it contributes to world culture."

" . . . a well written narrative and beautiful photographs of a culture that is rarely seen by Westerners."

". . . an engaging invitation garnering immediate access to the multidimensional and vital realm of Tibetan dance and ritual."

". . . examines the history, rituals, and iconography of cham, touching on how the traditional forms are influencing Tibetan artists today."

"This is the first book of its kind, and it can serve as an iconographic gold mine for many specialists."

"Tibetan Sacred Dance is a clear achievement in the documentation and preservation of Tibetan Buddhist dance history."

A Journey into the Religious and Folk Traditions