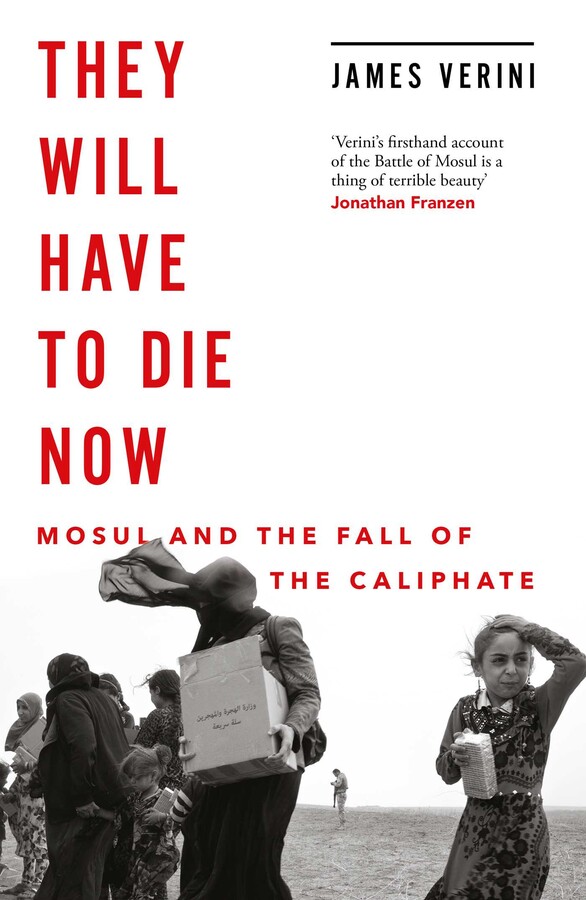 They Will Have to Die Now

Mosul and the Fall of the Caliphate

The battle is for a city. The war is for history.

In autumn 2016, Iraqi forces began operations to recapture Mosul from the Islamic State. Millennia-old, Mosul was a birthplace of Western culture but also infamous for its cruelty, from the Assyrians to Saddam Hussein. Through the eyes of soldiers and families and jihadis, award-winning reporter James Verini chronicles the combat that followed.

Among the most devastating urban conflicts since World War II, the battle for Mosul was both archaic and modern. Troops and jihadis fought house by house, block by block, matching bullet for bullet, while co-ordinating their movements on WhatsApp and uploading execution videos. Verini describes how this viciously contested patch of earth came to represent a war for the soul of a country, for its history and its future.

We drove down a street, in partial view of the minaret. Soldiers walked alongside. We were moving only a matter of seconds when one went down. The sniper’s bullet went into his back, below the shoulder blade. It must have been obscenely painful, but the soldier barely reacted. He kneeled, like an athlete who’s had the wind knocked out of him. He lurched to a curbside and sat down. He looked nothing so much as disappointed.
James Verini

‘Verini’s firsthand account of the Battle of Mosul is a thing of terrible beauty.’

‘This is such an important and deeply nuanced book. Verini paints absolutely convincing portraits of the Iraqi soldiers trying to take their broken country back, and in humanizing them, he joins the ranks of Liebling and Pyle and Gellhorn – American journalists able to embed so selflessly with soldiers, to listen first and theorize rarely, to tell a story as it happened.’

– Dave Eggers, bestselling author of A Heartbreaking Work of Staggering Genius and The Circle

‘They Will Have to Die Now is the story of what happened after most Americans stopped paying attention to Iraq. It’s a small miracle that a writer as good as James Verini witnessed the Battle of Mosul. His book is erudite, humane, bleakly funny, and unbearably sad. It will take its place among the very best war writing of the past two decades.’

– George Packer, author of Our Man and The Assassins' Gate: America in Iraq

‘James Verini plunges you into the heart of the climactic battle of the Iraq War and won’t let you leave. He seems to be everywhere, gets to know everyone, vividly chronicles everything he sees and hears—and never once calls attention to himself. The weapons may be new—drones and iPads and executions on YouTube—but the blood and confusion and betrayal are as old as war itself. They Will Have To Die Now is an astonishment.’

‘They Will Have to Die Now is a vivid, captivating, compelling, and graphic account of the major battle against the Islamic State in Iraq, the Battle for Mosul—site of the Biblical Nineveh and capital of the province where I was privileged to serve in the first year of the war in Iraq. James Verini conveys brilliantly the often tragic ancient and modern history of Iraq, and he captures superbly the brutal reality of one of the most intense urban battles since World War II. In so doing, he describes the terrible hardships experienced by the Moslawis and both the worst and the best of mankind in war, contrasting the barbaric actions of the jihadists with the desires of those who tried to rescue and to rebuild—but who nonetheless had to inflict enormous damage on the city they sought to liberate.’

‘This is a stunning book, brave in its reporting and beautiful in its writing. It is funny and sad and seared into me, and I can’t recommend it highly enough, not just to people interested in the truth of a war but to anyone in search of the truth of humanity.’

– David Finkel, Pulitzer Prize-winning reporter at the Washington Post and author of The Good Soldiers

‘James Verini’s book stands comparison with the pathbreaking works of modern war journalism that meld into great literature. One has to go back to the Vietnam War and Michael Herr’s Dispatches to find such a vivid, poignant, and historically grounded narrative of an appalling war; a war caused no little by the misdeeds, missteps, and malevolence of the myriad powers and forces that have tried to dominate the Middle East.’

‘The definitive account of one of the most pivotal and bitter military campaigns of the modern era… This isn’t typical military history, though, but an eyewitness account of what happens to ordinary people who find themselves living on the battlefield, the compromises they must make to stay alive… This is war reporting at its very best.’

‘Tough, smart, and vivid, this is a book that renders war and battle with the deft hand of a fine writer. It will haunt you, engage you, and stay with you.’

‘An urgent, scalding, hallucinatory work of war reportage, in the tradition of Michael Herr and Philip Gourevitch. His account…captures the horror, the nobility, and the sheer grinding absurdity of twenty-first-century warfare… A significant achievement.’

– Patrick Radden Keefe, author of Say Nothing, winner of the Orwell Prize

They Will Have to Die Now

Mosul and the Fall of the Caliphate