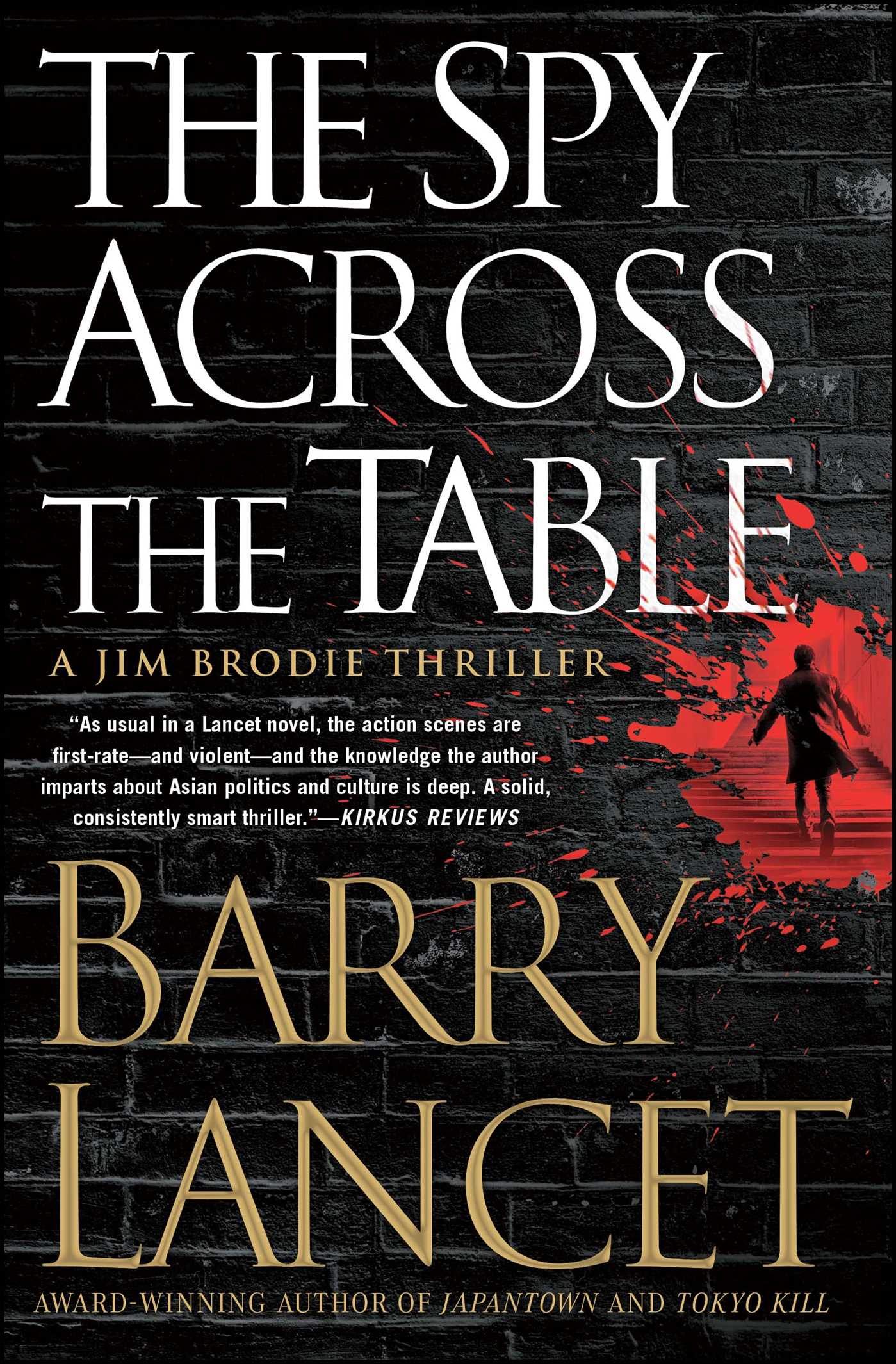 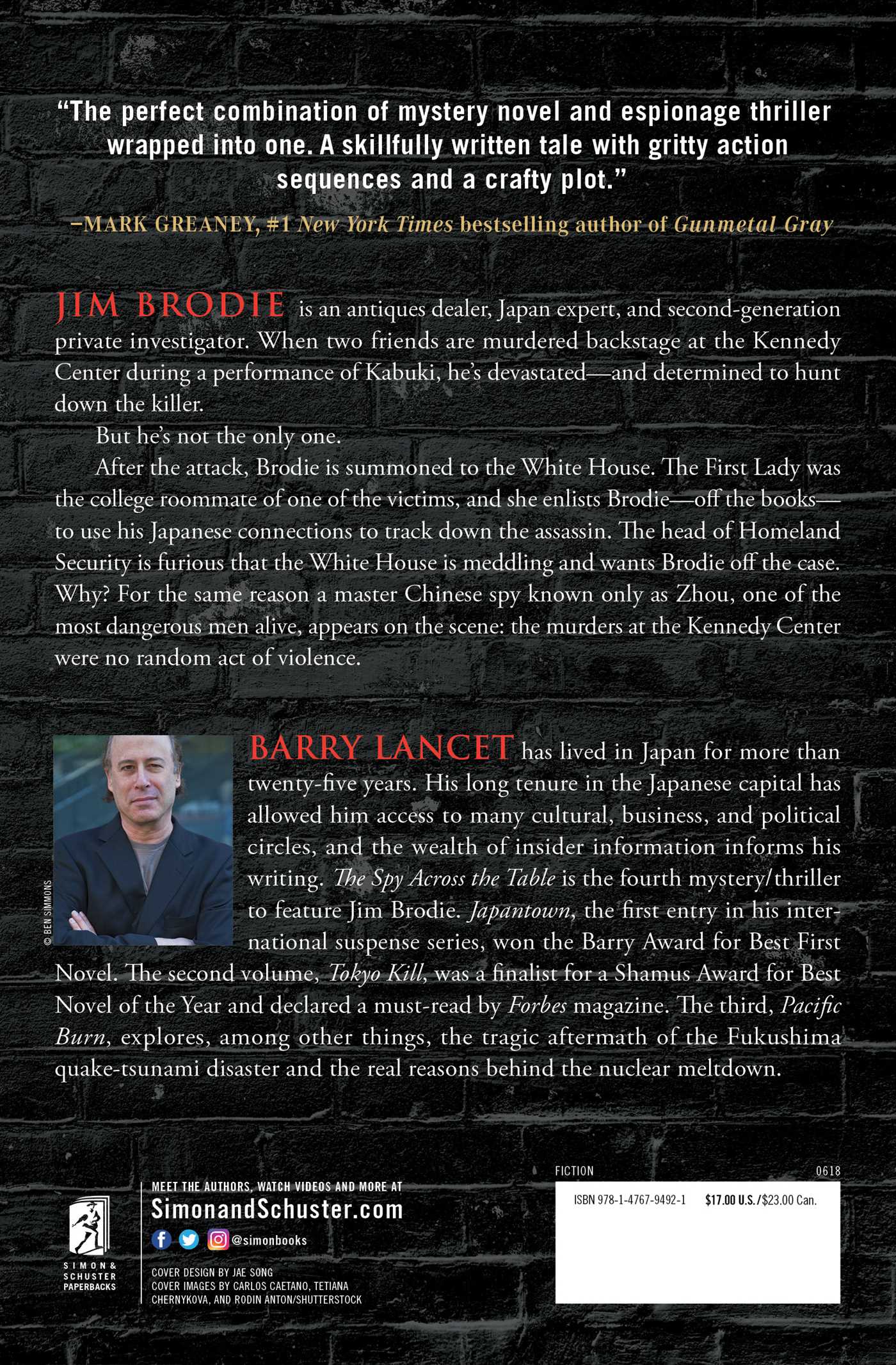 The Spy Across the Table

In this fast-paced fourth thriller featuring Japanese antiquities expert Jim Brodie, a double-murder at the Kennedy Center forces the PI into a dangerous game of espionage—putting him in the crosshairs of the Chinese, North Korean, and American governments.

Jim Brodie is an antiques dealer, Japan expert, and second-generation private investigator. When two of his friends are murdered backstage at a Kennedy Center performance in Washington, DC, he’s devastated—and determined to hunt down the killer. He’s not the only one.

After the attack, Brodie is summoned to the White House. The First Lady was the college roommate of one of the victims, and she enlists Brodie—off the books—to use his Japanese connections to track down the assassin. Homeland Security head Tom Swelley is furious that the White House is meddling and wants Brodie off the case. Why? For the same reason a master Chinese spy known only as Zhou, one of the most dangerous men alive, appears on the scene: Those murders were no random act of violence.

Brodie flies to Tokyo to attend the second of two funerals, when his friend’s daughter Anna is kidnapped during the ceremony. It is then Brodie realizes that the murders were simply bait to draw her out of hiding. Anna, it seems, is the key architect of a top-secret NSA program that gathers the personal secrets of America’s most influential leaders. Secrets so damaging that North Korea and China will stop at nothing to get them.

“As usual in a Barry Lancet novel, the action scenes are first-rate…and the knowledge he imparts about Asian politics and culture is deep. A solid, consistently smart thriller” (Kirkus Reviews), The Spy Across the Table takes us on a wild ride around the world and keeps us on the edge of our seats until the very end.

MIKEY was shot because he begged me for a favor and I complied.

My old college buddy and I stood in the wings of the Kennedy Center’s Opera House theater, watching a Kabuki play unfold in front of a sold-out crowd. VIPs were abundant.

Mikey was starstruck. While everyone in the audience tracked the mesmerizing movements of the Japanese players in their colorful robes, Mikey focused on the bigger picture. Yes, he took in the artistry of the actors, but his expert eye also cataloged the exquisite details of the backdrops, the exotic sweep of the pageantry, and how each played off the other.

“Her costume and makeup are perfect,” Mikey said in a low voice. “Is that really a man under there?”

My friend’s emerald-green eyes sparkled as he soaked up the spectacle. Onstage, snowflakes wafted down. A woman in an elaborately embroidered kimono cooed plaintively for her lover. The expression of emotional turmoil on her face was sublimely complex, half-hopeful even as it plunged toward despair.

Early in seventeenth-century Japan, the shogun famously banned women from the Kabuki stage. The elegantly clad females proved too much of a temptation for aristocratic samurai, who were expected to set an example for the common people by staking out society’s moral high ground. Over time, the long-standing men-only policy evolved into a tradition that persists to this day.

Mikey remained incredulous. “Are you absolutely sure?”

Kabuki troupes wasted no time in seeking men with the prowess to play women. Costumes were upgraded. Makeup was subtly altered. Gestures demure and flirtatious were endlessly practiced and refined, then perfected. The Kabuki experience reached new heights. Even today, Kabuki continued to win converts. Transfixed, Mikey was clearly another. Before him, an actor in snow-white makeup, coiffed wig, and ruby lips uttered a soft lament.

“Brilliant,” he whispered. “The mood of the lighting and even the set itself echoes her sentiment.”

Michael C. Dillman was a production designer. He created sets for movies. Tonight he was a kid in a candy store. We’d run into each other at San Francisco State, where we shared the same artistic sensibilities. Mikey funneled his into set design. I channeled mine into a store selling Japanese art and antiquities out on Lombard, west of Van Ness Avenue.

“How is it you two never met?” I asked, a reference not to the “temptress” onstage but to Sayuri “Sharon” Tanaka.

I smiled at his transparent evasion.

Mikey was shier than shy, even with two Oscar nominations and one win under his belt. Sharon Tanaka was a famed Japanese designer for stage and screen and had been hired to create special backdrops for the Kennedy Center production.

“Did I thank you for getting me in to see her, Brodie?”

Mikey was a longtime admirer of Sharon Tanaka’s work.

“Yes. More times than I can count.”

Sharon and I were friends and frequented some of the same art circles in Tokyo. When Mikey had heard she would be traveling to Washington with the Kabuki troupe, he asked me to arrange a meeting.

From under a disheveled bush of auburn hair, his eyes glowed with a gratefulness I found embarrassing. I glanced away, recalling the first time I’d seen the look. We were college roommates for a while, sharing a near-campus apartment. I got a dose of the look when I gave him the larger bedroom, because even back then he was hauling around cumbersome stage paraphernalia.

“Stop saying that. Maybe one day you two can collaborate.”

Mikey grew wistful at the thought. “That would be nice. Wish me luck.”

“You don’t need any. Just enjoy the get-together.”

Turned out I was wrong.

He needed luck in the worst way—and didn’t get it. 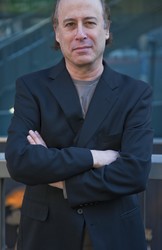 Barry Lancet is a Barry Award­–winning author and finalist for the Shamus Award. He has lived in Japan for more than twenty-five years. His former position as an editor at one of the nation’s largest publishers gave him access to the inner circles in traditional and business fields most outsiders are never granted, and an insider’s view that informs his writing. He is the author of the Jim Brodie series: The Spy Across the Table; Pacific Burn; Tokyo Kill; and Japantown, which received four citations for Best First Novel and has been optioned by J.J. Abrams’s Bad Robot Productions, in association with Warner Brothers. Visit Lancet at BarryLancet.com or on Twitter @BarryLancet.

"Barry Lancet’s The Spy Across the Table is the perfect combination of mystery novel and espionage thriller wrapped into one. A skillfully written tale with gritty action sequences and a crafty plot that has hero Jim Brodie racing to unravel a conspiracy with geopolitical consequences from Washington to the Pacific Rim, Lancet’s latest offering is sure to thrill readers from the first page to the last."—Mark Greaney, #1 New York Times bestselling author of Gunmetal Gray

“As usual in a Lancet novel, the action scenes are first-rate—and violent—and the knowledge the author imparts about Asian politics and culture is deep. A solid, consistently smart thriller.”—Kirkus Reviews

“Lancet’s The Spy Across The Table is a masterful novel—a thriller ripe with intrigue, action, and heart."—Reed Farrel Coleman, New York Times bestselling author of What You Break

“Lancet uses his insider’s knowledge of Japanese culture to great advantage, giving the book a natural, realistic flavor. Brodie is, as always, a strong lead, and the book has some very nice twists. A strong entry in a consistently reliable series."—Booklist

“If you like your thrillers fusing espionage with murder mysteries, set in locations vividly described, and moving at a fast, dense clip with more twists and turns than many another author’s entire canon might provide, The Spy Across the Table should be very diverting summer reading."—Bookpleasures

“Along with lots of good old-fashioned mayhem, Lancet does a fine job on the complexities of electronic espionage — hacking, eavesdropping, GPS tracking, eye-in-the-sky surveillance, biometrics and the like. Readers who can’t keep up with the tech lingo and almost nonstop action might find the whole thing a bit overwhelming. But those who thrive on complex, tightly written thrillers are more likely to call it a tour-de-force.”—The Japan Times

“The hottest read of the summer season, if not the whole year…. The threats, suspense, double crosses and heart-stopping thrills never end in this chilling and realistic masterpiece that could be tomorrow’s international news. If you’re a fan of Flynn, Meltzer, or Dan Brown, you’ll be all-in with enthusiasm for Barry Lancet and his good guy PI, Jim Brodie.  He’s tough, unusual, honest and absolutely awesome!”—Mysterious Book Report (John Dwaine McKenna)

“Barry Lancet is one of the few authors who can entertain and teach you something at the same time, hooking readers deeper and deeper as the story unfolds. That, combined with the fact that Brodie confronts threats that are relevent in today’s world, makes The Spy Across the Table a whole lot of fun to read!”—The Real Book Spy (Ryan Steck)

“Once again, Barry Lancet delivers a superb story that is worthy of praise. The plot is unpredictable and keeps the reader in suspense until the very last page…. An extremely captivating spy thriller.”—Seattle Book Review

“Novelist Barry Lancet’s Jim Brodie is back with a fourth installment in the thriller series with The Spy Across the Table. The latest book about Brodie, an American art dealer/security firm head/martial arts expert who was raised in Japan, lived up to my high expectations.”—Honolulu Star-Advertiser

“The action, as always when it comes to this fantastic character, never stops. Readers who have been waiting for the next Jim Brodie thriller to appear will not be disappointed.”  —Suspense Magazine

“As always, Lancet is skillful with realistic characterization and vivid action scenes… Each book in this phenomenal series is interesting, thought-provoking and educational, which, I believe, makes them some of the best thrillers in the genre.”—Fresh Fiction

“The taut thriller is full of surprises, and keeps the double- and triple-crosses going almost until the very last page. At the same time, it provides plenty of local color and intriguing cultural and historical details without falling into the trap of exoticizing its foreign locations and characters.”—Tokyo Weekender

“If you haven't read any of Lancet's other Brodie novels, you may find yourself wanting to by the time you're done with this one.”—Japan Today

The Spy Across the Table

More books in this series: A Jim Brodie Thriller