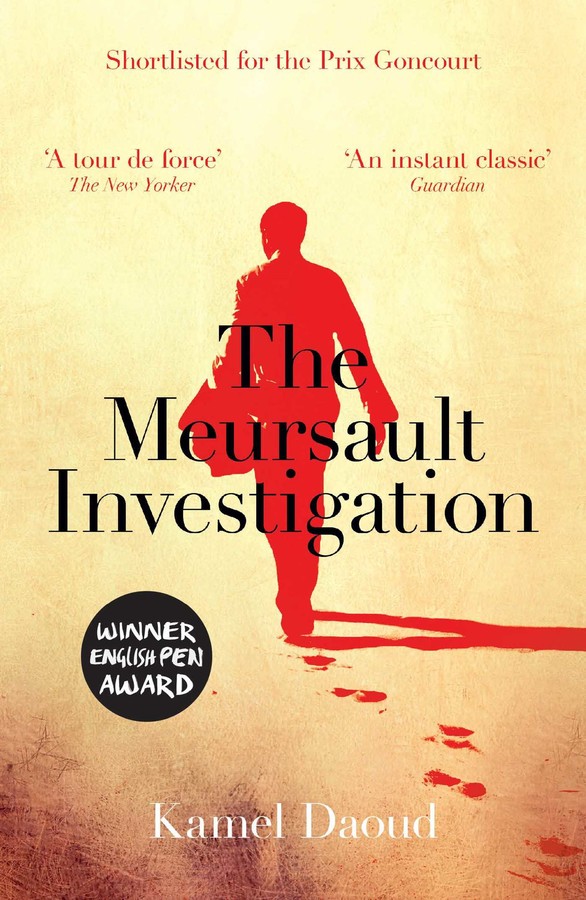 By Oneworld_Unknown
LIST PRICE: AU$ 11.99
PRICE MAY VARY BY RETAILER

Shortlisted for the Prix Goncourt

Winner of the Prix François Mauriac

THE NOVEL THAT HAS TAKEN THE INTERNATIONAL LITERARY WORLD BY STORM

He was the brother of ‘the Arab’ killed by the infamous Meursault, the antihero of Camus’s classic novel. Angry at the world and his own unending solitude, he resolves to bring his brother out of obscurity by giving him a name – Musa – and a voice, and by describing the events that led to his senseless murder on a dazzling Algerian beach. A worthy complement to its great predecessor, The Meursault Investigation is not only a profound meditation on Arab identity and the disastrous effects of colonialism in Algeria, but also a stunning work of literature in its own right, told in a unique and affecting voice.

'A splendid achievement...Daoud has an angry and loquacious register...both beguiling and arresting. It's reminiscent of Italo Calvino: magical, labyrinthian, rhetorical and playfully dark'.

'Daoud has created his own memorable fiction in which he brilliantly exposes the rise of Islamism in Algeria and his nation's failures post-independence.'

'[A] wonderfully entangled novel. Establishing a conversation across time, Daoud not only uses Camus's words to expose the hypocrisy and inherent violence of the French 'civilising mission', but also deploys them in order to convey the cultural, political and social suffocation that is the lot of so many contemporary Algerians. This is a crucial novel for our times'

'Daoud's work stands on its own as it tackles grief, growing up, post-independence Algeria and conservative Islam today...a clever and suspenseful work that is a masterpiece in its own right'.

'A tour-de-force... Daoud has performed a great service for his country: he has taken a western classic and used it to illuminate the Algerian mind'.

'Wholly astonishing...There are no illusions to be found in this wonderfully embittered, beautiful book.'

'An indispensable companion to Camus...superlative writing, beautifully translated...brilliantly metaphorical. For its incandescence, its precision of phrase and description, and its cross-cultural significance, The Meursault Investigation is an instant classic.'

'A dazzling appropriation of L'Etranger'

'An accomplished work of fiction, the anger of Daoud’s hero convinces'

‘There is far more to his book than a clever deconstruction of a canonical novel… suspenseful…its narrative vitality never flags…beautifully taut…Despite the gravity of its concerns, Daoud’s writing maintains a wryness that makes its moments of sharp insight even more arresting. It is a testament to Daoud’s subtle, profound talent that his story works both as a novelistic response to Camus and as a highly original story in its own right. The Meursault Investigation is perhaps the most important novel to emerge out of the Middle East in recent memory’

'An impressive, provocative undertaking...that might not prove easy to put down...the polemic is balanced by artistic ingenuity...A relentlessly adroit blend of fire and clinical precision ensures that Kamel Daoud's iconoclastic deliberation is about far more than a renowned novel by Albert Camus'

‘Clever… Daoud is in equal measure a thoughtful and provocative writer’

'[Kamel Daoud’s] book, The Meursault Investigation, is a retelling of Albert Camus’s classic The Stranger, from an Algerian perspective. Within its 160 pages, Mr. gives voice to the brother of the nameless Arab murder victim who is shot five times on a beach in Algiers by the antihero, Meursault.'

‘a scorching debut novel that is sure to become an essential companion to Camus’s masterpiece.’

‘Daoud’s novel has the magnetism of its forebear, but its themes of voicelessness and vengeance feel utterly present day’

‘[A] mesmerizing first novel … The Meursault Investigation has an inescapable topical resonance, given the role played by political Islam in Algeria in recent times … an absorbing, independent story and a shrewd critique of a country trapped in history’s time warp.’

‘Humour erupts in The Meusrsault Investigation every time there is tragedy, and this recipe for the Algerian absurd gives Daoud’s book its literary sting.'

‘Give Kamel Daoud credit for audacity. In his debut novel, The Meursault Investigation, the Algerian journalist goes head-to-head with a pillar of 20th century literature…The true measure of the novel…is that Daoud realizes critique is not enough…the power – and, yes, the beauty – of The Meursault Investigation is that it moves … to an unexpected integration in which we recognize that for all the intractable divides of faith or nationality, our humanity remains (how can it not?) essentially the same.’

‘Mr. Daoud’s writing is like a live wire flowing with anger. It sparks fresh insights, raises important questions about the links between literature and politics, and challenges us to view the literary past and political present in new ways.’

‘Camus’s The Outsider is vividly reimagined in Daoud’s intensely atmospheric novel … readers will be captivated.’

‘In the hands of Algerian journalist Kamel Daoud, The Outsider has become the springboard for another novel that serves as both homage and rebuke to Camus’ masterpiece … It is a brilliant, infinitely rich tour de force of the imagination that never mentions Camus by name but gives Meursault’s victim not only a name – Musa – but a history, a family and a would-be future … Its originality of vision carries the book a long way toward mastery of its form … The Meursault Investigation stirs our imagination, showing that literary classics are never finished.’

‘A breathtaking and effectively realized novel. The Outsider becomes a palindrome ... The Meursault investigation approaches the incredible, in that it reverses the perspective and point of view not without an emphatic ferociousness, all while playing with the prose and perspective of The Outsider.’

‘A remarkable homage to its model.’

‘Fiction with a strong moral edge, offering a Rashomon-like response to a classic novel.’

‘A superb novel … In the future, The Outsider and The Meursault Investigation will be read side by side.’

‘An intense and surprising story.’

By Oneworld_Unknown
LIST PRICE: AU$ 11.99
PRICE MAY VARY BY RETAILER

More books from this author: Oneworld_Unknown