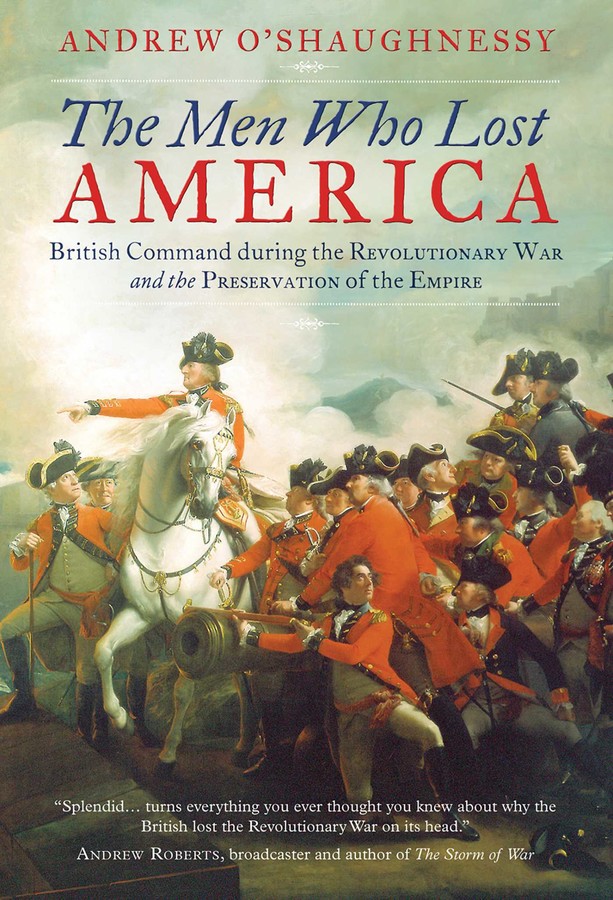 The Men Who Lost America

The first book to redress the myth of British incompetence during the American Revolution, revealing a unique account of the Empire’s most stunning loss

In 1781 the British Empire suffered its most devastating defeat in a war that most believed Britain ought to have won. Common wisdom has held that incompetent military commanders and political leaders in London must have been to blame, their arrogant confidence and outdated tactics proving no match for the innovative and determined Americans. But this is far from the truth. Weaving together the personal stories of ten prominent men who directed the British dimension of the war, Andrew O’Shaughnessy dispels the myths, emerging with a very different and much richer account of the conflict – one driven by able and at times even brilliant leadership.

In interlinked biographical chapters, O’Shaughnessy follows the course of the war from the perspectives of King George III, Prime Minister Lord North, military leaders including General Burgoyne, the Earl of Sandwich, and others whose stories shed new light upon our understanding of how the war unfolded. Victories were frequent, and in fact the British conquered every American city at some stage of the Revolutionary War, retaining key strongholds even during the peace negotiations. Taking a wider lens to events, O’Shaughnessy looks past the surrender at Yorktown to British victories against the French and Spanish, demonstrating that, ultimately, many of the men who lost America would go on to save the empire.

Andrew O'Shaughnessy is the Saunders Director of the Robert H. Smith International Center for Jefferson Studies at Monticello and Professor of History at the University of Virginia. He is the author of An Empire Divided: The American Revolution and the British Caribbean. He started his career in the University of Oxford before moving to America and is now a dual citizen of Britain and the United States. He lives in Charlottesville, Virginia.

"A perfect demonstration of how modern scholarship and original thought can change the way that we think about the past. It is a brilliant book."

"A first-rate study, scholarly, yet accessible."

'Further enriches our appreciation of the American Revolution… O’Shaughnessy’s biographical sketches are captivating and will be read with enjoyment by academics and general readers alike.'

'[The] work of an historian in thorough command of his sources who writes with admirable grace and acuity.'

'Engaging...keeps the whole picture firmly in view: Britain, North America, the Caribbean, the balance-of-power politics on the Continent-all affected by the colonial rebellion.'

‘O’Shaughnessy artfully weaves the entire breadth and sweep of the wars of the American Revolution [and] destroys certain deeply entrenched myths.’

"At last, Andrew O'Shaughnessy has done justice to [the British leaders'] abilities and efforts, while not neglecting their weaknesses and mistakes. We cannot appreciate the huge effort Britain made to win the war nor the immense sacrifices made by the American colonists if we do nothing but denigrate the abilities of these men who tried so hard to keep America within the British Empire."

"The British politicians and commanders who led the American War are often painted as blimps, bunglers or barbarians. Andrew O'Shaughnessy's richly detailed, deeply researched book brings them back to life as eminently capable men fighting an ultimately unwinnable conflict. His sympathetic pen-portraits not only give these great Britons their due--they make the colonists' achievement in defeating them all the more impressive."

"A remarkable book about an important but curiously underappreciated subject: the British side of the American Revolution. With meticulous scholarship and an eloquent writing style, O'Shaughnessy gives us a fresh and compelling view of a critical aspect of the struggle that changed the world. This is a great book."

"A highly-effective account of the role of leadership at a key moment in world history."

“Cuts through the thick crust of romantic myths to cast the American Revolution in a refreshing new light. Blessed with an impartial, open mind, O'Shaughnessy reveals the talents as well as the human foibles of a rich cast of intriguing characters including America's last king.”

– Alan Taylor - Bancroft and Pulitzer Prize winner, and author of The Civil War of 1812

"Scrupulously researched and superbly written, these humanizing portraits of conventional cardboard figures... Offer, like all great history, lessons for today."

The Men Who Lost America