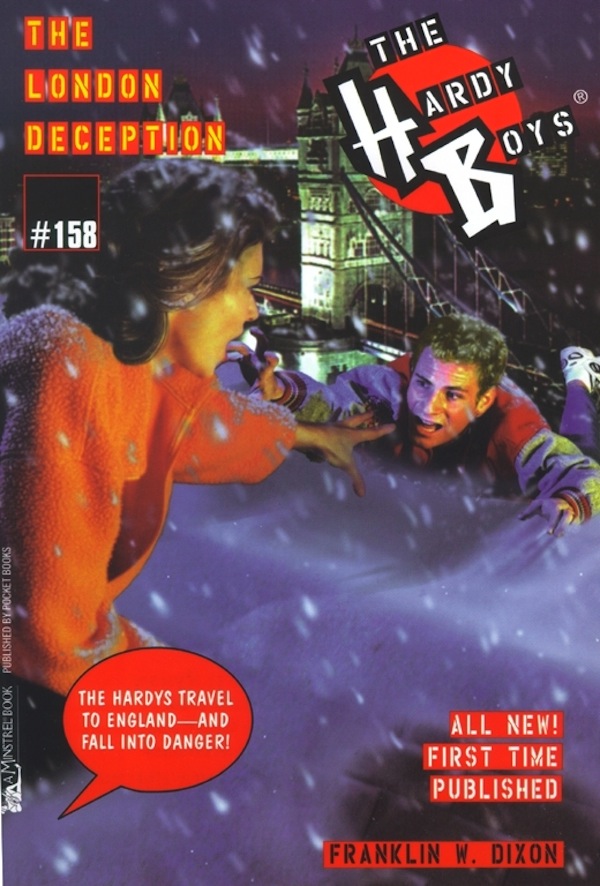 Stage fright takes on a whole new meaning when the Hardys go behind the scenes.

While on a student exchange program in England, Frank and Joe help out with the dress rehearsal for a new murder-mystery play. But suddenly Joe is nearly cooked by exploding stage lights! An accident? Maybe. But when “accidents” start happening all over the production, a real mystery is in the air.

Rumors are flying about the spirit of an actress who died in the theater one hundred years ago. Could the culprit be a vengeful ghost? Or is this the work of something—or someone—a little too close to this world for comfort?

Frank watched how gracefully Emily Anderson glided across the stage toward Chris.
"I tell you that my client is an innocent victim," she stated firmly, placing a hand on Chris's shoulder.
Frank looked up from the action onstage to the lighting grid, shaking his head at Jennifer's daring.

"A little farther, Joe," Jennifer said, stretching out as far as she could and tapping on the side of the light.
Joe was pressed against the railing of the catwalk, gripping Jennifer by the ankles as she leaned on a lighting instrument. Suddenly the light directly across from her came on, shining an intense beam directly into her eyes.
"Hey! Who's in the booth?" Jennifer shouted, as two more lights came on full power.
"Hold a moment!" Mr. Paul called to his actors, and they all raised an arm to shield their eyes as they gazed up and out at the ceiling.
Frank turned and detected some movement out of the corner of his eye. In the light booth behind him, he thought he saw a figure in white moving behind the tinted glass.
Frank rose from his seat, ran up the steps, and flung open the door to the lighting booth. It was empty.
"No one's in the booth, Jennifer," Frank called.
"Bring down nine, fourteen, and seventeen!" she shouted to Frank.
Joe noticed two of the lights that had come on had begun to emit smoke. As he started to warn Jennifer, he saw that the third light, positioned directly over her head, was also smoking. "Jennifer, you've got to get back on the catwalk!"
One after the other, the huge bulbs inside the three lights exploded! Jennifer and Joe recoiled as glass and sparks shot out of a light above her head, showering down into the theater below.
Jennifer's left ankle slipped from Joe's hand. Still grasping her right ankle, Joe tried to brace himself against something and inadvertently placed his hand on one of the burning hot lights.
Joe instinctively drew his hand back. Jennifer's weight now pulled him through the gap between the two railings and off the catwalk. Hooking his knees around the lower rail, he scissored his legs and broke their fall.
Jennifer screamed as she was left dangling in midair, with Joe holding her by one ankle. Joe was clinging to the catwalk only by his legs. The weight of both their bodies was too much for Joe, and his legs began to slip!
Copyright &copy;1999 by Simon & Schuster Inc.
Franklin W. Dixon