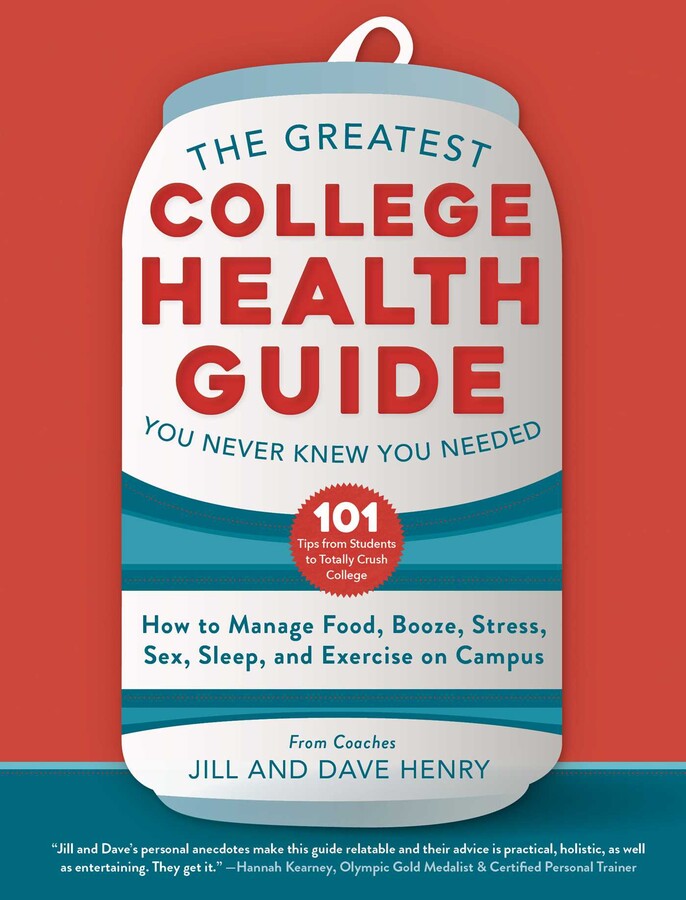 The Greatest College Health Guide You Never Knew You Needed

How to Manage Food, Booze, Stress, Sex, Sleep, and Exercise on Campus

The coach's guide to beating the Freshman Fifteen, Sophomore Slump, crippling anxiety, and your worst hangover! Learn to take care of yourself, and de-stress throughout your undergrad years and beyond.

Every fall, millions of young adults crash into college fired up for the best four years of their lives, ready to experience campus life, take classes about things they’re interested in, and meet people from all over the world. Most students, however, are better prepared to pick their major or talk to strangers than they are to take care of themselves in the college setting. College students today are more depressed, anxious, and stressed than previous waves of students; they’re also more sedentary, not really exercising, and living in a meal-plan limbo supplemented with ramen and coffee.

In this comprehensive field guild, high school coaches Jill and Dave Henry break down the facts and deliver doable, no-BS strategies for managing physical and mental health on campus. In addition to helpful, interactive graphics, the coaches share their relatable true stories—ranging from the ridiculous to the serious—to discuss the five biggest health obstacles students face in college. On top of research-backed tips, The Greatest College Health Guide You Never Knew You Needed also features raw and personal advice from current students on college campuses across the country.

While simply figuring out what to eat and how to exercise can be completely overwhelming, this guide goes beyond a basic crash course on how to be healthy. Jill and Dave cover everything from crucial time-management skills to the complex sensitivity of self-doubt, sexual assault, and depression with humor, humility, and heart. The Greatest College Health Guide You Never Knew You Needed is a complete road map for how to take care of your mind and body that will not only set students up to crush the next four years, but will also provide a foundation they can carry with them for the rest of their lives.

I used to moonlight as the mascot now and again back in high school. Nothing builds character quite like a few hot hours in a giant pirate-head coated with decades worth of sweat. When I got to college, I wanted to utilize the invaluable entertainment skills I’d developed during my time as a gigantic human puppet. There seemed to be only one choice—I became a tour guide.

My tours were filled with bad jokes and awkward pauses. The only comment that consistently earned something other than pity laughter always happened in front of the dining hall, where I would talk about how fat I'd gotten since coming to college. While standing on a bench outside the entryway, I'd slap my belly for effect. "There's an all-you-can-eat buffet set up inside," I said, like a carnival worker trying to lure unsuspecting guests into the House of Horrors. "The food here is so good that I gained the Freshman 20!" Then I'd go on about how I had used all of my savings to buy new pants because I'd split the seams in the old ones. Apparently, the weight gain happened to everyone, so I wasn't embarrassed. And hey, at least I wasn't wearing a giant pirate head.

“When I went in for my annual physical, I realized the Freshman 15 was real. Or the Freshman 22, in my case. I should have expected it, as I had been getting a tad bigger in the muffin top area.” —Saint Mary’s College of California, Senior

Google "Freshman 15," and you'll get nearly 80 million results. Many articles give seemingly simple yet unrealistic advice on how to avoid it: always walk to class, take the stairs instead of the elevator, don't eat a whole stick of butter. Blah, blah, blah. Others state it’s entirely a myth—arguing that college weight gain is very minimal and actually the result of the physical transformation from a teen to an adult body. A second puberty of sorts? Who knew! There is some truth to that claim because it is entirely normal and healthy to gain around five pounds during college as your body continues to change. For many, however, it's more than that. We spoke to a lot of students, and no one tried to blame their bodily changes on blossoming into an adult. Whether their weight gain was two pounds or fifteen, students were more than capable of zeroing in on how they were sabotaging their health. Some cited a total lack of exercise, others hard boozing, but an overwhelming majority declared that their rapidly expanding figure was a direct result of eating like a pig on Christmas. All of the food. All of the time. All of it!

In this chapter, we're going to give you an efficient, straightforward food rundown that will be less preachy than a typical health book and less dense and technical than a nutrition class. Dave and I still eat like shit sometimes, and we're going to argue that you should too. There are, however, some things that you should keep in mind when you're shoving things in your mouth, particularly given the excessive nature of the college environment. A categorization of foods based on their quality will be combined with some pointers on how to chow down, given the unfathomable amount of options you'll be exposed to. We’ll also discuss strategies for experiencing all of the food in a way that won’t make you feel like shit all of the time. Feasting at a buffet requires an awareness of portion control, so if you’re hoping to hold onto your sweet pre-college physique, stick around for that. And finally, we’ll talk about cooking for yourself and the complications that can arise when food freedom becomes a reality.
Jill Henry
Dave Henry

The Greatest College Health Guide You Never Knew You Needed

How to Manage Food, Booze, Stress, Sex, Sleep, and Exercise on Campus