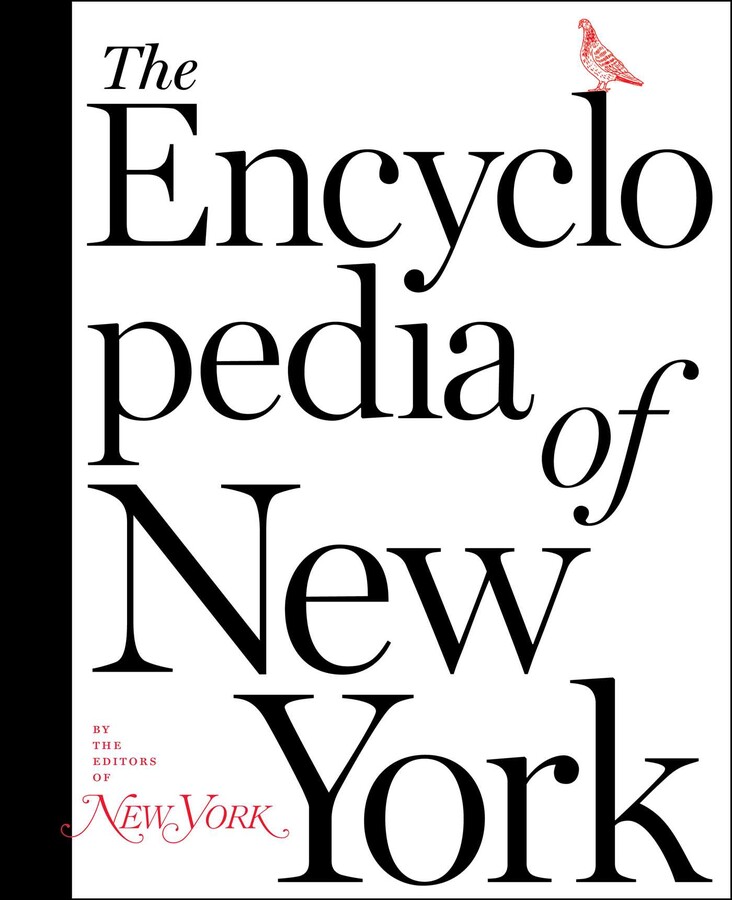 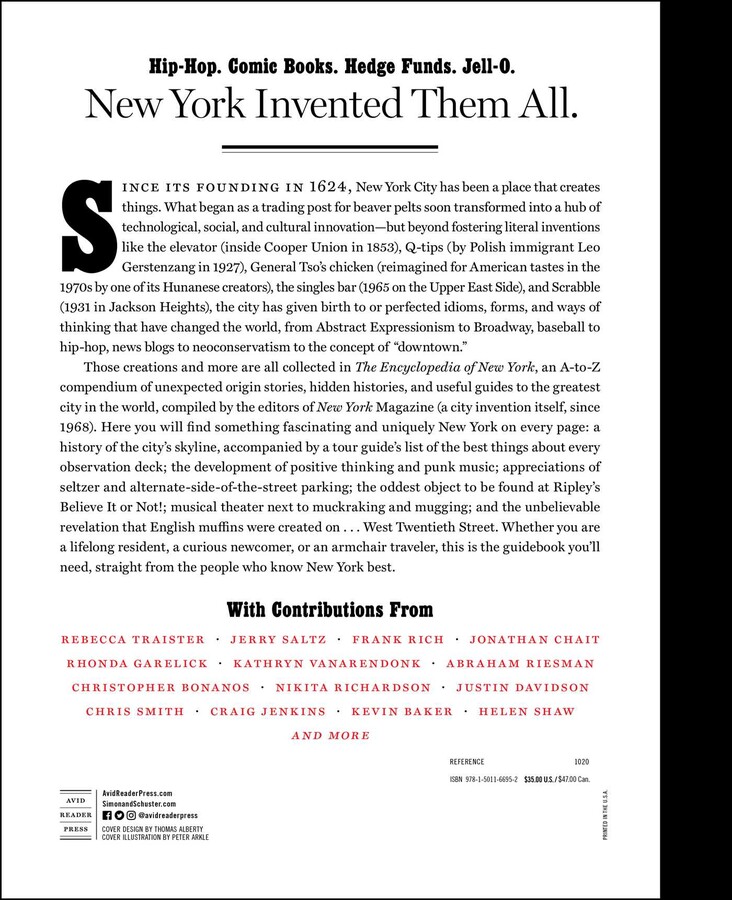 The Encyclopedia of New York

The must-have guide to pop culture, history, and world-changing ideas that started in New York City, from the magazine at the center of it all.

Since its founding in 1624, New York City has been a place that creates things. What began as a trading post for beaver pelts soon transformed into a hub of technological, social, and cultural innovation—but beyond fostering literal inventions like the elevator (inside Cooper Union in 1853), Q-tips (by Polish immigrant Leo Gerstenzang in 1923), General Tso’s chicken (reimagined for American tastes in the 1970s by one of its Hunanese creators), the singles bar (1965 on the Upper East Side), and Scrabble (1931 in Jackson Heights), the city has given birth to or perfected idioms, forms, and ways of thinking that have changed the world, from Abstract Expressionism to Broadway, baseball to hip-hop, news blogs to neoconservatism to the concept of “downtown.”

Those creations and more are all collected in The Encyclopedia of New York, an A-to-Z compendium of unexpected origin stories, hidden histories, and useful guides to the greatest city in the world, compiled by the editors of New York Magazine (a city invention itself, since 1968) and featuring contributions from Rebecca Traister, Jerry Saltz, Frank Rich, Jonathan Chait, Rhonda Garelick, Kathryn VanArendonk, Christopher Bonanos, and more. Here you will find something fascinating and uniquely New York on every page: a history of the city’s skyline, accompanied by a tour guide’s list of the best things about every observation deck; the development of positive thinking and punk music; appreciations of seltzer and alternate-side-of-the-street parking; the oddest object to be found at Ripley’s Believe It or Not!; musical theater next to muckracking and mugging; and the unbelievable revelation that English muffins were created on...West Twentieth Street. Whether you are a lifelong resident, a curious newcomer, or an armchair traveler, this is the guidebook you’ll need, straight from the people who know New York best.

The Editors of New York Magazine

Founded by Clay Felker and Milton Glaser in 1968, New York was one of the earliest (and loudest) proponents of the New Journalism, launching the careers of Gloria Steinem, Tom Wolfe, Jimmy Breslin, Nora Ephron, and many others. More recently, New York has won thirty-six National Magazine Awards in the past two decades—more than any other magazine—and six General Excellence awards. The Washington Post has called it “the nation’s best and most imitated city magazine.”

PRAISE FOR THE ENCYCLOPEDIA OF NEW YORK

“Fans of the Big Apple will delight in this well-written, abundant and justly prideful collection… The editors convincingly argue that everything from abstract expressionism and the auteur theory to punk rock, Q-Tips, the teddy bear, toilet paper (and the urinal), and zoning regulations owes its origins to the five boroughs.” —Kirkus Reviews

“With irreverence and spunk, New York magazine has been around for half a century now. This very big book includes an oral history of the publication and a wide look at its greatest moments.” —New York Times Book Review

“A delicious compendium of the magazine’s coverage from the half-century of its existence, this is the kind of book that incites nostalgia even for the moments you didn’t live though (there’s the original Tom Wolfe “Radical Chic” cover!) and reminds us of the things that haven’t changed (an essay by a wife titled “I Need a Wife,” timely now and forever).” —Vogue

“Oversized, overstuffed . . . A great magazine is commemorated with an equally top-flight anthology. . . . The editors reproduce material that speaks not just to passing moments and fashions, but also to constant editorial emphases, such as high-quality artwork and portraiture. . . . History, local and global, unfolds in this fine gathering that represents a half-century and more than 2,300 issues.” —Kirkus Reviews (starred review)

“We tend to fetishize The New Yorker, but New York magazine has always been the publication that saw the city for what it is: big, brazen, and blustery. This oversized, beautifully-designed, 420-page book is barely big enough to contain its subject.” —Design Observer

The Encyclopedia of New York

More books from this author: The Editors of New York Magazine