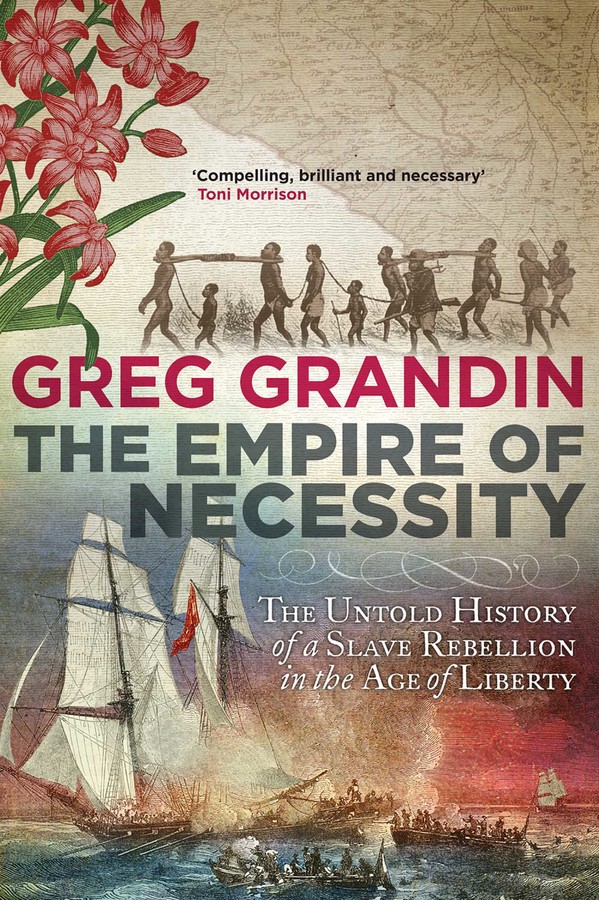 The Empire of Necessity

SHORTLISTED FOR THE SAMUEL JOHNSON PRIZE FOR NON-FICTION 2014

Discover the story of a real-life Captain Ahab of the slave trade, in a landmark book by one of today’s most original and highly acclaimed historians

One morning in 1805, off a remote island in the South Pacific, seal hunter and abolitionist Captain Amasa Delano climbed aboard the Tryal, a distressed Spanish slaver. He spent all day on the ship, sharing food and water, yet failed to see that the slaves, having slaughtered most of the crew, were now their own masters. Later, when Delano realized the deception, he chased the ship down, responding with barbaric violence.

Drawing on never-before-consulted records on four continents, Greg Grandin follows this group of courageous slaves and their persecutor from the horrors of the Middle Passage to their explosive confrontation. The Empire of Necessity is a gripping account of obsessive mania, imperial exploitation, and lost ideals, capturing the epic clash of peoples, economies, and faiths that was shaping the so-called New World and the Age of Revolution.

Greg Grandin is author of Fordlandia, a finalist for the Pulitzer Prize. A Professor of History at New York University, he has written for the New Statesman, New York Times, and others, and has been a Guggenheim Fellow. He lives in New York.

'In a superbly argued and richly detailed account of the interdependencies of slavery and revolution throughout the Americas, as well as the religious traditions of Protestantism, Catholicism and Islam (many of the west Africans were educated Muslims), Grandin brings to vivid life the realities of the period.... The butchery of fur- and oil-bearing mammals on land and sea supplied the money to buy the slaves working the mines and fields of the New World, just as genocide of indigenous people supplied the land and precious metals. One person's freedom was all but impossible without another's servitude.'

‘a book that managed to be at once a compelling narrative of an 1804 slave revolt, a panoramic study of the Americas in an age of revolution and a meditation on the contradictions inherent in the idea of liberty itself, then and now’

‘Superb… An exemplary work of history – even-handed, meticulous, and adroit in balancing action and ideas’

'The Empire of Necessity is scholarship at its best. Greg Grandin’s deft penetration into the marrow of the slave industry is compelling, brilliant, and necessary.'

'For nearly four centuries, as Greg Grandin writes in his powerful new book, slavery was the “flywheel” that drove the global development of everything from trade and insurance to technology, religion and medicine... Through a remarkable feat of research he establishes a strong narrative line... Harrrowing.'

'A wonderfully engaging and original combination of action and reflection, vivid detail and deep insight. It is a shocking story of slavery and brutality, but with an ambition that every historian should have – to truly understand a world.'

'Richly informed... [Grandin] describes his unsettling panorama in a restrained manner, avoiding exaggeration and allowing facts -- many of them horrific -- to tell the story. In doing so, he has produced a quietly powerful account.'

'Grandin has written a gripping, lavishly researched account of high seas drama, as well as the trials of the slaves before and after their revolt. Equally fascinating is the thesis Grandin advances: that in 1804 human political liberty and abject bondage were both rising apace – often advanced by the very same people... Compulsively readable.'

'Greg Grandin has done it again. Starting with a single dramatic encounter in the South Pacific he has shown us an entire world: of multiple continents, terrible bondage and the dream of freedom. This is also a story of how one episode changed the lives of a sea captain and a great writer from the other end of the earth. An extraordinary tale, beautifully told.'

'In this multifaceted masterpiece, Greg Grandin excavates the relentlessly fascinating history of a slave revolt to mine the enduring dilemmas of politics and identity in a New World where the Age of Freedom was also the Age of Slavery. This is that rare book in which the drama of the action and the drama of ideas are equally measured, a work of history and of literary reflection that is as urgent as it is timely.'

– Philip Gourevitch, co-author of the The Ballad of Abu Ghraib

'[Grandin] writes with the skills of a fine novelist. With herculean archival research, he traces the backstory of each of the main participants... the owner of the slaves, the Spanish captain, the Yankee captain, and those slaves whose paths to the fateful revolt can be tracked or at least surmised. Then Grandin extends their stories beyond the revolt to the ends of their lives. Each life story leads through the explosive contradictions of the Age of Revolution...Inventive, audacious, passionate.’

'Grandin's pen is exquisite, the descriptions are lively and sensuous. But he is also deeply reflective. The book has import that extends beyond the interest of the story. He is, as scholars often say, making an intervention, challenging how we see the world and its history… Exciting and illuminating.'

'Greg Grandin is one of the best of a new generation of historians who have rediscovered the art of writing for both serious scholars and general readers. This may be his best book yet… a work of astonishing power, eloquence and suspense, a genuine tour de force.'

– Debby Applegate, Pulitzer Prize-winning author of The Most Famous Man in America: The Biography of H

'Engrossing, well researched, and beautifully written… A rigorously sourced work of scholarship with a suspenseful narrative structure that boomerangs back and forth through time. Grandin has deliv­ered a page-turner. You read it as if it were a thriller novel by Scott Turow or Lee Child.'

'Rooted in an event known primarily through the genius of Herman Melville's transcendent Benito Cereno, [Wretched Tryal] is a stunning work of research done all over the rims of two oceans, as well as beautiful, withering storytelling. This is a harrowing story of Muslim Africans trekking across South America, and ultimately a unique window on to the nature of the slave trade, the maritime worlds of the early nineteenth century, the lives lived in-between slavery and freedom all over the Americas, and even the ocean-inspired imagination of Melville. Grandin is a master of grand history with new insights.'

– David W. Blight, author of A Slave No More

‘As well as correcting the factual errors in Melville’s book, Mr Grandin uses Captain Delano’s account of this and other incidents to explore the complexities and ambiguities of the Atlantic slave trade.’

'Grandin tracks backwards… like a sleuth, unearthing the motivations and machinations… It’s a testament to Grandin's power as a writer that [seal hunter] Delano's hardships and failings generate sympathy – even when compared with the stuff the Africans faced… It's impossible to see all that happens as some isolated episode. It's more like the inevitable confrontation of many desperate people. Ocean currents, and the crush of market forces, have brought them all together. I can't say enough good things about The Empire of Necessity. It's one of the best books I've read in a decade.'

'A splendid account…deeply researched and well-written.'

'A great and moving story.'

The Empire of Necessity