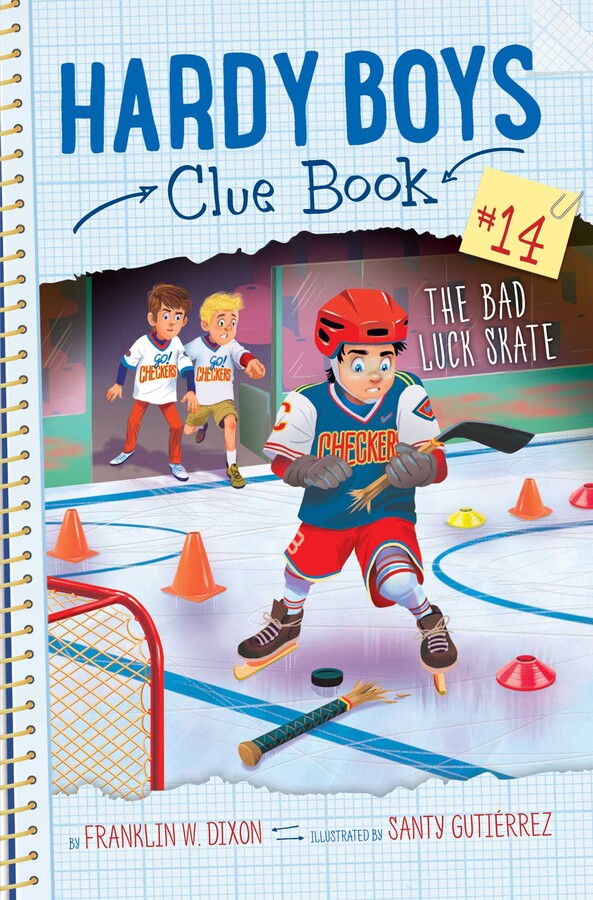 Detective brothers Frank and Joe search for a saboteur in the fourteenth book in the interactive Hardy Boys Clue Book series.

Frank and Joe are excited to be supporting their friends on the Bayport Checkers hockey team. Ever since Frank’s new friend Pete moved to town, the team’s season has turned around. Winning the championship would be the perfect reward for all their hard work.

But when someone dumps paint all over the team’s lucky skate just before the game, their star player worries their luck has run out. Then Pete’s stick breaks before he has to take the ice! Has the team really lost their luck or is someone trying to psych them out so they lose the game? Without a clear suspect, Frank and Joe are on thin ice.

Nine-year-old Frank Hardy gave his friend a fist bump. “I wouldn’t miss it for the world,” he said.

“I thought you said Pete was as big as a giant,” blurted Frank’s eight-year-old brother, Joe. He had tagged along to watch Pete’s team, the Bayport Checkers, play in the division hockey championship against the Southport Snipers. Frank and Joe didn’t play hockey, but they both loved supporting their friends.

The beginning of the Checkers’ season had been rough. They’d lost five of their first six games. The players hadn’t been passing to one another. They couldn’t score goals. No one was having fun. That had all changed in October, when Pete moved to town. With his stellar play and leadership, the team had managed to turn their season around by winning thirteen of their last fifteen.

Not only was Pete a whiz on the ice, but he was the kind of kid everyone liked. He and Frank had become friends at school. Over the past few months, Frank had been to most of Pete’s games, and he was looking forward to watching his friend win a championship.

“Pete’s not just the team captain,” Frank told his brother. “He’s the best player in the league.”

The boys’ dad, Fenton Hardy, ran his own detective agency in Bayport. Frank and Joe liked to think they were carrying on the family business, solving mysteries of their own. They wrote down everything about their cases, including suspects and clues, in their clue book. The brothers carried it everywhere they went. You never knew when a mystery might pop up.

“Out of the way, goon,” a girl called from behind the boys. The girl was Joe’s age. She had white skates slung over her shoulder, her hair done up in a ponytail, and she was dragging a small suitcase.

Pete rolled his eyes. “My sister, Pam,” he told the boys. “She has a figure-skating competition on the other rink.”

“The whole family does,” Pam responded. “Not that anyone ever watches my skating competitions. They’re too busy watching Pete sniff his skates before every hockey game.”

“I do not sniff my skates,” Pete protested.

“That’s a good thing,” Joe said, waving a hand in front of his nose. “The smell is bad enough with the skates still in your bag.”

“You might not be all about the stink,” Pam argued, “but you’re still weird before you play.”

Pete gave his sister a hard look. “I have a game-day routine. It helps get me focused and ready to play.”

“Exactly,” Frank agreed. “All the best athletes have one. Following a steady game-day routine programs your body to perform when you need it to. That way, you can focus on the important thing—getting a win.”

“You can call it a routine,” Pam said. “I call it superstition. Every little thing needs to be exactly the same or he has a hissy fit and makes a big deal about how they won’t win.”

“Not every little thing.” Pete frowned. “There are just a few steps I take that help me play better. The way I tape my stick, for instance. If I use black tape, it hides the puck, making it harder for the goalie to see. And I leave the top hole on my skates unlaced to help me get lower when I skate.”

“That all sounds practical,” Frank said.

“He left out the part about sniffing the stinky skate,” Pam said, smiling a devilish grin.

Pete looked away. “There is one superstition,” he confessed. “But it doesn’t involve smelling anything.”

Everyone stared at Pete, waiting for him to continue. It was obvious he was a little embarrassed. “We always touch our lucky skate before taking the ice. It started as a way to bring the team together. The one time we didn’t do it, we lost 4–0.”

“Eww,” Joe said, waving his hand in front of his nose again. “Touch a smelly skate or lose the game? That’s a tough choice.”

Pete shrugged. “I’ll do anything to help us win.”

They were about to head into the rink when a deep voice interjected, “I hope that includes cleaning up after yourself, young man.”

The kids all turned in the direction of the speaker, a large man dressed in faded blue overalls, who was wagging a finger in Pete’s direction.

“There’s a lot going on in there today,” Wally continued. “I’ll have enough to do without you boys making any more messes.”

Wally waved back. “Big competition for you today, little lady. Win this, and you could get a spot at nationals. I’m sure there’s going to be a big crowd.”

Pam frowned. “The division hockey championship is today. That’s where the crowds will be.”

“Plenty of folks know how amazing you figure skaters are,” Wally reassured her. “I bet your parents can’t wait to watch.”

“They’ve got to stop by Gram’s house today,” Pam grumbled. “They’re gonna try to make it back, but who knows.”

“I know I’ll be there,” Wally responded.

“I’d like to watch you skate too,” added Joe. “Frank will definitely come with me. Just let us know when you go on.”

“Thanks, guys,” Pam said. “I’ll find out what time my competition starts, but I’m sure it will overlap with Pete’s game. Everyone will be over there. That’s what always happens.”

“We’ll make it,” Joe promised, but Pam was already walking away.

Santy Gutierrez resides in the seaside city of La Coruña, Spain. He has won acclaim as the Best Spanish Young Editorial Cartoonist and Best Galician Caricaturist, among others.