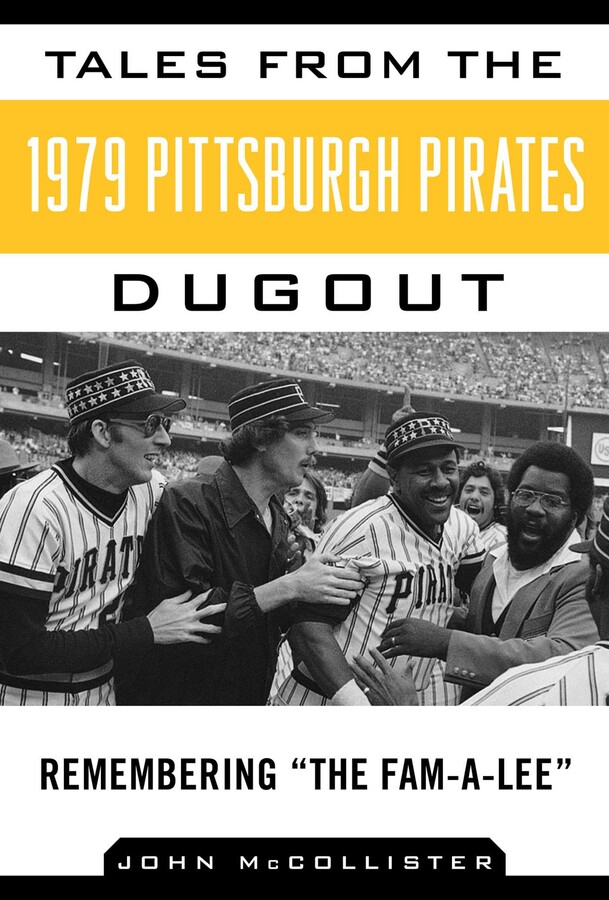 Tales from the 1979 Pittsburgh Pirates Dugout

Part of Tales from the Team
By John McCollister
Published by Sports Publishing
Distributed by Simon & Schuster
LIST PRICE: AU$ 18.99
PRICE MAY VARY BY RETAILER

The year is 1979. America is in a funk. And Pittsburgh was no exception.
Double-digit inflation, a near disaster at nearby Three Mile Island, and the decline of downtown businesses all placed over the city of Pittsburgh a cloud that grew darker than the smoke that rose from the Homestead Works 25 years earlier.
Into this atmosphere of doom and gloom came a cause to celebrate. The 1979 Pirates, under the baton of manager Chuck Tanner, included a cast of characters known as Scrap Iron,” Cobra,” Teke,” The Candy Man,” and, of course, Pops.”
The team became a cardiologist’s nightmare as the Bucs compiled a 98-64 regular season record, winning 25 of those games in their last at-bats.
Down three games to one, the Bucs rose from the ashes to defeat Baltimore and become World Series champions. Thousands of Pittsburgh faithful marched along Smithfield Street and Fifth Avenue. They cheered, danced, and sang over and over again the team’s theme songWe Are Fam-a-Lee.” That upbeat song remains linked with the ’79 Bucs to this day.
Relive those glory days in Tales from the 1979 Pittsburgh Pirates. Celebrate the turnaround of shortstop Tim Foli as a player and as a man. Laugh with Chuck Tanner when he heard Pirate fans, including his own wife, actually boo him for what they thought was a poor decision. You might even shed a tear when you read about the untimely passing of the legendary Willie Stargell.
These and the other tales about the 1979 Pirates will bring back a heap of fond memories about one of baseball’s most colorful teams.

Tales from the 1979 Pittsburgh Pirates Dugout

Part of Tales from the Team
By John McCollister
Published by Sports Publishing
Distributed by Simon & Schuster
LIST PRICE: AU$ 18.99
PRICE MAY VARY BY RETAILER