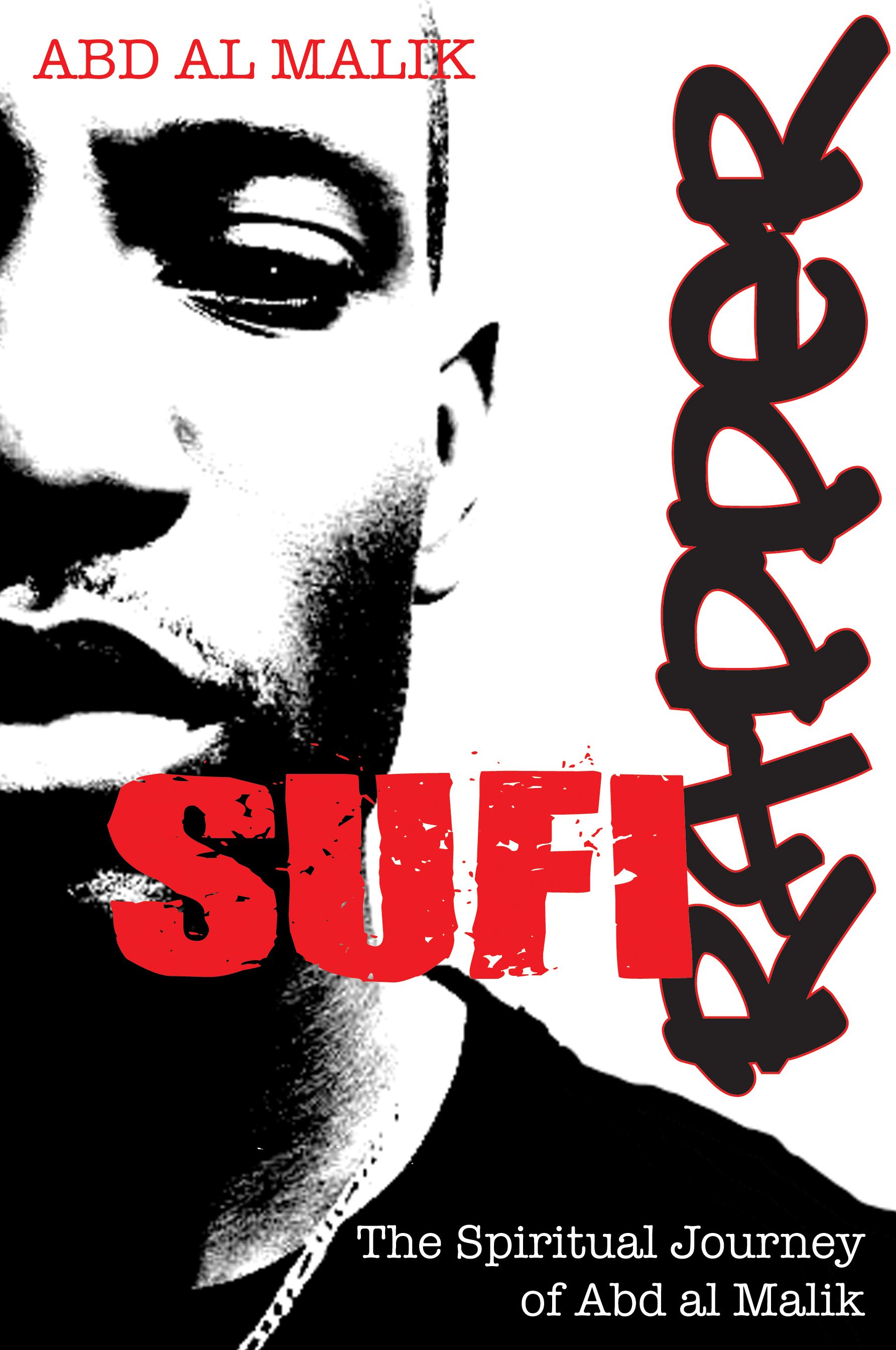 As a poor black resident in one of the notorious French banlieues (the ghettos surrounding French cities), Abd al Malik had every chance of meeting the same fate as many of his peers: drug addiction, prison, and/or an early grave. Despite his early involvement in the endemic crime that was routine in his neighborhood, his keen intelligence won him admission to some of the most prestigious schools in Strasbourg. His dual life as honor student/pickpocket ended when he converted to Islam, where again his intellect and sensitivity prevented him from entering the hate-filled spiral promoted by the fundamentalists. His distaste for the hatred they preached in the madrassas and his love of music led him to Moroccan Sufi master Sidi Hamza al-Qadiri al-Butchichi, whose message of universal love and joy now animates the rap songs of this prize-winning composer and performer.

I had been particularly brilliant this final trimester of eighth grade. It should be noted that the stakes involved were quite high: my success would not only give me access to high school but also to the essential grant that would allow my mother to cover the costs of my continued education. I was planning, once I had put middle school behind me, to enroll in Notre Dame des Mineurs, a private Catholic school that was one of the best secondary schools of Strasbourg.
I had plunged into my studies with renewed enthusiasm. My new playmates were named Seneca, [Albert] Camus, Epicetes, [George] Orwell, [Aimé] Césaire, Thucydidus, [Frantz] Fanon, Saint Augustine, [René] Barjavel, [Aldous] Huxley, and Cheikh Anta Diop. These heroic figures fascinated me; their entire beings were engaged in a struggle that awoke a profound echo in me. They became the tutelary figures of my life, giving it meaning and carrying me toward a new horizon. And as I conversed with them I had the impression of expanding into an entirely new dimension because I suddenly found myself filled with the irrepressible desire to leave my world, to go beyond my own forces.

But it was Malcolm X, the American Black Muslim leader who was a pacifist but who challenged nonviolence, who made the deepest impression on me. At the university library where I had gotten into the habit of studying, I made the acquaintance of Thierry, a large blond with an Alsatian accent who was studying anthropology and whose mind was completely fixed on Africa--something I could not help but find comic. He pulled off the feat of procuring for me a photocopy of the entire Autobiography of Malcolm X as well as several of the final speeches he gave during the year of his death in 1965. I learned that my hero was born in 1925 in Omaha, Nebraska, of a pastor father who was murdered by the Ku Klux Klan and a mother who was psychologically destroyed (and who had to be institutionalized) after this tragic event. Malcolm X lived in Boston then New York, cities in which he was a burglar and a dealer in turn. He spent seven years in prison for these various crimes and became a “Black Muslim,” which is to say a member of the Nation of Islam, a Black separatist movement founded and directed by Elijah Muhammed, who was freely inspired by the Muslim faith. Once released from prison, Malcolm X rapidly imposed himself as the charismatic figure of this movement and gave it a national scope. By centering the activity of the Nation of Islam on the struggle for civil rights, he also made himself the champion of the underprivileged Blacks of the United States. Following several journeys through Europe, Africa, and the Middle East, but especially after his conversion to orthodox Islam, he broke relations once and for all with the Nation of Islam and the racist rhetoric it carried. From Saudi Arabia, where he was then making a pilgrimage to Mecca, he wrote an unforgettable letter to his family and friends, who hastened to distribute it to the media. I read and reread this letter at least a hundred times, my entire being throbbed with exaltation when I discovered it. It represented such a turning point in my directionless adolescence that I want to give a sample of its tone here:

Never have I witnessed such sincere hospitality and the overwhelming spirit of true brotherhood as is practiced by people of all colors and races here in this Ancient Holy Land, the home of Abraham, Muhammad, and all the other prophets of the Holy Scriptures. For the past week, I have been utterly
speechless and spellbound by the graciousness I see displayed all around me by people of all colors.
America needs to understand Islam, because this is the one religion that erases from its society the race problem. [ . . . ] You may be shocked by these words coming from me. But on this pilgrimage, what I have seen and experienced has forced me to re-arrange much of my thought patterns previously held, and to toss aside some of my previous conclusions. [ . . . ]

And he signed his letter with his Muslim name: El Hadj Malik el-Shabazz.

On his return to the United States, he proposed to register a formal complaint at the United Nations against America for its racist, violent, and segregationist policies. He also proposed joining with Martin Luther King and all the leaders of good will, Blacks and Whites, who wished to fight together for equal rights. But on Sunday, February 21, 1965, he was struck down by sixteen bullets from a revolver, during a meeting in Harlem. He was then thirty-nine years old.
I was fascinated by this destiny and steeped myself in the final message of a man who had succeeded in surpassing the stage of resentment to attain one of universal struggle. With these photocopies, I was plunged into a veritable voluntary exile of reading and introspection. I began to assess the weight of my actions. For me, the distinction between good and evil was very fuzzy, it was a question of knowing rather “what did one good” in the egotistical sense of the term, or what did not. This subtle distinction is an important one, the entire mentality of my neighborhood was built around it. But with the specter of drugs, which lurked all around me with the deaths they had claimed, and with the image of that woman knocked down to the ground still pursuing me, the street no longer shone for me as it once did. I was still living on it, of course, but it no longer had the same attraction for me. My heart was no longer in it, and I felt like a prisoner there. My heart had thrilled to the call of Malcolm X--and now needed something different.
Abd al Malik

Born Régis Fayette-Mikano in 1975, Abd al Malik formed the rap group New African Poets in the early 1990s. Following his successful career with them, he released two solo recordings, the most recent of which, Gibraltar, has garnered a number of awards, including the Prix Constantin. He is the recipient of the prestigious Victoire de la Musique award for the best male artist of the year and the Chevalier des Arts et des Lettres award. He also appears on Moby’s 2008 album, Last Night. Abd al Malik lives in France with his wife, the R&B singer Wallen, and their son.

"This book is a little gem, full of colorful characters and uplifting incidents that have the charm of fairy stories, as well as the profundity and resonances of life tales. Most important, it is a spiritual journal of a young man, seeking the infinite to find peace. Recommended for all readers."

“In our Western world where ‘street culture’ has become a religion unto itself, Abd al Malik’s journey from ghetto gangster seduced by fundamentalist Islam to happily married Sufi poet resonates like a vibrant call, shattering our clichés and prejudices. Social divides are but a hallucination. Everything can be reconciled and reconnected. This Sufi rapper may not be a wise man or a saint--just a punk whose soul cracked open, like most of the great masters--but his voice is a wake-up call reminding us that the path starts anywhere and always ends up in the same place: in Love.”

– Marianne Costa, coauthor with Alejandro Jodorowsky of The Way of Tarot

"The life of Abd Al Malik has parallels to that of one of his heroes, Malcolm X. . . . Like Malcolm X, a youthful criminal who despised authority (especially white authority) and whose views were radically and permanently altered when he encountered real Islam and Islamic people in Africa, Malik was transformed by Sufism. . . . compelling autobiography . . . "

". . . in this very readable translation by Jon E. Graham, is a brief but appealing account of the author's spiritual quest. . . . The book concludes with a 33-page Appendix of "Lyric Extracts" in French and English from the author's Sufi inspired album Le Face a Face des Coeurs (Hearts Face to Face)."