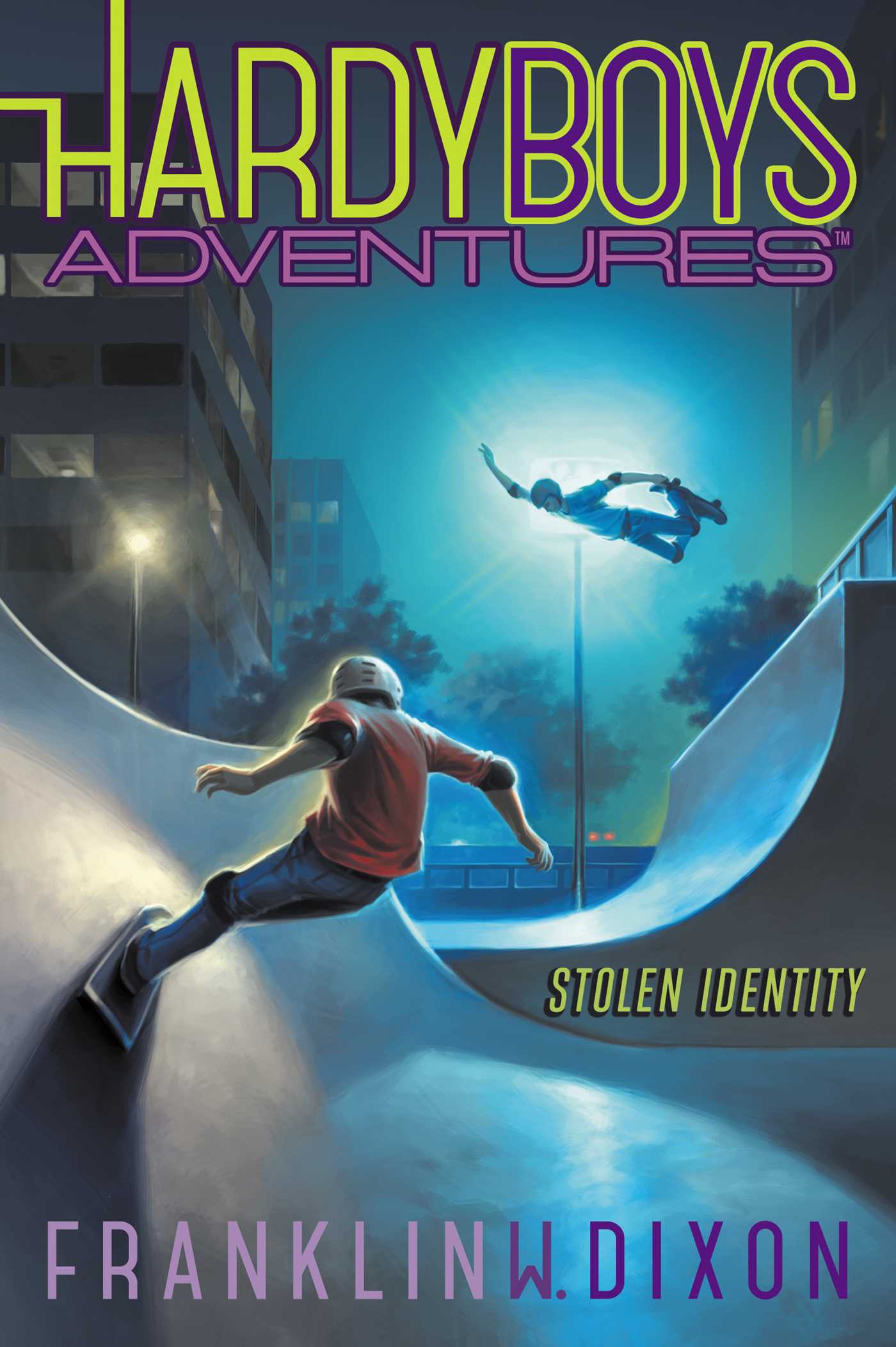 A criminal that seems to be straight out of a Sherlock Holmes novel is out to get brother detectives Frank and Joe in the sixteenth book in the thrilling Hardy Boys Adventures series.

An original Sherlock Holmes manuscript was stolen from the Bayport Museum and now pages keep showing up in Frank and Joe’s things: their lockers, menus, even the backseat of their car. It’s clear someone is out to frame them. But who could it be?

The boys try their usual means of deduction, but everything leads to a dead end. They just keep finding unsuspecting people who were paid to hide the pages by a mysterious third party. Frank recognizes this tactic—it’s exactly what Moriarty would do to throw off Sherlock Holmes. So the brothers decide to use one of Sherlock’s signature ideas: The Baker Street Irregulars. Though instead of street kids, Frank and Joe use a group of skateboarding tweens to keep their eyes and ears open around town.

It’s a battle of wits as the brother detectives try to clear their name. But this Moriarty wannabe always seems to be one step ahead. Can the Hardy boys find the real culprit before it’s too late?

Stolen Identity 1 OFF WITH A WARNING FRANK
YOU GOING TO FINISH THAT?” Joe asked as he snatched the last piece of bacon from my plate.

“Yes,” I replied, resisting the urge to jab my brother’s hand with my fork. “I was.”

“Don’t quarrel, boys,” Aunt Trudy said as she placed another plate of bacon onto the table. “There’s plenty to go around.”

I replaced the stolen strip of bacon and went back to my open chemistry book. Wednesday was always “pop quiz” day in Mr. Watson’s class. Although no one understand why he called it a “pop” quiz when it consistently occurred on the same day every week.

I looked up to see my brother staring out the kitchen window. We watched a police cruiser slow to a stop in front of our house.

The driver’s door opened and a uniformed officer—a tall woman I didn’t recognize—stepped out and strode up our sidewalk toward our front door.

I raised an eyebrow at Joe. “What did you do?”

I was just messing with my brother. We may be known around town for our sleuthing, but we’d never received unannounced police house calls before.

The doorbell rang and Aunt Trudy turned to us. “I’ll go see what this is about. You boys finish your breakfast, it’s almost time to get going.” She tossed her dish towel down and went to open the front door.

Joe and I put our forks down so we could listen in. The police officer’s voice was muffled but Aunt Trudy’s came through loud and clear.

“They’re overseas right now,” we heard Aunt Trudy say. The officer must’ve asked about our parents. “Fenton stayed over after his detectives’ conference, and Laura flew out to meet him. She wasn’t going to let him enjoy Paris all by himself?!”

There was laughter from the officer and then more words I couldn’t quite make out.

“Oh, the boys are in here,” said Aunt Trudy, her voice getting louder. “They haven’t left for school yet.”

Aunt Trudy led the officer into the kitchen. The woman had a folded newspaper under one arm.

“Boys, this is Lieutenant Wolfe,” said Aunt Trudy. “She’s here to talk to you.” Our aunt turned to the lieutenant. “Can I get you some coffee?”

The woman smiled. “No thank you. I won’t be too long.” She took a seat at the table. “I just need to speak to Frank and Joe about a small police matter.”

Aunt Trudy beamed. “Ooh, another case. I’m sure the boys will be as helpful as always.” She grabbed her own coffee mug and headed for the living room. “I’ll leave you to it, then.”

I turned back to the lieutenant, who was no longer smiling.

“Hello, boys,” she greeted us. “I just transferred over a couple of months ago. We haven’t crossed paths yet, but I’ve heard an awful lot about you.”

Joe grinned. “Our reputation precedes us, huh?” he asked. “Hey!”

I had kicked my brother under the table. Something told me this was not just a friendly get to know the neighborhood visit.

“Is there something we can help you with?” I asked politely.

The lieutenant didn’t answer right away. She just stared at me from across the table. I finally broke eye contact and glanced at Joe. He simply shrugged.

“I picked up your newspaper outside,” said the lieutenant. She pulled out the paper out from under her arm and held it up for us to see.

“That’s our dad’s,” said Joe. “He still likes his news old-school.” My brother held up his phone. “Not like us.”

The woman pursed her lips and carefully unfolded the paper to reveal the front page. “How about I read an article for you . . . old-school.”

“You came over here just to read us the newspaper?” I asked.

Lieutenant Wolfe shrugged. “Why not? I’m a public servant, after all.”

I cringed and stole a glance at Joe. His face mirrored mine. This wasn’t going to be good.

After a quick look in our direction, the lieutenant read past the headline. “?‘Terrance Harlow was taken into custody yesterday by state police and is due to be transferred back to Bayport to face criminal indictment. He is charged with masterminding the string of home burglaries that plagued Bayport suburbs last month. Using a landscaping business as a cover, Harlow allegedly broke into houses and stole jewelry while homeowners were at work. However, it wasn’t the hard work of Bayport’s finest that led to his plot being uncovered. Instead Harlow was identified by the sleuthing skills of two Bayport High students—Frank and Joe Hardy.’?”

Joe ran a hand through his blond hair and looked up at the ceiling. He didn’t answer.

“I’m not finished,” Lieutenant Wolfe said through tight lips. She looked back down at the paper. “?‘Our big break in the case came when we realized that most of the burglaries were just a cover,’ said Joe Hardy. ‘Harlow was really after a diamond necklace that had been willed to his niece. He thought it rightfully belonged to him. He thought the theft wouldn’t be traced back to him if it was just one of many.’?”

“I didn’t know she was a reporter,” explained Joe. He half smiled. “At first.”

“Oh, and you didn’t stop there,” said the lieutenant. She read more. “?‘?“We solve cases for the police all the time,” Joe Hardy went on to say. “My brother and I have been doing it since we were little kids. You could even say mystery solving is in our blood. Our father, Fenton Hardy, is a renowned detective.”?’?”

“You were flirting,” I accused my brother. “Flirting and bragging.”

Lieutenant Wolfe cleared her throat and continued reading. “?‘Police Chief Olaf is on extended leave and could not be reached for comment. However, Lieutenant Patricia Wolfe was brought in to lead the department in his absence. One concerned citizen, who didn’t wish to be named, had this to say: “I don’t know who this Wolfe lady is, but I’m glad the Hardy Boys are still around to pick up the slack while Olaf is gone.”?’?”

I cringed and Joe sucked in a breath after hearing the last line.

“Vigilantes?” I asked. “That seems a little strong.”

Lieutenant Wolfe folded the paper. “Not in my book.” She tossed the paper onto the table. “Do you know what kind of grief I’m going to get when the chief finds out about this?”

“Don’t worry about the chief?! He’s used to us helping out. He comes off all scary, but he’s really just a big teddy bear once you get to know him,” Joe said with smile, clearly hoping his explanation would make this all go away.

I shook my head. “Why is the chief on extended leave?”

“His mother is ill and he took time off to care for her,” the lieutenant replied.

“We’re sorry to hear that,” I said. “And look, we didn’t mean for you or the police to look bad in that article.” I shot a brief look to Joe. “We just try to help when we can. We always try to work with the police. Not undermine them. This is really just a misunderstanding.”

The woman leaned forward. “You’re teenagers. The Bayport police department does not need your help. I checked with the other officers, and it seems you two have been given a lot of leeway with your detecting hobby. But I don’t care who your father is. It’s dangerous and I won’t stand for it. You leave the mysteries and crime fighting to the police.” She pointed a long finger at each of us. “In fact, if I see you as much as handing out a missing pet flyer, I’m detaining the both of you for questioning.”

I raised both hands. “The only mystery on my mind right now is how to pass my chemistry quiz.”

The lieutenant got to her feet. “Glad to hear it.” She glanced at her watch. “About time you got to school, isn’t it? You need a ride?”

“Frank has a car,” Joe volunteered.

“Oh, yeah.” The lieutenant smiled as she pulled out her phone. She tapped the screen a few times and proceeded to rattle off the make and model of my car, the date it was purchased, the purchase price, its license plate number, and . . . “A parking violation last fall.”

She put her phone away. “Well, as soon as I get back to the station, every officer is going to have this information with orders to keep a watchful eye on both of you.” She gave a sly smile. “I wouldn’t roll through any stop signs if I were you.”

The lieutenant’s smile disappeared, and she strode out of the kitchen and left our house. Joe and I watched through the window as she climbed into her squad car and drove away.

“She was kind of intense, huh?” asked Joe.

I nodded as I checked my watch. “Oh, man. We’re going to be late.” I closed my textbook and shoved it into my backpack. “Especially since I’ll have to drive five miles under the speed limit, thanks to your big mouth.”

“Not making the police look bad like that,” I pointed out. “And not when Olaf was out of town. He’s established and not trying to prove anything. This is a pretty big deal for a new lieutenant. No wonder she’s mad.” I moved my plate to the sink.

“Well how was I supposed to know Olaf was going to be gone! Anyway, I’m sure it’ll all blow over.”

“Agreed. But we better do what she says for the next couple of weeks. No cases, no mysteries, nothing out of the ordinary.”