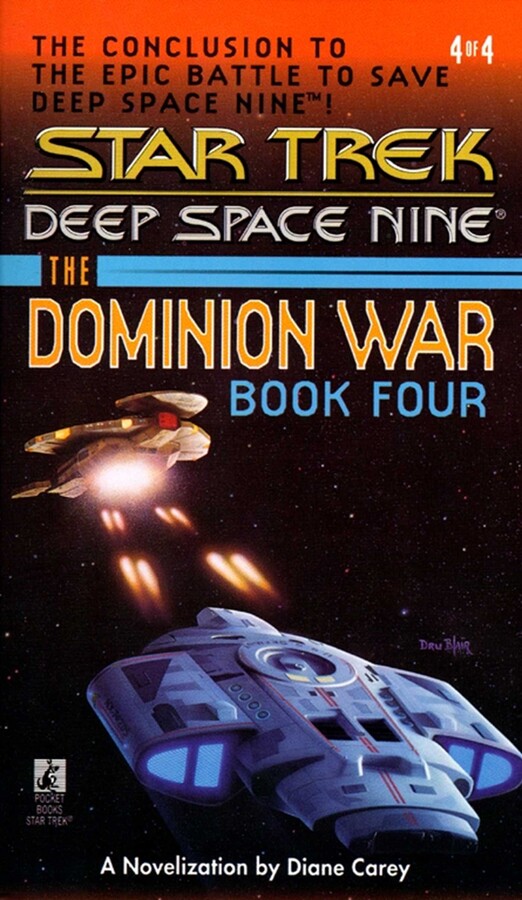 Part of Star Trek: The Next Generation
By Diane Carey
LIST PRICE: AU$ 5.99
PRICE MAY VARY BY RETAILER

"Ben, come in. What've you got on the Argolis problem?"

The admiral's office was a mirror likeness of Sisko's, with the exception of personal items that implied a certain permanence. Sisko had deliberately not put any such things in his office, not wanting to give anybody the idea that maybe he liked it here and wanted to stay.

Despite his inclination to rush in early, he had waited until 0800 before coming to Ross with a battle plan he'd had ready for much longer, but that would've given too much away. And he had to be careful how he worded his plans to Ross.

Admiral Ross already had a star chart of Argolis Cluster raised on a wall monitor. After a polite greeting, Sisko went straight to the monitor -- he didn't mind showing that he was proud of his work.

The star chart was loaded with the positions of the sensor array embedded into its program, which proved to Sisko that Martok had funneled the information through already and he could speak freely -- more or less. There was even a set of faint blinking lights that indicated the fighter group of guard ships planted there by the Jem'Hadar. Destroying the array was one problem -- those ships were another, much bigger, problem.

"All right, Ben, what's your plan?" the admiral asked. "How do we get an assault squadron in close enough to blast an array that can see them coming?"

Though Admiral Harold Ross was not a great tactician, he was in fact known for keen self-appraisal and surrounded himself with advisors smarter than he was, whom he drove relentlessly. He wasn't a very sharp or inspiring fellow, except that he never beat around the bush and was scrupulously forthright.

"We'll have to draw the guard ships away from the cluster, Admiral," Sisko began immediately. "My suggestion is to use General Martok and a small task force of ships, no more than five, to create a diversion big enough to draw off at least half of the picket ships. Then, while the Jem'Hadar think the activity's going on somewhere else, we send in a single ship to exact the assault."

"One ship to take down the whole sensor array? Are you kidding?"

"Not at all. The array can be neutralized with one powerful and cleverly arranged assault -- "

"Gosh, I wonder which ship you have in mind, Ben."

Sisko turned to him and smiled. "You mean there's more than one ship around?"

"Okay, but you still haven't told me how you can sneak up on a thing like that, even with just one ship."

"I'll get to that right now, sir. According to Intelligence, the array is capable of detaching cloaked ships as far away as two thousand light-years. By the time the Defiant got around the Argolis Cluster, the Dominion would already know we were coming."

Ross nodded grimly. "You'd have more than a dozen Jem'Hadar ships on you before you even got close."

Sisko returned the nod. "We need to have the element of surprise on our side. It's the only way."

"What are you suggesting?"

"That I take the ship through the Argolis."

"You can't take a ship through there! You'd be cut to pieces."

"That's exactly what the Dominion thinks," Sisko told him proudly. "But if we came at them from the Argolis, they wouldn't know what hit them."

"What makes you think you can get through?" the admiral asked again.

"Dax says she can navigate around the gravimetric distortions. She's studied protostar clusters and she knows what to look for."

Ross glowered at the star chart, then at Sisko, then the chart again. He wanted to believe it could be done. Even more, he wanted that array shut down.

"It's a gamble," Sisko agreed to the silent protest. "But it's one I'm willing to take."

Troubled, Ross dealt with the fact that part of his job as flag admiral in a war was to take just this kind of risk, and also to trust the people he'd asked to give him ideas. If he didn't take suggestions, no matter how dangerous, eventually people would stop giving him their best ideas. They'd start assuming he wouldn't accept this or that, and they'd quit trying.

A recipe for disaster.

Stopping himself from pushing too hard, Sisko held his breath and waited. The admiral had the facts.

Sisko cut short an anxious step forward. "As soon as we've finished repairs on the Defiant."

Ross shrugged with just his eyebrows. "Keep me posted."

With a crisp about-face that really wasn't necessary, Sisko bolted for the door and mastered himself only enough to keep from running down the corridor. In the turbolift, he tapped his combadge.

"How are those repairs coming?"

"O'Brien says we should be spaceworthy in twenty-four hours or less. We're also being re-armed and having our stabilizers -- "

"Tell him to cut any corners he can. I want to be ready in twelve hours."

"Come back to my office for a moment, would you? Something else has come up."

"Right away, sir. Sisko out. Dax, are you still there?"

"I've just been ordered back to the admiral's office. Keep up the repair process and muster all hands for a crew meeting at ten hundred. Sisko out."

The turbolift almost got a hemorrhage when he made it reverse course all the way back through the interior of the station on express setting, but in less than three minutes he was back in the admiral's office -- and he didn't like that. The longer he spent around Ross, the higher were his chances of blowing the delicate balance he'd set up.

The admiral had no secretary at the moment, so Sisko strode through the outer office and chimed the door, and was immediately admitted back into Ross's presence.

"You wanted to see me, Admiral?"

Ross turned from his personal monitor. "I just got word. Captain Bennet's promotion came through. At my recommendation, Starfleet's putting her in charge of the Seventh Tactical Wing. She's one of the best adjutants I've ever had...strong grasp of strategy, and an ability to see the big picture."

Sisko knew he was sinking fast, but there was only one response for this --

"It doesn't sound like it's going to be easy to find someone to take her place."

Unable to keep his expression in check, Sisko tried to appear astonished. "Sir?"

Ross smiled -- Damn, he thinks he's doing me a kindness!

"I've been very impressed with you these last few weeks. I think we're going to make a good team."

Sisko struggled not to groan. "Thank you, sir..."

"Your assignment is effective immediately."

Just before he managed a resigned nod, Sisko felt his spine go stiff with interior assessment of what Ross had just said. Starfleet lingo was like legal lingo -- now meant now.

"Immediately, sir...what about the Argolis mission?"

"Commander Dax will captain the Defiant."

A cold pit opened in Sisko's stomach. A risky mission was one thing when he was in charge -- but now, with the idea of sending his crew out without him, things clicked into place and the full measure of danger bloomed before him.

With an internal flinch, Sisko realized that Ross might be misinterpreting his hesitation as some kind of doubt in Dax's abilities. That's all they needed! To have a whole new command team assigned!

"Absolutely, sir," he pushed in quickly. "I'd just...gotten used to the idea of commanding the mission myself."

But Ross wasn't moved. How many assignments had he himself been forced to give up because he was needed somewhere else? Sisko knew that was the burden of an admiral, and a captain's attachment to his crew and ship just couldn't play too deeply into overreaching plans and needs. He also knew that Ross understood the value of that attachment and probably hadn't made this damned decision lightly.

He'd blown it. He'd done his job just a little too well. Impressed Ross with the plans for covert assaults, and now his plan for the Argolis mission had broken the fine structure he'd set up. The balance had cracked, and now he was going to fall into the fissure.

With a sympathetic glance, Ross motioned to several padds stacked on his desk. "Look over these tactical reports. I want your thoughts on the Bolian operation. We'll meet here at 0600 tomorrow morning."

With numb hands, Sisko picked up one of the padds and gazed at it.

Ross sat down at the desk behind which he himself was trapped. "Ben? Congratulations."

Forcing a plaintive grin, Sisko nodded. Then he turned and left. What else could he do? Argue?

Locked in at Starfleet Command.

What would he tell the crew? Go out and risk your lives in the most dangerous mission so far in this war...but go without me?

And what would he tell Martok?

How would he ever get back to DS9?

Diane Carey is the bestselling author of numerous acclaimed Star Trek® novels, including Final Frontier, Best Destiny, Ship of the Line, Challenger, Wagon Train to the Stars, First Strike, The Great Starship Race, Dreadnought!, Ghost Ship, Station Rage, Ancient Blood, Fire Ship, Call to arms, Sacrifice of Angels, and Starfleet Academy. She has also written the novelizations of such episodes as The Way of the Warrior, Trials and Tribble-ations, Flashback, Equinox, Decent, What You Leave Behind, and End Game. She lives in Owasso, Michigan

Part of Star Trek: The Next Generation
By Diane Carey
LIST PRICE: AU$ 5.99
PRICE MAY VARY BY RETAILER