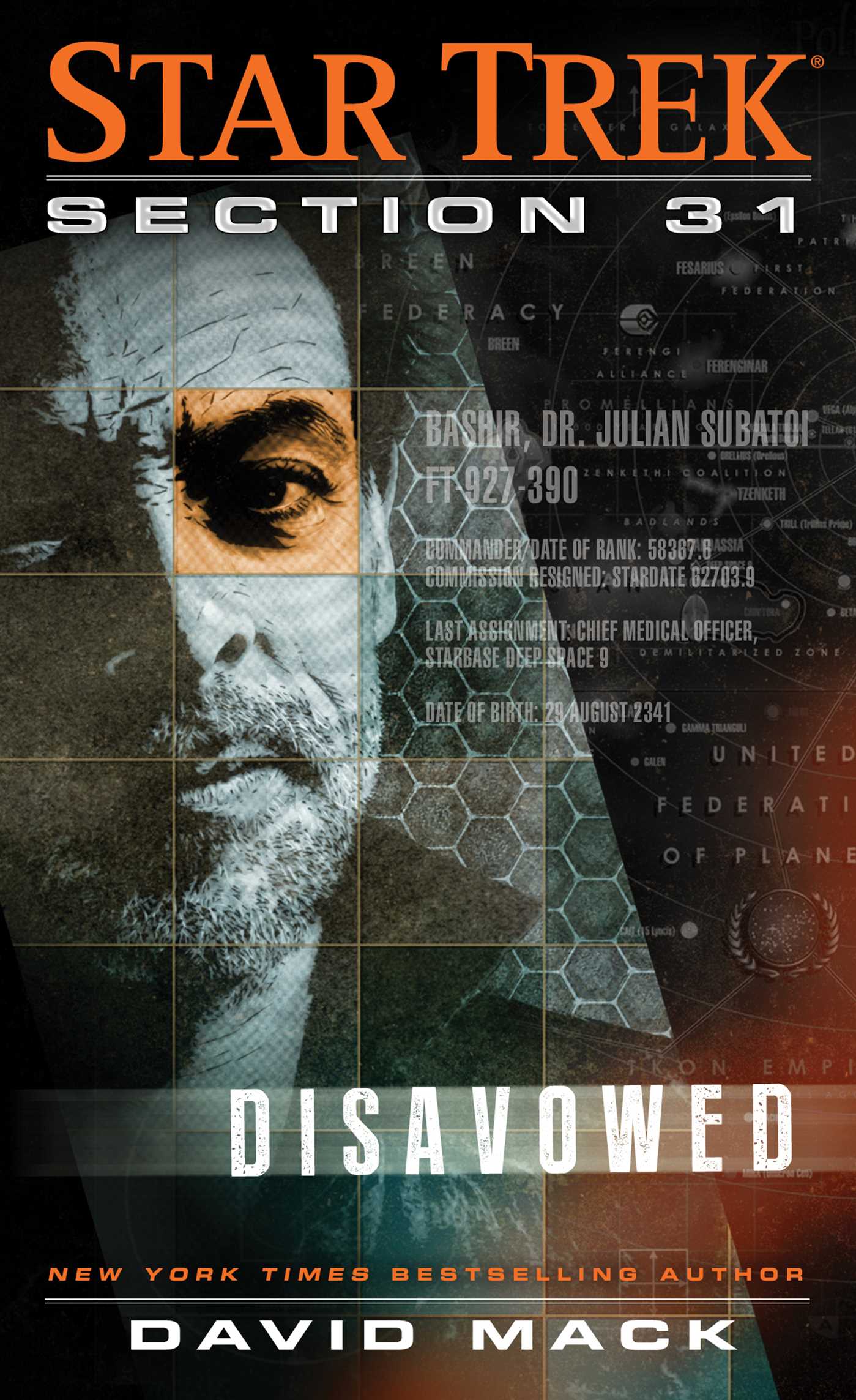 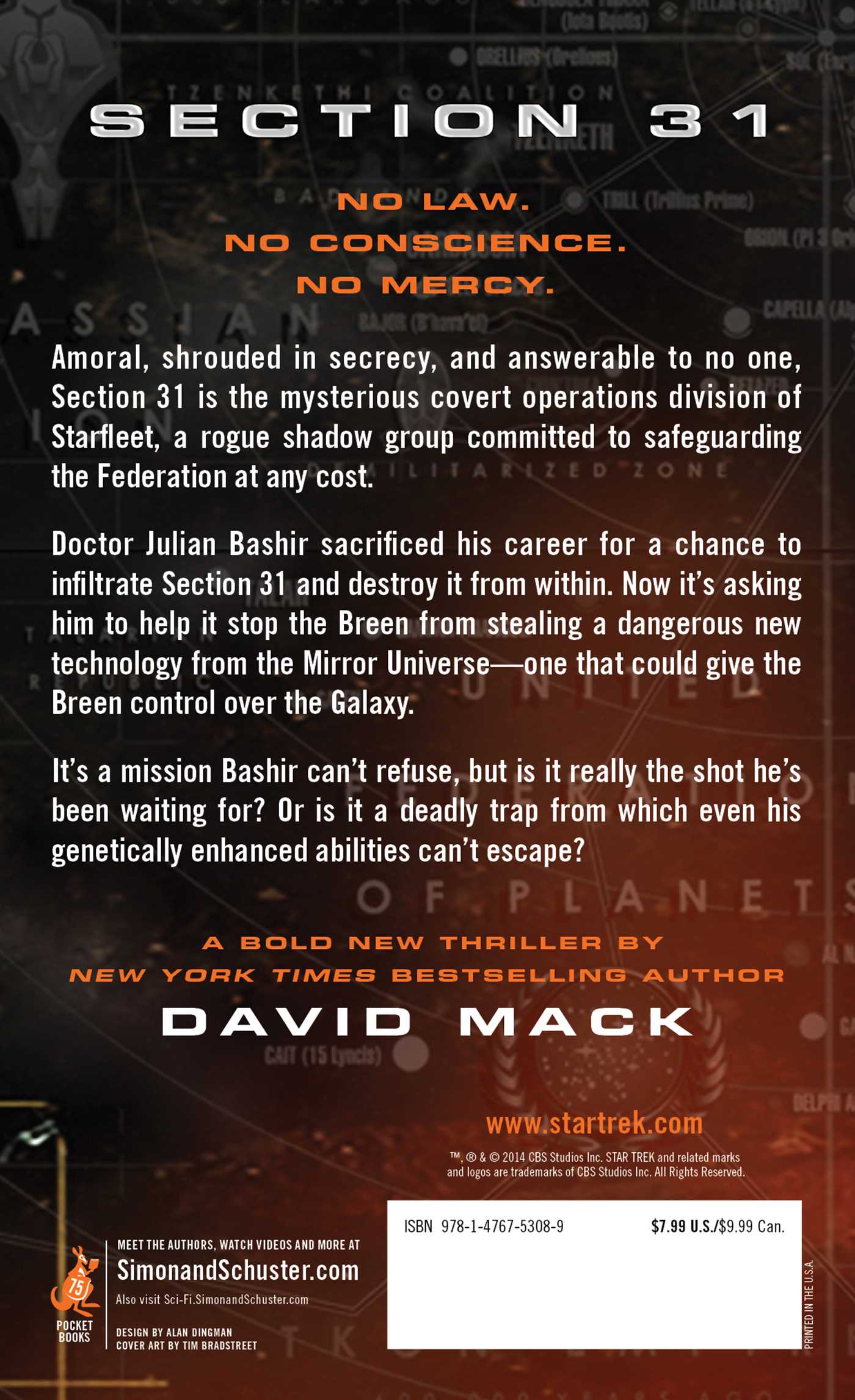 Amoral, shrouded in secrecy, and answerable to no one, Section 31 is the mysterious covert operations division of Starfleet, a rogue shadow group committed to safeguarding the Federation at any cost. Doctor Julian Bashir sacrificed his career for a chance to infiltrate Section 31 and destroy it from within. Now it’s asking him to help it stop the Breen from stealing a dangerous new technology from the Mirror Universe—one that could give the Breen control over the galaxy. It’s a mission Bashir can’t refuse—but is it really the shot he’s been waiting for? Or is it a trap from which even his genetically enhanced intellect can’t escape?

Star Trek: Section 31: Disavowed One
All that stood between Thot Tran and salvation was unrequited love and the edge of the universe.

In recent years his scientific career had been marred by one failure after another. Despite grievous setbacks, he had retained his position as the director of the Special Research Division, one of the loftiest posts in the Breen Confederacy, but one more failure would be the end of him. Domo Pran, the leader of the Confederacy, had made that grim fact abundantly clear. Now Tran’s entire career hinged upon proving a mad hypothesis before Pran’s patience expired.

To make matters worse, his only hope of success lay in the eccentric genius of his Tzenkethi collaborator, Choska Ves Fel-AA. The humanoid outworlder was strangely beautiful to Tran’s eyes. Lithe and silver skinned, Choska was blessed with coppery tresses that fell past her elegant shoulders, and the irises of her ovoid eyes glittered like gold. Upon first meeting her, Tran had shaken her delicate hand—and even through his uniform’s insulated glove his flesh had prickled from an electric tingle. Though he’d been warned ahead of time that Tzenkethi could impart such an effect upon contact, he had been unprepared for the thrill it had given him. Every detail of Choska’s being was rapturous. Her voice was melodic, like the ringing of chimes incapable of striking a false note. Her movements were grace incarnate. Even her most outlandish ideas and outrageous theories possessed a strange elegance.

Tran’s life and career both hung by a slender thread, and all he could think about was the fact that, against all reason, he had fallen in love with an alien who would never love him back.

Not that he hadn’t set limits. When Choska had suggested they convert their shared laboratory space aboard Ikkuna Station into a gravity envelope enclosure, so that all its surfaces—the walls and ceiling, as well as the deck—could be utilized as operational space, Tran had invoked his privilege as project’s director to keep their lab securely on the floor. After all, Ikkuna Station had been built by, and was run by, the Breen, just inside Confederate space, and converting the bulkheads and overheads to serve the same functions as the deck would have been quite tedious and time-consuming. Which had made it all the more shameful, in his opinion, that for a moment he actually had considered granting her request before he’d vetoed it.

Since then, her already inscrutable façade had become impenetrable, hardened against his searching gaze by what he could only presume was resentment. The only discourse that passed between them now was the cold, dry jargon of the laboratory.

Choska spoke without shifting her eyes from the master console in front of her. “The generator is at full power. Membrane penetration anticipated in twenty seconds.”

“Noted. Increase power to the threshold stabilizer on my mark.”

Their shared project was plagued by so many variables, so many unknown factors, that Tran had no idea if his proposal would work when translated from theory to practical application. All he could do was hope that the unrealized potential he had seen in the Tzenkethi’s designs for an artificial wormhole generator had not been misguided—or, worse, a delusion.

The latter scenario was all too real a possibility for him to ignore. He had been the chief architect of the Confederacy’s recent failed plan to salvage from Federation space a wormhole-propulsion starship that hailed from an alternate universe. That botched mission had squandered billions of sakto, not to mention many lives and several years of research and development. The operation had imploded just shy of success, making its collapse a bitter pill for Tran to swallow. He had been certain the new domo, Pran, would have him killed as an example to others.

Instead, Pran had allowed Tran to retain his post as the director of the Special Research Division, and he had even authorized a substantial budget for Tran’s project to seek out a passage to the alternate universe. Tran had proposed the project to Pran as a means of salvaging some value from their lost investment in the recovery of the wormhole ship, which he was certain had originated in a close parallel dimension, a nearby quantum reality much like the one they inhabited. Although there were decades of theoretical research supporting parallel universes, many Breen scientists continued to scoff at the notion such realms could possibly exist in anything resembling stable configurations.

Tran was gambling his last measure of credibility on proving them wrong.

To do it, he needed the artificial wormhole generator developed by the Tzenkethi. It had not lived up to their expectations when it was first deployed a few years earlier. It had depended upon the existing subspatial geometry of the Bajoran wormhole to give it shape, and it had proved disastrously vulnerable to sabotage and attack. Regardless, it had constituted a major scientific breakthrough—one that Tran now intended to exploit to its fullest advantage.

“Starting.” Choska entered more commands on the console. She stopped when an alert flashed beneath her fingertips. “We’re picking up severe gravimetric distortion.”

“That’s expected. Keep increasing the phase shift. I’ll stabilize the threshold.” On the viewscreen, a broad swath of space trembled. Subsonic vibrations traveled through the deck beneath Tran’s booted feet. Steady tremors from Ikkuna Station’s antimatter generator shook his bones, a tangible manifestation of excitement. “We’re almost there. Get ready to launch the recon ship.”

Choska remained all business. “Recon One at standby.”

Then it happened. All of Tran’s predictions came true.

Space-time ripped itself apart outside Ikkuna Station, and a rift in the invisible barrier between quantum realities was revealed. It was a wound in the skin of the universe. Brutishly cut, its edges glowed with energies beyond measure or definition. The ragged, irregular aperture dilated, revealing another cosmos: one populated by the same stars, all at once entirely familiar and yet undeniably foreign.

The Breen scientist gathered data from his sensor panel. “The quantum signature matches the ship we found on Tirana Three. That’s definitely its universe of origin. Launch the recon ship.”

“It’s away. Crossing the threshold now.”

Tran knew his teary-eyed, hopeful gaze was safe behind his snout-shaped mask—the ubiquitous identity-erasing uniform of Breen society. And if his voice should quaver with emotion, he could trust his mask’s vocoder to strip it bare and garble it into meaningless machine-speak. How can I ever reveal myself to Choska while I remain a prisoner in my own flesh? How can I show her that I’m more than just a cog in the Confederacy’s machine when I can’t even tell her my real name?

His maudlin reflections were banished as the rift contracted without warning, shredding the reconnaissance vessel into a cloud of sparking debris. He activated a review of the sensor logs even as he vented his frustration at Choska. “What happened?”

“As I warned, the passage between quantum universes is intrinsically unstable. Based on sensor readings from the moment of collapse, I would postulate that ambient energy emissions from the reconnaissance vessel destabilized the throat of the wormhole between the universes.”

“Fortunate, then, that the reconnaissance vessel was an automated ship with no crew.”

“Yes, that was a prudent precaution on your part, Thot Tran.” Choska adjusted some settings on her side of the master console. “It will take several days to analyze the data and devise a plan for shielding vessels that need to pass through the quantum rift.”

Tran knew of no politic way to explain to Choska that they might not have that much time. Domo Pran was eager for results—and he had made it understood that any failure to deliver them would be met with the harshest of punishments. “Do whatever you can to expedite your analysis, Doctor. The sooner we complete this phase of the project, the better.”

“I will do my best.” She downloaded the sensor data to a padd and left the control center—most likely to review the results in the privacy of her office.

Tran watched her leave, knowing he should start his own independent review of the failed recon deployment. But all he could think about was escaping through the rift, with Choska at his side—and cursing the Confederacy, the Typhon Pact, and the Tzenkethi Coalition as he and the magnificent object of his affections left them all behind.