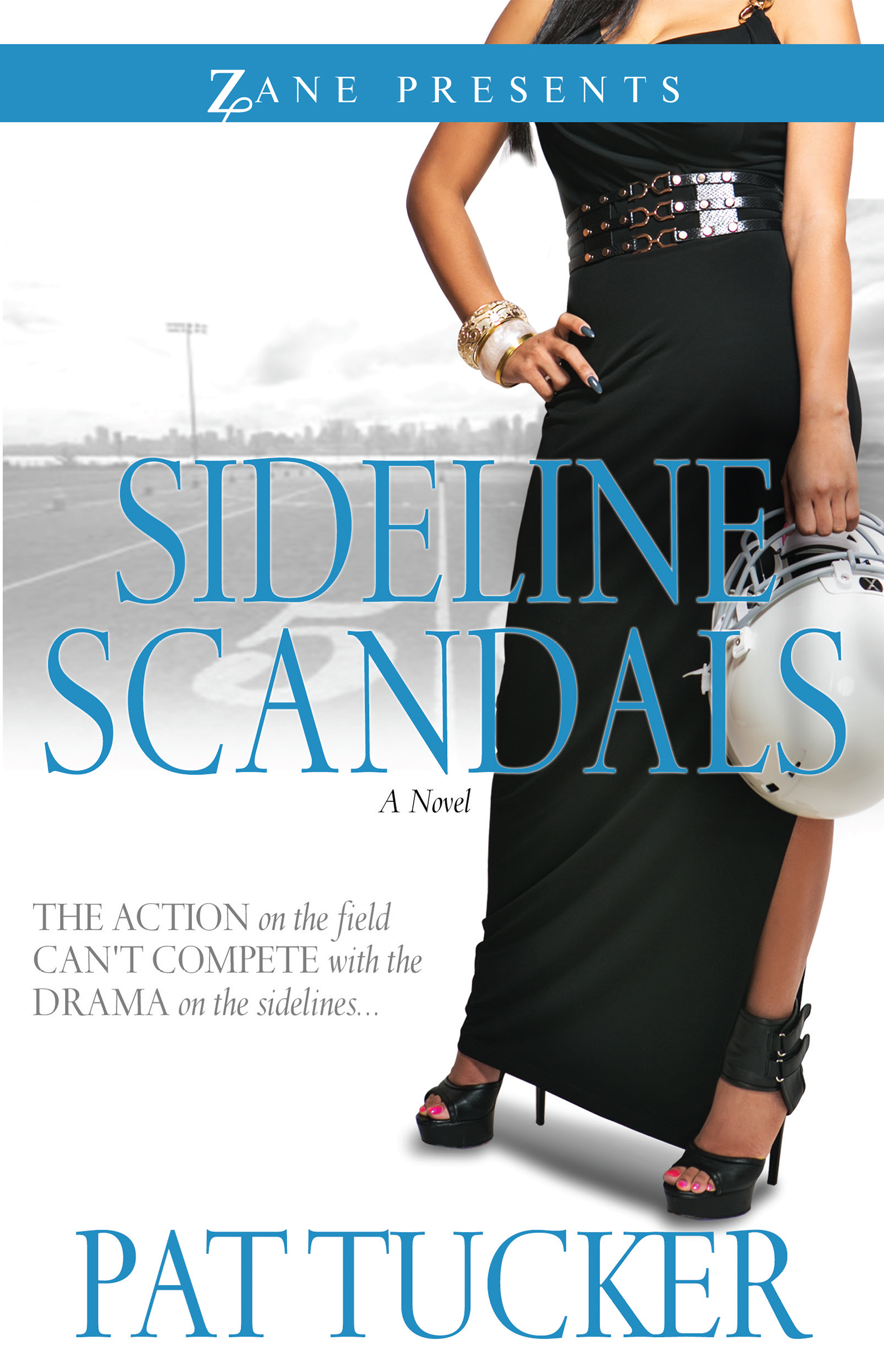 Sasha Davenport started the Football Widows social club, as a way to provide options for women who feel abandoned during the season. Sasha is currently riding her popular Football Widows social club all the way to the top. She's got the right look, and the high-profile job, but the one thing that eludes her is the star player to make her made-for-reality TV life complete. Sasha is nothing like the public image she works so hard to portray. In private, she's not shy about all of the salacious activities she's witnessed and participated in during past seasons.

For new Los Angeles Sea Lions NFL wife Tatayna Bacall, Sundays are the worst day of the week! The shrill of the referee’s whistle on game day literally makes her stomach churn. She's been faking it for so many years, she's now tired. She wants her star quarterback husband to find a job as a sports analyst so that their life can resemble some form of normalcy.

After joining the Football Widows Club, Tatayna realizes there is life outside the huddle. But she'll soon learn that Sasha and the other club members have scandalous secrets which threaten to ruin the star-studded lives they all enjoy.

Behind the club's facade, there's so much infighting among the members they often seem to be playing for opposing teams. By the time Tatayna realizes what Sasha's plans for the future involves, none other than her own husband, these Football Widows will provide enough drama during the season that it doesn't take long before they begin to compete with the action on the field.

SASHA
I turned my upper body to camera two, allowed my eyes to focus, and flashed my dazzling smile. This was when I was at my very best. The camera loved me, and I made sure to show my love right back.

Most of my time was spent at the KTLA Studios located on Sunset Boulevard, between Van Ness and Bronson Avenues. In addition to The Sasha Davenport Show, Judge Judy, was also taped there. Although my show was taped in one of the twenty-three studios, we only used a small section since I didn’t have a live studio audience.

I glanced up at the lighting grid that was suspended from the studio’s high ceiling. It held various colorful light fixtures, but the one that provided a spotlight for me, cast a soft yellow hue. It beamed down on me and kept me warm while we taped the show in the freezing studio. I loved what the lighting did for my complexion on tape. It helped add to my overall polished appearance, which I worked hard to maintain.

I had gotten used to the feel of the Vaseline that helped my lips glide effortlessly across my sparkling white veneers, so my smile was always camera-ready and perfect. I batted my real mink lashes and began to speak.

“So, I’m leaving y’all with this as we gear up for the next NFL season: There’s tons going on behind the scenes. You have no clue!” I winked. “But that’s why I’m here! I’m your girl, and you already know, I’ve got unprecedented access.”

I crooked my index finger at the camera as if to summon it closer.

“Shhhh.” I used that same finger to tap my pursed glossy lips.

“Between you and me, my sources have confirmed that Los Angeles Sea Lions Head Coach Taylor Almond’s new staff will only consist of two familiar faces. That means only two of his assistants are returning! Can you say clean house?” I paused for effect and widened my eyes.

“Now, I don’t know about you,” I said, “but I, for one, knew this was coming. I mean, think about it. After all the drama that happened off the field last season, I can understand why Coach Taylor felt the need to make such drastic sweeping changes. Well, this year, we’re gonna keep our eyes on a few key players, and hopefully, the coaches and their wives will leave the drama to the plays on the field. Stay with us. I’ll be right back after this short break and a message from one of our sponsors.”

“Sasha, you good? You’ve got two minutes,” the director said through my earpiece. That was his way of letting me know I had time, if I wanted, to grab a quick glass of juice, water, or run to the ladies’ room.

I looked up at the camera and nodded. I was gonna stay put.

I needed to use the bathroom, but since we were nearly done taping the show, I figured it’d be smarter to wait. A couple of minutes later, the sound of the director’s countdown stopped my thoughts. I focused in on the correct camera and waited to hear my cue.

“Thanks for staying with us. Well, that’s it for this week. Remember, I AM Saaaaasha Davenport! There’s no one better. I am fierce, fantabulous, and very famous. Until next time, sweethearts, Muah!”

I made a wide sweeping motion with my arm and gave the camera my signature palm kiss. I smiled until the director yelled the magic words in my earpiece.

The floor crew, which consisted of two camera operators, and a floor director, broke out in applause, and I hopped off the bar-stool we used for my closing monologue. The Sasha Davenport Show was going well, but lately I’d felt myself becoming bored. I needed more excitement. It wasn’t that the thrill was gone or anything like that, but I felt like it was time for me to step things up.

Those were neither new nor sudden thoughts for me. From day one, my plan was to use this show as a stepping stone to bigger and better things. The problem was, I had become comfortable and stopped striving to get to the next level.

“Thanks, guys,” I said as I made my way off the set. I cut through the control room, which is the nerve center of the television station, to get to the long hallway that led to my dressing room that also served as my office.

“Thanks, guys,” I repeated.

I saw video of myself on one of the many monitors, but didn’t stare too long because I didn’t want anyone to think I was trying to nit-pick. The director, sound engineer, and video editor, barely looked up from their work as I slipped in. I knew the drill and left them to their work.

The moment I walked inside my office, my cell phone rang. I told myself that was part of the problem, too. Each time I began to think about what it might take to go to the next level, something distracted me, and I never revisited my plans.

I vowed not to allow that to happen this time as I greeted the caller. “This is Saaaasha,” I sang.

“Sasha, you don’t know me, but I’ve got some information that you might be able to use on that little show of yours,” the caller said.

“Umph, well, if I don’t know you, how did you get my number, and what makes you think your information is of any use to me and my little show?”

The woman’s hearty laugh made me pull the phone away from my ear.

I didn’t know whether to be offended or sit back and listen to what she had to say. “You know my kind, huh? And what kind might that be?”

“Well, honestly, I didn’t think it’d be this hard. But whatever. If you wanna play it like that, I’ll hold on to my information. I guess you’ll have to run to play catch up and chase the story like everyone else once it breaks,” she said.

People like this caller made me sick. I made a mental note to check my producer slash assistant because I didn’t have time to be bogged down with this kind of foolishness. Everybody and their mama thought they had a line to some good exclusive hot gossip, until they realized I didn’t pay for that type of information. And I was certain this time was no exception.

“Besides, I shoulda known you was one of them ol’ stuck-up—”

“Oh, no you didn’t!” I snapped and cut her off. “How did you say you got my number again?”

I frowned. By now, I was pissed and wondered what could be done about these freaks who thought it was cool to pay $39.95 to get anybody’s cell phone number off the Internet. I was about to check her when there was a quick knock at my door before it opened. My producer, McKenzie Fields, slipped into the dressing room.

I guess the scowl on my face must’ve told her immediately there was a problem.

“You know what, I don’t have time for games. If you have a legitimate show or story idea, you need to go through the proper channels like everybody else. Regardless of how you got my number, here’s a bit of advice, it is tacky and classless to use a stranger’s number out of context,” I said.

McKenzie moved closer. “Who are you talking to?” she asked.

The caller screamed, “I know your ball-chasing, gold-diggin’, opportunist behind ain’t trying to give me no lessons on class and tact!” She laughed. “Especially when we know you ain’t got an ounce of either one!” She laughed louder like it was all she could do to try and catch her breath.

I sucked my teeth and pressed the END button on my cell phone. Then, I turned my anger to McKenzie. She needed to handle this kind of mess. I had other things on my mind, and filtering out the fans from the freaks was way beneath my pay scale.

“Who was that?” she insisted.

“Yeah, that’s exactly what I wanted to talk to you about.” I pointed toward the chair. “Sit, please.”

By day, Pat Tucker works as a radio news director in Houston, Texas. By night, she is a talented writer with a knack for telling page-turning stories. She is the author of Somebody Has to Pay, The Cocktail Club, Sideline Scandals, Party Girl, Daddy’s Maybe, Football Widows (soon to be a movie), Daddy by Default, and Lachez (an original e-short). She is the coauthor with Earl Sewell of Loyalty Among Friends and A Social Affair and has participated in three anthologies, including New York Times bestselling author Zane’s Caramel Flava. A graduate of San Jose State University, Pat is a member of the National and Houston Association of Black Journalists and Sigma Gamma Rho Sorority, Inc. She is married with two children.

SEE ALL
See more by Pat Tucker
Thank you for signing up, fellow book lover!