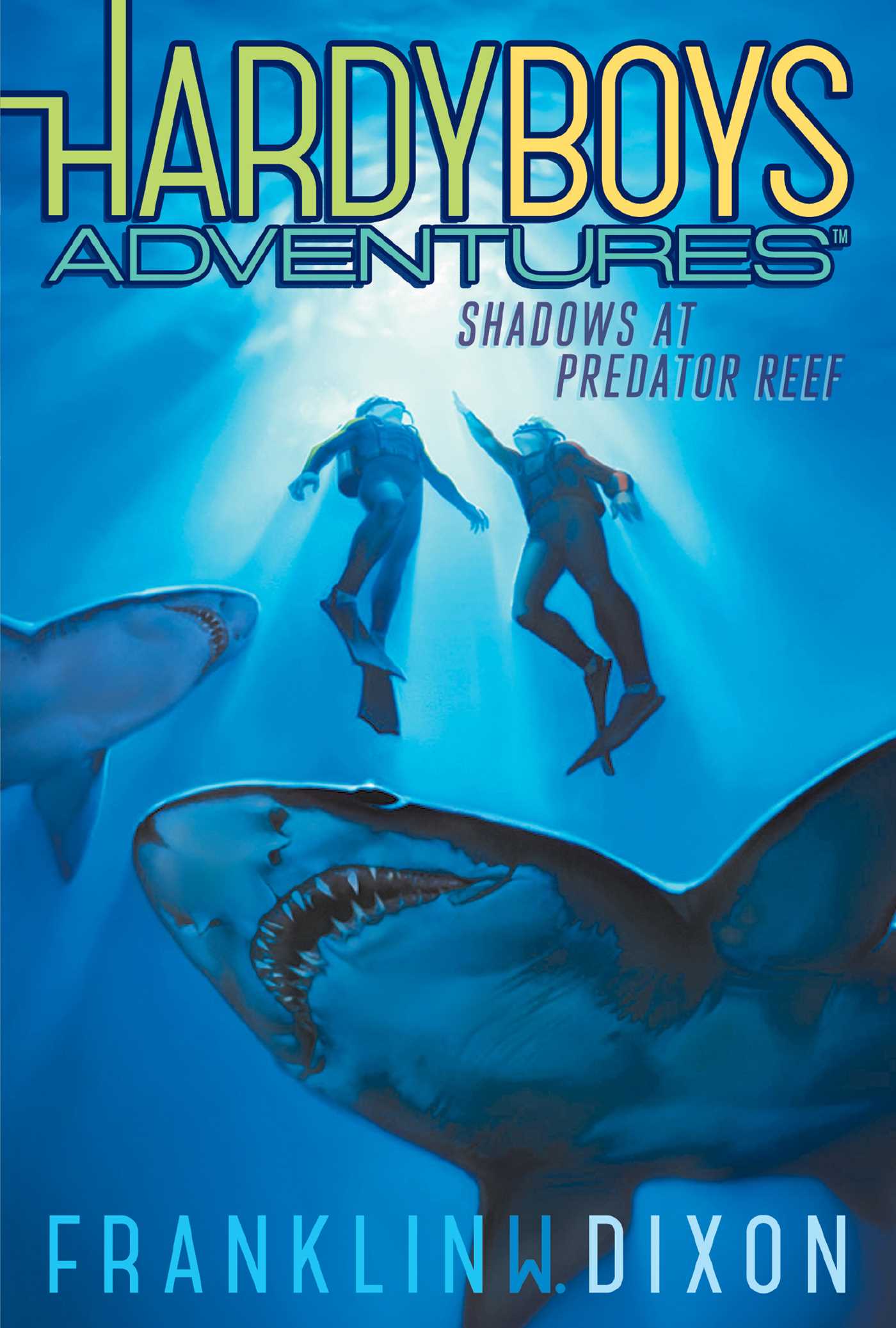 Frank and Joe might be in over their heads when they discover an aquatic smuggling operation in this chilling Hardy Boys adventure—a fresh approach to a classic series.

When Frank wins an internship at the Bayport Aquarium, he’s stoked at the chance to not only earn school credit, but to also geek out about one of his favorite subjects—aquatic life. And his brother Joe is equally jazzed about taking scuba diving lessons from the super-cute instructor, Aly. But both boys’ excitement comes screeching to a halt when the aquarium’s most valuable asset goes missing: a rare two-hundred-pound sea turtle named Captain Hook.

Frank and Joe stumble upon a network of underground tunnels hidden beneath Bayport…and realize the aquarium is a secret entry point. Could the aquarium be the newest target of a sinister aquatic smuggling ring? And can the boys snag the gang’s mastermind before they end up in treacherous waters?

Shadows at Predator Reef DIVE TIME 1 JOE
IT WAS THE LAST DIVE of the morning. From the water’s depths, I checked the air tank pressure on the high-tech dive computer I wore around my wrist like a watch and signaled to the other divers in preparation for my rise. It wasn’t until I reached the surface that I saw the big gray dorsal fin slicing through the water and heading straight at me.

I could practically hear the Jaws theme music reverberating through my head as the fin grew larger and larger. I glanced around, but there was nowhere for me to go. The beast sped closer until its sleek gray snout rose out of the water mere inches from my face.

It was a huge . . . dolphin! The playful animal leaped over my head and slid back into the water on the other side, chattering happily.

“Great job on that last dive, Joe,” my supercute scuba instructor, Aly Hawke, called from the side of the ginormous water tank. “I think Scooter approves.”

“Well, I have an excellent teacher—” I started to reply just as Scooter the bottlenose dolphin spit a fountain of water in my face, ruining my attempt at being suave. I think he was jealous.

“Thanks, Aquaman,” Aly giggled. “Now hop on out, do an equipment check, and then you can head over to the reef for the opening-day celebration.”

Scooter gave my backside a helpful nudge as I climbed out of the dolphin tank at Bayport Aquarium, where I was taking a scuba certification course. I had a feeling diving skills would come in handy someday—and for more than just fun.

See, my brother Frank and I have this knack for solving mysteries. We’ve been doing it ever since we were kids in our hometown of Bayport, and over the years I’ve learned that it never hurts for a detective to know a few extra tricks. It might still be a while before Frank and I could get our investigators’ licenses (not that that ever stopped us before), but soon I’d be a card-carrying scuba diver.

Frank and I had both caught the ocean bug on our last big case, which had us spending a lot of time on the waterfront aboard a restored Revolutionary War ship. The ship was docked just across the harbor from the Bayport Aquarium, which had given Frank the idea of volunteering at the aquarium to help out with the grand opening of their new exhibit. Predator Reef was going to be the world’s largest indoor habitat of its kind, designed by world-famous architect Bradley Valledor. Mobs of visitors and news media had been lining up all morning for the exhibit’s big reveal.

Frank tried to get me to volunteer too, but I wasn’t as interested in learning all that marine biology stuff he’s always going on about (I get enough of that in science class, thanks!). But when he told me the aquarium was offering scuba-diving classes? Well, that’s more my style. Exploration! Adventure! Danger! Not that diving in the dolphin tank was exactly dangerous. It was pretty mind-blowing, though. I think the technical term for it is “flipping awesome!” And it wasn’t just the dolphins that were blowing my mind.

Aly was only a few years older than me, and she was already a master diver, so she was talented as well as pretty. And she really did look extra cute in her scuba gear. She had scheduled our class early so we could finish in time for Predator Reef’s big ribbon-cutting ceremony at noon. She was taking part in the festivities too, diving in the tank to feed the fish along with the rest of the BAD team (that’s what the Bayport Aquarium Divers call themselves).

I wasn’t involved in the exhibit’s prep and planning like Frank or Aly, but I was excited to see it. They were keeping it under wraps until the big unveiling, and from everything Frank had told me, it sounded totally out of this world: hundreds of different species of sea animals, including a giant turtle, rays, and small sharks.

I was looking forward to seeing the BAD divers in action too, although not all of them were as enticing as Aly. There was one in particular I actually wouldn’t have minded seeing eaten by a shark. Aly’s ex-boyfriend Carter was as clueless as he was obnoxious. I really didn’t know what she had seen in him—other than the fact that he was featured in national scuba-diving magazines and that all the girls at Bayport High seemed to be gaga over him.

Did I mention that I really, really don’t like the guy?

When he showed up in the dolphin arena after class, it was almost enough to ruin my morning.

“Hey, babe,” Carter called to Aly from the staff tunnel. “You done babysitting the newbies yet? We’ve got a hot date to get to.”

Aly rolled her eyes. “Having to work together as dive buddies is not a date, Carter. And I’m not your babe anymore.”

“Sure you are, you just don’t realize it yet,” he said. He looked so smug, I didn’t need a special computer to know my annoyance meter was rising to dangerous levels.

“Show her some respect, man,” I said as I packed up my dive kit.

“Mind your own business, newb.” Carter didn’t look so smug anymore. But he did look angry. I don’t think Scooter was the only jealous one. “Babe, tell me you’re not interested in this twerp?”

“You have water in your ears, Carter? I thought she asked you not to call her that.” I stood my ground as he stalked toward me.

“Sheesh, knock it off, Carter,” Aly said. “Joe is just taking my class. Besides, it’s none of your business even if I was.”

I have to admit that I liked the way that last part sounded. Now it was my turn to look smug. But Carter sure didn’t like it. He might have actually been getting ready to do something about it too, but Scooter had the last word, slapping the pool with his tail and soaking us both in a sheet of water.

Aly laughed and gave Scooter a kiss on the nose. “Aw, my hero.”

She looked back over her shoulder at Carter and me and shook her head as she walked off. “Boys.”

I think just maybe the little sparkle in her eyes was meant for me.

Carter must have thought so too. He waited until Aly was out of earshot and stared me down before chasing after her.

“You’d better watch your back, newb,” he said, just low enough so none of the other divers could hear. “You’re gonna be fish food when I’m done with you.”
Franklin W. Dixon