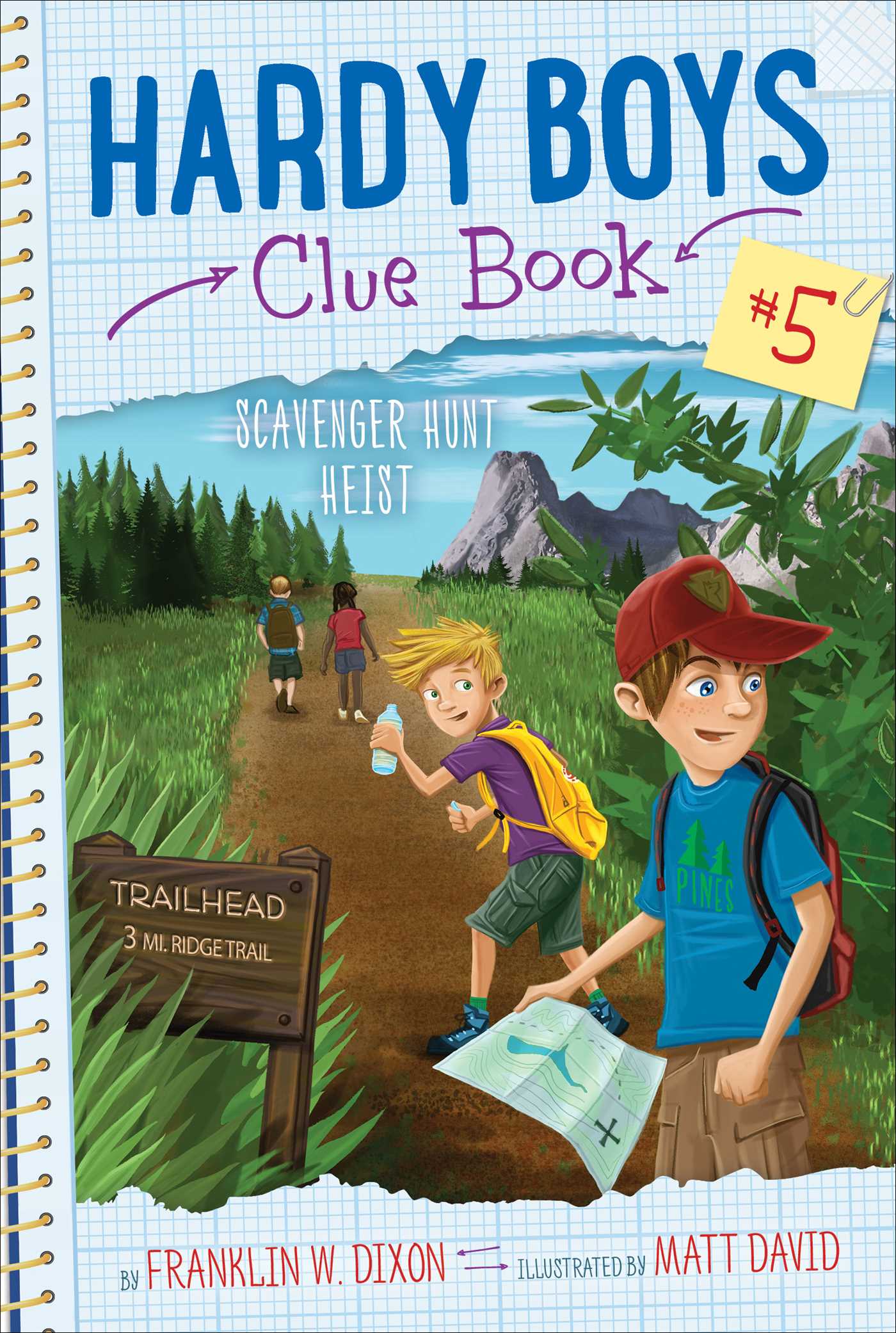 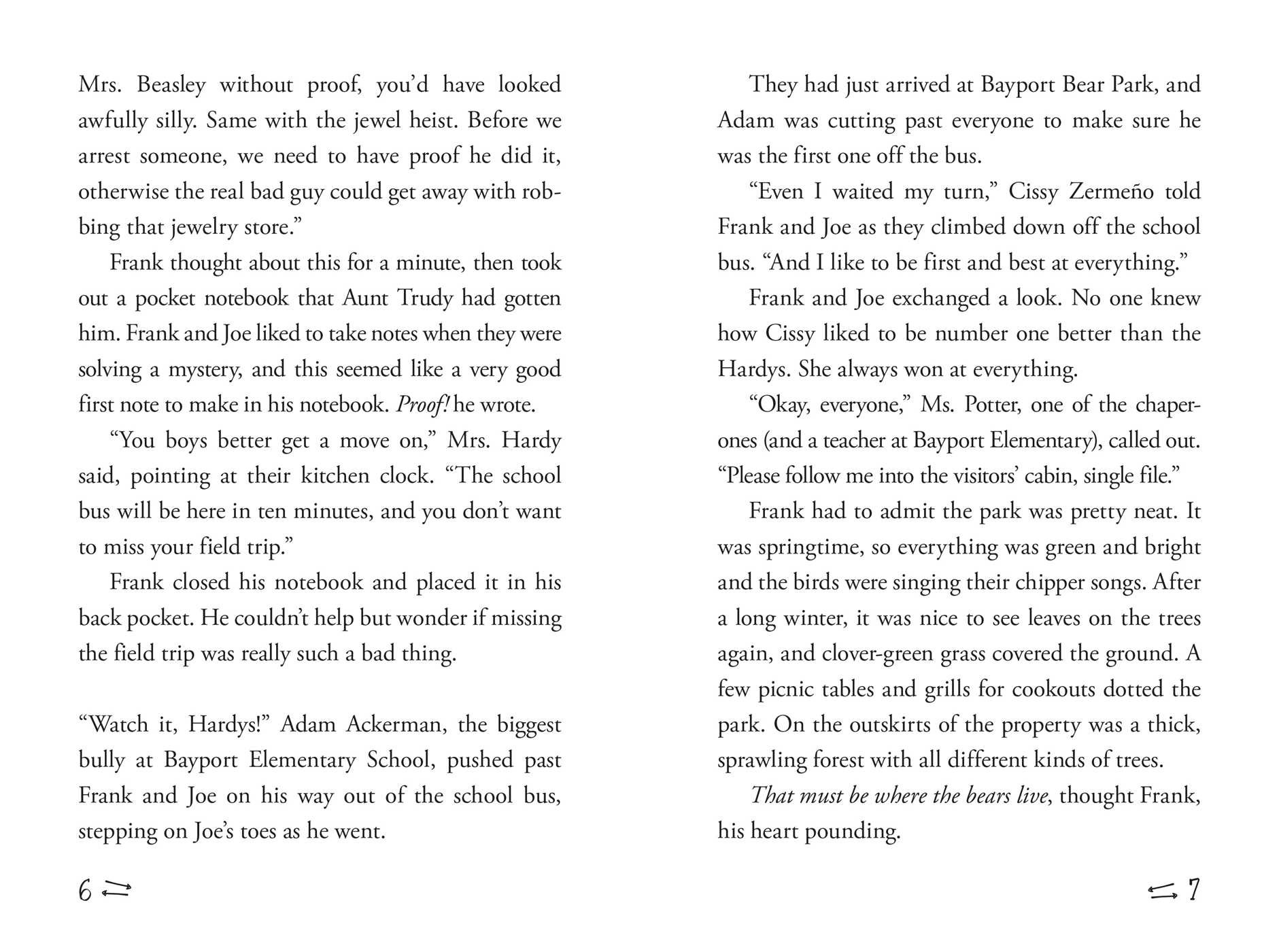 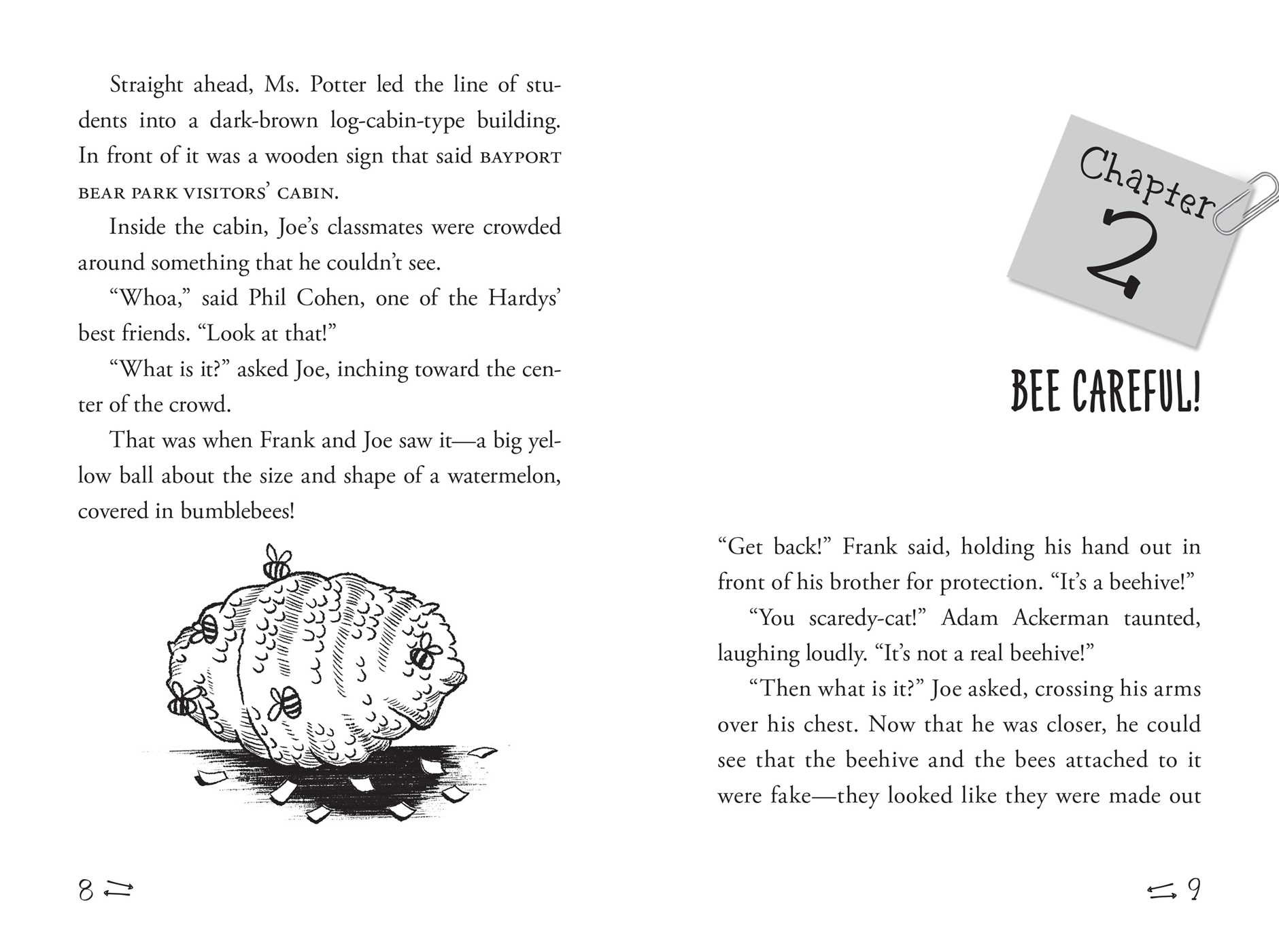 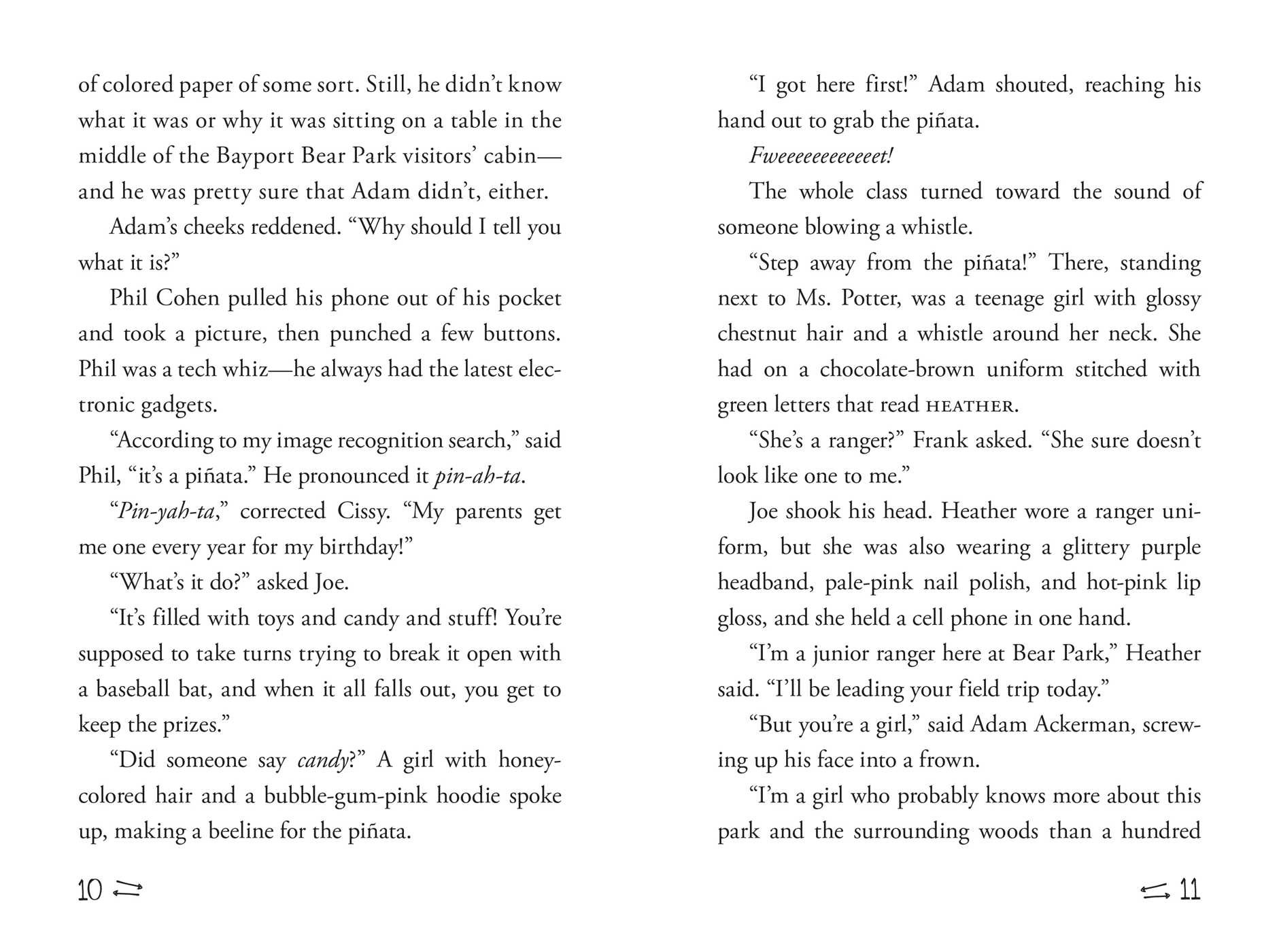 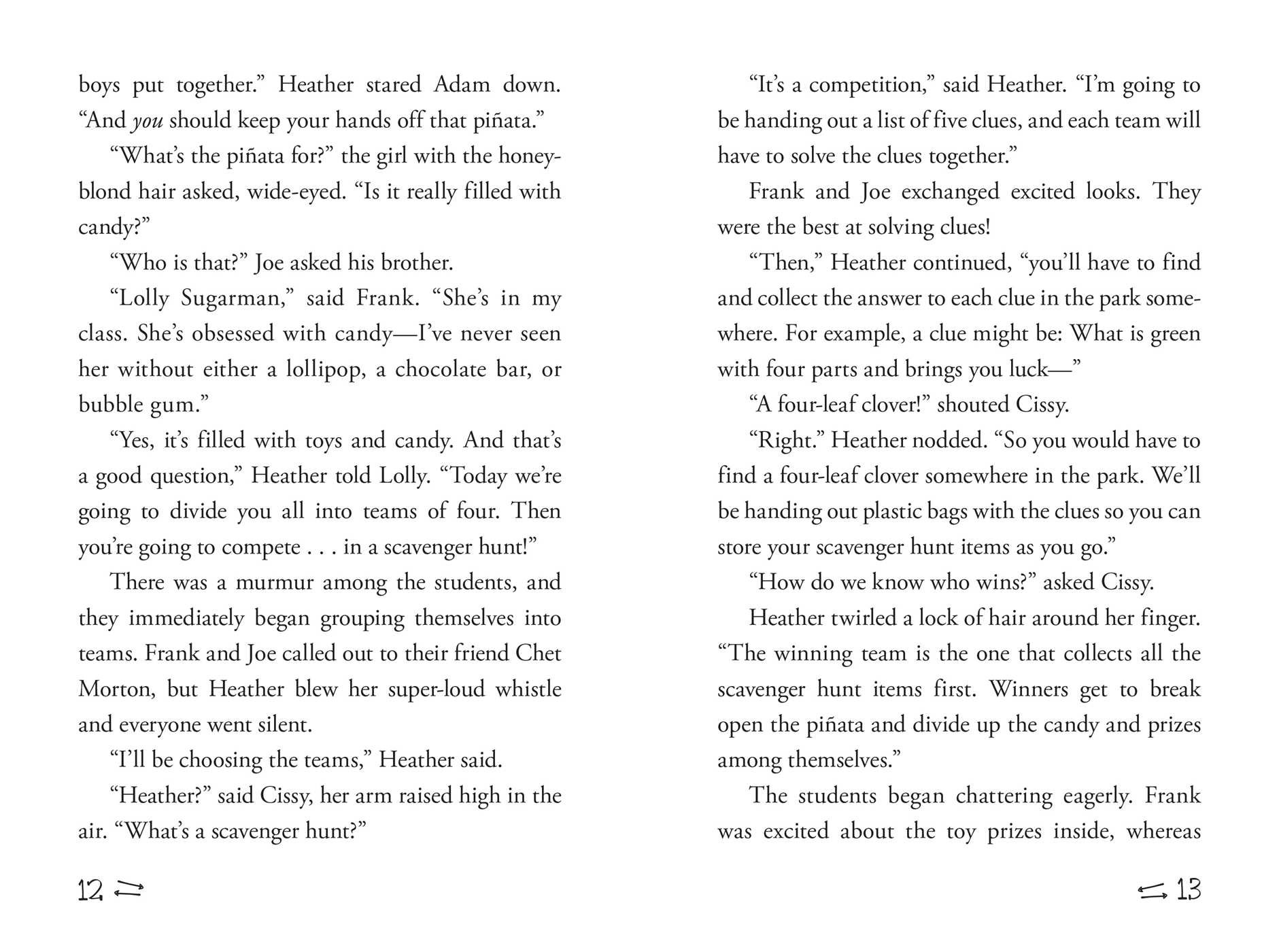 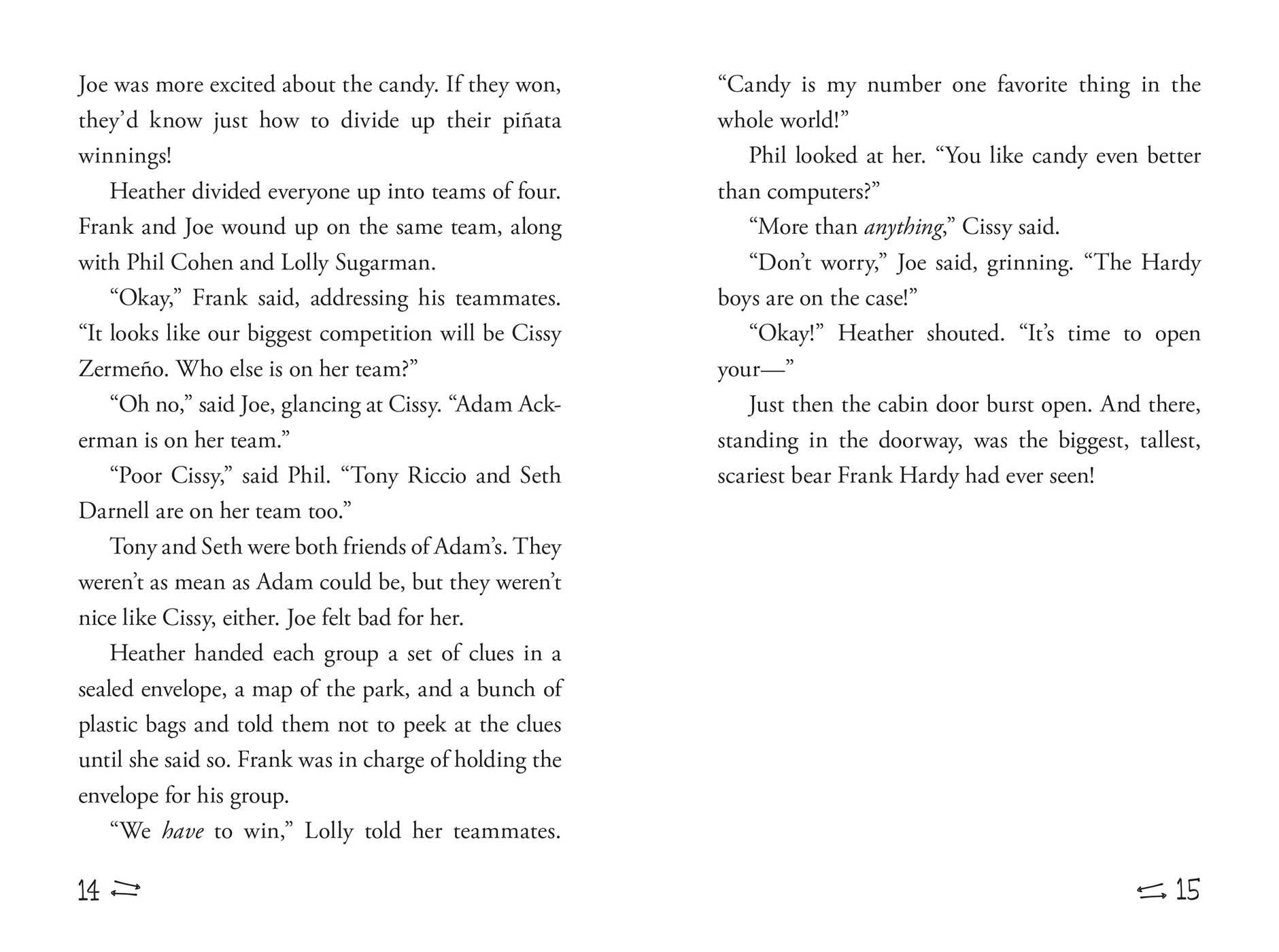 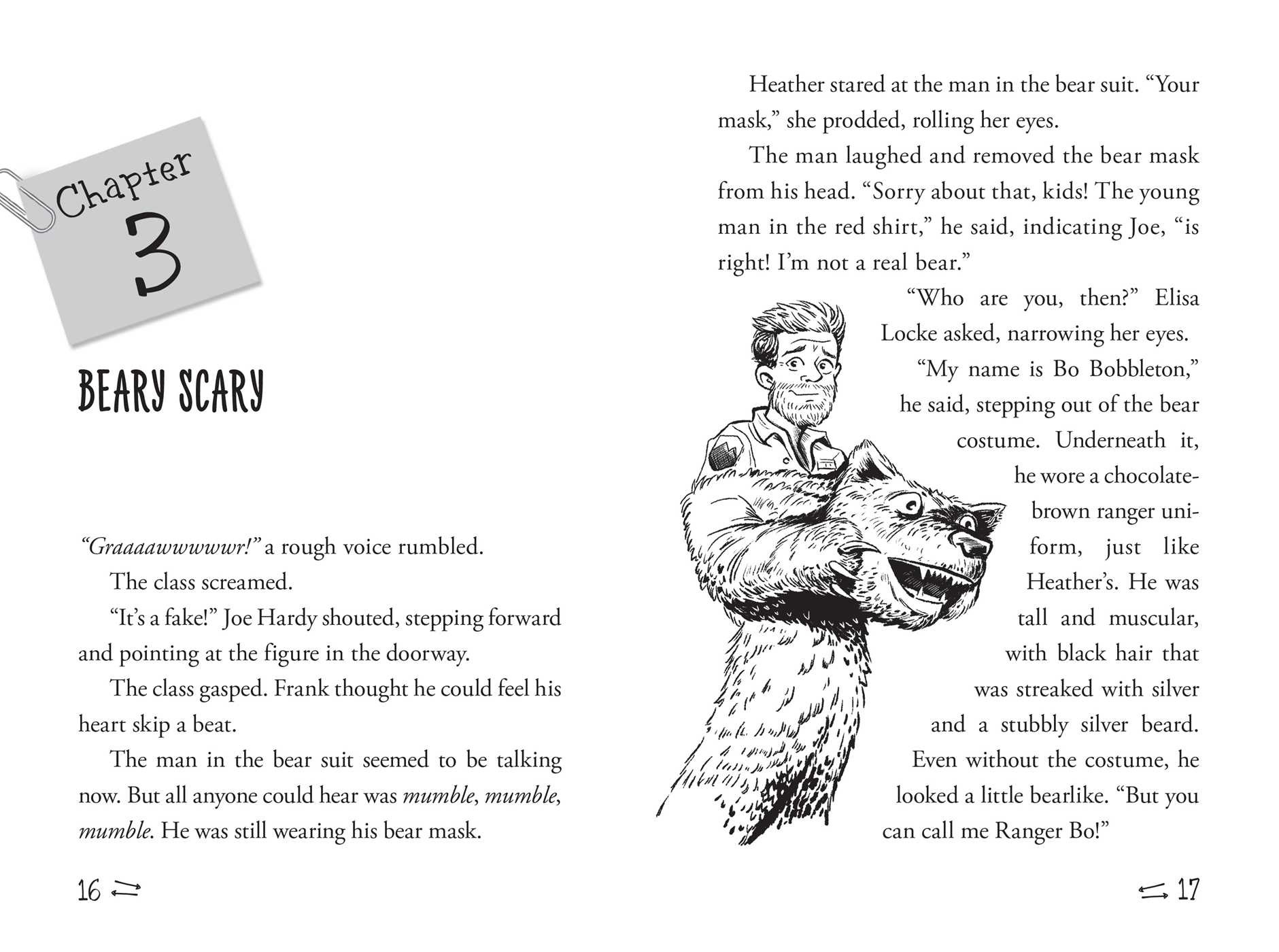 Detective brothers Frank and Joe must solve another intriguing mystery in the fifth book in the interactive Hardy Boys Clue Book series.

Frank and Joe are excited for the class trip to Bayport Bear Park. When they arrive, the entire class is greeted with a beautiful sight: a pile of prizes and goodies in the middle of the room! Their guide, Marnie, explains that they will be split into teams to complete a scavenger hunt through the park. Whoever solves the clues the fastest will win all of the prizes.

But after they come back from solving the first few clues, the entire pile of prizes has been destroyed, with half of the loot completely missing! Can Frank and Joe figure out who the Treat Thief is and save the trip?

Frank Hardy jumped nearly a foot in the air, splashing the milk from his cereal bowl all over his brand-new navy-blue T-shirt. “Joe! That’s not funny!”

“It’s not?” Eight-year-old Joe Hardy disagreed. In fact, he was laughing so hard, he thought orange juice would come out his nose. “Don’t worry, Frank. I know I do a killer bear impression, but it’s just me.” He laughed some more while his brother grumbled under his breath.

Joe’s laughter died in his throat as soon as he heard his father, Fenton Hardy, shout his name.

“Stop teasing your brother,” Mr. Hardy said, peering at Joe over his newspaper. But Joe thought he saw a smile in his father’s eyes.

Frank refilled his bowl of Healthy Nut Crunch with fresh milk and took a seat back at the breakfast table with Joe and Mr. Hardy.

“I’m not teasing Frank,” explained Joe, slurping the sweet milk from his bowl of Sugar-O’s. “I’m helping him face his fears.”

“I’m not afraid!” said Frank. But when he looked at his watch and saw that he would be at Bayport Bear Park, along with the other third and fourth graders, in less than an hour, he shivered.

In his nine years, Frank had faced a lot of fears solving mysteries with his younger brother, Joe, and their friends—their dad had even built them a tree house, which served as their official mystery-solving headquarters. But so far, Frank had never faced an actual bear—and he’d hoped he never would. He’d seen a show about bears on TV last year. They were huge, and could smell people, animals, and food from miles away! Not to mention that when they defended themselves, they stood on their back legs and their fur puffed out so they could look extra big!

Suddenly Frank felt a little queasy. “Dad,” he moaned, cradling his stomach with one hand. “I don’t feel so good.”

“Fear of Field Trip,” Joe said, cracking a smile in his brother’s direction.

“Not that Frank is afraid,” said Mrs. Hardy, entering the kitchen. “But you two know that you won’t have to see any real bears at Bear Park, right? It’s just a silly name.” She kissed Frank on the top of his head and handed him a fresh T-shirt, which he swapped for his soggy one right at the table.

“Or is it?” Joe waggled his eyebrows up and down dramatically.

Even Frank had to laugh at his brother’s ridiculous face this time.

“Dad,” Frank said, deciding that it was time for a change of subject. “Do you have any cases for work that you need our help with?”

Fenton Hardy was a private detective, and sometimes he worked with the local Bayport Police Department to help solve crimes. When he needed their help, Mr. Hardy was known to tell Frank and Joe about the cases he worked on; he knew the boys had their own detective club and had solved lots of mysteries of their own.

Mr. Hardy showed his sons the front page of the newspaper he was reading. The headline on the front, in big black letters, read: NY POLICE HUNT FOR JEWEL HEIST ROBBERS!

“A jewel heist!” Joe exclaimed, through a mouthful of Sugar-O’s. “Cool!”

“Do you have any leads?” Frank asked seriously.

“A couple,” said Mr. Hardy. “While you’re on your field trip, I’m going to be at the police station, helping the officers question a suspect.”

“Why don’t you just arrest him?” asked Joe.

“Because first we have to make sure he committed the crime,” said Mr. Hardy. “Remember last year when Joe thought Mrs. Beasley next door stole his bike?”

Frank laughed, his eyes sparkling. “And we found it the next day, in the backyard. Joe forgot he left it there.”

“Honest mistake,” Joe defended himself. “She was acting suspicious.”

“Exactly,” said Mr. Hardy. “But if you’d accused Mrs. Beasley without proof, you’d have looked awfully silly. Same with the jewel heist. Before we arrest someone, we need to have proof he did it, otherwise the real bad guy could get away with robbing that jewelry store.”

Frank thought about this for a minute, then took out a pocket notebook that Aunt Trudy had gotten him. Frank and Joe liked to take notes when they were solving a mystery, and this seemed like a very good first note to make in his notebook. Proof! he wrote.

“You boys better get a move on,” Mrs. Hardy said, pointing at their kitchen clock. “The school bus will be here in ten minutes, and you don’t want to miss your field trip.”

Frank closed his notebook and placed it in his back pocket. He couldn’t help but wonder if missing the field trip was really such a bad thing.

“Watch it, Hardys!” Adam Ackerman, the biggest bully at Bayport Elementary School, pushed past Frank and Joe on his way out of the school bus, stepping on Joe’s toes as he went.

They had just arrived at Bayport Bear Park, and Adam was cutting past everyone to make sure he was the first one off the bus.

“Even I waited my turn,” Cissy Zermeño told Frank and Joe as they climbed down off the school bus. “And I like to be first and best at everything.”

Frank and Joe exchanged a look. No one knew how Cissy liked to be number one better than the Hardys. She always won at everything.

“Okay, everyone,” Ms. Potter, one of the chaperones (and a teacher at Bayport Elementary), called out. “Please follow me into the visitors’ cabin, single file.”

Frank had to admit the park was pretty neat. It was springtime, so everything was green and bright and the birds were singing their chipper songs. After a long winter, it was nice to see leaves on the trees again, and clover-green grass covered the ground. A few picnic tables and grills for cookouts dotted the park. On the outskirts of the property was a thick, sprawling forest with all different kinds of trees.

That must be where the bears live, thought Frank, his heart pounding.

Straight ahead, Ms. Potter led the line of students into a dark-brown log-cabin-type building. In front of it was a wooden sign that said BAYPORT BEAR PARK VISITORS’ CABIN.

Inside the cabin, Joe’s classmates were crowded around something that he couldn’t see.

“Whoa,” said Phil Cohen, one of the Hardys’ best friends. “Look at that!”

“What is it?” asked Joe, inching toward the center of the crowd.

That was when Frank and Joe saw it—a big yellow ball about the size and shape of a watermelon, covered in bumblebees!