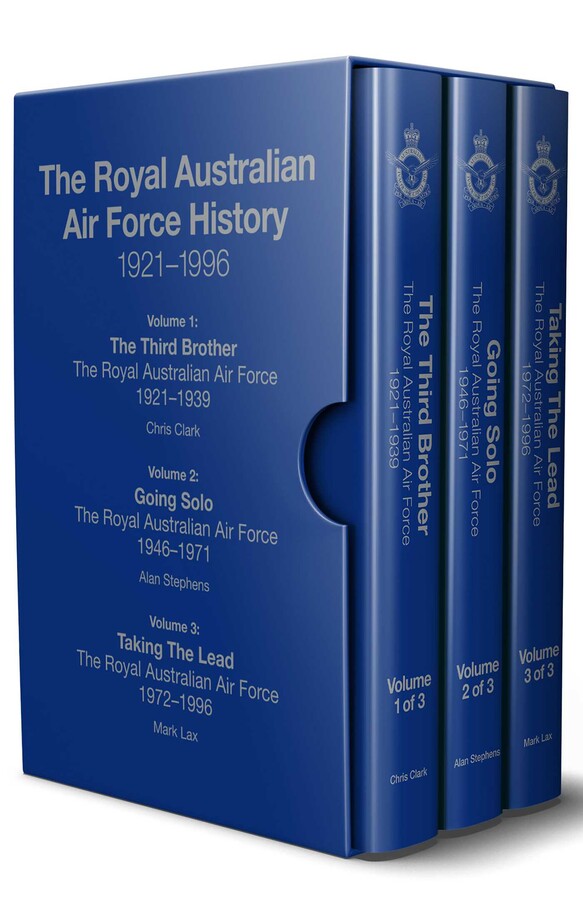 This three-book box set brings together the three official histories produced by the Royal Australian Air Force since 1991, covering three distinct periods of its history since its inception in 1921.

The first of these titles, The Third Brother, was written by Dr Chris Clark and originally published in 1991. It explores the story of the RAAF in its formative inter-war years from 1921 to 1939, clearly articulating the challenges confronted by the fledgling air force in endeavouring to establish itself as the third Service, at times in the face of significant opposition from the other two well-established Services. Dr Clark gives insights into the early workings of the RAAF, including its problems with ‘inadequate equipment and fractured leadership’, as well as how, despite being a small air force ‘far removed from the mainstream of world affairs’ during the period, it was able to establish a strong basis for a fifty-fold expansion in size during World War II.

Going Solo by Dr Alan Stephens is the second title in this set, and picks up the story of the RAAF in the post-World War II years from 1946 to 1971.Originally published in 1995, Going Solo starts with the extraordinary period of mass demobilisation that followed the war. This was a time of government indifference to military service, and of severe reductions in resources. But the combination of Cold War tensions, Australia’s commitments to the conflicts in Korea, Malaya, Indonesia and Vietnam, and the military-technological revolution epitomised by jet aircraft and missiles, dramatically reversed this attitude. Simultaneously, shifts in international politics made it clear that Australia’s defence and foreign policies would have to become more self-reliant. For the RAAF, the great challenge presented by this compelling set of circumstances was to become more disciplined, better educated, and more professional – to use a flying analogy, to “go solo”.

Finally, we have Taking the Lead by Air Commodore (Dr) Mark Lax, which was first published in early 2020. Covering the period 1972 to 1996, Dr Lax takes the reader through the RAAF’s post-Vietnam era and what would be a decade of relative peace globally. The challenges to be faced by the RAAF however would be driven by constant pressures for budgetary, workforce and organisational efficiencies, dictated not only by the government of the time but also internally within Defence and Air Force itself.

The bringing together of these three titles reinforces the underlying messages of resilience and perseverance contained in the Air Force motto, Per ardua ad astra – “through adversity to the stars”, despite both the ongoing and varied challenges faced by the RAAF over the past one hundred years, the Air Force has proven to be the stronger for it and in turn has continued to deliver air power for the people of Australia.

Chris Clark
Alan Stephens
Mark Lax
Dr Mark Lax is presently the Senior Air Force Fellow at the RAAF’s Office of Air Force History. After a 33-year career in the Permanent Air Force retiring as an Air Commodore, Mark continues to serve in the RAAF Reserve and has since competed a PhD in Military History. Canberra based, he now lectures widely and writes on the broad spectrum of RAAF history in this the RAAF’s 100th year.