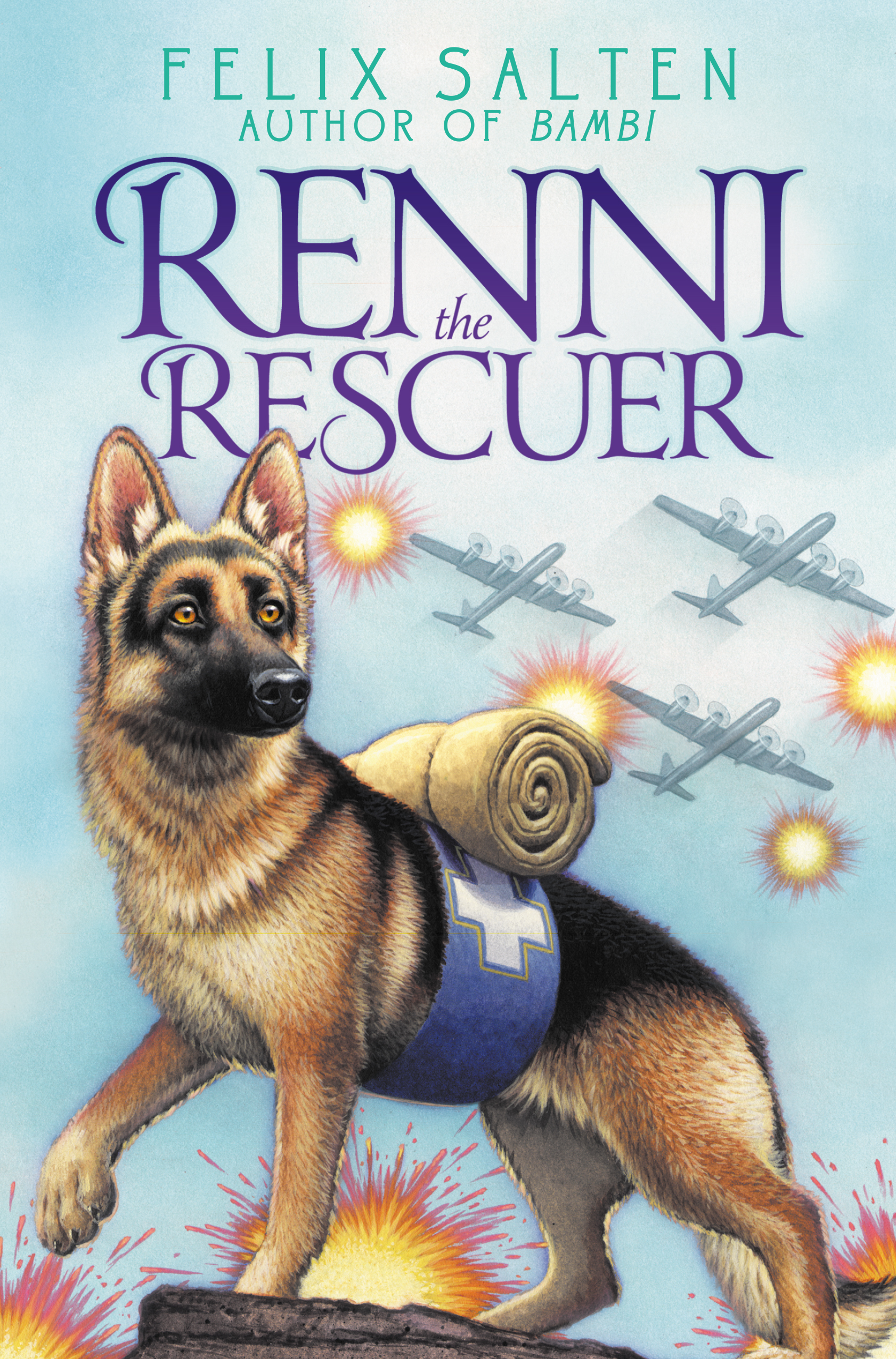 From the author of Bambi, this story of a boy, his dog, and their bravery reaches a new generation of readers with a fresh look.

George has always wanted a dog, so when he picks up small Renni, the runt of a litter of German Shepherd puppies, he immediately falls in love.

Then the war that has been looming finally begins, and Renni and George enlist. They are able to help many soldiers during training camp—but when they are tested in the actual battlefield, can the two friends hold their ground? Or are they unprepared for the trials ahead?

Chapter I
WE SHALL CALL HIM RENNI,” said the man who raised shepherd dogs, as he took the puppy out of the basket, away from his mother. The old dog raised her head a little and followed her small son with a look of patient resignation.

This was good-bye, and she knew it. But she lay down quietly again and went to sleep—or seemed to go to sleep.

It was not for a dog to resist. She knew that, too. She was trustful and obedient.

To be sure, she still had three of the six puppies, out of the litter born a few days ago. Two had already been taken from her and now the third was going.

The three who were left pressed close against their mother as though asleep and dreaming, but drank eagerly. It gave the mother a feeling of comfort and well-being, and more and more the twilight of drowsiness stole over her.

The man went on speaking. “The last one I give away I always call Renni. I got rid of two yesterday so I won’t need to drown any of them. That would be a pity, but I never raise more than three. It keeps the mother in good health and the puppies grow up strong and bright.”

Once upon a time in the days of peace this man Vogg had lived near the Adriatic and had raised fox terriers. But after the first World War the confusion of politics and geography had made him very dissatisfied, for he was beginning to grow old, and in the new order of things he found no order at all. Since he could not accustom himself to surroundings which had become uncongenial he had moved northward and settled in a country which had been spared the alarms of war and had remained unchanged. He did not like changes.

He did not take into account that he had changed his own residence. And the fact that he was now raising shepherd dogs instead of terriers hardly seemed a change. He was still raising dogs, as he had always done. He had a kennel, and so life went on much as it had gone on before.

It was time anyhow to stop breeding fox terriers; there were too many of them. They had become commonplace, ladies’ playthings, almost a kind of toilet article; they were inbred and too apt to go mad. So he began to raise shepherds—more commonly known as “police dogs”—a breed he loved and understood. He could not live without dogs.

“Now, of course, you will have to feed him with a bottle for several weeks,” the man said to George, “and then he may have rice cooked in milk. You must raise him to like vegetables and fruit. Mix a little bone meal with his food, and for the first year go easy with meat.”

George smiled and took the tiny Renni in his arms. A sort of warm, milky fragrance rose from the basket where the mother lay with her children. A healthy dog-smell filled the whole kennel.

“I’m not going to give you his pedigree now,” said the man. “I’ll wait and see how Renni turns out.”

“Why should I have a pedigree?”

George pressed the little brown-black bundle of wool against him and Renni gave a soft whimper. It was a thin and tiny sound, almost like the twittering of a bird. He seemed to be feebly seeking something. George stuck his finger into the puppy’s mouth, and felt the hot, thirsty, eager sucking. It made him happy.

“Don’t forget, his name is Renni,” Vogg called after him.

“Renni, good old Renni,” George kept saying on the way home, and there was a world of love in his tone.

George was a sturdy, good-natured fellow not yet thirty. He lived with his mother in a neat little house in a big garden near the city. The surrounding field was his, too. He raised flowers, cabbages, lettuce, and tomatoes, and sold them on the market.

Now he was going home very, very proud of this helpless creature that belonged to him. He would see to it that this little thing grew up into a noble dog, useful, of service to the world. Yes, indeed, that would be worth while.

His mother laughed when she caught sight of Renni. Mother Marie laughed most of the time. She had a very cheerful disposition and made George’s home life happy.

“Do you want me to raise this youngster?” she asked.

“No!” George had no intention of giving his mother extra work. He would do it all himself and take great pleasure in it, too. He began filling the bottle with warm milk. “Not too hot and not too cool,” warned his mother. “It ought to be just at body heat.”

“Yes,” agreed George, “but at puppy heat.” His face wore a comical expression of superior wisdom as he put the nipple on the bottle.

“I am that,” admitted George, holding the food out to Renni.

Renni tried to stand, sprawled. His thick clumsy legs refused to hold his weight. Collapsed on his stomach, he drank greedily. Mother Marie brought in an old basket lined with rags and soft old cloths. “I wonder if he will sleep in here with Kitty.”

“Why, of course,” George assured her.

“He’s almost too young to know anything. He’s still almost blind. The question is how Kitty will act toward her new bedfellow.”

Kitty was Mother Marie’s young kitten. She was perhaps four weeks older than Renni. They had started calling to her, Kitty! Kitty! and since she had learned to come to this call it seemed perfectly natural to let that be her name. So they never thought of giving her another.

“How would you expect her to act?” George wanted to know. “Kitty hasn’t had any experience yet. It will be perfectly all right with her.”

Mother Marie was doubtful. “What about her inborn hate of dogs, her natural instinct?”

“I don’t believe in any such thing.” George was very positive. “That hate you speak of is just a result of human cruelty. Nothing but thoughtless human cruelty has made cats and dogs hate each other.”

“Well, we can try it,” conceded Mother Marie. She called, “Kitty! Kitty!”

George put the puppy to bed in the basket. Renni had drunk all he could hold. Now he was whimpering softly, not in pain but with a sort of yearning. He moved his head slowly as if it were too heavy to lift.

“He’s missing his mother’s warm body,” said George. “It’s just too bad. And he misses his brothers and sisters.”

“Kitty, where are you?” called Mother Marie. “Of course Mr. Renni must be kept nice and warm. Here, come on, Kitty.”

The kitten, grey and white, tiger-striped, came up mincing daintily, her eyes wide with curiosity, and quite ready for war.

“No nonsense now, and don’t be coy,” commanded Mother Marie. She picked Kitty up from the floor, pressed the soft body against her chin, blew on the silky fur and put her in the basket.

Kitty, arching her back a little, smelled Renni over carefully and curiously. For a moment things hung in the balance. Then she lay down beside him with a graceful sort of movement as much as to say, “This is all right with me.”

Renni had no more than felt her presence there when he cuddled up quite close. He stopped whimpering. He only sighed once or twice, deeply and comfortably. Kitty put one paw caressingly on his neck. She began purring almost at once. They fell asleep side by side.

George nodded his satisfaction. “I knew it! What about that natural instinct now?”
Felix Salten

Felix Salten (1869–1945) was an Austrian author and critic in Vienna. His most famous work is Bambi.