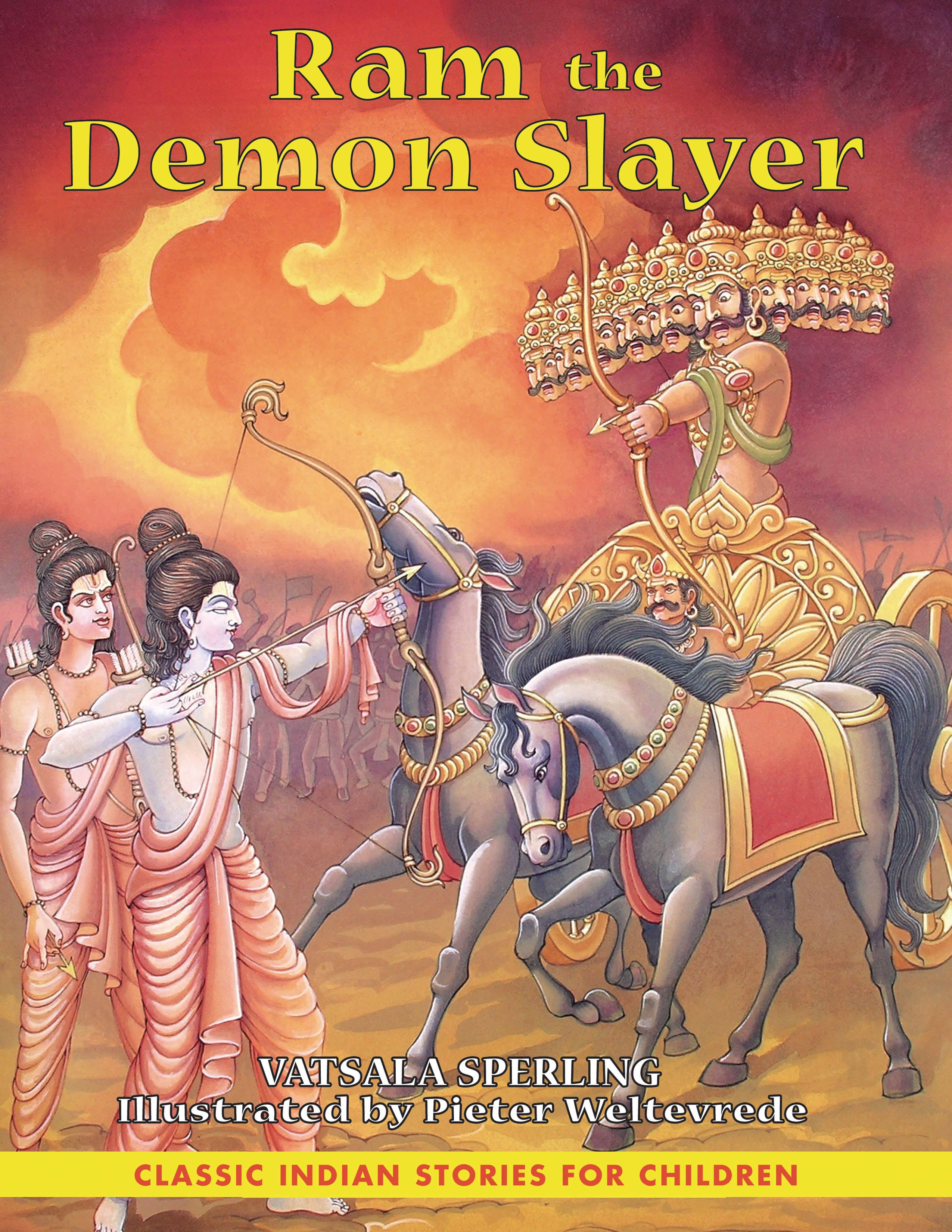 An illustrated version of the classic Hindu epic the Ramayana

Long ago, the story goes, the entire earth was overrun with demons. The ten-headed demon king Ravana had prayed to his grandfather, Lord Brahma, asking that he be granted immortality. And Brahma had granted his wish . . . almost. No god, demon, plant, or animal could harm Ravana, which allowed him to cause considerable damage as he and his demon army ransacked the earth. But Ravana was so scornful of humans he hadn’t bothered to ask for protection from them. This omission would prove to be his downfall.

With cries for help rising from every corner of the earth, the heavenly gods, Lords Brahma, Shiva, and Vishnu, decided that something had to be done to rid the world of the rampaging demons and restore peace and order. They decided that Vishnu should be incarnated upon the earth in the form of the virtuous prince Ram. As a human prince, albeit one who had help from the gods, he would be able to defeat the demon king.

In Ram the Demon Slayer, readers follow Ram from his conception and birth through his training with sages and first successful demon battles to his marriage to the beautiful princess Sita and his final triumphant victory over the demon king. This beautifully illustrated retelling of the Ramayana makes accessible to Western children and their parents one of the favorite heroes of the Hindu tradition.

At the southern tip of India, among the tall and mighty waves of the Indian Ocean, lay nestled the small island country of Lanka. This beautiful island was blessed with azure skies, green forests and golden beaches. But Lanka’s ruler was Ravana, a terrible demon with ten hideous heads, twenty grasping hands, and a mean and greedy spirit. He also happened to be the grandson of the mighty God of Creation, Lord Brahma.

Not content with his many powers, Ravana prayed to Brahma, insisting, “Make me immortal! Let no god or demon, animal or plant harm me!”

Brahma raised his eyebrows and asked, “What about humans?”

Ravana raised a dozen fists and sneered. “They have only two little arms, Grandfather. I have no fear of them.”

So Brahma did as Ravana requested. And things on Earth went from bad to worse, as Ravana and his fellow demons went on one rampage after another. Desperate cries for help could be heard from all corners of the earth. Finally Brahma had had enough. He called on his fellow deity, Lord Vishnu, God of Preservation. Pointing down at Lanka, he said, “What a mess! Since I granted Ravana eternal protection, there’s nothing I can do to stop his cruelty. But, he was arrogant enough to think he would be safe from men. If you go in human form, you will be able to destroy him once and for all.”

One afternoon there came a desperate pounding at the palace door. It was Sage Viswamitra. “We need help! Our forests are overrun with terrible demons!” he cried.

Dasharatha was reluctant to let his sons go, but Ram accepted the challenge calmly, and he and Lakshman followed Sage Viswamitra into the dense and dangerous wood. As they walked, the path grew darker, and the air grew cold and silent. Ram listened for signs of life, but there were none. “O Sage, what has happened here?” he asked gravely.

“You are in the land of the demon Tataka. She has stripped the forest of all living things. The rivers and streams have dried up. Now she eats anyone who passes by.” Then the sage drew a quick, harsh breath. “Watch out,” he hissed in warning. “Here she comes.”

They turned to see a huge, misshapen demon, her crooked fingers red with blood, her dreadful snout hungrily sniffing the air. Quickly, Ram let fly an arrow straight at her heart. With a long howl, she fell across the path. A sigh of relief rose from the floor of the parched forest as the demon died. In the distance, a bird began to sing.

“Well done,” said the sage, breathing his own sigh of relief. “But beware,” he continued. “There are other demons who use trickery and deceit. You will need sacred weapons.”

On their way back to Ayodhya, Sage Viswamitra said they would stop at King Janak’s palace. The sage told them Janak’s story as they walked along the winding trail through the forest. King Janak, like Dasharatha, had longed for a child for many years, One day, around the same time that Ram and Lakshman were born, the king found a golden pitcher buried in his garden. Lying inside was a beautiful baby girl. With heartfelt thanks to Mother Earth, he named the baby Sita, and raised her as his own. Several years later, Lord Shiva, God of All Gods, paid him a visit. Lord Shiva gave the king his own bow and arrow, and told Janak to keep it safe until Sita was old enough to marry. “Let each suitor try his hand. Only Lord Vishnu can lift up this bow and break it in two,” said Shiva. “Vishnu, and no other, will marry your daughter.”

When Sage Viswamitra and the princes entered King Janak’s court, they found him slumped over in despair. “Will my daughter ever find a husband?” the king groaned, as a host of suitors staggered about, complaining and moaning about their unsuccessful attempts to lift the bow. Viswamitra asked Ram to try. Ram approached and bowed humbly, first to the King, then to the sage, and finally to the sacred weapon. Then, with one easy and fluid motion, he picked up the bow, fitted an arrow, and pulled the string. The arrow sped to the sky, and with a resounding crack the bow snapped into two pieces. The other suitors gaped in dumb surprise. King Janak was delighted and relieved. His daughter Sita blushed quietly with happiness as Ram smiled in her direction.

Vatsala Sperling, Ph.D., fluent in a number of Indian languages and Sanskrit, learned these traditional stories at her mother’s feet and enjoys introducing them to children of the Western world. Before marrying and moving to the United States, she was the chief of Clinical Microbiological Services at the largest children’s hospital in India. She is the author of How Ganesh Got His Elephant Head, Ram the Demon Slayer, and Karna: The Greatest Archer in the World. She lives in Vermont with her husband and son.

Pieter Weltevrede began his artistic studies with Harish Johari in 1977 and also studied with Shri Chandra Bal. He lives in Holland with his wife and two children and travels to India annually.

"A welcome introduction for children to a beloved spiritual classic."

"The vivid, three-dimensional illustrations are a delight to behold, and make Ram's fantastic and bold adventures come to life."

"Like Sperling and Weltrevrede's earlier book, How Parvati Won the Heart of Shiva, this book is a must-have for families who crave more than TV programs, action-adventure movies, and video games for their children. This is real literature of an ancient and distinguished culture. The illustrations are splendid."

"This will have a high appeal for children. The illustrations are in color and will catch all readers' attention with their descriptive insights. Listed under folklore, for ages 6 - 9, it is the kind of children's book with a wide appeal."