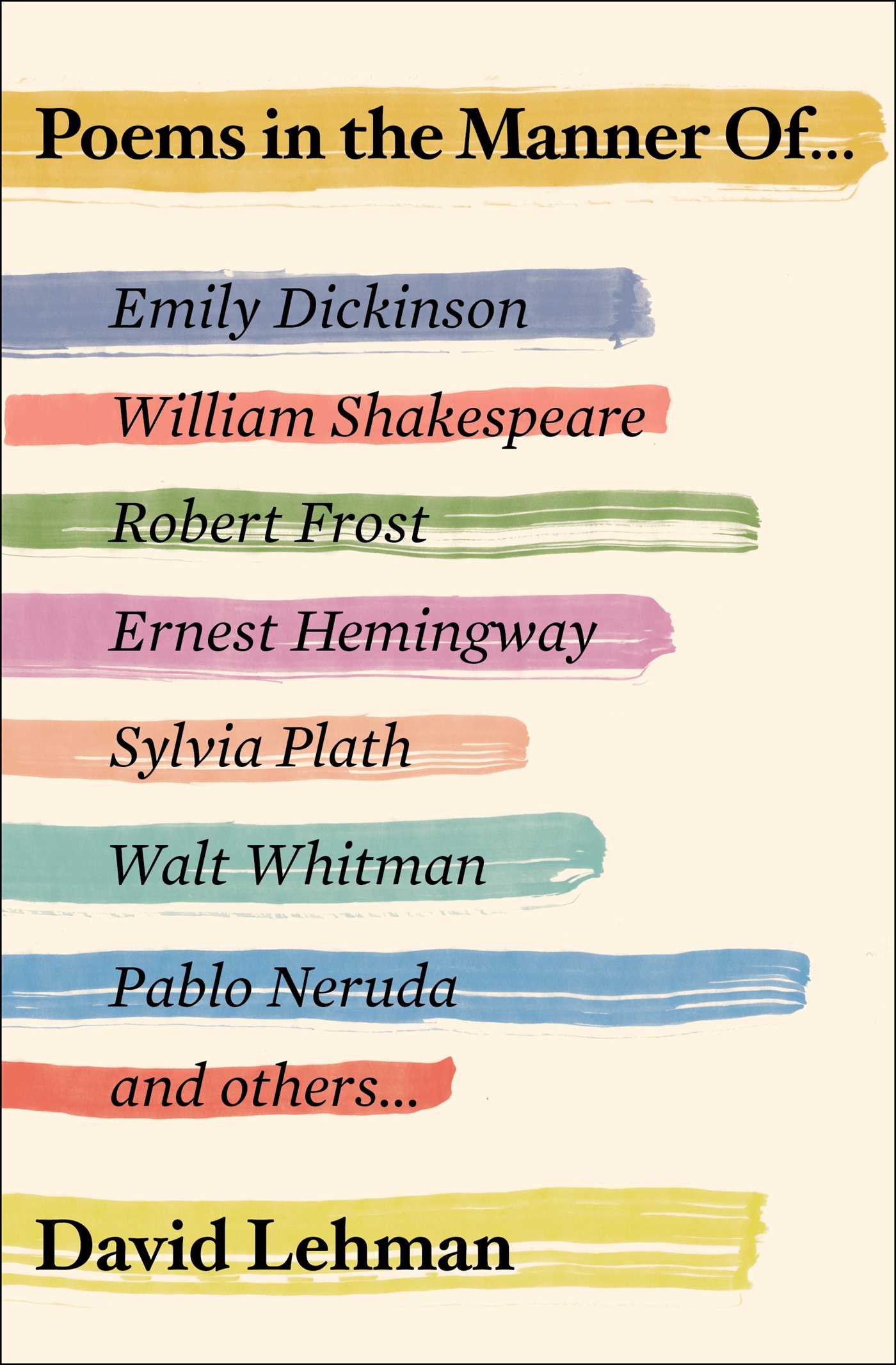 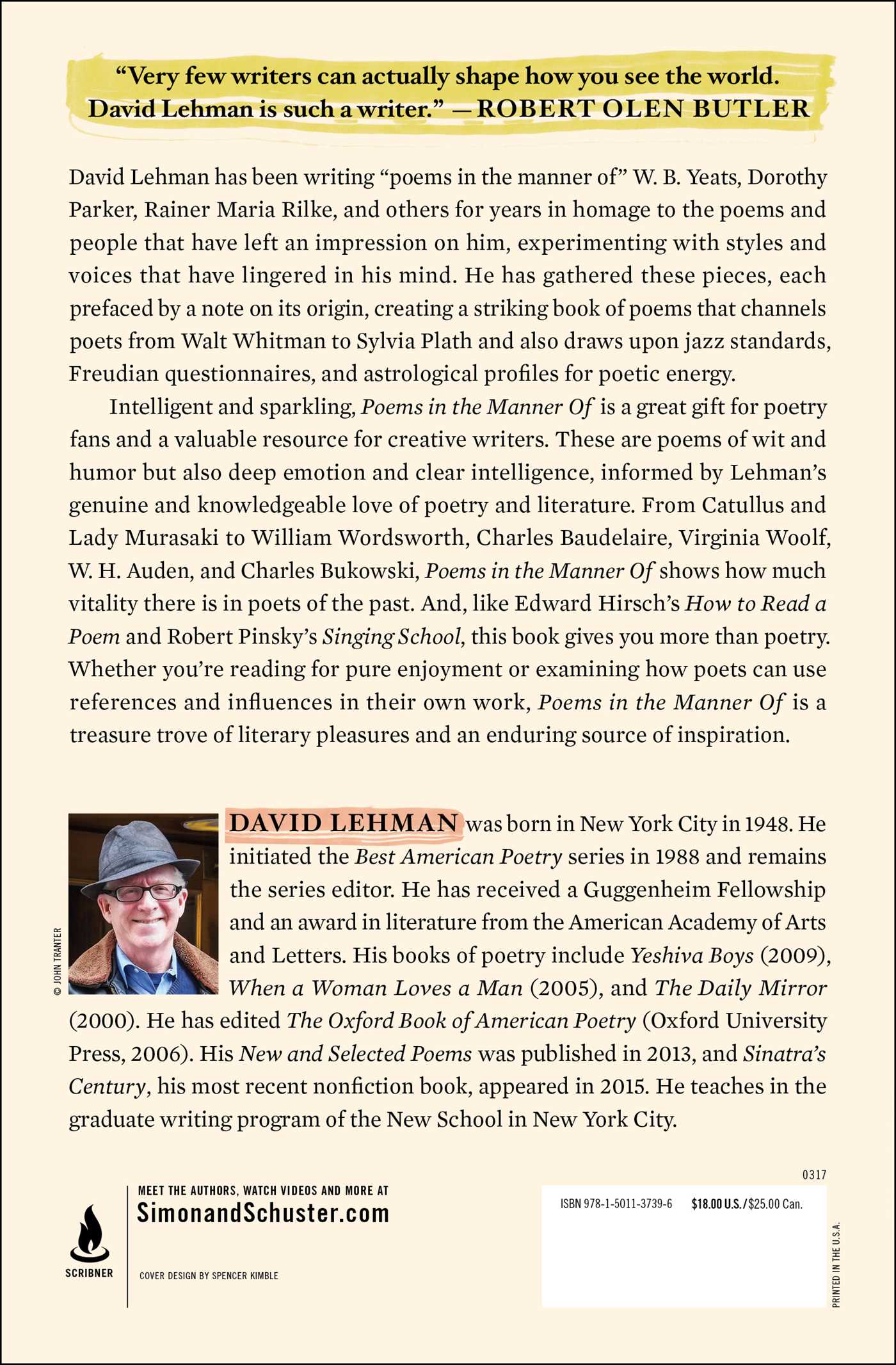 Poems in the Manner Of

Poems in the Manner Of is an illuminating journey through centuries of writers who continue to influence new work today, including that of respected poet and series editor of The Best American Poetry David Lehman.

Lehman has been writing “poems in the manner of” for years, in homage to the poems and people that have left an impression, experimenting with styles and voices that have lingered in his mind. Finally, he has gathered these pieces, creating a striking book of poems that channels poets from Walt Whitman to Sylvia Plath and also calls upon jazz standards, Freudian questionnaires, and astrological profiles for inspiration.

Intelligent and sparkling, this is a great gift for poetry fans and a useful resource for creative writers. These are poems of wit and humor but also deep emotion and clear intelligence, informed by Lehman’s genuine and knowledgeable love of poetry and literature. From Catullus and Lady Murasaki to Wordsworth, Neruda, Virginia Woolf, W.H. Auden, and Charles Bukowski, Poems in the Manner Of shows how much life there is in poets of the past. And like Edward Hirsch’s How to Read a Poem and Robert Pinsky’s Singing School, this book gives you more than poetry. Whether you’re reading for pure enjoyment or examining how a poet can use references and influences in their own work, Poems in the Manner Of is a treasure trove of literary pleasures and food for thought.

Poems in the Manner Of
The unexpurgated Catullus is the most bawdy and profane of poets. He hurls insults with brutal candor and makes the reader feel like doing the same.


Two Poems in the Manner of Catullus
1. To a Critic

You made the mistake of praising my pain,

Flavius. This the connoisseurs of cool,

whose approval you seek and shall never gain,

could not condone. You should have known better.

You joined in the laughter but it felt bitter.

And ever since you have panned

all work of my hand

with the result that I, too, despise you,

and I do not wish you well.

Yet I took no pleasure when I heard Junius tell

Calista your wife had cuckolded you

with her yoga teacher the same week

you faced a tax audit and ate a steak

with a side of fried poison, missed your train

and lost your job. I feel your pain,

Flavius. Not even a shmuck

in February or the face

that is always turned away

from the earth was Diana

a dance major at the High

whose legs were long when

skirts were short, and what

was she doing with you

tried to fuck every girl he met:

how could she fall for your shit?

Though I was born with a stutter,

Junius, I will denounce you yet

and win awards for my oratory

in a full session of parliament 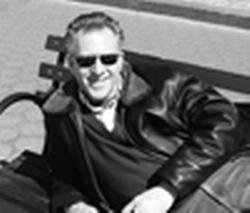 David Lehman, the series editor of The Best American Poetry, is also the editor of The Oxford Book of American Poetry. His eleven books of poetry include Playlist, Poems in the Manner Of, New and Selected Poems, When a Woman Loves a Man, and  The Daily Mirror. The most recent of his many nonfiction books is One Hundred Autobiographies  A Memoir. He lives in New York City and Ithaca, New York.

Praise for New and Selected Poems

“The urbanity of David Lehman is a breath of fresh air. Lehman’s poems can be insouciant, discursive—I associate them with New York School figures like Kenneth Koch, Frank O’Hara and early John Ashbery, but also with the lighter side of Auden. He’s not an earthy poet but a man about town who can see his life in the context of popular culture. . . . Lehman’s New and Selected Poems has the spark of life in it, a mind alive to all kinds of stimuli and a sense of pulse-quickening experience. This is a book I would pay money for.”

“Lehman is a combination of Mark Twain, Charlie Rose and John Le Carre with a little John Donne thrown in.”

“David Lehman is a true literary man…Poems such as “Mother Died Today” mark the development of his style from a more accessible, straightforward poetry with narrative and storytelling, to a more experiment, mashy style of contemporary poetry, often engaging in dialogue with other works of art.”

“There is a generousness of spirit that the poet and the anthologist have in common. As a poet, Mr. Lehman has always been conversational in style, given to seemingly casual aper?u that take on a larger resonance…His poems weave through history, philosophy, sports, love, jazz, New York life, family life, Judaism and poetry.”

“[Lehman’s] lines echo others from Blake, Donne, Frost, Keats, Eliot, Dickinson, the Great American Songbook, and many others, usually not in poems that cite them by name and never to flout his knowledge…His matter is personal, his language common, and his manner surrealist.”

“[New and Selected Poems] places the poems themselves as center stage: they steer an entertaining, zigzag path between nonchalant Jewish-American autobiography and whimsical experiment. Lehman shows a genius for comic one-liners, for the humor at the root of pathos and the pathos inside tragedy.”

“Very few writers can actually shape how you see the world. David Lehman is such a writer.”

“Inventive and often winningly sincere…Lehman is candid as well as ironic—sometimes, both at once. He generates a maniacal, irreverent, fast-thinking range of references to movies, poems, history.”

“Lehman uses many conveyances—including the prose poem, the sestina, and curt rhymes—to travel across the writing life of a poet whose instinctive romanticism is always bracing and tough-minded, brimming with a rare generosity.”

Poems in the Manner Of

SEE ALL
See more by David Lehman
Thank you for signing up, fellow book lover!