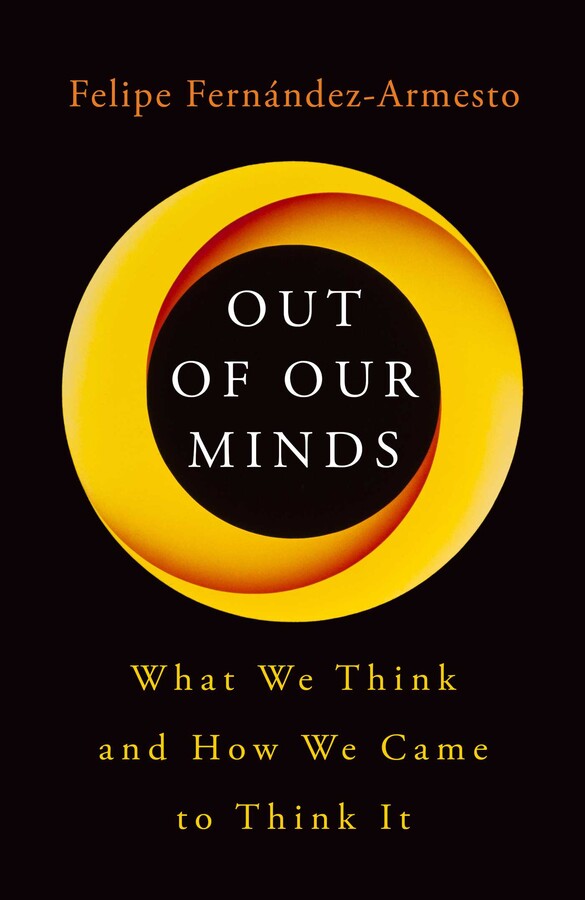 Out of Our Minds

What We Think and How We Came to Think It

‘Immensely learned and ambitious…seam-bursting eclecticism and polymathic brio… This is by any standards a significant book and its author deserves high praise.’

To imagine – to see that which is not there – is the startling ability that has fuelled human development and innovation through the centuries. As a species we stand alone in our remarkable capacity to refashion the world after the pictures in our minds.

Traversing the realms of science, politics, religion, culture, philosophy and history, Felipe Fernández-Armesto reveals the thrilling and disquieting tales of our imaginative leaps. Through groundbreaking insights in cognitive science, he explores how and why we have ideas in the first place, providing a tantalising glimpse into who we are and what we might yet accomplish. Fernández-Armesto shows that bad ideas are often more influential than good ones; that the oldest recoverable thoughts include some of the best; that ideas of Western origin often issued from exchanges with the wider world; and that the pace of innovative thinking is under threat.

‘Immensely learned and ambitious…seam-bursting eclecticism and polymathic brio…This is by any standards a significant book and its author deserves high praise.’

‘It is hard to do justice to the grand sweep of this book and the intriguing detail with which it abounds. If this is a book about ideas, there is one on every other page… brilliantly stimulating.’

‘What we get here is an urbane and civilised observer, broad in his sympathies, mildly distrustful of religion, very distrustful of certainties and enthusiastic about pluralism. You may not always agree with him, but he’s very good company.’

– Evening Standard, Book of the Week

‘He is never less than stimulating. As a product himself of the liberal and sceptical decades of the later 20th century, there is a sense in his writing not of tenacious advocacy but a certain playfulness. All ideas – including his own – are stabs at understanding, part of the process that defines our species, the perennial urge to make sense of the world around us.’

‘A stimulating history of how the imagination interacted with its sibling psychological faculties – emotion, perception and reason – to shape the history of human mental life.’

‘Beginning with cognitive science, this global survey sweeps through leaps of thought from prehistory to today – a journey from unification to uncertainty, lit by minds such as China’s fourth-century-BC master of paradox Hui Shi and paradigm-smashing mathematician Henri Poincaré. Today, Fernández-Armesto argues, the trend is shifting as our homogenized “global culture” threatens the very exchanges that spark heroic ideas.’

‘A bracing account of the central roles imagination, memory and language have played in human development around the world…Fernández-Armesto has the measure of just about everything…studded with pungent apophthegms and mordant aphorisms. Few pages go by without the reader smiling or, occasionally, laughing.’

‘…a triumph. Preternaturally erudite, always intelligible, often witty, Out of Our Minds should be essential reading not just for historians of ideas, but for all readers interested in the human past.’

‘Brilliant and profound, Out of Our Minds is a masterly survey of humanity’s unique imaginative leaps, from hominid cannibalism to our current global convergence. Fernández-Armesto is the leading practitioner of big history, and here he takes on no less than the entire span of human history. Gone are the great men, replaced instead by the ideas – good and bad – that have made us human. Written with his trademark panache and wry humour, this book challenges every assumption you’ve ever had about who we are and where we came from.’

– Jerry Brotton, Professor of Renaissance Studies, Queen Mary University of London, and author of A History of the World in 12 Maps

‘A sparkling account of how imagination and ideas have shaped the strange history of Homo sapiens over more than two hundred thousand years.’

‘With its majestic sweep, this refreshing book covers a great many subjects with considerable authority. Felipe Fernández-Armesto is a gifted writer, guiding the reader through subtleties without failing to illustrate his complex ideas with a telling example.’

Out of Our Minds

What We Think and How We Came to Think It