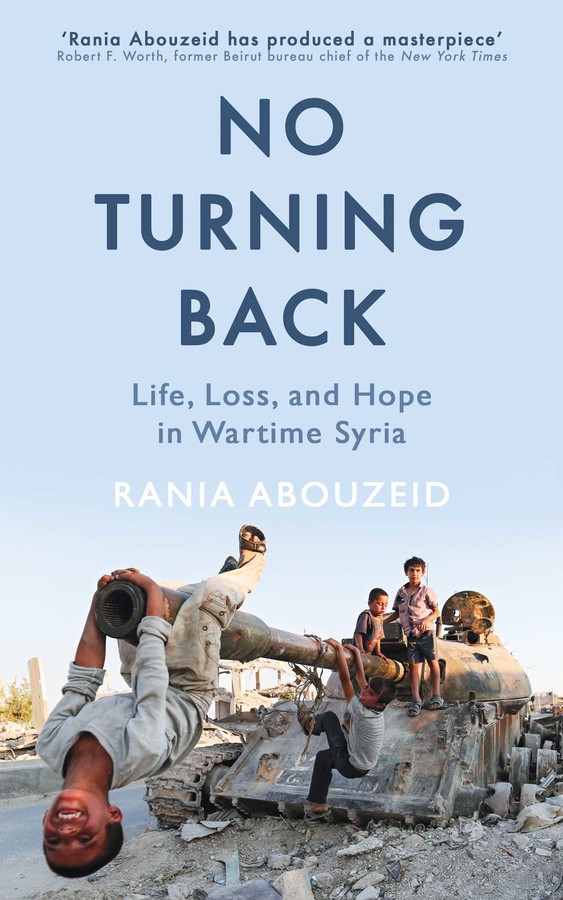 Financial Times Book of the Year

Award-winning journalist Rania Abouzeid presents reportage of unprecedented scope in this engaging, character-driven investigation that exposes the secret dealings that armed and betrayed an uprising.

Taking readers deep into Assad’s prisons, to clandestine meetings and to the highest levels of Islamic militancy, Abouzeid dissects the tangle of ideologies and allegiances that make up the Syrian conflict, and lays bare the tragedy of the Syrian War through the stories of those seeking safety and freedom in a shattered country.

Based on more than five years of frontline reporting, No Turning Back is an utterly engrossing human drama that shows how hope can flourish even amid one of the twenty-first century’s greatest humanitarian disasters.

‘An extraordinary piece of reportage that explains the Syrian war through the stories of individuals caught up in the fighting. Abouzeid’s book has the gripping and tragic qualities of a first-rate novel.’

– Financial Times Book of the Year

'Excellent... Probably the most perceptive journalistic account of the war so far... Abouzeid’s understated bravery and ability to merge into the background speak to the power of immersive eyewitness reporting, foregrounding the experience of the people she meets and writing with modesty.'

'An unparalleled account of the Syrian uprising, drawing on six years of immersive reporting.'

'A stunning take on Syria’s tragedy by the veteran Middle East reporter Rania Abouzeid... Abouzeid’s writing is clear, her analysis sharp, her sympathy deep as she answers this key question of our age.'

‘There is no better way to refocus on Syria than to read Rania Abouzeid’s book… What could simply be a standard journalistic device succeeds triumphantly because of the skill and sensitivity of Abouzeid’s writing, the depth of her reporting and the extraordinary nature of the stories she tells. As a result, her book has the compelling qualities of a novel, rather than simply a work of reportage…an extraordinary book that deserves to be read widely.’

'This is journalism at its very best: brave; personal; written with aching beauty.'

'This narrative of the Syrian war from 2011 through 2016 offers page after page of extraordinary reporting and exquisite prose, rendering its individual subjects with tremendous intimacy.'

‘Offers page after page of extraordinary reporting and many flashes of exquisitely descriptive prose… Abouzeid’s remarkable journalistic and literary work has given us, at last, a book worthy of the enormous tragedy that is Syria.’

‘For those confused by the country's descent into chaos and the myriad factions now battling it out for supremacy, it is indispensable... A masterpiece: a forensic, yet accessible anatomy of how a peaceful uprising was hijacked by external forces who cared less about ridding Syria of dictator Bashar al-Assad than furthering their own agendas… Abouzeid writes compellingly throughout.’

'[No Turning Back] offers page after page of extraordinary reporting and exquisite prose, rendering its individual subjects with tremendous intimacy.'

'Eloquent and devastating … Abouzeid relates the drama of this chaos in gripping prose.'

'Searing and sparingly beautiful… War, she reminds us, alters the architecture of the city as much as it scrambles the human psyche.'

'Rania Abouzeid has produced a masterpiece.'

– Robert F. Worth, author of A Rage For Order

'This is an essential read not only for those interested in Syria and the Middle East, but for anyone who strives to understand the mechanics of a society torn by civil war.'

‘An astonishing work, in its ambition, its scope and its humanity…these stories are woven with consummate skill by Abouzeid who does not moralize and does not judge. Through their lived experiences she has shown the human faces, the human suffering behind the headlines.’

'After No Turning Back, you won’t be able to hear anything more about Syria without feeling that you too know the people who are living (and dying) through it.'

– Barbara Demick, author of Nothing to Envy: Ordinary Lives in North Korea and Logavina Street: Life a

'No Turning Back is a monumental achievement. I can think of few other journalists, past or present, who have reported on any war as courageously, analyzed it as trenchantly, or rendered the lives of its participants and victims as movingly, as Abouzeid has done here for the war in Syria. The book will no doubt endure as a work of literature.'

'No Turning Back works both on the level of deeply reported personal narratives of a tragedy that continues to unspool and also as a major work of history.'

'An intimate portrait of a chaotic war. A must read.'

– Deb Amos, author of Eclipse of the Sunnis: Power, Exile, and Upheaval in the Middle East

'Rania Abouzeid has produced a work of stunning reportage from the very heart of the conflict, daring to go to the most dangerous places in order to get the story.'

‘A fabulous and illuminating account of the Syrian conflict told by a world-class journalist at the height of her powers. This is about real people, their real stories and how they web together to tell the wider story of a nation in crisis. A rich and rewarding book that informs, excites and inspires. A truly first-class piece of high-end reportage.’