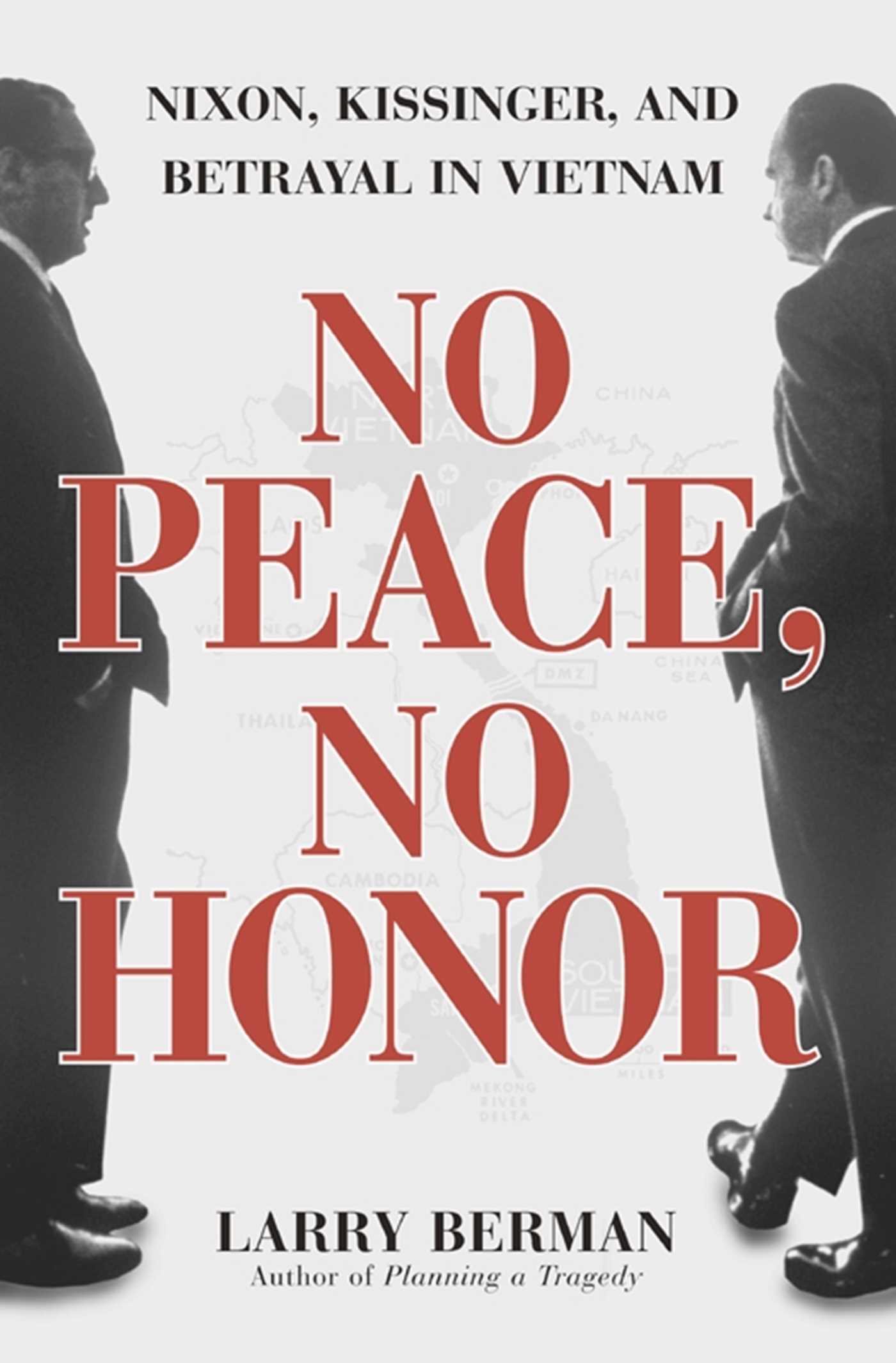 No Peace, No Honor

Nixon, Kissinger, and Betrayal in Vietnam

In 1973, Henry Kissinger shared the Nobel Peace Prize for the secret negotiations that led to the Agreement on Ending the War and Restoring Peace in Vietnam. Nixon famously declared the 1973 agreement to be "peace with honor"; America was disengaging, yet South Vietnam still stood to fight its own war. Kissinger promptly moved to seal up his personal records of the negotiations, arguing that they are private, not government, records, and that he will only allow them to be unsealed after his death.
No Peace, No Honor deploys extraordinary documentary bombshells, including a complete North Vietnamese account of the secret talks, to blow the lid off the true story of the peace process. Neither Nixon and Kissinger's critics, nor their defenders, have guessed at the full truth: the entire peace negotiation was a sham. Nixon did not plan to exit Vietnam, but he knew that in order to continue bombing without a congressional cutoff, he would need a fig leaf. Kissinger negotiated a deal that he and Nixon expected the North to violate. Ironically, their long-maintained spin on what happened next is partially true: only Watergate stopped America from sending the bombers back in.
This revelatory book has many other surprises. Berman produces new evidence that finally proves a long-suspected connection between candidate Nixon in 1968 and the South Vietnamese government. He tells the full story of Operation Duck Hook, a large-scale offensive planned by Nixon as early as 1969 that would have widened the war even to the point of bombing civilian food supplies. He reveals transcripts of candidate George McGovern's attempts to negotiate his own October surprise for 1972, and a seriocomic plan by the CIA to overthrow South Vietnam's President Thieu even as late as 1975. Throughout, with page-turning dialogue provided by official transcriptions and notes, Berman reveals the step-by-step betrayal of South Vietnam that started with a short-circuited negotiations loop, and ended with double-talk, false promises, and outright abandonment.
Berman draws on hundreds of declassified documents, including the notes of Kissinger's aides, phone taps of the Nixon campaign in 1968, and McGovern's own transcripts of his negotiations with North Vietnam. He has been able to double- and triple-check North Vietnamese accounts against American notes of meetings, as well as previously released bits of the record. He has interviewed many key players, including high-level South Vietnamese officials. This definitive account forever and completely rewrites the final chapter of the Vietnam war. Henry Kissinger's Nobel Prize was won at the cost of America's honor.

Seymour M. Hersh author of My Lai 4 This is a study of betrayal -- betrayal of a miltary ally, of a negotiating partner, of the truth....It's a story that needed to be told.

Mark Clodfelter National Defense University The most complete analysis of the Nixon era of the Vietnam War yet written...A must-read for anyone who wants to understand what really occurred during America's conduct of the Vietnam War.

Jack F. Matlock, Jr. The New York Times Book Review In the endless flow of assessments, reassessments, and re-reassessments of the war in Vietnam, a study occasionally appears that goes beyond a rehash of the polemics that have marked that tragic experience. Larry Berman's No Peace, No Honor belongs in that select category.

Mackubin Thomas Owens The Washington Times An excellent account of the diplomacy of the major players in the Vietnam War, as well as the Soviet Union and China.

No Peace, No Honor

Nixon, Kissinger, and Betrayal in Vietnam