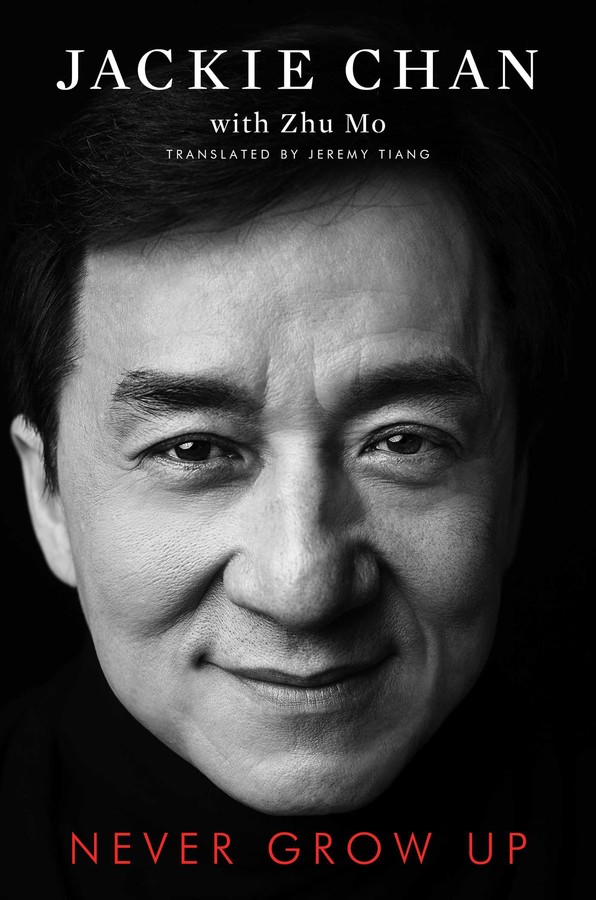 Everyone knows Jackie Chan. Whether it’s from Rush Hour, Shanghai Noon, The Karate Kid, or Kung Fu Panda, Jackie is admired by generations of moviegoers for his acrobatic fighting style, comic timing, and mind-bending stunts. In 2016—after fifty-six years in the industry, over 200 films, and many broken bones—he received an honorary Academy Award for his lifetime achievement in film. But at 64 years-old, Jackie is just getting started.

Now, in Never Grow Up, the global superstar reflects on his early life, including his childhood years at the China Drama Academy (in which he was enrolled at the age of six), his big breaks (and setbacks) in Hong Kong and Hollywood, his numerous brushes with death (both on and off film sets), and his life as a husband and father (which has been, admittedly and regrettably, imperfect).

Jackie has never shied away from his mistakes. Since The Young Master in 1980, Jackie’s films have ended with a bloopers reel in which he stumbles over his lines, misses his mark, or crashes to the ground in a stunt gone south. In Never Grow Up, Jackie applies the same spirit of openness to his life, proving time and time again why he’s beloved the world over: he’s honest, funny, kind, brave beyond reckoning and—after all this time—still young at heart.

Jackie Chan is a martial artist, actor, film director, producer, stuntman, and philanthropist. He has appeared in over 150 films, including Rush Hour, Shanghai Noon, Kung Fu Panda, and The Foreigner.

"The legendary action star gets candid telling his life story – in particular, recounting his many brushes with death both on and off screen. You’ll be hard-pressed to find a Hollywood memoir with this much blood and (broken) bone. Chan’s stories are too fascinating to ignore." —Entertainment Weekly

"Like Chan's best films, his memoir is engaging and entertaining." —Shelf Awareness

"The book is definitively warts (and cracked skulls and broken bones and gallons of blood) and all… but Chan also reveals a soulful, thoughtful side—just one you wouldn't want to mess with." —Kirkus Reviews

"Undeniably fun... winningly upbeat... it provides a heck of a lot of entertainment." —Publishers Weekly

"This is a worthy addition to library collections not only because of Chan’s worldwide fame but also for the value of a non-Western Hollywood success story." —Booklist

"With 200-plus films, an honorary Oscar, and countless mind-blowing stunts to his credit, the martial arts master reflects here on his remarkable acting career. Chan shares how through the ups and downs, he was able to keep his grace, poise, and humility."  —CBS Watch! Magazine

"A legendary life, with many fascinating stories waiting for you to discover." —Jet Li

"I was always a big fan of Jackie and working with him was like a dream come true. His innovative and creative ability was unmatched." —Chris Tucker

"Jackie reminds me to make every summer count and to think with my heart, he leads by example and lights the way." —Adrien Brody

"Working with Jackie Chan is maybe the most fun I've ever had working on movies." —Owen Wilson

"Jackie Chan is one of the great and iconic movie stars of our time." —Jeffrey Katzenberg

"Jackie Chan is my favorite person to duet with." —Kenny G

"If you’re a fan of Jackie and even if you’re not, it’s a great look at the man’s life and the entertainment industry. And he is brutally honest, which is refreshing from someone in his field." —Red Carpet Crash

"The son of Hong Kong is one of the world's biggest film stars, as famous for his comic timing as his martial arts stunts. Here, he reflects, in forthright fashion, on not only his many brushes with death, but also his life off-screen – including cheating on his wife and frequenting gambling dens." —Independent