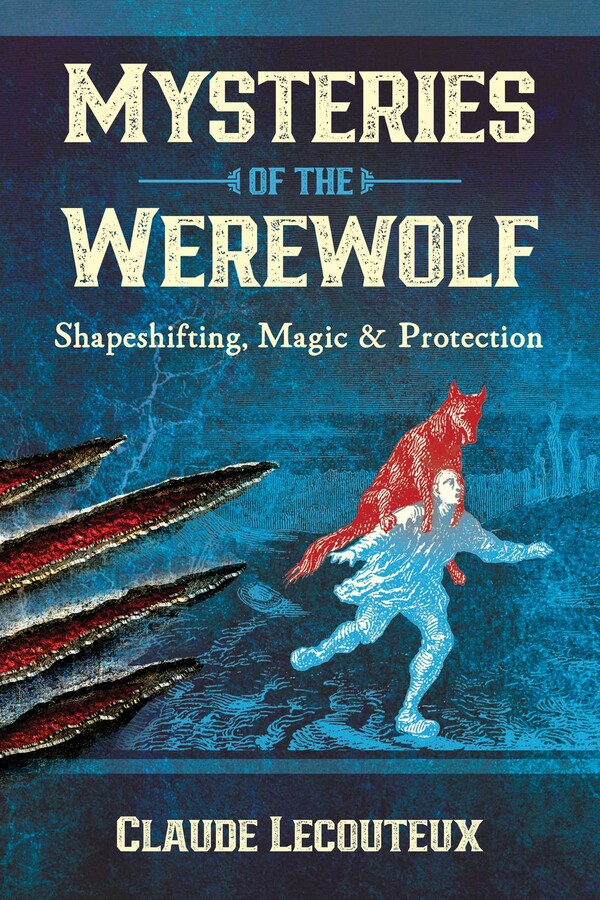 Mysteries of the Werewolf

• Examines werewolf tales and stories from early Greece, Scandinavia, France, Germany, Eastern Europe, China, and Japan, as well as legends of other shapeshifting creatures such as were-tigers, were-jackals, and were-caribou

• Looks at the various ways people become werewolves, including pacts with the devil, magic, and spells, and explores ways to identify, escape, and do away with werewolves

An animal both mythical and real, a terrifying predator and the villain in many a fairytale, the wolf has haunted the human imagination since prehistoric times. Even more disturbing is the possibility that some individuals can change into wolves. These werewolves, or lycanthropes, are able to divest themselves of their human nature and transform into enemies that are all the more dangerous as no one knows who they are. Means of protecting oneself from this beast have been a concern for people since Classical Antiquity, and werewolf legends offer both fascinating tales of horror as well as advice for thwarting these creatures or breaking the werewolf curse.

In this exploration of werewolf folktales, legends, and historical accounts, Claude Lecouteux examines werewolf beliefs and stories from early Greece to the post-medieval age, including the beliefs of the Norse and tales from France, Germany, Eastern Europe, China, and Japan. The author includes the trial records from medieval Europe for individuals who were tried on suspicion of being werewolves and the personal records of people whose spouses could shapeshift into wolves. He investigates the nature of the werewolf, how it can act as the double or lead to out-of-body experiences, and its counterparts in other parts of the world such as were-tigers, were-jackals, and even were-caribou in the Inuit regions of North America. Lecouteux also looks at the various ways people become werewolves, including pacts with the devil and spells, and explores ways to identify, escape, and do away with werewolves. Sharing werewolf mysteries from around the world, Lecouteux shows that by studying the legends of the werewolf we also gain insight into the psyche and ancient imagination of humanity.

From the Introduction
Folklore

Contrary to what you might think, there are very few tales about werewolves. On the other hand the “legends” are many. The bulk of the accounts are memorates setting down the memory of an event. In this sense, the term “legend” is not fitting for we should not make the mistake of dismissing all these tales as pure fiction. They reflect the fears and beliefs of our ancestors as is demonstrated by the trials of werewolves.

Once we have gathered together all the information that can be gleaned from these texts, they give us many details about werewolves. They tell us how a person becomes one and, notably, how a person recovers his or her human form, how to fight them or free them from their condition, for example by burning their skin or by calling them by their baptismal name. As we are in the presence of an extremely lively tradition, the principal motifs vary in accordance to place. While the use of a blessed bullet is a customary method for slaying the monster, here and there is it is specified that said bullet must have been bitten beforehand. It is common knowledge that blood must be made to spill in order for the werewolf to return to his original appearance, and the means used to cause this blood flow go from bladed weapons to farm tools such as scythes, billhooks, and pitchforks. . . .

The history of the werewolf would come under the heading of myth if we define that term according to its accepted meaning in Greek: discourse. But what does the myth tell us, what does it bring back to us? It expresses the feat that the animal component unique to every individual will prevail over his humanity and therefore transform him into an enemy of society. In a first phase, the power of splitting into two individuals, incorrectly called metamorphosis, was denied to the majority of people and only attributed to those individuals who had a relationship with the supernatural: witches, shamans, wizards, or others, then to individuals whose behavior was more or less explicable and in any case was in sharp contrast with that of the community. In the second phase, the transformation became focused on the wolf because it was the most dreaded of all living predators. This was the motive behind the search for the other explanations I cited earlier. The werewolf is therefore first and foremost the image of the anti-human, the expression of unmastered instincts, raw animality, and therefore the very antithesis of the idea of God made in the image of God.

The texts I’ve collected for this anthology are intended to document the history of the werewolf through the ages, and include some excursions far from the European domain when there was justified reason to do so. The majority of the tales are from the French legacy as well as my translations of foreign accounts, unless indicated otherwise. The thematic classification I have used is intended to facilitate the discovery of these strange beliefs, but it is simply a way to present this body of work, for as we should not forget, each text could be listed under several different headings.

From Chapter Two. Diabolical Pacts, Magic, and Evil Spells
9. The Return of the Werewolf

The harvest was being taken in on a flower-covered hill at the edge of the Vistula, and the young folk were dancing. There were kegs of beer and schnapps, because the Elders also wished to be joyful. Suddenly, in the midst of all this celebration, a piercing shriek caused everyone to grow quiet and the music stopped. Everyone stopped dancing and raced over to where the scream seemed to originate. They all then saw a horrible sight: a wolf had seized the most beautiful girl of the village and was carrying her away in his jaws. The young folk set off in hot pursuit and soon caught up to the beast who dropped his prey to the ground and faced them full of rage. Some of them raced back home to get their guns while the other more timorous ones retreated. When the wolf saw this, he picked the girl back up with his jaws and quickly made his way into the forest.

Fifty years later, the young folk of the village were gathering together on the same hill to celebrate. Everyone saw a man, white with age, approaching who beseeched them to allow him to take part in the festivities. He sat down without saying a word and sorrowfully downed the glass of schnapps that somebody handed to him. One of the peasants, who was almost as old as he was, approached the stranger and started up a conversation. The other stared into his face for a longtime then cried out while bursting into tears: “Holy shit, is that you dear Stefan?” The peasant immediately recognized his older brother who had vanished mysteriously fifty years earlier. Everyone crowded around them in amazement, and they learned how he had been changed into a werewolf by an evil witch. He had then abducted the girl during the harvest festival, but she had died of grief after a year of living in the forest. “From that time hence, starving, I would attack every person I saw. Those I caught I would devour, but I could never rid myself of the traces of their blood,” and he showed them his bloodstained hands. For forty years I wandered again in the form of a human. Ah! I wanted to see you again one more time, you and the village where I was born. And now, my dear friends, flee, for I am going to turn into a werewolf like I was before!”

Hardly had these words fallen from his lips when he jumped up, already transforming into a wolf, took off at a triple gallop while emitting a dreadful howl, and vanished forever in the forest.

Mysteries of the Werewolf