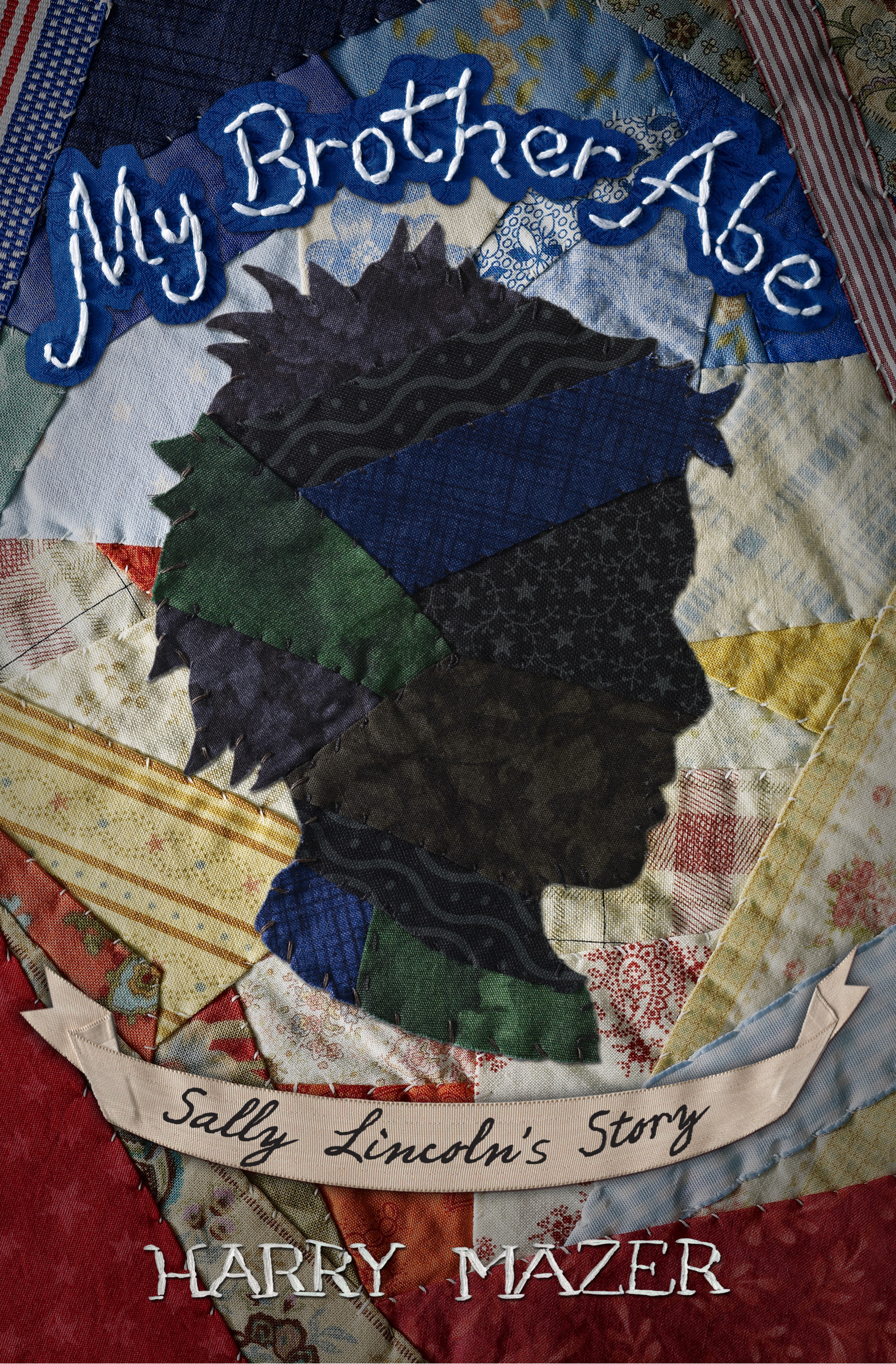 Virtually nothing is known about Sarah Lincoln, Abraham Lincoln's older sister. This novel will follow the few known facts of the Lincoln family's early life, starting with the Lincolns' move from Kentucky to Indiana when Sarah was nine. It will cover their years living in a log cabin, the death of Sarah and Abe's mother when Sarah was eleven and Sarah's new responsibilities as woman of the cabin, and will culminate in the arrival of a stepmother a year later. The details of Sarah's character will be invented, but this novel will give us real insight into Abraham Lincoln's childhood, as well as the role of women on the frontier.

CHAPTER 1
My Little Brother and Me
When he was three years old and I was five, I learned my little brother his letters, the same letters I had learned from my aunt Betsy. I was taking care of him, while Mama was busy. I showed him the letters in the Bible. “Look here, Abe,” I said. “This is an A. This is a B. This is a C. Now you point like I did.”

He did it. He pointed to the letters. I didn’t have to tell him but once. “Now you’re going to make them letters,” I said. I was still a little girl and not speaking perfectly. “Come on outside with me,” I said. There was nothing to write with, so I made the letters in the air. That puzzled Abe some, and he ran off and found some twigs and gave them to me to make the letters on the ground. “Ain’t you smart,” I said admiringly.

Three little twigs made the letter A. I did it, then he did it. Made it perfect the first time. The letter B was harder to make with twigs, so I scratched it in the dirt where the chickens had picked the ground clean. It took him a while to make that B, but he was a dogged little squirt. He wouldn’t give up for nothing. Then we worked on C, and we kept on going, right up the alphabet.

It was funny to watch Abe make the letters, him kneeling on the ground, his butt end up in the air. He’d scratch out a letter with a twig, then talk to it. “D?” he said, creaking it out like an old man who couldn’t hear so good. “You there, you there? E, E, where is E?” He loved his letters. “See C,” he said and laughed at his own joke. S was a snake, he said, and T was a tree. Z gave him some trouble. He kept making it backward. He’d rub it out and do it again, and rub it out and do it again, till he got it right. I learned him to spell his name, too.

Next year, when I was six, Pa signed me up for Mr. Riney’s subscription school. Abe was wild to go too. “I’ll go with Sally. I will. I will go with my sister,” he said, and he wouldn’t stop saying it, not even when Pa said, dang it, he didn’t have the money. “I will go,” Abe said in his little voice. “I will.”

Finally, Pa asked the schoolmaster to visit, and Mama and me showed off Abe, showed how he knew his letters and lots more, too. He could already read everything near as good as me. “He can come along with his sister, then,” the schoolmaster said. “And I won’t charge you extra, Mr. Lincoln, the boy being so young.”

I was pleased to have my little brother’s company going to school. Pa was pleased to save money. And Mama was pleased that Abe and me were going to get schooling. Mama could read and write. She had come from a fine family, and she wanted us to be educated.

We started school, and every day Abe ran ahead of me all the way on his little legs. It was three miles to the school that sat at the Long Branch crossroads. Abe was the youngest in the school, but he could read and do his letters better than most. I was puffed up over him, proud as a pigeon, which was a sin of pride, but I couldn’t help it.

By the time Abe was six, folks were stopping by the house to see the “little wonder”—the child, they said, who could read and write like an angel. They would come with paper for him to write letters for them to family back home in Virginia. Never having had no schooling, most of these people couldn’t read what Abe wrote and most signed their names with marks. Pa was a farmer and a carpenter, he could make anything you wanted, and he could sign his name himself, too. He’d stick out his tongue, bite down on it, and slowly make the letters to write Thomas Lincoln.

Pa’s Knob Creek farm was at the edge of the road. People walked by all times of the day, and the night, too. Carriages and wagons and drovers went past both ways, and sometimes when the long mule trains came through at night, Pa said it was criminal folks, smugglers. I shivered to hear that, but glad that we were all inside and safe.

In case I forgot to tell you, my name is Sarah Lincoln, but anyone who knows me calls me Sally. I was born on February 10, 1807 in Elizabethtown, Kentucky. My brother was born exactly two years and two days after me at Sinking Spring, Pa’s first farm. I don’t remember a whole lot about either of those places.

After Abe, when we were living in Knob Creek, Mama had another boy baby. At that time, I was five and Abe was three. That’s along about the same time I was teaching him his letters. Mama named the new baby Thomas after Pa. Thomas was a fretful little thing. He died when he was six months old. We buried him right there at Knob Creek. On Sundays, Mama went to his grave and I went with her. Mama had a fine singing voice, and each time she’d sing to my littlest baby brother. “Hush, little baby, don’t you cry….” Made me want to cry. I didn’t, though, not much, anyway. Mama always said that we Lincoln women were strong and we didn’t let death nor nothing scorch our eyes.

Did I tell that Abe got his name from Pa’s pa, the first Abraham Lincoln? And that I got mine from Mama’s cousin Sarah Mitchell? Mama loved her like a sister, and if I asked, she would tell me Sarah Mitchell’s story. Something else that made me want to cry. When Sarah Mitchell was nine, she saw her mama cut down by an Indian. Her pa was standing by her mama’s body and attempting to hold off the attackers with a rifle he was using like a club. Sarah and her brother were hiding in the bushes, but they were discovered and ran for their lives.

Whenever Mama got to this part of Sarah Mitchell’s story, I would get all fearful and trembling. Sarah and her brother ran till they came to a log fallen across a river. Sarah’s brother scrambled his way across the log to the other shore and called to her to follow, but she was scared of the water. She hesitated, and the Indians came upon her and took her away.

They held her captive for six years and then they freed her in a prisoner exchange. After that, she went to live with Aunt Betsy and Mama. “And what was that like for Sarah, being with the Indians, Mama?” I would always ask. And Mama would always press her lips together and say, “Sarah vowed they treated her fine, made her part of a family. But I’ll tell you, Sally, it was sweet to see her in our house, and we loved each other. We were like two fingers on the same hand. Sister-cousins people called us. I promised I would name my first girl after her. And so I did.”

“And so you did,” I said, hugging Mama. I couldn’t imagine being anybody but Sally Lincoln. Nor could I imagine living anywhere but Knob Creek. I thought we would never leave it.
Harry Mazer

Harry Mazer is the author of many books for young readers, including Please, Somebody Tell Me Who I Am; My Brother Abe; the Boy at War trilogy; The Wild Kid; The Dog in the Freezer; The Island Keeper; and Snow Bound. His books have won numerous honors, including a Horn Book honor and an American Library Association Best Book for Young Adults citation. Along with his wife, Norma Fox Mazer, Harry received an ALAN award in 2003 for outstanding contribution to adolescent literature. He lives in Montpelier, Vermont.

"Mazer has succesfully imagined a story of the Lincoln children's childhood told from Sally's point of view...this is solid historical fiction, offering a unique and likeable protagonist and a believable recounting of historical events."--The Bulletin of the Center for Children's Books

"Sally...is a smart, strong, and sassy characters, and...it is most succesful as a congenial story of a heastrong young lady's life in the wilderness of early nineteenth-century America."--Kirkus Reviews

"Through such vivid details, Mazer offers an engaging and believable tale of survival."--School Library Journal