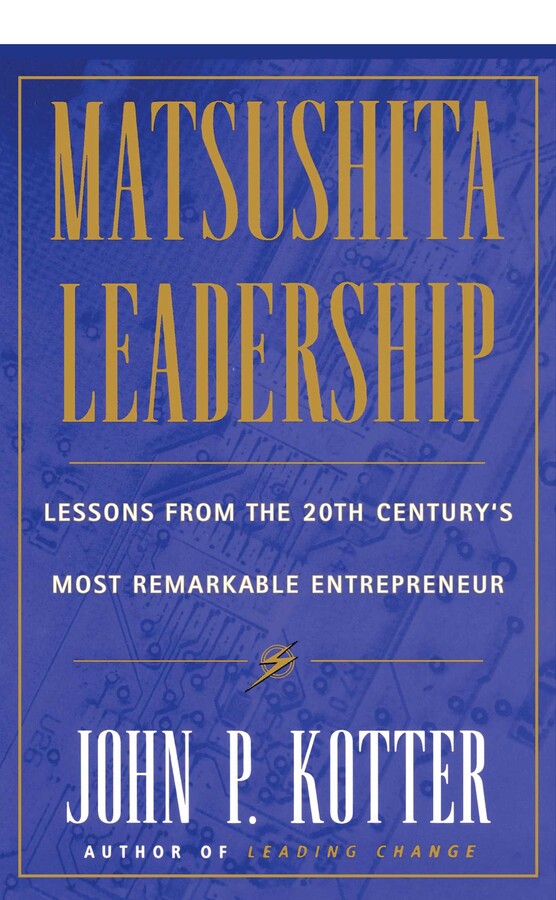 He was one of the most inspirational role models of all time. Thrown into poverty at age four, Konosuke Matsushita (Mat-SOSH-ta) struggled with the early deaths of family members, an apprenticeship which demanded sixteen-hour days at age nine, all the problems associated with starting a business with neither money nor connections, the death of his only son, the Great Depression, the horror of World War II in Japan, and more. Yet John P. Kotter shows in this fascinating and instructive book how, instead of being ground down by these hardships, Matsushita grew to be a fabulously successful entrepreneur and business leader, the founder of Japan's General Electric: the $65 billion a year Matsushita Electric Corporation.

His accomplishments as a leader, author, educator, philanthropist, and management innovator are astonishing, and outshine even Soichiro Honda, J.C. Penney, Sam Walton, and Henry Ford. In this immensely readable book, Kotter relates how Matsushita created a large business, invented management practices that are increasingly being used today, helped lead his country's economic miracle after World War II wrote dozens of books in his latter years, founded a graduate school of leadership, created Japan's version of a Nobel Prize, and gave away hundreds of millions to good causes.

The Matsushita story expands our notion of the possible, even for a sickly youngster who did not have the benefit of a privileged background, education, good looks, or a charismatic presence. It tells us much about leadership, entrepreneurship, a drive for lifelong learning, and their roots. It demonstrates the power of a longterm outlook, idealistic goals, and humility in the face of great success.

Matsushita Leadershipis both a biography and a set of lessons for careers and corporations in the 21st century. An inspirational story and a business primer, the implications are powerful, for organizations and for living a meaningful life.

Discussion Group Questions
1. What personal qualities helped Matsushita most in starting a business and making it successful during its first decade? How did he come to possess these qualities? How unusual do you think this syndrome is for entrepreneurs in general? (See Chapters 2-6)
2. Why did MEI do so well-during the great depression? Why did it bounce back so well after World War II? (See Chapters 7-11)
3. Why didn't MEI succumb to the problems that so often decimate successful corporations? What specifically did Konosuke Matsushita do to help? (See Chapters 12-13)
4. What do you think of KM's late life activities? What kept him going until age ninety-four? (See Chapters 14-16)
5. Evaluate the Epilogue. What do you think is most useful here?
John P. Kotter