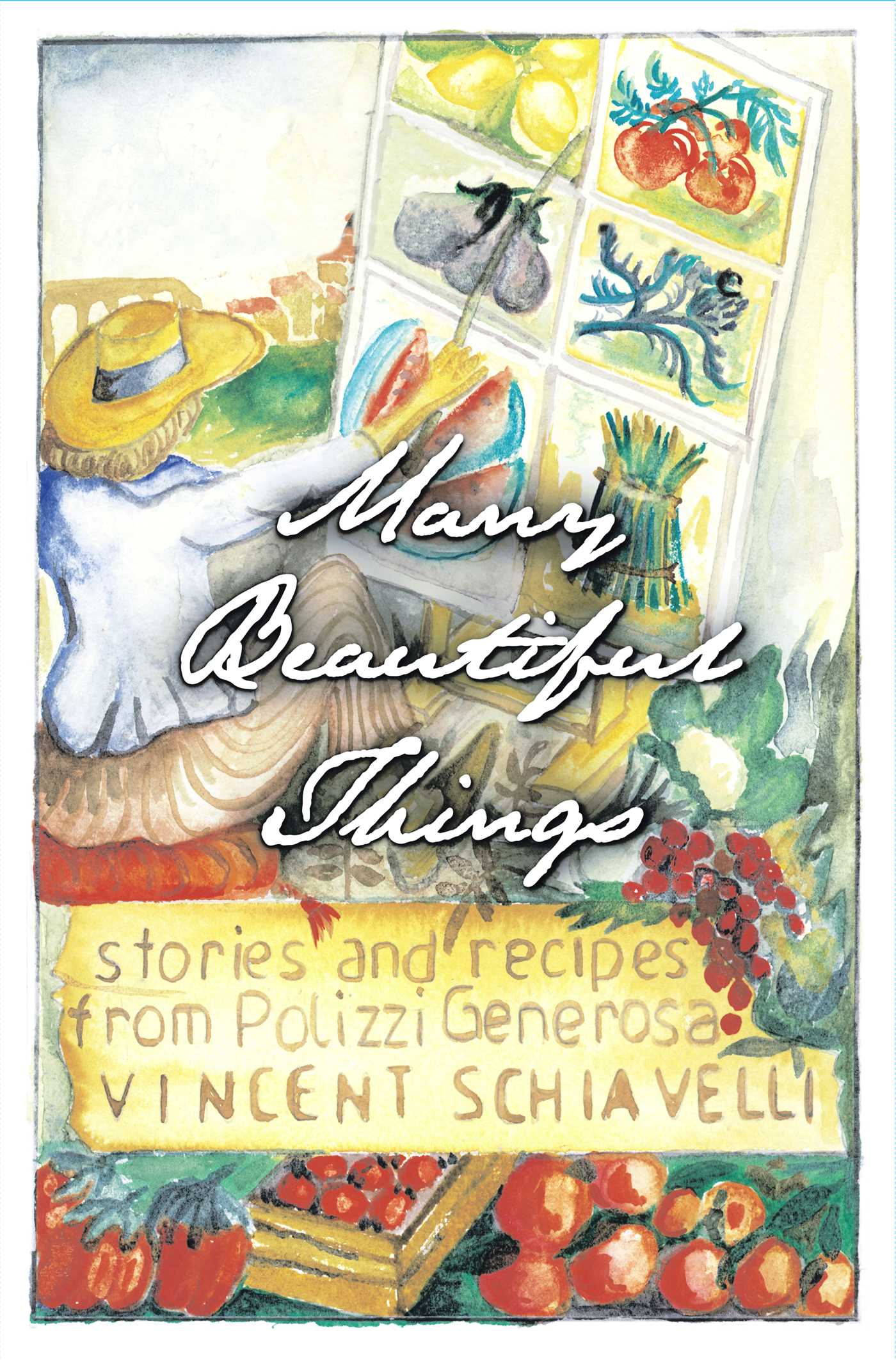 Vincent Schiavelli is known to most of us as a character actor who has appeared in such films as Ghost, Man on the Moon, and One Flew Over the Cuckoo's Nest. Schiavelli grew up in Brooklyn, speaking both Sicilian and English at home. Some of his earliest memories are of sitting at the kitchen table while his grandparents told stories of the life and the people they had left behind in Polizzi Generosa, a small city in the Madonie Mountains of Sicily.
As Schiavelli grew older, those stories, and the city about which they were told, took on a mythic quality. When he was nearly forty he made his first trip there, and what he found was more extraordinary than the "once upon a time" fables of his childhood.
In Many Beautiful Things, Schiavelli invites readers to join him in discovering the people, culture, and food of the city that has, in essence, become his second home. Equal parts memoir and cookbook, it is the best of both. Schiavelli is an accomplished and elegant writer who evokes a foreign and often closed culture from a unique perspective: an outsider fluent in the language with still-strong familial ties.
The recipes -- which reflect the ancient influences of Greece, North Africa, and Spain -- are simple, rustic, and delicious, depending on local products and seasonal bounty. This is not your usual Southern Italian fare but a unique regional cuisine: Pumpkin Caponata, Ditali with Drowned Lettuce, Fried Ricotta Omelet, Potato Gratin with Bay Leaves, Almond Love Bites, Veal Shoulder Roasted with Marsala, and Baked Pasta with Almonds (rigatoni baked in a pork ragu with chopped toasted almonds) are just a few of the extraordinary dishes you'll find in this book, all of which can be reproduced by cooks with delectable results.
Schiavelli provides a comprehensive list of mail-order sources. And if you want to visit Polizzi Generosa, there's a guide on how to get there, where to stay, and where to eat. Illustrated with black-and-white line drawings by Polizzi's best known artist, Santo Lipani (who also happens to be an extraordinary cook), Many Beautiful Things is a feast, both culinary and literary.

Martin Scorsese Vincent Schiavelli is a writer of charm as well as an accomplished actor, but most of all, he and I share the same roots: we're both third-generation Sicilian-Americans whose families came from Polizzi Generosa, and so his book holds a special place in my heart. The stories seem to merge into the recipes and the recipes into the stories, as if memory had a taste and a smell, as if Polizzi's ancient history could be relived through a magic potion that seems to bring back my grandparents and the world they came from, echoes of my childhood, whispers from a mythical past.

Alice Waters I love the spirit of this memoir and cookbook. Vincent Schiavelli understands what is important and delicious about food and life. Many Beautiful Things celebrates the Sicilian table and its connection to the land and local traditions.

Danny DeVito Vincent's new book will not only make you feel Sicilian, it'll have you cooking like one, too.

Flo Baker author of The Simple Art of Perfect Baking and Sweet Miniatures Vincent Schiavelli's sense of history, superb gift for storytelling, and culinary talent are reflected on every page of this engagingly informative book. Baking and cooking from Many Beautiful Things not only transports us to the Italian kitchens of Polizzi Generosa but also inspires us to cherish our own culinary traditions.

Fran Gage author of Bread and Chocolate: My Food Life in & Around San Francisco and A Sweet Quartet Vincent Schiavelli is a master storyteller. Read his endearing tales of discovering his grandparents' birthplace, then head to your kitchen to cook caponatas, stews, almond sweets, and other tantalizing fare.

Victoria Wise author of The Gardeners' Community Cookbook Vincent Schiavelli draws us into the life of his ancestral hometown in Sicily. The stories and illustrations perfectly picture a world that exists somewhere between heaven and earth in Polizzi Generosa. As simple as carrots braised with olive oil, garlic, and capers that come out delectable as savory candy or as complex as baked pasta with almonds for a celebration, the recipes are an expression of how a generous people cook every day.