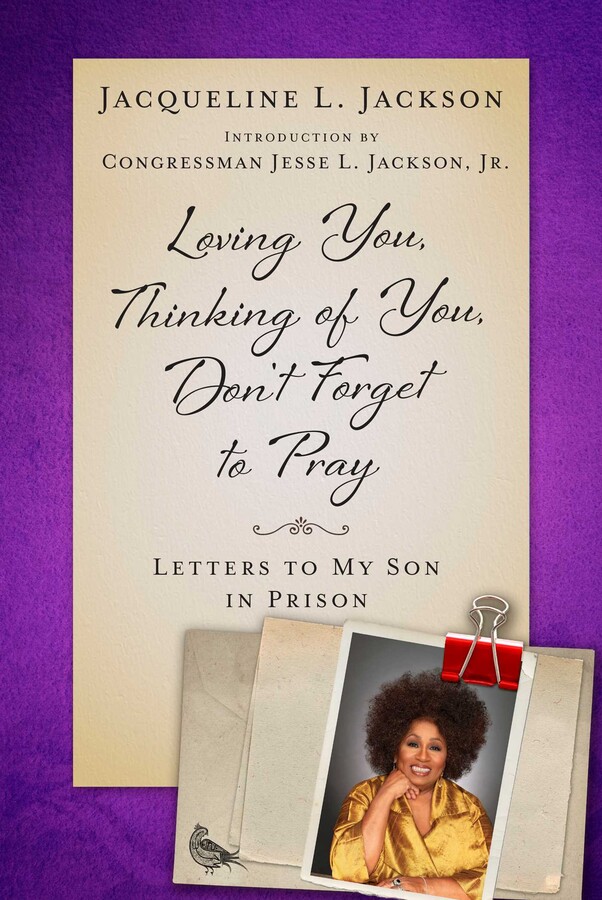 Loving You, Thinking of You, Don't Forget to Pray

Letters to My Son in Prison

From Jacqueline Jackson, wife of Jesse Jackson, role model, and civil rights veteran, comes an inspiring gift of love to a child in his darkest hour—and a lesson to everyone who has been touched by the scourge of mass incarceration.

Jacqueline Jackson promised her son, Congressman Jesse L. Jackson, Jr., that she would write him every day during his incarceration in prison while he served his thirty-month sentence. This book is an inspiring and moving selection of the letters she wrote him.

Together, they comprise a powerful act of love—nurturing and ministering to her son's heart, health, and mind and maintaining his essential connection with home. Frank, anecdotal, imbued with faith, and sometimes humorous, they offer intimate details from the family’s daily life, along with news of friends and the community and glimpses of such figures as Nelson Mandela, Winnie Mandela, and Mayor Marion Barry.

They also touch eloquently on issues of social justice, politics, and history, as when Mrs. Jackson recalls growing up in Jim Crow Florida, and they reflect the qualities, instilled by her own mother, that made her a role model for much of her life.

Ultimately, these letters offer a blueprint for why we have to support our families not just as they elevate but when they fall. This collection is Mrs. Jackson's contribution to healing during a time when our prisons are full and our communities are suffering. She provides the road map for ensuring that the individuals serving sentences understand that prison is where they are, not who they are and for helping them sustain the courage to keep hope alive.

Jacqueline L. Jackson is the wife of civil rights leader Reverend Jesse L. Jackson, Sr. and the mother of five children. She is a committed public servant through the Rainbow PUSH Coalition, a supporter of equality for women, and an advocate for strong family bonds and relationships. The Jackson's have been married for fifty-five years, and they continue to push for equality, justice, and economic empowerment across all color lines. Mrs. Jackson hosts a woman's luncheon at the annual Rainbow PUSH Coalition conference in Chicago, where she invites speakers to address women's issues of the day. She attended the March on Washington for the #MeToo movement and continues to influence thought leaders in her community. This is her first book. She lives in Chicago and Washington, DC.

“Brilliantly simple and deceptively complex. This debut literary work is one of service, love, leadership, and hope.”—Publishers Weekly.

"A powerful act of love. . . . While we wait on reform and seek corrective actions, [Jackson] provides the road map for ensuring that anyone incarcerated understands that prison is where they are, not who they are, and for helping them sustain the courage to Keep Hope Alive!”—Triangle Tribune

“There is power, life and healing in words sent or spoken to those who need them. I was touched by how the unconditional love and sweet forgiveness of this mother went on to bless her son and those around him.”—Jackie Davis, Lockport Journal

"The letters in Loving You consist of some of everything—disappointment, wisdom, humor, strength, encouragement, correction, and a fierce love for her son that only another mother can understand. . . . o one who reads this book will be left untouched."—Marilyn K. Howard, PhD, Columbia Free Press

“In words that moved me to tears and made me laugh, Mrs. Jacqueline Jackson’s love for her son, Congressman Jesse Jackson, Jr., comes through every page. . . . A mother’s love written from the heart inspires us to live each day with grace.”—Donna Brazile, Former Chairman of the Democratic National Committee

“The immeasurable love and grace that Mrs. Jackson exhibits through her letters to her eldest son Jesse is the same love and grace she has shown to young men and women around the country. . . . These letters of love, forgiveness, redemption, and second chances are a must-read. This book is a must-read.”—Minyon Moore, Former Director of White House Political Affairs for President Bill Clinton

“One of the crippling impacts of mass incarceration in this nation is the disconnect that families suffer. And in order for one to recover, whether they are justifiably incarcerated or not, they must keep that connection with their home and with their foundation that can restore them and connect them to their basic life and who they are. For Mrs. Jacqueline Jackson, such a prominent woman, to expose to the world her most intimate and painstaking letters to her son, is an example of how we must fight against our own pain and empower ourselves with an unbreakable connection until one gets home and understands that whether you are fairly or unfairly incarcerated, and whether you sleep behind strange walls or bars, that you always got a home and that connection cannot be broken.”—Reverend Al Sharpton, Founder of the National Action Network (NAN)

“A touching, insightful must-read that serves as an inspiration for many who have walked the path—'whether in a camp, behind the fence, or in the special housing unit’—and for their loved ones who experience the trauma and separation that comes with incarceration . . . This beautiful compilation of love letters filled with wisdom, humor, and insight warms the soul and reminds us of the healing power of the unbreakable bond between mother and son.”—Georgette “Gigi” Dixon, SVP, Director of Strategic Partnerships Wells Fargo & Company

“I have known the Jackson family for over fifty years, but after reading Jackie Jackson’s amazing letters to her incarcerated son I’m convinced I never really knew her. I see the unconditional love of a mother writing to her son virtually every day. . . . What a woman! What a read!”—Frank E. Watkins, National Political Director, Rainbow Coalition

“My mother, through her letters, sustained me through my darkest hour. She reminded me of the power of love, the power of mercy, and the power of forgiveness.
“She helped correct my path, and put me on the road to redemption.
“She saved me. By saving one person, she taught me that the nation could be saved as well.”—Congressman Jesse L. Jackson, Jr.

Loving You, Thinking of You, Don't Forget to Pray

Letters to My Son in Prison