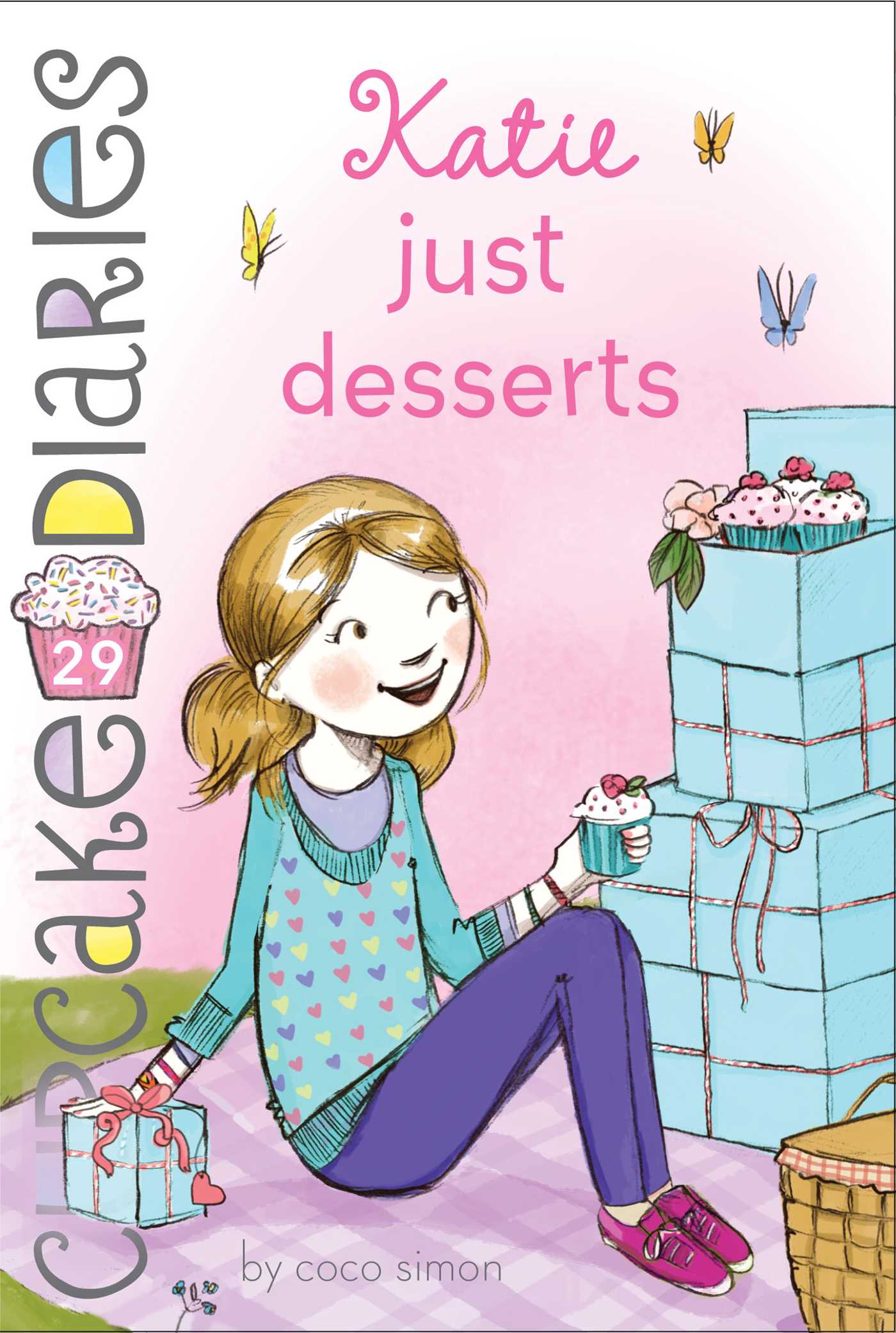 Katie finally meets her father in the latest addition to the Cupcake Diaries series.

Katie hasn’t seen her father since she was a baby. After so many years apart, her father is trying to make the reunion a happy one, but Katie has a lot of unresolved feelings—and questions. At the same time Katie is trying to come to grips with her biological dad, her mom’s boyfriend tells Katie a secret—he’s going to propose to her mom! Will Katie be able to handle all of the big changes in her life?

CHAPTER 1 S’More Surprises
Steady, Mia,” I told one of my best friends.

That’s because Mia Vélaz-Cruz was using a blowtorch, which is unusual for Mia since she’s more likely to be holding a makeup brush or a sketch pencil or a sewing needle. She’s very creative and artistic. And that’s what she was using the blowtorch for—to make art. Out of cake frosting.

The community college near our town, Maple Grove, had announced a baking contest a few weeks ago for kids ages ten to seventeen. You had to first send in a recipe for a cake, and if your recipe was chosen, you were invited to the college to bake your cake in their kitchens in the final contest round.

As soon as Mia and I heard about the contest, we knew we wanted to enter. We’re part of a cupcake baking business with our friends Alexis Becker and Emma Taylor called the Cupcake Club. Emma knew she had a modeling gig the day of the contest, and Alexis had a school business club fair she was helping to run, so Mia and I entered together.

Each baker was allowed one helper, and Mia and I agreed that I should bake and she should help. We’re a good team that way. I am food obsessed, so I’m good at coming up with recipes. And Mia can make any food look mouthwateringly delicious.

So, the recipe I came up with was a s’mores cake—a chocolate cake with layers of fudge and crumbled graham crackers in between. But the best part of the cake was the marshmallow frosting, which would top the cake with soft, fluffy peaks and then be browned with a blowtorch for that toasted marshmallow taste.

When Mia and I submitted the recipe, we hadn’t thought too much about the blowtorch part. It looked easy when chefs used them on TV. But in real life, a blowtorch is kind of scary.

Luckily, monitors from the college were walking around the kitchens, making sure none of us kids were hurting ourselves with knives or stoves—or blowtorches. One of them rushed over quickly when he saw Mia holding the blowtorch.

“Do you know how to use that?” he asked.

“My stepdad, Eddie, showed me how,” Mia replied. “He said it’s the wimpiest blowtorch he could find, and I just have to twist it a tiny bit to let the flame come out. Like this.”

Mia twisted the end, and a small flame burst from the torch.

As he looked on, Mia carefully burned the tips of the marshmallow peaks so they turned a toasty brown color. Soon, our kitchen smelled just like a campfire!

“That’s perfect, Mia!” I cried, clapping, and I saw the monitor smile.

An announcement came over the loudspeaker. “Five minutes until judging!”

I looked around our kitchen area. The college had a teaching kitchen for their cooking students. We each had a stainless-steel table as a work area, and an oven. Right now, our table was strewn with flour, powdered chocolate, and some spilled egg whites.

“I’ll clean this up,” I said. “Mia, just make the cake look as beautiful as possible!”

“You got it,” Mia replied. “Katie, it already looks and smells awesome. I think we could win.”

As I straightened up, I glanced at the competition. Nine other contestants had made it to the finals. A few of the kids looked younger than Mia and I, who are in middle school. Most of the kids looked like they were in high school. And I had to admit, some of the cakes looked amazing. This one girl had a white layer cake with these beautiful flowers and butterflies made out of fondant, a paste made out of sugar, all over it.

“I don’t know,” I said. “Some of the cakes out there look incredible.”

“Well, I think it all comes down to a matter of personal taste with these things, sometimes,” Mia said. “Who are the judges, again?”

“There are five judges,” I told her. “Two are professors here at the college, and then they got three food experts from the community. That’s what the entry form said. I didn’t read it too carefully.”

I’m not exactly what you’d call a detail-oriented person. I knew that I had to make an amazing cake and that the prize was five hundred dollars. That’s all I needed to know, right?

I noticed that I was nervously tapping my purple sneaker on the floor. I took a deep breath. This was it! We had baked our hearts out. I knew my cake was delicious. And thanks to Mia, it was beautiful. There was nothing left to do but wait to be judged.

I glanced at my station. The stainless steel gleamed brightly, and the cake looked perfect on a black pedestal cake stand. There wasn’t a stray crumb or fleck of icing anywhere.

Mia looked around. “Do you think this is what it will be like when you go to cooking school?”

“I guess,” I said. (Mia and I have a dream: After high school, we would both go to school in Manhattan. I would train to be a chef at one of the big cooking schools in New York, and Mia would go to one of the fashion schools there.) “This is a pretty nice kitchen. I don’t know if the school in New York will be fancier than this.”

“This is good practice, anyway,” Mia said. “We should enter the contest every year.”

Then we heard another announcement. “Let the judging begin!”

A bunch of judges wearing white chef’s coats entered the kitchen. A woman with a blond ponytail approached our table first. She was smiling and looked nice, so I relaxed a little—just a little.

“?‘S’mores Cake,’?” she said, reading aloud from the recipe card posted at our station. “What a clever idea. I was a Girl Scout, you know.”

Mia nudged me, and we were both thinking the same thing. We had definitely won this judge over!

She carefully cut a thin slice of cake, put it on a plate, and took a bite.

“Very moist,” she said. “The cookie crumble adds some nice texture. And the toasted marshmallow is wonderful.”

“Thank you!” Mia and I said together, and I felt like I was beaming from head to toe.

The next judge was a short woman who wore her brown hair in a bun. She didn’t smile at us. She read the recipe card and then tasted the cake. She nodded, put down the plate, and then started writing in a little pad. She didn’t say a word to us!

“Oh boy,” Mia said as the second judge walked away. “Does that mean she didn’t like it?”

“I’m not sure,” I whispered back. “Maybe that’s just her judging style.”

The next judge who walked up was a tall guy with dark hair. He looked vaguely familiar. And then I noticed his name tag: MARC DONALD BROWN.

That’s when the whole world froze around me.

Marc Donald Brown is my dad.

My dad, who left my mom and me when I was really little.

My dad, who moved back to New Jersey recently with a whole new family.

My dad, who e-mailed me saying he wanted to meet me, but I turned him down. I wasn’t ready.

And here he was, judging my cake.

Marc Donald Brown was smiling when he came to the table. Then he looked at me. I was wearing a name tag too: KATIE BROWN.

Marc Donald Brown got a weird look on his face. We both stared at each other.

Then my legs took on a life of their own. Some primal instinct took over and I ran. I ran as fast as I could out of that room, and I didn’t look back.

From cupcakes to ice cream and donuts! Having written over thirty books about middle school girls and cupcakes and ice cream, Coco Simon decided it was time for a change; so she’s switched her focus from cupcakes to her third favorite sweet treat: donuts! When she’s not daydreaming about yummy snacks, Coco edits children’s books and has written close to one hundred books for children, tweens, and young adults, which is a lot less than the number of cupcakes, ice cream cones, and donuts she’s eaten. She is the author of the Cupcake Diaries, the Sprinkle Sundays, and the Donut Dreams series.