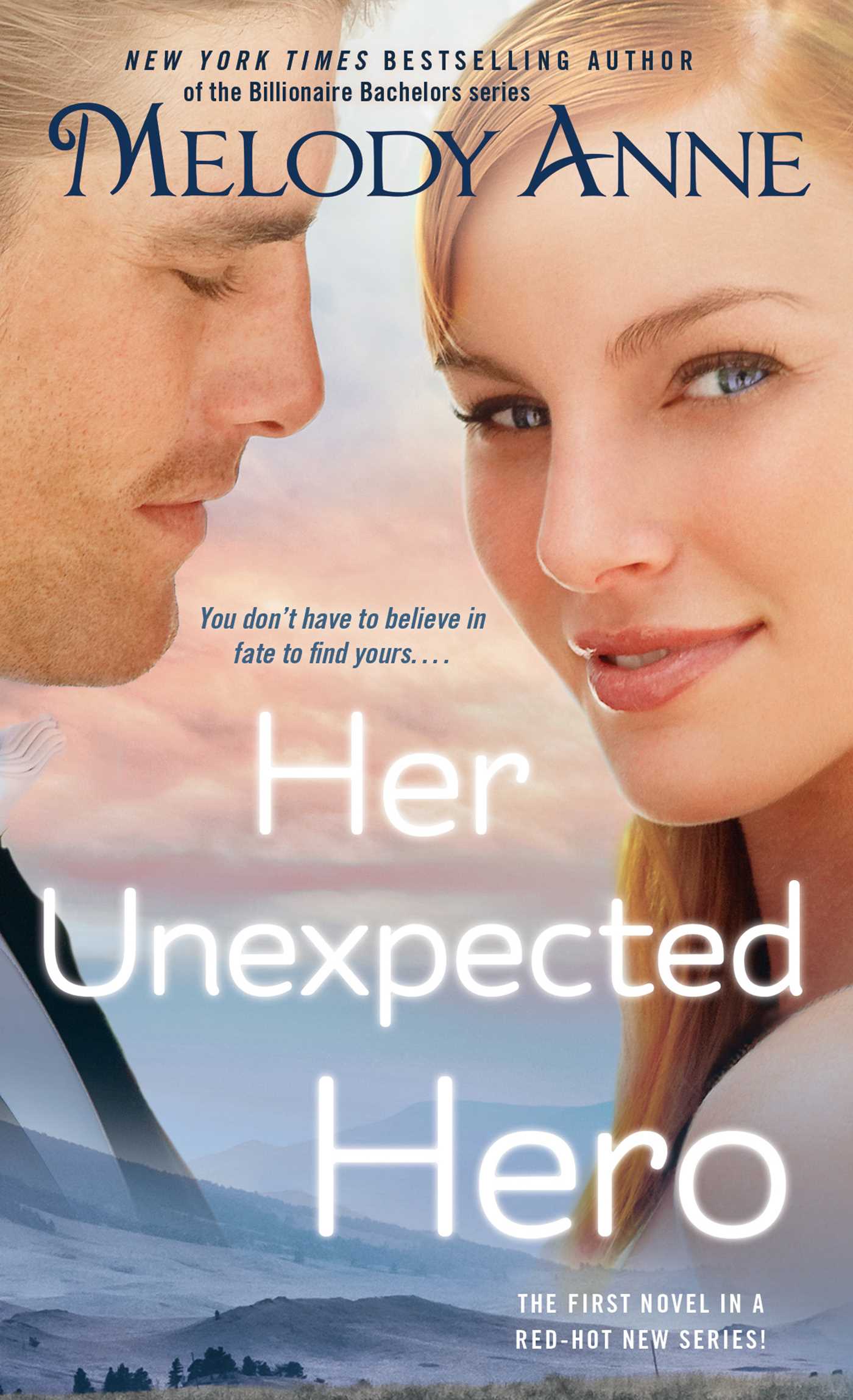 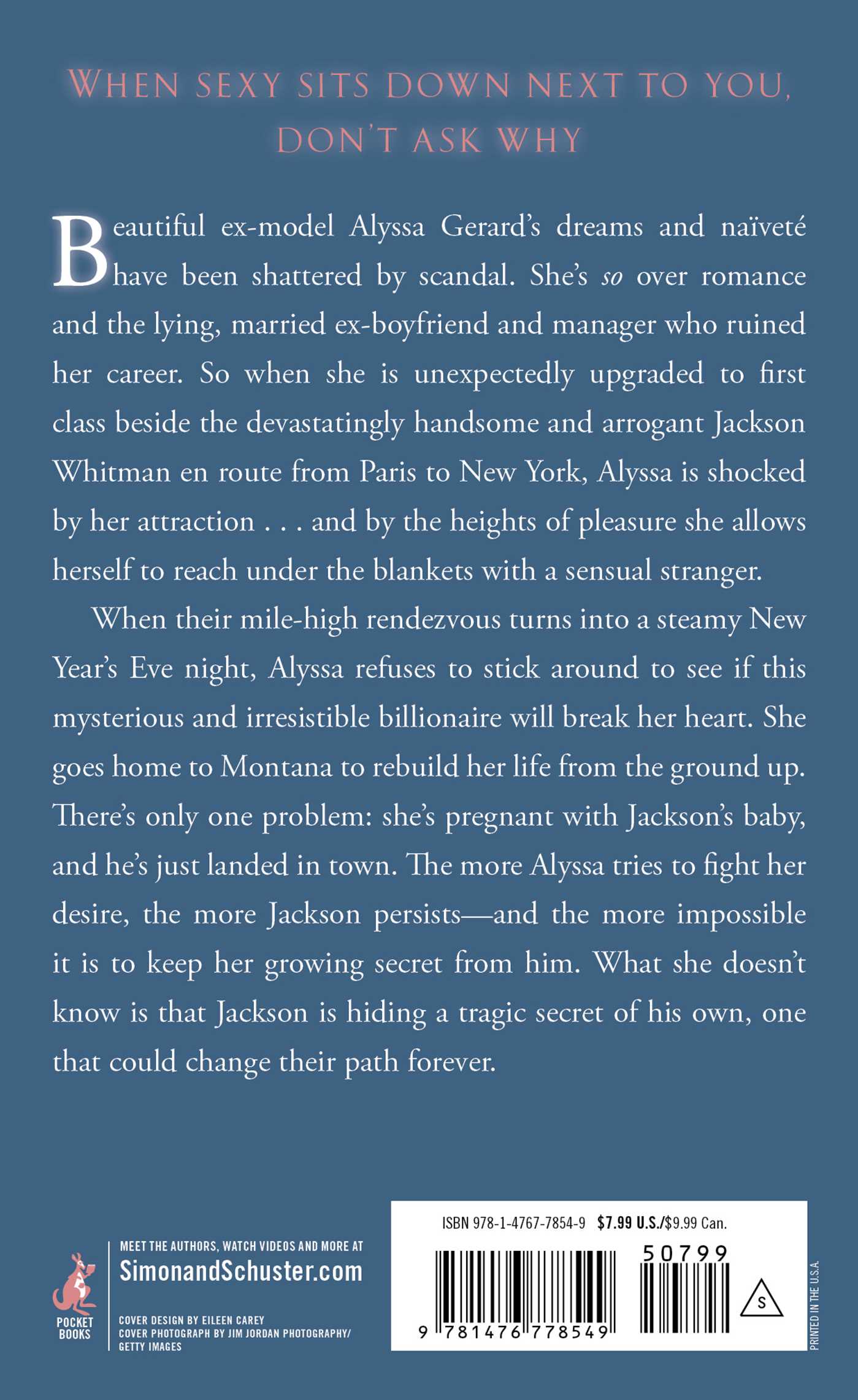 Would you recognize true love if it sat down next to you? In this unforgettable new spinoff of the Billionaire books from New York Times bestselling indie author Melody Anne, two strangers must look past their painful memories to make way for everlasting love.

Alyssa’s modeling career came to an abrupt end when her manager boyfriend emptied her bank account and ruined her professional reputation. Now she’s heading to a new town in Montana to rebuild her life—if she can even get there (stupid delayed planes!). But things are looking up when she's upgraded to first class and a mysterious stranger sits down next to her…

Jackson Whitman doesn’t believe in love, or commitment, or forever—not since he lost his wife and daughter. But the beautiful woman sitting next to him at the gate has him rethinking that position. Can he convince her to be his for the night? Or will she convince him to be hers for a lifetime?

But Alyssa’s mother kept on saying all the usual motherly things, full of worry and false cheer, not offering her daughter even the remotest chance of interrupting. Alyssa Gerard held her phone wearily against her ear. She had no more words to say, nothing that would make this nightmare end. A nine-hour flight was still ahead of her, then one connection, and she’d be home.

Or maybe not. Alyssa had waited in the crowded airport as her “on-time” flight was delayed again and again. It was already midafternoon, and she’d been in this boarding area for hours. Were there any other flights with open seats?

Not on this day of the year, New Year’s Eve. She could either wait for her original flight, or give up—which wasn’t going to happen. She was more than done with Paris, done with modeling, and done with people in general. This week had started out badly and kept on getting worse.

“. . . and I know you’ll really love it in Sterling . . .” Yes, her mom was still speaking, and yes, she should listen, but as she looked around at all the people in bright colors with what seemed like permanent smiles on their faces, she grew even grumpier and simply couldn’t force herself to respond. Not that she needed to, as her mom was speaking enough for both of them. Alyssa should be happy, should feel like celebrating, but instead she was fighting tears.

It was all over—everything had ended so much more speedily than it had begun. She’d set out at the tender age of fifteen, ready to change the world with all the millions she’d make, to see her name in lights, or at least to see her face on every magazine cover ever to grace store shelves and racks.

She’d gotten her dream . . . for a while. And then—poof!—it was gone. Her body tensed in anger as she found herself wedged between two large men who surely hadn’t bathed in eons.

Her mother continued to yammer away, though Alyssa was long past listening.

Shaking her head, she took a deep breath. To her left, a heated debate had broken out between a man in a dark blue suit and an attractive blonde. The exchange flung her back into her own head as she was forced to think about what had happened between her and her ex.

Her “trustworthy” manager, who’d also happened to be her boyfriend, had taken it all—he’d run away not only with her fortune but with her hopes and dreams and reputation. Now she was stuck in Paris on New Year’s Eve, and all she could think about was how badly she wanted to be home, where she could lick her wounds in peace.

“. . . your father and I are so excited to have you home. I only wish you’d been here last week. It was our first Christmas with snow . . .”

To top everything off with a nice, fat cherry, her parents had decided to move out of the thriving Texas town she’d grown up in and hare off to the backwoods of Montana, settling in a place she had never heard of before—Sterling. Her mother swore up and down they’d visited an aunt there several times when she was a kid, but the place must be awful because she couldn’t even remember it.

Great! Just great. She had to go home with her tail tucked between her legs, and it wasn’t even home. They had snow in Montana? Lots of snow? Like the sort of snow that buried people alive, and they weren’t found again until months later, when the spring came and the roads finally cleared? She had a feeling she was going to be one of those unsuspecting victims—huddled in the fetal position as she froze to death in her car.

That is, if she was lucky enough to find a car she could afford.

Alyssa had heard some of this before. She still wasn’t interested in living in Montana, not that she had a choice. She’d never thought she’d want that twenty-year-old Toyota so badly, but she was praying now that it had made the journey with her parents when they’d trekked north for her father’s new job. Alyssa didn’t even have enough money left to buy a five-hundred-dollar “preowned” lemon to get her to and from whatever job she’d manage to find back in the States.

She could try to start again, try to make a go of a modeling career from scratch, but the reality was that she hated the industry, had hated it almost from the beginning, and now, at twenty-four, she was considered old in this world of the rich and beautiful, the sleek and connected. Connections that her manager/boyfriend had managed to sever irreparably.

“Honey? Are you still there?”

Alyssa jumped. She’d been sunk inside her own head so heavily that she’d forgotten her mom was on the phone.

“Mom, I love you and I promise I’m doing fine. I really appreciate the ticket home. But they’re speaking to the passengers, so I have to hang up now.”

With a little grumbling, her mother finally allowed her to disconnect her cell, though by then Alyssa had missed the agent’s message. Scanning the seating by the gate, she promptly spotted a nice, quiet corner, one with no loud or sweaty men nearby, and made a beeline for it.

A few minutes later she heard a commotion and she glanced up to see an unhappy passenger arguing with one of the customer service agents. This wasn’t anything new. Alyssa wasn’t thrilled with the delay, either, but she’d been traveling a lot over the years and knew it was par for the course.

Would the passengers rather fly in an unsafe plane? Alyssa would prefer to fly with her mind at ease, and to land the same way. Delays were never fun, but she wasn’t going to argue with people who knew a lot more about the airplanes than she did.

When several other people surged around the guy who’d gone ballistic—his voice was rising by the minute—and gained the “courage” to yell at the agent along with him, Alyssa tried not to watch. But it was like passing a wreck on the freeway. You knew it was ridiculous to slow down, but no matter how much you lectured yourself not to twist your head, it just seemed to happen.

As Alyssa focused on the clamor, she felt the air stir next to her as someone sat down. No rank odor assailed her, so she didn’t pay attention to her new neighbor; she was busy watching two policemen walk to the customer service counter. The noise finally began dying down when the officers told the passengers that the next person to cause a problem would be escorted off the premises.

Nothing more to see there. She turned her head idly and then started in surprise; her eyes surely widened to the size of small saucers. Sitting next to her was a heart-stoppingly beautiful man—and she never used that term lightly. His thick, dark hair was cut just a little longer than was conventional, brushing the top of his ears. His solid jawline and high cheekbones gave him an air of natural sophistication, and the straight, smooth shape of his nose perfected his features.

But what really caught her attention were the sultry dark brown eyes with their perfect almond shape, and thick, long lashes that most people in her former industry would pay thousands of dollars to acquire. The man was positively delicious, which sent an instant shot of awareness through her stomach. And she had no business gazing his way.

Something was making him unhappy. His flawless lips were clamped in a straight line and his eyebrows bent inward in a scowl. When Alyssa finally exhaled, she found herself sitting up a little bit straighter. His scent was now dancing inside her, and—mmmm—whatever cologne the man was wearing was meant to seduce. Meant to make women turn their heads. And it was doing the trick on her.

“Mr. Whitman, is there anything else I can do for you?”

Alyssa turned to find one of the airline’s agents hovering around her compelling neighbor. The name was familiar, but she couldn’t place it.

Wow! He was an unhappy man.

Alyssa decided that staying silent would be the wisest course of action. But she had never really been the silent type, and for some odd reason, this stranger’s disgruntled mood made her feel less sorry for herself. It looked as if his day was going worse than hers. And that was saying a lot.

“I’m so sorry about the delay, Mr. Whitman,” the agent said. “We’ll be boarding within the next twenty minutes.” When he didn’t respond, she shifted on her feet before shuffling away.

The man’s cold dismissal would make anyone uneasy. The little show that had just taken place told Alyssa that she should stand up quietly and find another seat. But she wouldn’t. Not when she was suddenly so entertained right where she was.

The man was retrieving his laptop from his computer bag when the device slipped and he jerked his hand out to catch it; in the process, his elbow leapt over the armrest separating him from her and jabbed her in the ribs. She couldn’t help giving out an oof of pain.

Melody Anne is the New York Times bestselling author of the Unexpected Heroes series—a spin-off of her wildly popular Billionaire Bachelors novels featuring the handsome Anderson men—as well as the Tycoons series and the Surrender series. She lives in the Pacific Northwest.