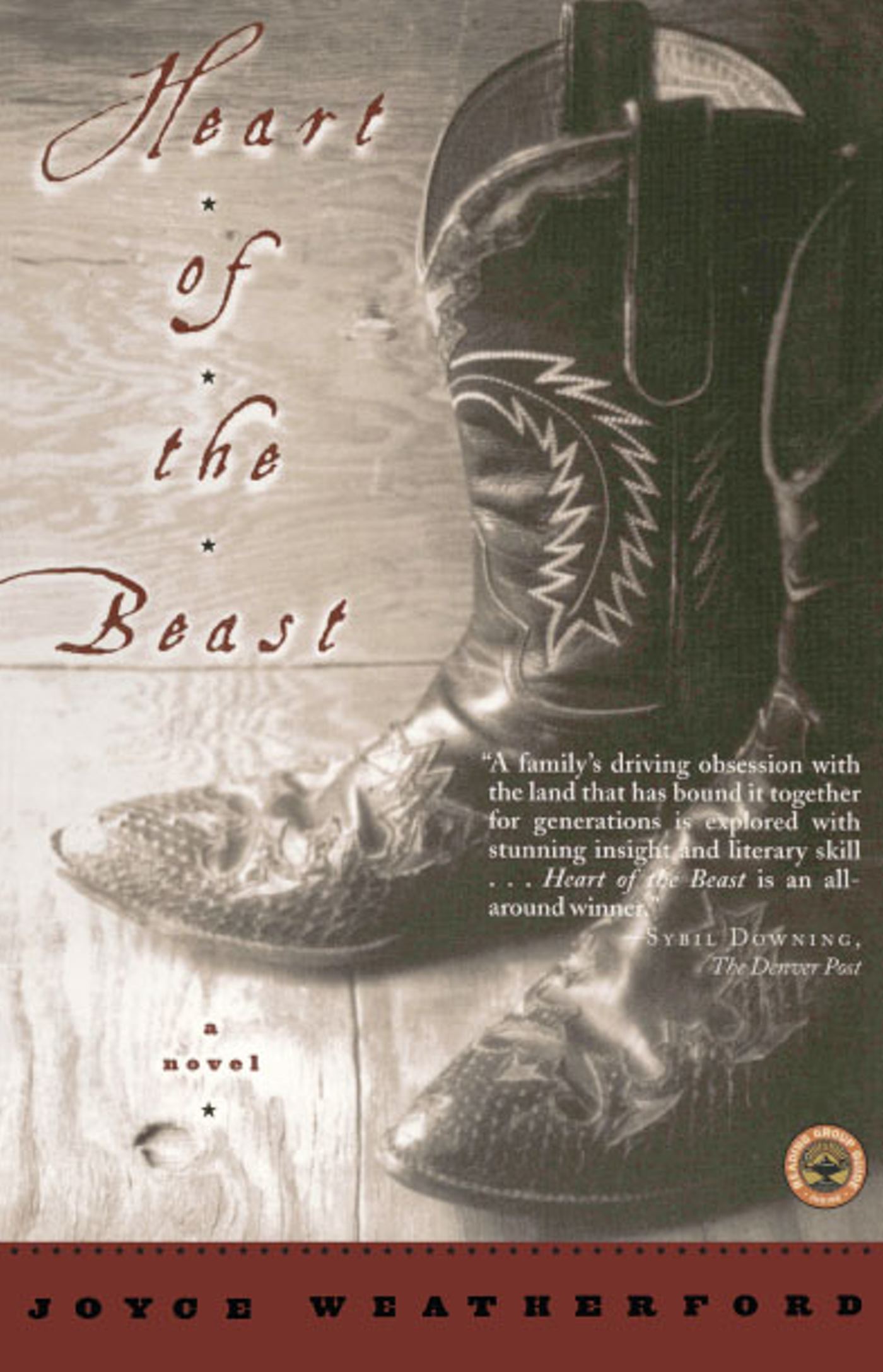 Heart of the Beast

In her remarkable debut, Joyce Weatherford writes with raw power, muscular beauty, and firsthand experience about life in the twentieth-century American West.
Bringing us to the golden plains of northeast Oregon, Joyce Weatherford presents the saga of the Steele family -- a family built not on love but on farming. Twenty-eight-year-old Iris Steele has inherited the 150-year-old family ranch and all the debt that goes with it -- a legacy, all in all, she is not certain she wants. It is the ranch where Iris has spent her life, where she grew up herding cattle and harvesting wheat, and where her brother and her father both died. It is also, it turns out, the land once owned by the Nez Perce Indian tribe, and suddenly the modern Nez Perce are suing to reclaim what they say is rightfully theirs.
To save the ranch, Iris must spend months untangling generations of family history to understand the land's legitimate ownership -- a process that unearths not only her family past but also the history of the American West and two hundred years of tortured relationships between homesteaders and Native Americans. Meanwhile, she is fighting to manage a new wheat crop, broken machinery, and her ever-fragile romance with her childhood friend, the local farmhand-turned-doctor. And as the truth of the land's ownership begins to emerge, so do surprising realities about the Steele family -- such as the startling stories behind the deaths of Iris's father and brother, and her aunt's institutionalization. In the end, Iris realizes she has inherited not just the land but its history as well, and that it's a history from which she must break free in order to discover love, forgiveness, and who she really is.
Joyce Weatherford demonstrates an astonishing control of language, combining unflinching descriptions of ranch life with the sensuous beauty of the Oregon landscape, communicating such vivid physical detail that we feel we are right alongside Iris in the corral, in the field, on her horse. She conveys perfectly the danger, the suspense, the awe and energy in those moments when man meets, battles, and harnesses nature: fighting wildfire; harvesting grain; chasing runaway horses; hunting coyotes from a beat-up propeller plane; herding, branding, birthing, and castrating cattle.
Heart of the Beast is a portrait of the relationship between the settlers of the Pacific Northwest and the region's indiginous people, of the demise of the family farm in the face of corporate agribusiness, and of the redemptive power of forgiveness. Part romance, mystery, courtroom drama, and American history, this is a family saga of epic power and importance.

A SCRIBNER PAPERBACK FICTION READING GROUP GUIDE
HEART OF THE BEAST
DISCUSSION POINTS
1. Heart of the Beast opens to Iris's disturbing and bloody dream of the Nez Perce Indians and concludes with her father's violent death. What other violent images and scenes do you remember from the story? What do these scenes tell us about this land, this life, and this family? What does the calving scene illustrate about the relationship between Iris and her mother, and, likewise, what does the branding and castrating scene show about Ike and his children?
2. Farming has often been portrayed in literature as the work of men against an implacable earth. In this novel, the farmland is often portrayed as feminine: on page 7, we learn that the family farmed by the cycles of the moon; on page 8, the ground lies "vulnerable, carvable, and pliant," and later, the "gold grain rushed into the bin the way a mother's milk comes in a while after a baby is born." How do these and similar images shape our perception of the land and the act of farming? What do they say about Iris as a single woman running a farm on her own?
3. The novel revolves around the question of whether Iris and her family are the rightful owners of the property they call Heart of the Beast or whether the land belongs to the Nez Perce. Were you surprised by the way this issue was ultimately resolved? Was the decision fair? Who do you believe the land belongs to, and what would you have done in Iris's position?
4. As her mother approaches death, Iris is charged with caring for her as if she were an infant. Have their roles reversed or stayed the same during this time? How were these two strong women different, and what did they have in common? Given more time, do you think they would have grown to value each other more?
5. Discuss the concept of legacy. Aside from the property itself, what legacies have been passed down in Iris's family? Are family legacies a kind of fate? Can they help Iris -- and us -- grow, or are they more like weights around our ankles?
6. As she takes in the harvest, Iris reflects, "With each day, I felt the dirt in handfuls landing on top of me. I was disappearing; the land was taking me over. I began to look like it, my skin turned dull like earth, my fingerprints rubbed out, obscured by dust" (page 52). What is the significance of this statement? Do you think that the land is literally burying her?
7. Iris has always hated the sculpted busts of her family members, and has always wanted to get rid of them. What do these busts symbolize for Iris and for the story as a whole? Do you think she made the right choice about them in the end? What does her decision imply about her future relationship with her family's history? At the end of the book, Iris looks at the sculptures of her parents and sees them in a more positive light. Have they really become better people or is it just that Iris understands them better in her heart and mind?
8. Iris's aunt Hanna is strikingly different from the other members of her family. What makes Hanna unique? What does she have to offer Iris?
9. On page 207, Iris thinks, "Children bothered me. In fact, I loathed them....It was more babies that made me sick....Women and children never worked out." Where do you think this aversion comes from? Do you think her feelings are set in stone, or are they likely to change? Do you think Iris actually hates babies or hates and fears a vulnerable, small, immature part of her own self?
10. Tansy's arrival breathes fresh life into the farm. How does she change Iris, and what does her presence signal about the family's future? Were you surprised that she chooses to remain on the reservation? What is the importance, if any, of Tansy, who is both white and Indian, ending up owning Heart of the Beast?
11. Do you agree with Iris's decision to stay on the farm, even after the successive deaths of her brother, father, and mother? Is she trapped by her family's land? Empowered by it? Neither? While helping Tansy settle in, Iris realizes that "everything of my dead family was still in the house" (page 271). How is this true of more than just their personal effects? Why hasn't Iris cleaned house?
12. On page 296, Iris tells Henry, "I'm not bleeding. But I'm dying as much as anyone." What do you think she means?
13. Reread the story (pages 305-6) that gave Heart of the Beast its name. What does this legend mean to you? What can the story tell us about the Nez Perce, about Iris, and about America?
14. In the beginning of the novel, Elise tells her daughter that water will never rise above its source. It is only at the end of the book that we finally see the first image of rain and moisture rising. What message does this image leave us with?
Joyce Weatherford

Sybil Downing The Denver Post A family's driving obsession with the land that has bound it together for generations is explored with stunning insight and literary skill...Heart of the Beast is an all-around winner.

Elizabeth Strout author of Amy and Isabelle This is a story that is large and brave, told in a voice that dares to linger on the details of both the beauty of the landscape and the dangers of a family's inner terrain.

Heart of the Beast